The joy of walking

On Sunday, August 24, 1947, a young woman named Diana Athill boarded a train in London, bound for what Brits alone still call “the continent”.

She travelled over the sea, made a rush across Paris, and then a endured a long traipse through France. A brief stop: for a bath in Milan, naturally. Then, forty hours later, at midnight on August 25, she arrived in Florence. The trip had been a present from her aunt, to celebrate the end of the Second World War. “Keep a diary,” her mother said. So she did.

From A Florence Diary by Diana Athill

Whilst some aspects of Athill’s diary recall a time long gone by, I recognised much about Florence in her account: how the sky filled with a “sudden descent of finches” and the frescoes “glowed like ripe peaches”. Like Athill, I too arrived in Florence after escaping London, “hungry for the thrill of being elsewhere”. I too revelled in the joys this city reveals by walking.

The first joy of the flâneuse, the urban idler, is to go wherever she desires. In Lauren Elkin’s recent book Flâneuse, she discusses how walking, for a woman, has often been a radical act. “The flâneuse does exist, whenever we have deviated from the paths laid out for us, lighting out for our own territories,” she says. “She is a determined, resourceful individual keenly attuned to the creative potential of the city, and the liberating possibilities of a good walk.”

Athill did just that. After years of wartime confinement, the experience was, she recalls, revelatory. On her first morning in the city, she recorded in her diary that she “wandered, mostly looking at the Palazzo Vecchio. Everything is so beautiful that even not ‘doing’ anything special is marvelous“.

During my first weeks in the city I wore down my shoes by walking, although I had nowhere particular to go. I discovered that if you wind your way from Le Cure to Fiesole, the path you choose on one occasion will be impossible to find the next time you return. Climbing upwards, the long, narrow roads have seductive bends and, passing by secretive gates in high stone walls, you cannot be sure precisely where you are. A friend told me one route to the top is formed by a “pavement” of lush grass, with the slope falling away on either side. It still eludes me.

Athill fell in love with Fiesole too. After escaping the city for an afternoon, she announces that she and her cousin have “decided to buy a villa up there, with an olive orchard and some vines and a couple of fig trees, and have all our friends to stay”. For sometimes, the joy of walking is wondering where you might stop.

Yet it is also a joy to know that, relying on your own two feet, the choice is yours: to move or be still. “We got a permesso for the Boboli gardens and meant to rest in them,” Athill recalls, “only we were continually led on by new and wonderful vistas.” When all paths are filled by the curious or the beautiful, the Florentine walker is spoilt for choice.

Beyond the frustrations of public transport, walking in Florence is a practical endeavour. It is “mapping with your feet,” says Elkin. “It helps you piece a city together, connecting up neighbourhoods that might otherwise have remained discrete entities.” But the greatest value of walking is that it “paradoxically, allows for the possibility of stillness,” Elkin observes. One foot in front of the other, onwards and upwards, walking allows you to rediscover the joy, rather than torment, in wondering, as Kerouac does, “what’s in store for me in the direction I don’t take?” 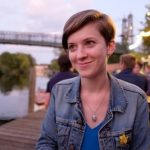 Ellen is a writer and journalist based at the European University Institute in San Domenico di Fiesole. Raised in Edinburgh and the Scottish highlands, she moved to Florence in 2016 to escape the London treadmill. She loves the great outdoors, everyday adventures and tiny houses. She is also editor of TheStrix.com. Follow her on Twitter @ellen_halliday.