For several months between the end of 2016 and early 2017, the fountain on the outer edge of piazza Santa Croce bordering via dei Benci, opposite Palazzo Cocchi-Serristori, was hidden by four large scaffolding panels decorated with street art versions of famous Renaissance paintings embellished with additional elements recalling the football matches in costume that are held in the piazza every year. The scaffolding was to protect the 17th-century fountain while its most recent restoration took place, funded thanks to a love story and one of the most lavish weddings Florence has ever seen. 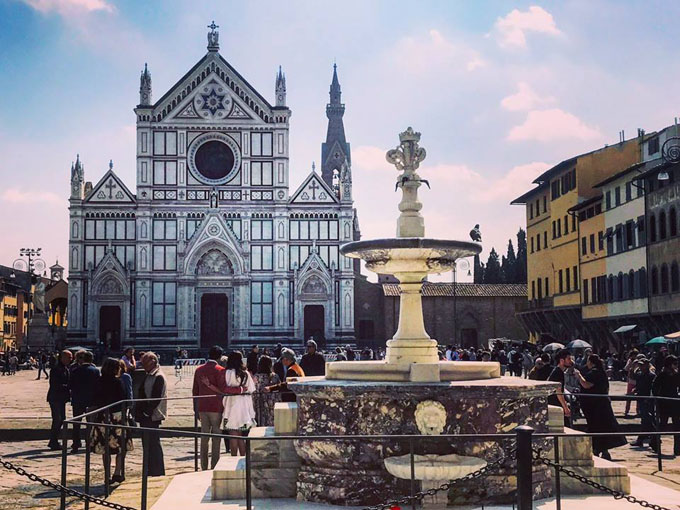 On November 27, 2015, at the culmination of three days of sumptuous celebrations, the fairytale marriage of the son of Indian millionaire Yogesh (“Yogi”) Mehta, Rohan and his bride Roshni took place in piazza Ognissanti. Only disappointed that Rohan could not, for health and safety reasons, arrive at the ceremony by elephant, the groom’s father, whose personal fortune is said to top 665 million euro, paid for it all. Mehta is the founder of the Petrochem empire, based in Dubai, with offices in Mumbai, Antwerp and London, as well as in Singapore and China. The marriage cost the entrepreneur an estimated eight million euro. About a third of this money went into the coffers of the City of Florence as payment for the use of public land and as tourist taxes generated by the 500-plus wedding guests staying in luxury hotels around town, whilst an additional 58,000 euro was earmarked to restore the fountain in piazza Santa Croce.

In 1609, the Medici grand duke commissioned Pietro Tacca, who later sculpted the two bronze fountains in piazza Santissima Annunziata and the Porcellino fountain at the Loggia of the Mercato Nuovo, to design a fountain for piazza Santa Croce. It was to depict a centaur featuring Deianira, the hapless wife of Hercules, and to stand where, according to Stefano Bonsignori’s Map of Florence, a public wash trough already stood in 1584 outside the San Simone Gate. Although Tacca’s fountain was never completed, recycled stone found on the site was used to construct an early version of a fountain in 1639. But it was not until 1673 that Pier Maria Baldi (1630–86) drew up a more permanent project for the fountain in pietra serena—Baldi had trained under Ferdinando Tacca, Pietro’s son, and was chief architect to the court of Grand Duke Cosimo III.

Because of the deterioration of the pietra serena, a new, more solid restoration of the fountain was needed. At the beginning of the 19th century, two proposals were presented, one in 1810 by Giuseppe Del Rosso (1760–1831) and another, in 1815, by Giuseppe Manetti (1761–1817). It took until 1816, however, for the structure to be restored in the form we see it today. Based on a new proposal closely following Baldi’s original design, the director of works, Giuseppe Del Rosso, architect to the city, used the stronger and, at the time, more traditional polychrome marble for the fountain, something that would be repeated in the Basilica of Santa Croce’s revamped facade several decades later. Resting on an octagon of pietra serena reached by steps up from the level of the piazza, another octagonal crushed marble base is fitted inside it. On two sides of the base, there are two shell-shaped basins to collect the water flowing from the mouths of two lions; the water comes from a small basin higher up supplied by protruding spouts near the top of the fountain. From there, a marble stem rises up that bears a trefoiled Florentine lily capped with an elegant grand ducal crown.

Badly affected when piazza Santa Croce was inundated by the 1966 flood, the fountain required repair once the silt and oil-filled water receded. This work was carried out by a group of primary school teachers in memory of the educationalist Pietro Dazzi (1837–96), who mentioned in his writings that he had often drank at the fountain as a young boy. A teacher, writer of school books and member of the Accademia della Crusca, Dazzi founded the People’s Schools in 1866, schools for working class boys where volunteer teachers taught reading, writing and arithmetic to their less privileged students on Sundays. Pupils were given books and paper to write on and lessons also included instruction on morals and citizens’ rights. A plague commemorating Dazzi and his work can be seen at via Verdi, 6, where he lived for many years.

In the years leading up to this latest restoration financed by the Indian benefactor, the fountain had long since ceased to function, was degraded and the railing around it used as anchorage for a myriad of bicycles, which were locked to it to prevent them disappearing. Now, after such a beautiful and expensive makeover for the Santa Croce fountain, it would be a travesty to allow the clock to be turned back.