The enchanted street: via San Niccolò

Although I had been coming to Florence on and off for a decade and had lived in the city for more than six months before I discovered it, it is safe to say that the few streets that make up its prettiest corner, San Niccolò, changed my life.

In the summer of 2000, after months contentedly ensconced with my family in an airy flat on the via Romana, I happened upon a flyer advertising the city’s initiative to open privately owned gardens to the public over a certain weekend, for free. The idea was enchanting and irresistible; as even the most casual visitor soon observes, Florence is a city of austere facades that offers only the occasional enticing glimpse of the green and gold gardens and elegant courtyards behind. So for a day we wandered happily under wisteria and jasmine through the private spaces of palaces on the via Santo Spirito and via Maggio. And the last garden on my list belonged to the Casa Fallani, in the heart of San Niccolò: where the via San Niccolò meets the Porta San Miniato.

Odd though it may sound, I had never turned right at the Ponte Vecchio on my daily meanderings from the via Romana: with four children to feed (and several of them usually also trailing behind me), we stuck to what we knew: the covered market at San Lorenzo, the Boboli (not yet arterially connected to San Niccolò by way of the lovely Bardini gardens), a visit to the Bargello or the bus to Fiesole where my husband was working at the EUI. That day the children, looking on the map at the length of the via dei Bardi, decided they were too hot and tired for the trek; I havered, then decided I would go alone.

It is hard to pinpoint where the magic begins; the first stretch of the via dei Bardi is grim and uncompromising, dusty with traffic (and at that time heralded by a derelict porn cinema, the 1950s Arlecchino). But then there comes a brief glimpse of the Arno, and the road forks: leaving the river and turning down the lovely curving length of the via dei Bardi proper a piece of crumbling wall comes into view, soft in evening sunshine, overhung with irises gone wild. On that summer day I felt as though I had left the hot, bustling city behind, and all its noise and tourists, for this cool, tall, enchanted street, completely empty and quite ravishing. A breath of deliciously cold air creeps up from the basements of silent lofty palaces, and then comes the scent: the subtlest wafts of lime blossom from the great row of trees on the piazza Demidoff still invisible but up ahead, and the enchantment is irrevocable.

On that day the garden itself of the Casa Fallani was a revelation: I haven’t seen it since but still have the clearest memory of it, not least because it started my writing career: it was the inspiration for my first novel, A Party in San Niccolò. The Casa Fallani is tucked in on the corner near the Porta San Miniato opposite the lovely plain façade of the church of San Niccolò, and the garden it conceals slopes steeply uphill to what remains of Florence’s massive stone medieval wall.

I passed below the house through a large but unspectacular (by Florentine standards at least) carriage gate. There was a low vaulted tunnel, cool and whitewashed, that opened on to a tiny formal garden with statues and topiary: a few stone steps upwards and suddenly the scene changed; here was a little fairy wood, dim and dusty, a path threaded between the gnarled trunks of little holm oaks and knotted with roots underfoot, odd and magical. No sooner had my eyes adjusted, though, to this transformation than another one occurred and a marvellous light came into view uphill, reflected off the stone of the old wall that towered over the garden. The wood gave way to a wide soft grassy path under the wall, arcaded with fig and almond trees, scented and glorious. This was Florence, but not as I had ever known it, this was a place secretive and magical, not forbidding and austere but ravishingly sensuous, dappled with sunlight and shade, green and gold: half countryside, half ancient city. This was San Niccolò.

A few months later I was back in bracing, chilly, distinctly unmagical England, in Cambridge its enlightened rational and rather damp heartland. Unable to forget that golden afternoon, I began to write: the only thing I knew was that the novel would end in that garden, and it did.

The novel sold surprisingly well for a first novel and when, a couple of years further on and still pining for Florence, we tentatively wondered if we might dare to buy some tiny bolthole in the city, one of the four properties that seemed—at a very tight pinch—to be within our budget was a top floor wreck on the via San Niccolò. It was small and narrow and long, its roof had fallen in, its window frames were rotted, and its bathroom was a 30-year-old horror of rusted taps and orange tiles.

But when I walked through its enfilade of oddly cited rooms, each with a roof slanting a different way and emerged at the end to a view of the flank of the church of San Niccolò and the belltower where reputedly

Michelangelo had hidden from the French during the siege of Florence, I was in love.

We don’t live year-round here, but whenever we return, separately or en famille we feel welcomed.

Giuseppina Culello (at whose grocery the Bottega delle Chiacchiere we bought our first supplies) and her son Alberto Navari still wave as we pass carrying our suitcases on arrival or departure, although they have now transformed their premises into the chic and much-lauded gourmet wine bar Zeb. My daughters still buy pencils and paper at the tiny cartoleria in the church’s shadow, and in the most sweltering days of August we can slip out through the Porta San Miniato to dine in the deliciously cool garden of the Beppa Fioraia.

San Niccolò might have grown busier and more elegant in the 15 years we have been settling ourselves here, but its magic is undiminished: it is still a place of green shade, glorious vistas and secret corners, a tiny hidden miracle tucked in below one of the most famous panoramas in the world.

Christobel Kent was born in London in 1962 and educated at Cambridge, where she now lives with her husband and five children. She has also lived in Modena and in Florence, and spends part of every year in her home in San Niccol?. 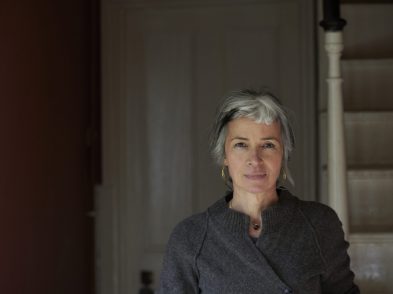 A homecoming for Sandro Cellini: “The Viper”

We’ve all been locked down, to one degree or another, for most of this year. From my nice house in the English countryside, I have felt awestruck by the courage, ... 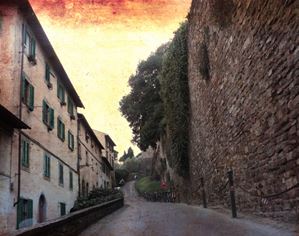 Italy was my way into writing: I’d always wanted to do it but never felt brave enough—or felt I had anything to write about. Until returning from a year in Florence, with nothing you could call a career under my belt (ten years in publishing followed