If you’ve ever eaten in San Niccolò, likely it was a hearty Florentine affair among amici at the Osteria Antica Mescita. On the table a fiasco flowing with rough-around-the-edges red wine, the sort that makes Florence living tantalize like the Holy Grail. Mescita is a Tuscan word with an etymology worth wandering into. 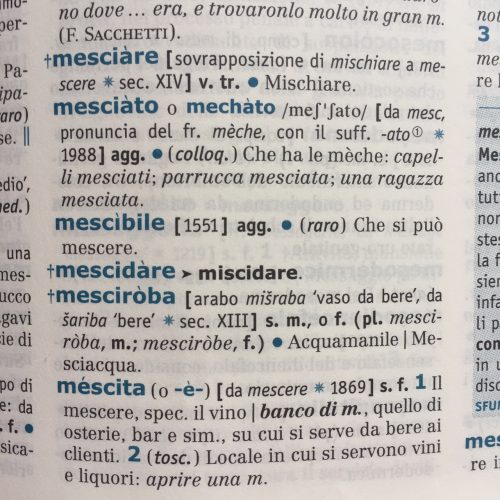 In its verb form, méscere comes from the Roman custom of mixing wine with water to make it less treacly. (Back in ancient times wine was believed to have been sweet, sticky and strong. Perhaps we will find out more soon thanks to the recent discovery of a 6,000-year-old wine jar in Sicily). It conjugates like this: io mésco (I mix), tu mésci (you mix), past participle mesciuto.

A worthy word in Italian literature, Torquato Tasso embraced it in his great epic poem “Gerusalemme Liberata” dating to 1581, in which the “mesce” is often translated as “vomited” or “gushed” as sulphur and bitumen is “mixed” by Mount Etna, cited as a “magician”: Mesce il mago fellon zolfo e bitume. Ugo Foscolo made reference to the mixing of colours and aromas in his unfinished 1827 poem “Le Grazie” (splende il concento / Che di tanti color mesce e d’odori) and Alessandro Manzoni inserted it in his 1843 tragedy “Adelchi” (Ne’ guardi, ne’ volti confuso ed incerto / Si mesce e discorda lo spregio sofferto / Col misero orgoglio d’un tempo che fu—He looked at it, turned toward it confused and uncertain / A discordant mix of contempt suffered / With the miserable pride of a bygone time).

Ludovico Ariosto put a whole other spin on the word in his 1516 seminal epic poem “Orlando furioso”, an allusion to attack, battle and the mischia (melee) that ensues: E si mesce aspra e sanguinosa guerra. Dante also had something to say on the mescere matter of course; in the Paradiso cantica of his Divine Comedy the Supreme Poet throws us a cultural curveball in Canto 17 by using the term in reference to a thirst for knowledge: perché t’ausi / A dir la sete, sì che l’uom ti mesca, which is beautifully rendered in The Harvard Classics 1909–14 translation: Not that aught thy words / May to our knowledge add, but to the end / That thou mayst use thyself to own thy thirst.

Highbrow literary references aside, impress your Florentine friends next time you go round for dinner. “Dai, mesci abbondantemente!” (Go on, pour me a big glass of vino!). Or if it’s a school night and you’re trying to behave, “Vabbè, mescimi ancora mezzo bicchiere” (Oh, all right then, pour me a bit more). All this language practice can take place while mescendo le carte, dealing out the cards for a game of scopa. At your local bar, wow the waiter with the words “ci dà due mescite di vin santo?” while standing at the banco di mescita, the counter on which the mescitore pours your sweet digestif.

An archaic nomenclature steals the scene along largo Bargellini (number 16R to be precise), the narrow street left of Santa Croce’s façade channelling tourists towards the Scuola di Cuoio. For years I have wondered what the cànova of wines etched in uppercase lettering meant. Dictionary research reveals that it comes from the Latin canaba meaning a wooden hut and later a cellar. (In Venice, a cànova was a salt warehouse, according to Zanichelli’s Lo Zingarelli.)

Still in the Santa Croce neighbourhood, mescita as a place of action extends to coffee and milk. At via Pandolfini 21R you can find a former shop sign where both staples were once poured, maybe with a mescola, Tuscan for ladle. “Antica Cascina di Dario Peruzzi. Latte, panna e burro. Mescita di caffe e latte,” reads the time-tested plaque on the ochre wall. (Graphic designers will love the typeface!)

Tuscany sadly only has a couple of mescite left: in San Gimignano there’s Enoteca Gustavo Mescita Vini, a tiny touristy hangout with marble-topped tables, tomato-topped bruschetta and a decent selection of local wines. In Borgo A Buggiano, a ten-minute drive west of Montecatini Terme, there’s La Mescita, an enoteca that brings in the locals during happy hour.

But back in Florence’s San Niccolò, at the former customs house, once a bona fide Chianti checkpoint, wine flows “untaxed” from midday to midnight. Standing guard over a Romanesque crypt in its cellar, Osteria Antica Mescita also stands guard over the last remaining mescita in the Tuscan capital.