There’s a pocket-sized enoteca in NYC’s “the Village” that serves Italian wines by the glass: its name is Gottino. In Pontassieve, my hometown that regularly sleeps, miniscule pizzeria Da Sandrino opens dinner play with a Tuscanlicious grazing board of cold cuts, crostini and a gottin di vino. Never one to shy away from vinous discoveries,  I ordered it once, swiftly followed by another larger glass of the red stuff.

Gotto is the root word and the Accademia della Crusca, protector and preserver of the Italian language, informs bibliophiles that this word, meaning a type of drinking glass, comes from the Latin guttus, or Greek correspondent κῶθον. The online lexicography source is prompt on the pronunciation front too: the “o” is open, expansive and longing for length.

Born in 46 BCE, Greek biographer and essayist Plutarch was the first to pen the term in his Parallel Lives recounting the noble deeds and characters of Greek and Roman soldiers, legislators, orators and statesmen: “E dietro a quelli venivano altri, che portavano coppe, gotti, bicchieri d’ariento di bellissima opera” (And after them came others, who brought cups, glasses, silver glasses of beautiful workmanship.)

Next up for a sip of the gotto was Florentine poet Domenico di Giovanni. Better known as Il Burchiello, the son of a carpenter father and spinner mother wove a new web in Italian poetry through the previously unheard-of use of paradox and the absurd. “Porta un boccal di vino, e quattro gotti” (Bring a tankard of wine, and four glasses), he wrote in his fifteenth-century sonnets.

Gotto even acquires medicinal importance thanks to a passing mention by one of the world’s greatest biologists. Francesco Redi, after whom the main road leading to Novoli is named despite his Arezzo alpha and Pisa omega, admits his love of wine: “Se giammai n’assaggio un gotto, Dite pure, e vel perdono, Ch’io mi sono un vero arlotto” (Say we never taste a glass, just say, and I will forgive you, Say we are true gluttons). Published in 1685, Redi’s collection of poems Bacco in Toscana is considered among the finest works of 17th-century Italian poetry—the Grand Duke of Tuscany Cosimo III awarded him a medal of honour for the dithyramb, a hymn sung and danced to Dionysus, the god of wine and fertility.

Rare in Tuscan conversation, farther north in the land of Valpolicella and Prosecco you might hear Venetians camped out in a campo during the aperitivo hour, exclaiming “beviamoci sopra un gotto” (Let’s have a nice big glass of wine). The gotto was once a unit of measurement in Venice, the equivalent of 19 decilitres prior to the adoption of the metric system. In sailor speak, it was also the vessel in which bilge water was stored, collected with the gottazza, a sort of wooden spoon. Aggottare—bailing out—is always an option when life becomes too much to bear.

But, for now, bag your Mobike, pedal under Porta alla Croce and grab your gotto along via Gioberti. At Il Gottino Bar à Vin, in Florence’s East End, glass size thankfully isn’t an issue. This voguish but verace hangout flaunts a cross-section of city life in its copper cube seating area, compressed with tiny two-person patio tables. The wine’s good, la vita è bella, and the gottino’s great.

What I tasted this month 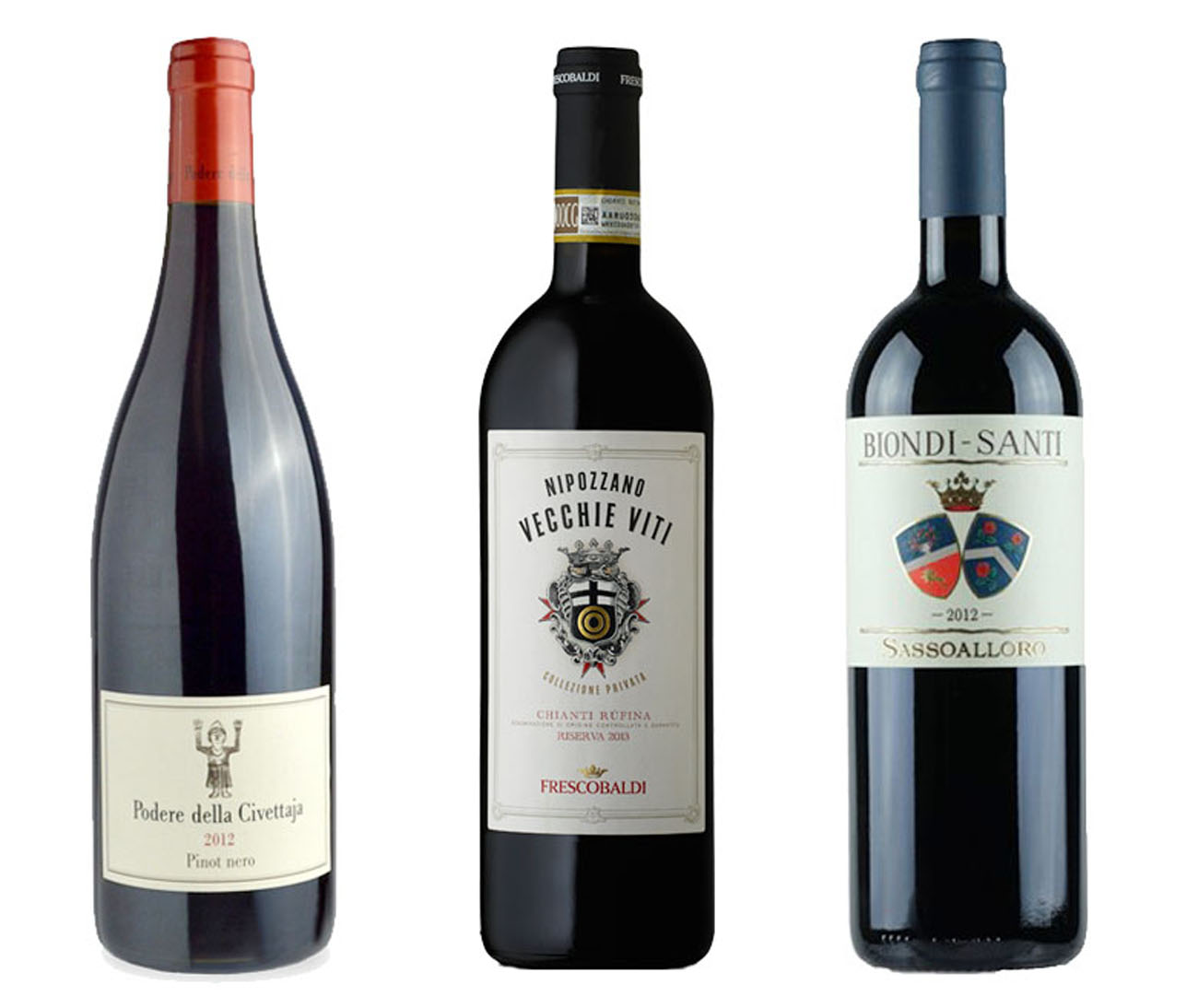 Podere della Civettaja Pinot Nero 2014
A Pinot Nero from Tuscany, yes, from Tuscany. Open, pour and wait: the longer you manage to keep it in your glass, the more it will reveal itself to you. An extraordinary accomplishment of scent and sexiness by winemaker Vincenzo Tommasi from Pratovecchio, in the mountaineous Casentino area.
Where to find it in Florence: Calistro, lungarno Cellini 43R

Frescobaldi Nipozzano Vecchie Viti 2013
A wine that has sentimental sedimentation for me: Nipozzano is where my husband proposed to me. Bergamot and moka coffee on the nose, raspberries, lingering liquorice and a hint of gin and tonic on the finish. The older the vines, the better the wine: it’s an adage, but here it’s the truth.
Where to find it in Florence: Dei Frescobaldi Ristorante and Wine Bar, Via dei Magazzini, 2-4R

Jacopo Biondi-Santi Sassoalloro 2012
First things first, forget the hallowed Biondi-Santi Brunello Riserva from Montalcino’s Tenuta Greppo. Fathomless ruby red when poured, this whole other beast from Montepo Castle, in the Maremma, is smoky, spicy and gorgeously wild without lacking any of the noblesse oblige.
Where to find it in Florence: Signorvino, via dei Bardi 46R