Every year, thousands of people from all over the world visit piazzale Michelangelo to take photographs of the spectacular view it gives of the bridges over the Arno river and Florence’s major landmarks, from Forte Belvedere to Santa Croce basilica, encompassing Ponte Vecchio, the Duomo, the Uffizi, the Palazzo Vecchio, the Bargello museum and the spire of the Badia Fiorentina as well as the hills of Fiesole and Settignano in the background. Tourists and locals have the Florentine architect Giuseppe Poggi (1811–1901) to thank for this breathtaking and unforgettable vista. As the main artifice of the radical redevelopment designed to enlarge and aggrandize the city so it could better perform its role as capital of the recently united Kingdom of Italy, Poggi’s massive urbanisation project took him five years, between 1865 and 1871, to complete at a cost of 30 million lire raised through a public loan to be repaid within 50 years. 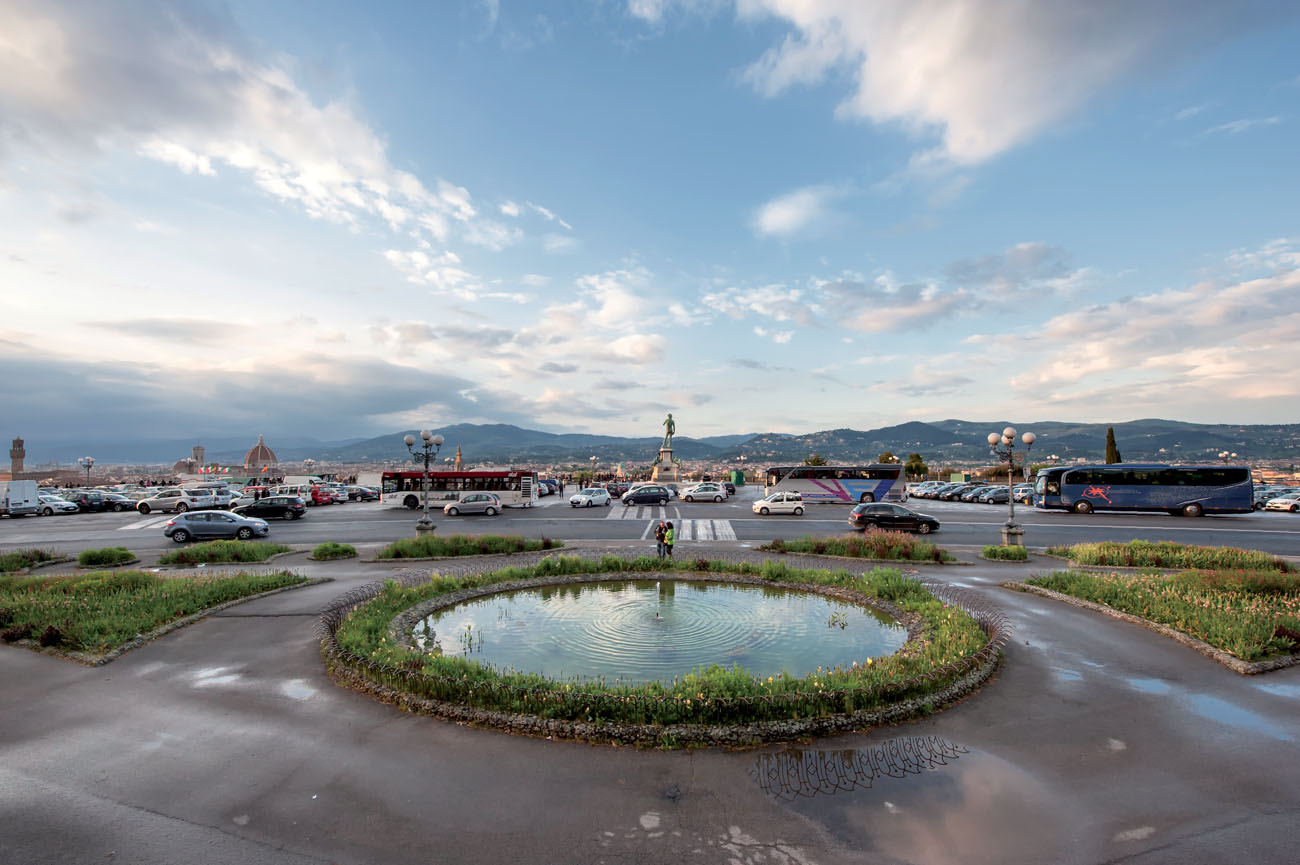 Poggi’s mandate was to provide housing and services for the influx of people coming to Florence to work in the capital’s ministries; to give the city the modern appearance of a European capital; to protect it from the Arno when it flooded and, despite the massive expropriation required for the project, to prevent speculation. On the river’s south side, he drew up the viali di Circonvallazione, the boulevards skirting around the centre, which he built by tearing down the remnants of the third circle of Florence’s medieval walls. However, he left Porta al Prato, Porta della Zecca Vecchia and most of the other old gateways to the city standing and added new squares such as piazza Beccaria and piazza della Libertà, also saving the “English” cemetery in piazzale Donatello, isolating it by diverting the roads around it. He also planned the “lungarni”, the roads running alongside each bank of the Arno as it winds through the city.

On the north side of the river, Poggi’s masterpiece was viale dei Colli, the eight-kilometer stretch of scenic road, crowned at its summit by piazzale Michelangelo. There, he had foreseen in what is today La Loggia restaurant the site for a museum of the works of Michelangelo, who had built the fortifications around the nearby San Miniato church as part of the city’s defenses at the time of the Holy Roman Emperor Charles V’s siege of Florence in 1529. Sadly, Poggi’s dream “to construct almost a gallery for Michelangelo, as in other times a gallery was built for Galileo” was never realized.

To ensure the stability of the piazzale, Poggi engineered a set of ramps leading up the steep hillside from Porta San Niccolò. In the centre of the piazzale the monument standing on a wide base of steps is a bronze copy of Michelangelo’s David. In 1846, after the original marble David was moved indoors from the steps of Palazzo Vecchio to the Accademia Gallery, Grand Duke Leopoldo II commissioned sculptor Clemente Papi (1803–75) to make a plaster cast of Michelangelo’s statue from which all subsequent copies stem. Until 1866 a series of technical difficulties initially made it impossible to cast a copy in bronze. Once this became possible, the exceptional copy was presented at the 1867 International Exposition in Paris, although on its return it was not thought chromatically suitable to be placed in piazza della Signoria. Therefore, in 1868, the government gifted it to the City of Florence to do with it what it chose. And so, the City decided to return to Poggi’s initial idea to pay homage to the great artist. In 1872, to decorate the four corners of the monument, Clemente Papi cast the bronze copies of what Michelangelo called his “allegories”, later identified by Benedetto Varchi in 1549 as Night and Day, Dawn and Dusk, the marble originals of which are in the San Lorenzo basilica.

It took nine pairs of bullocks to pull the cart transporting the statue to the piazzale, so it could be assembled for its inauguration on September 13, 1875.

In a manicured strip of garden stands a fountain in front of the neoclassic loggia. There, a brass plate on the terrace wall beneath it reads “Giuseppe Poggi Florentine architect / look around you / here is his monument / 1911”.

Today, it is hard to imagine that the piazzale was once an important hub for Florence’s first tramway system in operation starting 1879 until it was dismantled in 1958. From 1906, the number 13 tram traveled the circular route from piazza Duomo, over Ponte alle Grazie to piazza Ferrucci and up viale Michelangelo to its terminus in via del Gelsomino and back.

Piazzale Michelangelo is also close to Florentines’ hearts as it is from there, with few interruptions since the early 19th century, that the Società di San Giovanni Battista has launched its fireworks display every year in celebration of St. John the Baptist on June 24, the city’s patron saint’s day.