The statue of Ubaldino Peruzzi

Two statues stand facing each other across piazza Indipendenza. One depicts Ubaldino Peruzzi de’ Medici, the first mayor of Florence and a minister in the newly proclaimed united Italy, and the other captures the moderate liberal politician and twice prime minister Baron Bettino Ricasoli, both of whom were prominent figures in the bloodless coup that led to the ousting of grand duke Leopold II from Tuscany. One statue appears slightly turned to the right whilst the other leans to the left, subtly indicating that perhaps, in life, the two men did not particularly like each other. 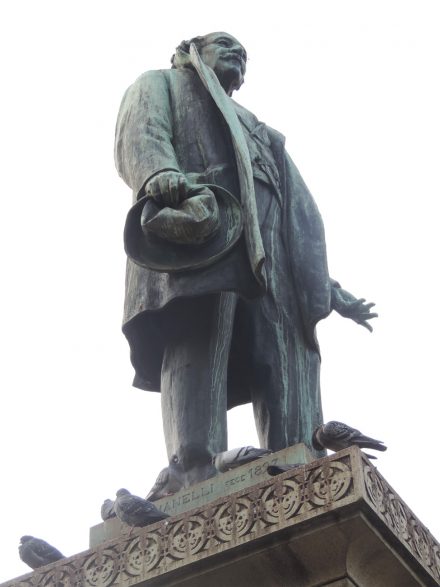 On April 27, 1898, the thirty-ninth anniversary of Leopold II’s departure was marked by a solemn ceremony in the piazza still bereft of trees, which included a choir of 2,000 school children singing patriotic songs. The Italian king, Umberto I, dressed in full military costume, unveiled the bronze statues in the presence of his wife and many foreign delegations. The work of two different artists, Ricasoli’s much lampooned likeness was sculpted by Augusta Rivalta (1835–1925), whilst Peruzzi’s was the work of Raffaello Romanelli (1856–1928). Peruzzi, in his statue, is wearing a greatcoat, a pair of narrow trousers and is holding a crumpled hat in his hand. He is depicted telling the assembled people on April 27, 1859, in what was then known as piazza Maria Antonia, that the Florentine rule of the Habsburg-Lorraine had ended.

The bronze bas-reliefs at the statue’s base display four critical events in the politician’s life: Peruzzi as captain of the civic guard, which obtained the liberation of Tuscan prisoners after the battle of Curtatone and Montanara during the First Italian War of Independence (bearing a plaque reading Innsbruck 1848); Peruzzi announcing the grand duke’s exile from Florence (April 27, 1859); Peruzzi standing in front of Palazzo Ferroni, then the town hall, communicating that Rome had fallen, marking the final defeat of the Papal States under Pope Pius IX and the unification of the Italian peninsula under King Victor Emmanuel II of the House of Savoy (September 20, 1870); and Peruzzi inaugurating the statue of David in piazzale Michelangiolo (September 13, 1875).

Thanks to his great grandfather Bindo Simone (1729–94), who had married Maria Luisa de’ Medici (1756–97), Ubaldino Peruzzi de’ Medici was born in Florence on April 2, 1822 into one of the oldest and most important families in Florence. After obtaining, at just 18 years old, a degree in law at the University of Siena and a diploma in mining engineering from the Royal School on Mines in Paris three years later, Peruzzi’s life changed when, in 1848, he was sent to Austria to negotiate the liberation of the Italian prisoners. This marked the beginning of over four decades dedicated to public service, beginning in November that same year when Peruzzi succeeded Bettino Ricasoli as Gonfalonier of Florence, a position his own banker father had held prior to Ricasoli. It was short lived as, on September 29, 1850, Leopold II removed him from this post when Peruzzi published a petition urging the grand duke to revoke a decree abolishing the legislative assembly.

Just three weeks before his dismissal, on September 9, Peruzzi married Emilia Toscanelli (1827–1900), a wealthy, intelligent woman interested in politics, the arts, literature and the sciences who had travelled widely and spoke several languages. A love but childless match, the couple lived at borgo dei Greci, 12—indicated by a commemorative plaque—where Emilia created her famous “red salon” regularly entertaining local, national and international VIPs, including Edmondo De Amicis, author of Cuore, dedicated a book to her and her salon. The couple also owned Villa La Torre in Antella, which after Emilia’s death was bought and extensively renovated by poet Robert Browning’s son.

In 1859, after the grand duke’s banishment, Peruzzi became governor of the provisional Tuscan government and was sent to Paris to seek the approval of Napoleon III regarding the union of Tuscany with the Kingdom of Italy. Between 1861 and 1864, he and his wife moved to Turin where he became firstly minister of public works (1861–62) and then minister for the interior (1862–64). Following the designation of Florence as the capital of Italy,

Peruzzi also took an active role in municipal politics and was the city’s powerful and popular mayor as well as a councillor on several occasions, up until 1878.

Involved in the scandal surrounding the bankruptcy of Florence when he was falsely accused of excessive and erroneous spending related to making the city the nation’s capital, Peruzzi dipped heavily into his own fortune and even more heavily into that of his wife to help remedy the situation. Considerably impoverished, Peruzzi abandoned local politics and the couple retired to Antella where Peruzzi died on September 9, 1891. Initially buried in the crypt of the villa’s chapel, five months later King Umberto I signed a decree authorising the interment of his remains in the Santa Croce Basilica. Ten years after her death in 1900, after a long campaign by family and friends, permission was finally granted to allow Emilia to join her beloved “Baldino” there.