After Mussolini fell and the armistice had been signed, German troops occupied Florence for almost a year between September 1943 and August 1944. A climate of fear, suspicion and betrayal pervaded the city while resistance against Italy’s former allies and the remnants of the fascist dictatorship grew stronger as Allied forces moved north along the peninsula.

On Sunday, February 13, 1944, a particular diner at a trattoria in via dei Pandolfini must have recognized the danger he was in when he saw two components of the ruthless and hated “four saints” gang of killers, thugs, delinquents and torturers enter in the company of their female companions. The two new arrivals belonged to this crack unit of the Special Services Section of the 92nd Legion of the Militia Black Shirts, the fascist secret political police force under the sadistic command of Mario Carità, whose headquarters were the elegant but by then infamous Villa Triste along via Bolognese. Directly answerable to the German SS in Italy and closely linked to Mussolini’s Italian Social Republic, the “saints” were at the trattoria clearly looking for someone. More than likely they had been tipped off that their prey, Alessandro Sinigaglia, a black Jewish communist partisan, who unwisely often ate there because it was close to where he used to live in via Ghibellina, was sitting at one of the tables. They were hunting for Sinigaglia, who used the battle name “Vittorio”, because he had organised and led one of the first communist-inspired Gruppi di Azione Patriottica (GAP) of partisans in Florence, whose purpose was to engage in guerilla warfare and sabotage. The 42-year-old unarmed Sinigaglia made a break for it, but on reaching the street he was shot five times in the back. Lying dead on the ground, his assassins gouged two gold teeth from his mouth. 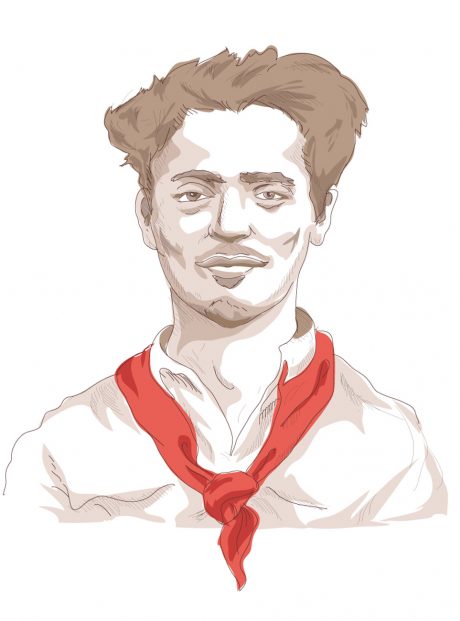 The friend with whom he was eating, Pietro Lari, a glazier from Empoli and fellow member of the GAP who had fought with Sinigaglia in Spain, met an equally atrocious fate a day short of seven months later. Immediately taken prisoner at the trattoria, he was sent to the SS controlled concentration camp at Fossoli, not far from Modena where, together with 66 other antifascists and Jews, he was shot in reprisal for the death or injury of seven SS soldiers in a train derailment for which partisans were blamed.

Alessandro Sinigaglia was born in Fiesole on January 2, 1902, the son of David Sinigaglia, a Jew from Mantua, and his first wife Cynthia White, an African-American woman born in Missouri during the era of the struggle to abolish slavery. The couple had met at Villa Smith, owned at the time by a wealthy family from Vermont who had made their money in railways. Now the villa is known as Villa La Fonte, or Bel Riposo, and is part of the European University Institute.

After training as a mechanic like his father, Sinigaglia did military service on submarines in the Royal Italian Navy. In 1924, on his return to Fiesole, he joined the Communist Party of Italy, which had been founded in Livorno in 1921 and was outlawed by the fascist regime in 1926. To avoid arrest, in 1928 he fled to France and then to the Soviet Union where while working as a mechanic in a factory he attended political school and became a convinced Leninist. Moving to Switzerland, on behalf of the party, he organized Italian communists who had escaped there before joining the republican side in the Spanish Civil War. Serving aboard a republican battle cruiser, Sinigaglia played an active part in clearing the Barcelona port of Falangist mines. In 1939, after General Francisco Franco’s victory, he sought refuge in France, but was arrested and imprisoned at Vernet Camp with other survivors of the International Brigades. He remained there until 1941 when the Vichy authorities handed him over to their Italian counterparts and he was sent to the concentration camp on Ventotene, an island in the Tyrrhenian Sea on the border between Lazio and Campania, where many influential antifascists were detained from 1926 onwards. Freed in August 1943, Sinigaglia returned home only to be killed six short months later, the first “gappist” to die in Florence.

In honour of his memory, on June 6, 1944, the 22nd bis Garibaldi Assault Brigade was formed and named after Sinigaglia, operating around Bagno a Ripoli, Rignano sull’Arno, Incisa, Figline Valdarno, Greve in Chianti and Impruneta. Among those fighting in its ranks were many former prisoners of war, including 23 Russians, 3 Poles, 3 Yugoslavs and 2 Americans. On the morning of August 11, 1944, this brigade was the first to enter Florence through Porta Romana, heralding the beginning of the city’s liberation.

A plaque erected by the members of the Florentine Resistance forces on the 18th anniversary of his death marks the place outside via dei Pandolfini 21 red where Sinigaglia was executed. It reads “here on 13 February 1944 died, massacred by the Nazis, the heroic partisan commander Alessandro Sinigaglia, silver medal holder for military valour”. Today, we could add, a black Florentine who died in the cause of freedom.