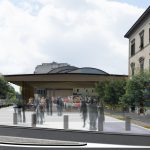 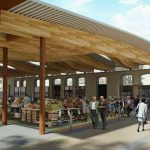 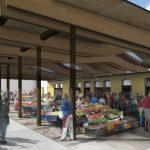 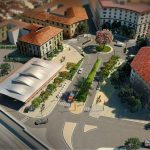 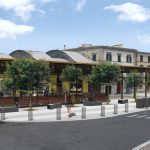 An enclosed hotspot for traffic, with popular bus routes running between the centre and the suburbs, the hazardous piazza delle Cure has seen many a near miss, whether by those cutting across from gelateria Cavini or those venturing into the risky underpass.

Plans have now been announced for the complete renovation of the popular market square, with an investment of 2.8 million euro. The architectural rendering of the reimagined piazza delle Cure features a modern, covered market space with an undulating roof, a car park located behind it, allowing vendors a place to finally park their vehicles safely, a roundabout to relieve congestion and a green area with planted trees and benches.

The space has been designed with the locals in mind, aiming to be a meeting place and play area for children, with the addition of bike racks, improved pavements and new art installations and lighting at the entrances to the underpass.

The project’s completion has been estimated for early 2019, with the demolition of existing structures to start in March. For the duration of the project, the market stalls have temporarily moved to the nearby Campo di Marte area to make way for the initial preparatory works by Toscana Energy.

The renovation is the latest in a series of redevelopment projects taking place around Florence, including the revamp to piazza Annigoni announced last November.