Anyone who’s seen Mean Girls knows that health classes in United States high schools, of which this author is a survivor, are taught by coaches and marked by a fear-mongering approach to wellness. Twin to the film’s famous line “Don’t have sex, ‘cause you will get pregnant and die” is “Don’t have a large dinner, ‘cause then you’ll get large, too.” Cousin of the latter commandment is “Breakfast is the most important meal of the day”. 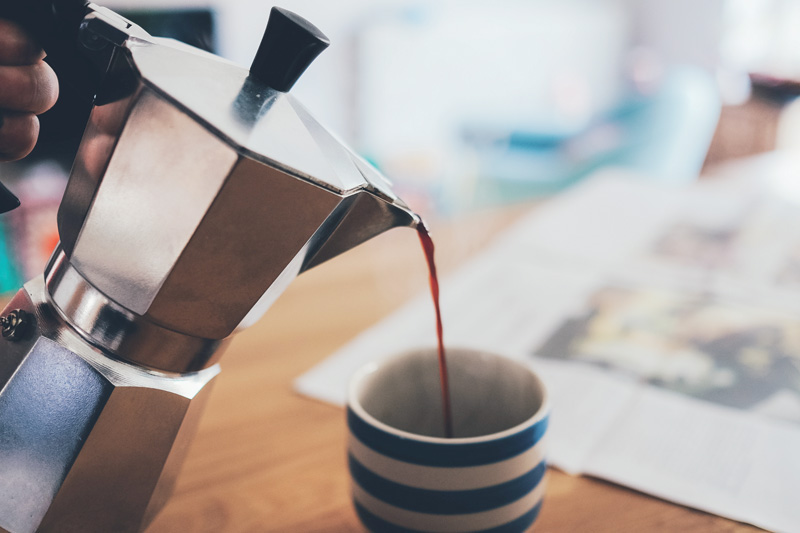 I suspect my preference for paucity—breakfast is coffee e basta—grew out of a subconscious need to reject the rules of health class. Notably, though my habits aren’t aligned with those of most Italians², who do down something beyond coffee in the morning, I’ve found they rarely call my scant first square into question, whereas my compatriots, raised on the Kellogg gospel, express incredulity.

Anecdotal experience with Italian ambivalence toward breakfast-skipping is one thing. But the Bel Paese is not immune to commercially-driven, “correct” conceptions of the day’s first meal. Indeed, Italy has its own incarnation of the cereal magnate’s commandments. Io Comincio Bene (“I Begin Well” or “I Start Right”) is a project launched by market research firm DOXA with AIDEPI (Associazione Industriali del Dolce e della Pasta Italiani—a conglomerate comprising cereal, chocolate and cookie mega-brands).

In ten tenets, the ICB manifesto breaks down the ideal colazione all’italiana, venerating the importance of relaxed, home-based eating. Presumably to distract you from the fact that they’re trying to sell you something, they stress innocuously that the “secret ingredient” to a healthy start is…a smile. (Conveniently for AIDEPI, the grin-filled occasion outlined by the manifesto also allots space for plenty of cookies and cereal.)

Io Comincio Bene is not all propaganda. More than a PR campaign, it’s a fascinating documentation of history (fette biscottate, or zwieback, gained momentum in the ‘70s) and shifting Italian habits (sweets consumption shot up 36 percent in the ‘80s). Still, partner DOXA’s website is peppered with amusingly alarmist rhetoric.

In one article, nutritionist Michelangelo Giampietro cautions against “a collection of false convictions” now circulating, “threatening to send years’ worth of experts’ work on consumer habits up in smoke”! Later he cites the percentage of carbs versus proteins to strive for in the bleary moments before your pants are on. He’s a riot at parties, I presume.

Giampietro might not approve, but most people have hyper-personal preferences about breakfast, rendering the concept malleable, even in Italy, where regional food rules reign supreme. Proof of the meal’s person-to-person pliancy is in the (breakfast) pudding. In an email survey of friends and colleagues—informal, but free of market-driven motives—I saw sharp divergences in pace, coffee consumption, and workday versus weekend proclivities.

Most telling was how everyone responded: immediately, replying-all with detailed daily practices. There was no self-consciousness about whether their primo pasto stacked up to the standard imagined by Io Comincio Bene, Instagram and their ilk. In our era of image-crafting, that’s something to chew on.

Sardinian Stefano can be said to “begin well,” delivering a bullet-point list of likings within minutes: milk and coffee, two bread slices topped with hazelnut spread or marmalade, and four to eight cookies (Ritornelli brand, typically, but lately he’s been shelling out for ostensibly organic).

Differentiating Stefano from his Roman desk-mate Federico, who swears by coffee and farro-based cookies, is the former’s tendency to wake up in time to watch a full television program. Though both men are methodical, Federico’s practices are austere by comparison, save on his passively hedonistic weekends.

He concedes that, come Saturday, “admittedly-tasty pancakes might be administered to me.”

Adoptive Florentine Flavia, who works with the pair, hails from Venezuela. Parent to a preteen, her fuel is potent: three-quarters of a coffee pot designed for six, soaked up with wheat-y cookies, bread with honey, yogurt and kiwi.

Each has a blueprint, but cookies are a cornerstone—a small win for the authors of Io Comincio Bene, a slap in the face to Kellogg and the pleasure police. I’m reminded of Carol Field, a Californian whose books introduced many an Anglo home cook to biscotti. “The first time I was served cookies for breakfast in an Italian house,” Field writes, “I assumed they had run out of bread and the cookies were a substitute. The second time, I realized that Italians actually ate cookies for breakfast.”

My 2010 Italy introduction was marked by an aha! moment not far off from Field’s, when fellow study abroad students and I gleefully noted the novelty of Nutella packets on our orientation breakfast buffet. The problem is that these packets and equivalent discoveries encourage immature responses from twenty-somethings bent on unlearning Kellogg logic. You can guess what happened next. (It’s no wonder I now stick to coffee.)

Perhaps you had a comparable experience. Overdosing is easy if you’re fresh from the black-and-white culture of Prohibition, the two-party system, 21 as the drinking age. Eating sweets at breakfast equates to being “bad”, so what follows is a collegiate, wayward-Calvinist approach: “If I’m not eating plain chia seeds and tracking calories, I might as well be gorging myself on pure chocolate hazelnut paste.”

Most transplants, thankfully, will mature to bar mornings or Moka pots. Still, overindulgence masked as integration is common early on—a daily chocolate-stuffed cornetto, two cacao-dusted cappuccini before 11am, a spiked shakerato, all in the name of “becoming a regular.” (Or, well, irregular.) 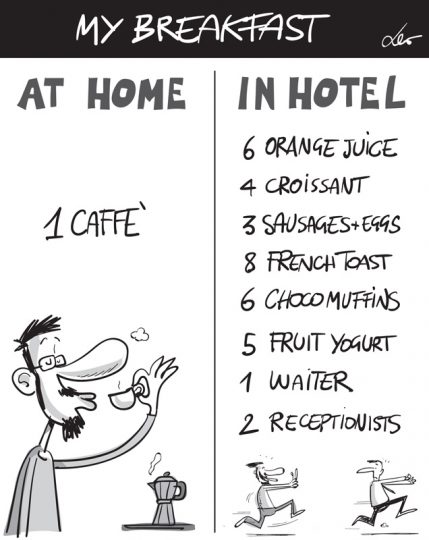 Maybe that’s not so bad, though. Breakfast itself is irregular at times—impeded by unruly hair, oversleeping, or screaming children. But, holding out hope that a modern-day Renaissance man could help me tie this up neatly, I quizzed a native Florentine about his habits. Leo, The Florentine’s graphic designer, responded with an illustration-list I found comforting. If he’s at home, it’s coffee. If he’s at a hotel, you’ll spot him loading up on “six orange juices, four croissants, three sausages with eggs, eight French toast slices…” Hyperbolic, like Giampietro, but you see where he’s going.

The only conclusion to cull: unlike more rigidly prescribed meals in Florence, there’s wiggle room in what you eat (or don’t) upon waking. Kellogg needn’t worry from the grave—our routines keep us fairly restrained. It’s the steps outside them—hotel buffets, partner-“administered” pancakes, and free Nutella packets—that remind us of our fallibility. As a Seventh-day Adventist, he might have been persuaded that’s a positive thing. Breakfast isn’t the be-all, end-all, but “beginning well” might be.

1. Oksman, “How Lobbyists Made Breakfast the Most Important Meal of the Day,” The Guardian, November 2016.