High up on the bell tower of Santa Maria Maggiore, the stone head of a woman, known as Berta, juts out bizarrely from the rough façade.

The story goes that on September 16, 1327, Cecco d’Ascoli, a doctor, astrologer and teacher, was being led to execution after predicting that the future queen of Naples would be “inclined to lust”—an accurate prophecy as it turned out: Joanna I had four husbands, one of whom she killed, and she was suffocated to death in her own bed.

As Ascoli was being marched to the bonfire on which he would be burned, crowds poured out into the street to shout and jeer at the poor man. When he passed in front of the church, he begged the crowd for a little water for his parched throat. Berta, watching from a window in the bell tower, shouted cruelly, “He’s a wizard! If he drinks he shall not burn!” Ascoli, in response to the woman’s meanness, cursed her, saying, “And you shall never again lift up your head from that place!”

To this day, her petrified head can be seen on the wall of the tower, waiting to be freed from the curse.

2/ A killer at the window

Strolling along via dei Servi, you might not glance twice at a walled-in window on the corner of via de’ Pucci. Behind it, however, lies a Renaissance tale of conspiracy and revenge.

The window is part of Palazzo Pucci, former home of the Pucci family. When Pandolfo Pucci was dismissed from the court of Cosimo I de’ Medici for immoral conduct, the nobleman planned his revenge: he posted two assassins behind the window, ready to kill Cosimo as he passed along the street on his way to piazza della Santissima Annunziata for mass. The plot was foiled, however, and Pandolfo and the assassins executed.

Cosimo ordered the window to be filled in as a warning never to threaten Medici supremacy, and it has remained so ever since.

Where to see it: Palazzo Pucci, intersection of via dei Servi and via de’ Pucci

3/ Chilling in the Cascine

Have you ever wondered what a pyramid is doing in the Cascine? Just off viale degli Olmi, which runs the length of the park, this mysterious structure was once an ice house. Built in 1796 by Grand Duke Ferdinando III’s architect Giuseppe Manetti, it was used to store dairy products and to preserve ice for the summer months.

The ice was harvested from small purpose-built ponds near what is now the Le Pavoniere swimming pool (the buildings of which once housed the head warden of the Cascine). The ice house, now used as a storage space by the Cascine’s gardeners, underwent extensive restoration in 2009, along with the nearby Fountain of Narcissus.

Not only ice chilled in the Cascine: a windy autumn day there in 1819 inspired Percy Bysshe Shelley’s “Ode to the West Wind”.

4/ A sting in the square

The statue of Ferdinando I astride his horse in piazza Santissima Annunziata is a familiar sight. But take a closer look at the base of the statue. On the bronze plaque at the rear of the statue is a curious circle of bees, all facing the queen in the centre: the bees represent the state of Florence as an industrious community ruled by the grand duke.

The plaque has acquired a local legend. It is said that it is impossible to count the number of bees using only your eyes. Because of the irregular concentric arrangement, those who try will always lose count—said to be a deliberate trick on the part of the grand duke and the sculptor, Pietro Tacca, who finished the statue started by his teacher, Giambologna, to suggest that the ultimate meaning of power is inexplicable.

Some parents are said to use the bee pattern to test their children’s attention spans, promising a present if they succeed. It is also said that good fortune will shine on those clever enough to count the bees. But beware: those who try to cheat by touching the bees or pointing at them while counting may find their luck turns the other way.

Where to see it: Piazza Santissima Annunziata, Florence

5/ Strangled on the façade

Have you ever looked closely at the bronze doors on the façade of the Duomo? If you do, you will notice, on the right-hand set of doors, the head of a troubled-looking young man with a snake wrapped around his neck.

It’s a self-portrait of Giuseppe Cassioli, one of the brothers commissioned to make the doors in 1888. During the 10 years it took to finish the doors, Cassioli suffered harassment and heavy criticism for his sculptures and the time it took to complete them. He had the last word, however: his critics are immortalised on the door as the snake, slowly squeezing the life out of the artist.

Where to see it: Florence Cathedral, piazza del Duomo, Florence 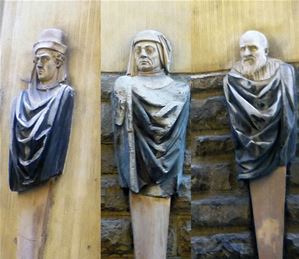 Men to look up to

We may think we know Florence well, but how often do we look up? For example, have you ever noticed the collection of busts on the façade of a palazzo in borgo degli Albizi? If you have not, it is probably because most of them are high up