It’s a classic Sopranos family dinner table scene and the topic of discussion turns to one of cultural importance. They discuss significant Italians in their very Sopranos way, leading to this exchange:

Tony: “Jesus Christ, you’d think there never was a Michelangelo. The way they treat people.”
Carmella: “Did you know that an Italian invented the telephone?”
AJ: ”Alexander Graham Bell was Italian?”
Tony: ”You see, you see what I’m talkin’-? Antonio Meucci invented the telephone and he got robbed! Everybody knows that!”

Or perhaps you remember a tidbit from The Godfather Part III when a man named Joey Zasa honored Michael Corleone with the Italian-American Man of The Year Award from the Meucci Association, only a few scenes before he attempts to kill Michael’s nephew and then Michael himself. The Meucci Association, was in fact, named in honor of Antonio Meucci.

Truth regarding Meucci didn’t hit the American law books until 2002, 113 years after his death. Antonio Meucci, this man I keep mentioning, is the real inventor of the telephone. Bell? Something of a Scottish hack.

The Italians always credited their own Meucci for the invention of the telephone. It took the United States over 140 years to catch up.

A quick run-through before the really important stuff: Antonio Meucci was born in Florence, Italy in 1808. He met his wife, Esterre, at the theater where he worked in Florence. He would remain married to her for almost his entire life until she died. In 1834, he invented an acoustic telephone to create a line of communication between the stage and the control room.

The Meucci couple then moved to Havana, Cuba as Antonio accepted a job there at the famous Teatro Tacon, later replaced by the now famous Gran Teatro de La Habana. They lived in Havana for 15 years, during which Antonio constructed a water purification system, developed a method of using electric shocks to treat illnesses and created a device that transmitted inarticulate human voice, which he called telegrafo parlante, or “talking telegraph”. Meucci’s friendship with a man named General Giuseppe Garibaldi (heard of him?) made him suspect in Cuba. At the same time, Meucci became inspired by Samuel F.B. Morse’s (the man after whom Morse Code is named) fame for his inventions in the United States. It was these two factors that pushed Meucci to pursue a move to the Red, White, and Blue.

In April of 1850, the Meuccis moved to the Staten Island borough of New York City, where they would live out the rest of their lives. This humble and oft-forgotten borough would be where Antonio Meucci would go on to invent the first electromagnetic telephone.

In 1856, Meucci would transmit his voice through wires in his own home so he could communicate with his sick wife from another room in the house. He would go on to create 30 more types of telephones based on that original prototype, displaying them in his neighborhood when they were ready to be showcased.

Now this is where things take a turn: Meucci reported that the laboratory he worked in lost all of his working telephone models. They were never found. But as “luck” would have it, Alexander Graham Bell worked in the same laboratory.

Later, due to some fraudulent debtors, the Meuccis went bankrupt and fell into poverty.  Esterre sold most of Antonio’s prototypes so the couple could make enough to get by. They were so poor at one point that Antonio couldn’t even pay 10 US dollars to reinstate his temporary patent, otherwise known as a caveat, on his electromagnetic voice transmission device, or “telephone”. This is the precise moment when Alexander Graham Bell swooped in and tore the telephone right out of Meucci’s  authentic Italian hands. Bell patented the telephone for himself and has been credited for its invention in many countries ever since.

Meucci would take Bell to court for fraud and for stealing his invention. Bell’s defense would argue that Meucci never actually mentioned anything specifically about “electromagnetic voice transmission”, the subject of Bell’s patent. The defense was technically correct: Meucci failed to state in his patent caveat that his telephone’s main function was to transmit voice electromagnetically. This was probably due to the fact that Meucci spoke almost no English, combined with his lack of solid legal counsel and capable translators.

Meucci would fight this case all the way up to the United States Supreme Court, gradually gaining momentum. As soon as it looked like he could actually win, he died…and the case with him. Four years later, Bell’s patent would expire and all hope was lost for justice for Meucci. Or was it?

Credit where credit was (over)due

113 years later, in 2002, the United States House of Representatives would pass “United States HRes. 269 on Antonio Meucci”, which stated in its preamble that, “if Meucci had been able to pay the 10 dollar fee to maintain the caveat after 1874, no patent could have been issued to Bell”. However, this resolution did not annul or modify any of Bell’s patents for the telephone, nor did it outwardly state that Meucci is the true inventor of the telephone. It simply gave Meucci credit for the invention of the telephone, where he did not get any before, in the United States.

Antonio Meucci and his wife died in their Staten Island home, where Antonio invented the very first electromagnetic telephone.

But now back to that general mentioned earlier, Giuseppe Garibaldi. General Garibaldi was one of the most famous people in the world during his life, having fought in wars in Italy and multiple countries in South America. He is also considered one of the founding fathers of the modern Italy, having been instrumental in its unification in 1861.

Meucci was great friends with Garibaldi, and when Garibaldi was in political danger, he would stay at Meucci’s home in New York—the house was even rented to Garibaldi from 1850 to 1854. Monuments to and statues of Garibaldi are literally all over the world, including in the United States. The Meucci home in New York, which they somehow never lost through all of their destitute poverty, was turned into a museum by the Order of the Sons of Italy in America, called the Garibaldi-Meucci Museum. It still stands in Staten Island, New York, to this day.

Fast forward to present-day Florence, where I am writing this article. Some time ago, when I was waiting to be let into my new apartment, I was passing the time with a panino, a coffee and a new friend. The café proprietor, Alicia, asked us where we were staying as we lingered. “Two buildings away,” we said, not thinking about the fact that she could rob us blind now knowing where we are staying.

Instead, upon our rather unsophisticated pointing to our building, rather than rob us, the truly sweet Alicia said, “The inventor of the telephone lived there…Antonio Meucci.” I went over to our building and sure enough, a grand marble plaque in bold capital letters read:

To be quite honest with you, I’m embarrassed to say I thought Thomas Edison invented the telephone—since in a US elementary classroom you often assume he invented everything. (In fairness, he did invent quite a lot).

By the time anyone reads this article, I will no longer be in Antonio Meucci’s home, where I would imagine him as a kid, perhaps demonstrating early interest in a device that can transmit sound over long distances. As I’d lie in my bed, I would imagine if his parents were strict or not, how many siblings he had. As I fall asleep tonight in what may have been his apartment growing up, I’ll inevitably imagine these very same things. Well, unless my phone rings just before bed. 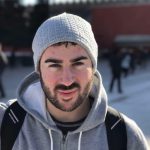 Jacob Schefer was born in Manhattan and raised in Westchester County, New York. He holds a Bachelor of Arts degree from California State University, Fullerton and lived in Florence last summer while studying abroad. Jacob has been a writer all of his life, with various short stories, award-winning screenplays, articles and essays under his belt. Jacob’s passion is to travel, while his craft is to write.