Adventure in Montecatini Terme and Valdinievole

If Florence and Tuscany inspire you, just imagine the creative and physical regeneration to be had when walking in the footsteps of Leonardo da Vinci. The cooler breezes of Fall warrant exploration by foot or bike through dream-like landscapes where wind rustling the trees plays company to your wandering thoughts. The Florentine spent a few days on the road with Toscana Promozione Turistica to help you plan your next adventure off the beaten track just beyond the cities of Prato and Pistoia, in the magical land of the Valdinievole, the area that extends between Pistoia and Lucca and that includes Montecatini Terme and the Fucecchio wetlands. 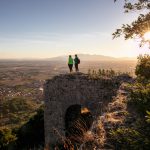 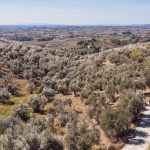 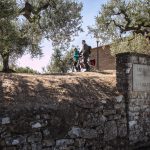 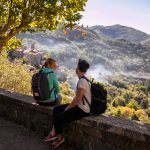 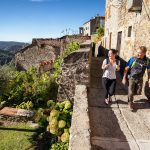 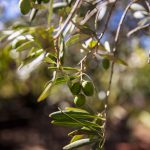 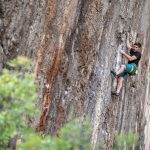 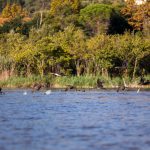 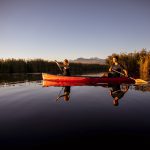 Our day begins in the spa resort town of Monsummano Terme, built in the 17th century by will of Grand Duke Ferdinand I of Tuscany. At just 20 meters above sea level, this part of Tuscany was swampy until active drainage in the 16th century made it possible to inhabit the plains. Previously, it was safer to live up in hill towns, and that’s where we are headed now—some 340 meters uphill to Montecatini Alto on the CAI trail number 30, part of the Sentiero Geologico del Colle di Monsummano, a 6km circuit with a significant uphill section at the beginning. Departing from Grotta Giusti, a rock wall suddenly emerges towering above us. We’re below the cava rossa, named for the red sediments in limestone, and the cava grigia, two favourites of freeclimbers (the red wall is currently off limits due to rock slides). There is something truly breathtaking about being so close to rock that dates to some 500 million years ago, when marine sediments created this land that is littered with precious fossils. The silence of the woods envelops us as we begin our uphill hike, majestic oaks swaying above in the wind. The ruins of a tower indicate that we have arrived at the fortified castle. Soon we’re at the south-east gate of the town of Monsummano Alto, where the gravel path becomes medieval paving stones, and we’re in a piazza in front of the church of San Nicolao, part of an outcropping of stone buildings that made up this medieval hamlet. The woods have tried to take over the town, and seem to have succeeded in one detail: a full-size tree grows out of the façade of the church. A teeny tiny hotel and restaurant animate this otherwise essentially abandoned town (that can also be reached by car, for the less adventurous).

A colourful sail comes into our field of vision… Monsummano Alto is in fact a favourite place for paragliders for the way it is perched upon a cliff. Suspended in the air, gliding like an eagle, the plains spread out below, light sparkling off buildings.

For those of us not taking the fast way down, the hike continues, downhill this time for about an hour, ending where we began, at Grotta Giusti. With its three naturally defined areas named Heaven, Purgatory and Hell, donning a hooded bathrobe and taking in the natural heat and healing vapours of this geologically rich territory is a well deserved and relaxing way to end the day. 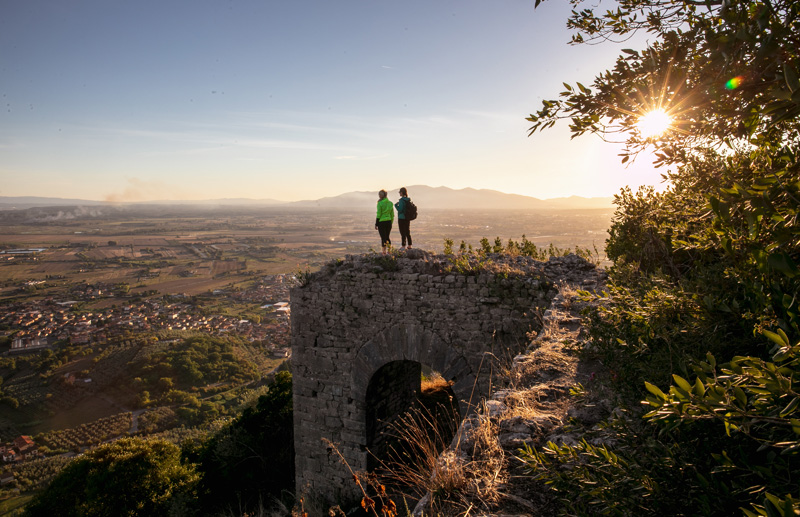 Montecatini Terme and Valdinievole: magical Tuscany from Leonardo to Pinocchio

The hills shimmer with olive trees, so many olive trees as far as the eye can see; a forest that dances in the wind and through which you can see the sky and the open landscape below. Was this grey-tinged light the same light that inspired Leonardo da Vinci to paint his famous hazy landscapes when he walked this very trail? The Valdinievole is home to Leonardo, but also to Carlo “Collodi” (Lorenzini), father of Pinocchio, the naughty wooden child whose adventures all took place in this area. Home of genius and also of relaxation in favour of artistic inspiration: Giuseppe Verdi and Giacomo Puccini both vacationed here. 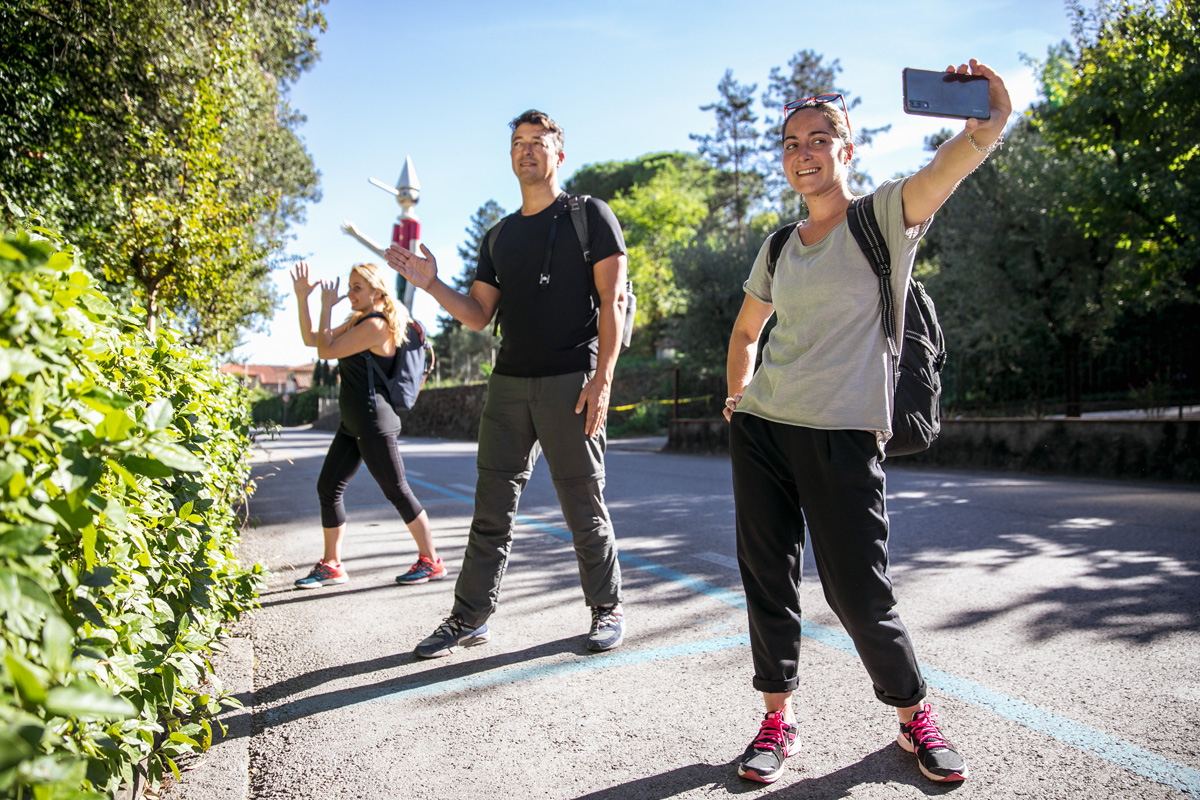 The Casa di Leonardo, the artist’s native home in Anchiano (where he was born in 1452), lies on the Montalbano trail, where we begin our day by bike. As our legs set the wheels in motion, we’re reminded of the great artist’s drawings examining how everything works. One can’t help but think that if Leonardo were alive today, he would be an adventure traveler, testing his machines to fly, cycle, and plunge underwater. Gears, chain, wheel, foot… the rhythm is meditative. You can feel the genius of this land as you calmly cycle through its gentle hills. The going is easy – the highest hills here reach 600 meters – and the opportunity to stop at the Leonardo Museum in Vinci, in towns like Buggiano and at sights like the Doccia Mill, of which Leonardo made note in the Codex Atlanticus, make sections of this itinerary a perfect activity for families. At the end, we reach Collodi, where a giant Pinocchio reminds us to always keep the flame of desire for adventure kindled through trips like these. Paddling through the Padule di Fucecchio

The wetlands at Fucecchio can easily be seen glinting in the sunlight from Monsummano Alto; its 1,800 hectares make it the largest inland marsh in Italy. It’s possible to book a flat bottomed boat tour through parts of the nature reserve, where the only sounds are the dipping of the paddle and the calls of some of the 200 species of birds that call this place home. The reed thickets create islands around which there is room for rare types of water lilies; the swamps provide shelter for beetles, crayfish and a wide variety of microfauna. Walking and mountain biking paths lead to birdwatching sites and are dotted with informative panels. For more information see www.zoneumidetoscane.it. 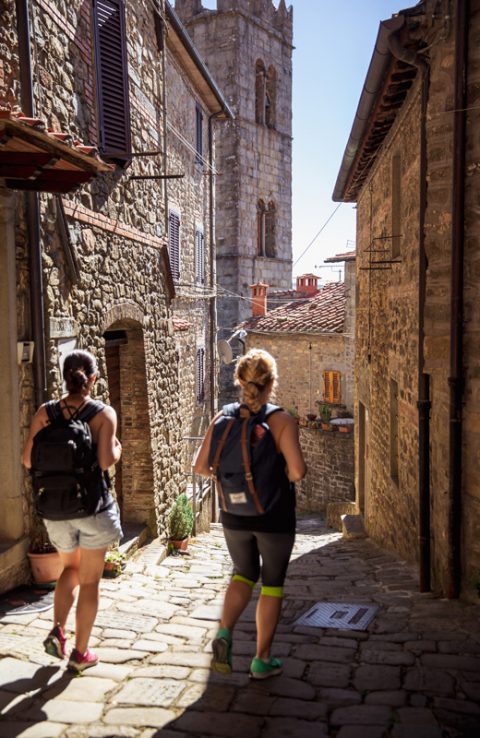 10 castles, 10 towns built of the grey pietra serena that was this part of Tuscany’s gold mine. We’re talking about the Svizzera Pesciatina, officially Valleriana but nick-named for the town of Pescia which lies at the bottom of the road that winds up the mountain to Pietrabuona, Fibbialla, Medicina, Aramo, Sorana, San Quirico, Vellano, Castelvecchio, Stiappa and Pontito. Hiking paths connect them all, offering unique viewpoints as well as notable cultural and gastronomic stops along the way. For example, between Castelvecchio (where you can visit the Pieve as well as the Oratory of San Rosario) and San Quirico, an easy hiking path (ideal for families) leads through fields of chestnut trees, historically a source of sustenance (in the form of flour) for this area. Now, visitors can enjoy sagre dedicated to the mealy nut in the last weeks of October and again in February.

Wellspring. This is the theme of the 2018 Adventure Travel World Summit, which looks to the Latin term ad fontes, return to the source – which can be thought of as the source of inspiration as well as returning to the core ideals that drive this community of explorers. What better “spring” to host a meeting on this theme than Montecatini Terme, the Tuscan thermal springs that will welcome adventure travel trade and press from around the world from October 15 to 18, 2019 for the first ATTA (Adventure Travel Trade Association) meeting ever to be held in Italy.

“The area of Montecatini and the Valdinievole is perfect for this event: our very nature is adventurous,” says Alessandra De Paola, tourism superintendent of Montecatini Terme. “The first travellers and settlers in this area, tucked between the Antiappenines with its bandits on one side and with the risk of malarial fever from the Fucecchio swamps on the other, were pioneering heroes who set the tone for modern adventure travel here.”

Workshops, networking and “off-conference” sessions are only part of this event: ATWS delegates join a “Day of Adventure,” choosing from forty day-trip options, and can also attend multi-day itineraries in Tuscany before the conference, opening up possibilities for tour operators, hospitality providers and destinations in the region. For more information, see www.adventuretravel.biz.