Getting to know The British Institute of Florence’s new director

Before the Christmas holidays, The Florentine sat down with Simon Gammell, director of The British Institute of Florence since October. 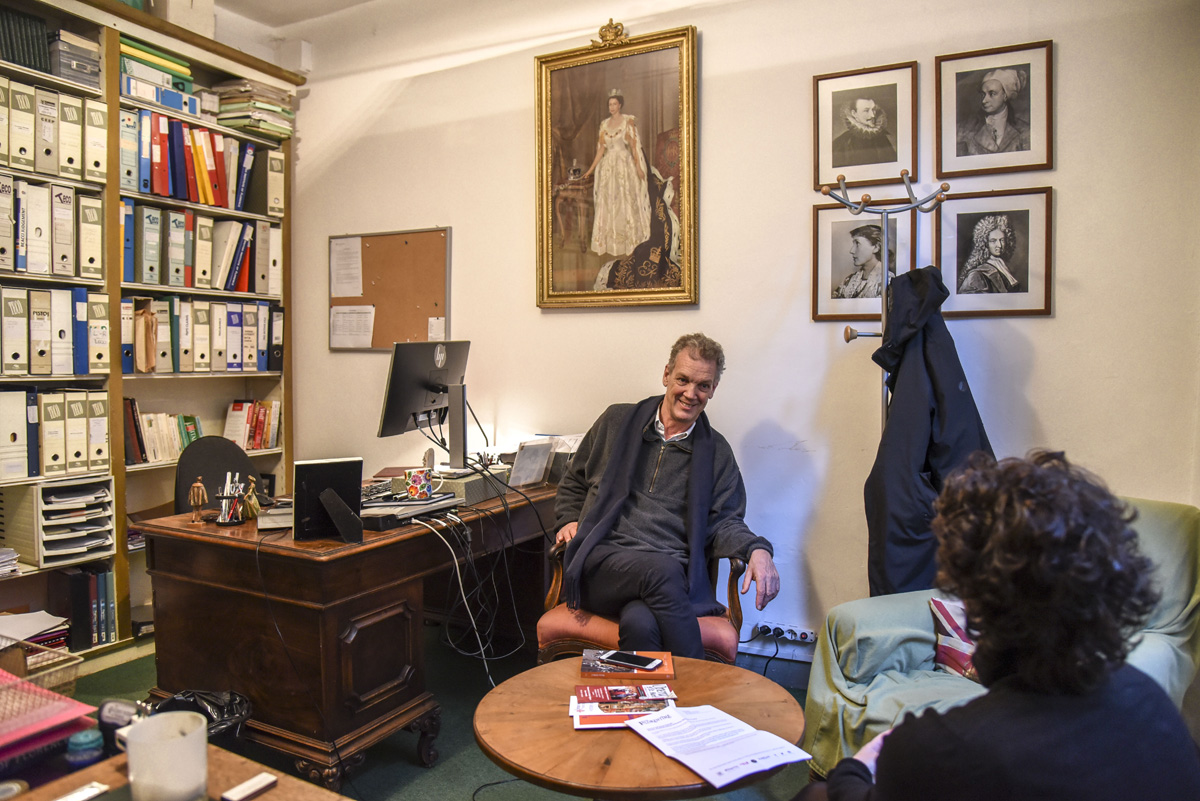 Simon Gammell in his office with TF’s Helen Farrell / Ph. @marcobadiani for The Florentine

Helen Farrell: Congratulations on your appointment as director of The British Institute of Florence. This isn’t the first time you’ve lived in Florence. Does it feel like a homecoming?

Simon Gammell: My wife and I were here 40 years ago when I had just finished university, so it definitely feels like a homecoming. A friend had recommended me to the then-director of the British Institute, Ian Greenlees, who phoned me, and seeing as I had previously done a short programme teaching English as a foreign language, he asked me to come and teach here. I arrived here to teach English almost 40 years ago to the day and ended up staying for two years. My then girlfriend, who I’d left at home in London, came out to Florence and shortly afterwards we got married. We got married in London, but spent the first year and half of our married life living here in Florence, so it’s very much a big part of our life.

HF: Now you’re back, do you notice the changes or the similarities more?

SG: The architecture and the art is very much the same, but the city is better organised and much cleaner nowadays, and there’s been a lot of development. San Frediano at the time was very quiet as there was only one restaurant and two bars. Santo Spirito was decidedly shady; the whole Oltrarno area was completely different.

HF: Your career with the British Council has taken you all around the world, from Buenos Aires to Sydney, Mumbai to Los Angeles. Which of these appointments proved the trickiest in terms of integration? And which was the most rewarding?

SG: They were all very different, but Poland was the hardest place for me. The office was in very good order, so I was mainly tasked with keeping it running steadily, whereas I’ve always liked having challenges, being entrepreneurial and doing new things. Polish is difficult to learn, and it was the only time we’ve been in a country where we haven’t spoken the local language, and that made a huge difference. In Bombay, I say Bombay because that’s actually what the locals call the city, the majority of the population speak Hindi as their first language as well as Marathi, but there’s also a lot of people who speak English, such as businesspeople who often speak it as their first language. 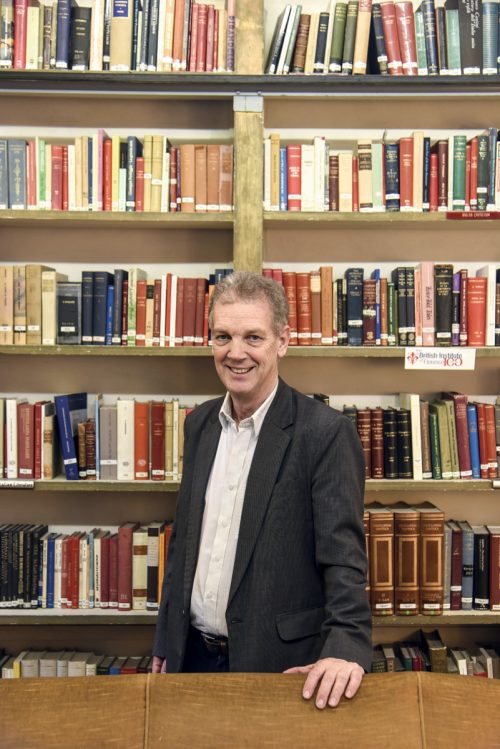 Simon Gammell in the Harold Acton Library of The British Institute of Florence / ph. @marcobadiani for The Florentine

HF: Given your love of theatre, can we expect to see more “drama” coming from the BI during your tenure?

SG: When I was here 40 years ago, I set up a theatre company, but my days in theatre are done. The theatre we did in Florence was very important to me. Recently, a man came into the Institute’s library asking to see me. It turned out to be one of the actors from the mixed Italian and English cast from the first show! Our first show was the best one as we had put so much process and work into it. After working in Florence for the first time, I went back to the UK as a professional theatre director and did it quite seriously for a while. Over the years with the British Council I’ve done a lot of producing international tours of British theatre, so theatre has been a big part of my life. In Florence, it’s not easy to see how theatre per se could be part of the programme at the British Institute because we don’t have a theatre and we don’t have the resources to start sponsoring things in town. That said, I have been asked to give a lecture on Julius Caesar for the Shakespeare Week in the spring, so my interest in theatre is still strong.

HF: Not everyone realises that the BI is a UK registered charity. What challenges are there in heading up an overseas charity headquartered in Italy?

SG: The continuous challenge is funding. It’s important that people understand that the British Institute has never had UK government funding and keeping the beautiful library rooms in the Palazzo Lanfredini alive and well has a cost. With the greatest respect to our valued and loyal members, the income from library fees doesn’t come close to what’s needed to maintain the building, resulting in a continuous need of fundraising. Being a British organisation in Italy there’s not a huge appetite amongst Italians to fund us and back in the UK a lot of the funders want to fund things happening in the UK.

HF: There’s a comment from a former student on your website, which reads “The British Institute also provides a community through which to meet like-minded people, who love Italy, and with whom we have made and enjoyed ongoing friendships.” How does the BI balance its educational, cultural and community missions?

SG: All of the missions fit together. The sense of community is really important because there are many different communities that coalesce around the Institute like local expatriates and visitors from the UK, America, Australia and the rest of the world, who all wind up here and often come back repeatedly. It’s their home away from home in Florence. There’s a Florentine audience who typically know us as the best place to learn English and British English is highly valued by Florentines. Not so many know about the library or the Palazzo Lanfredini; one of the things I’m interested in developing is the engagement with the palace, the site and the cultural side of the Institute. So, yes, the sense of community is really important, and it is obviously informed by what we do. This is a place that is dedicated to the arts and the intellect and that creates a community of interest. People come here if they want to “feed the soul”, as well as take part in events like teatime, the book exchange, where people talk about books they’ve read and enjoyed, and film events and lectures. Equally important are the opportunities to learn Italian and participate in the brilliant history of art programme. The English language is a necessary skill for everybody and if you want to study and explore it more, we have things to offer. I like the idea of the Institute being a home for people, somewhere you can go and feel comfortable and welcome. 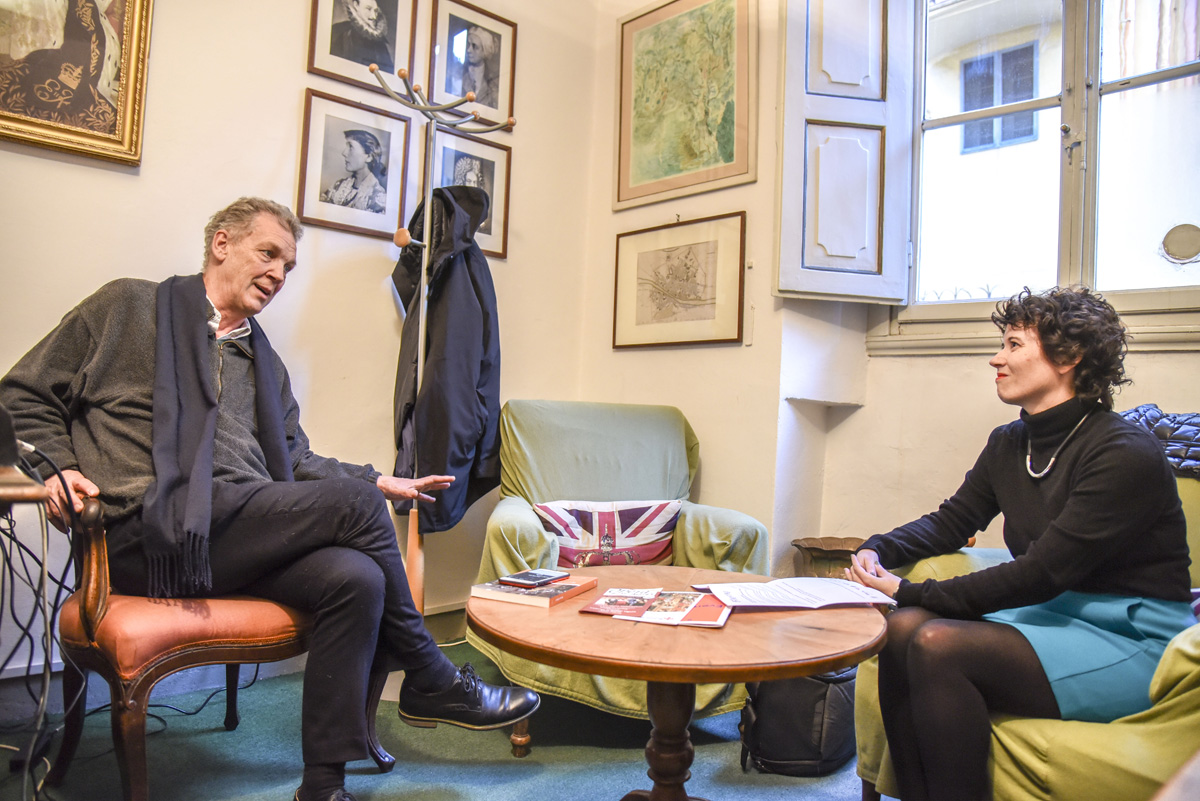 HF: In this historic time for the UK, which aspects of contemporary Britain do you most want to communicate as director?

SG: Despite some of the strange politics that’s sweeping the whole of Europe at the moment, I would like to communicate through the Institute the UK’s creativity, diversity and values. We are a tolerant society and we value diversity. If you want to be a bit strange, the UK’s a good place to be because there’s tolerance for different kinds of people, different ways of being, seeing and thinking and where you come from doesn’t matter.

HF: The BI celebrated its centenary in 2017 with a royal visit and the issuance of an Italian postage stamp, among myriad other festivities. What’s next from the BI?

SG: What we have at the Institute needs to be enjoyed more, by more people. I like the idea of making the Palazzo Lanfredini a more open and inclusive place, and we are looking at various ways we can do that. We love our members, it’s their home, and they will always be welcome, but there is room for everybody here. I would like to see the place become more active and buzzing, and then I will feel I have contributed and made a difference.