There’s a “UFO” in the Palazzo Vecchio. The metre-wide tondo actually goes by the name of Madonna and Child with Young St. John the Baptist and hangs in the Room of Hercules on the top floor of the city hall.

The scene seems an anodyne affair at first glance, the sort of private commission painted to adore the walls of 15th-century palazzi: there we see the Virgin Mary, resplendent in a red gown and dark-coloured cape; a young John the Baptist assisting Baby Jesus.
The country background reveals shepherds, a dog and a small flock. The oddity emerges when you follow the shepherd’s (and his dog’s) gaze, a hand raised to his forehead. Above the Madonna’s right shoulder, high up in the sky, hovers a strange flying object. Oval and grey, it appears to be moving due to the golden rays that surround it like antennae. So curious is the painting that it’s earned the nickname of “Madonna del UFO”. To make things even stranger, no flying machines existed back then (the information panel dates it to around 1510-20)—although Leonardo got cracking on his ornithopter around 1485. Some art historians suggest that the object is an angel appearing as a cloud and that the shepherd is shielding his eyes from the light of God, also backed up by the presence of a nativity star and three smaller stars in the top left corner representing the continued virginity of the Madonna before, during and after childbirth. Ufologists, on the other hand, regard the painting as an indication that sightings occurred in the Renaissance and that the artist put brush to canvas to record the event. (The attribution is shrouded in confusion: the Palazzo Vecchio states Maestro del Tondo Miller as the author, whereas online resources attribute the work to Bastiano Mainardi and/or Arcangelo di Jacopo del Sellaio.) 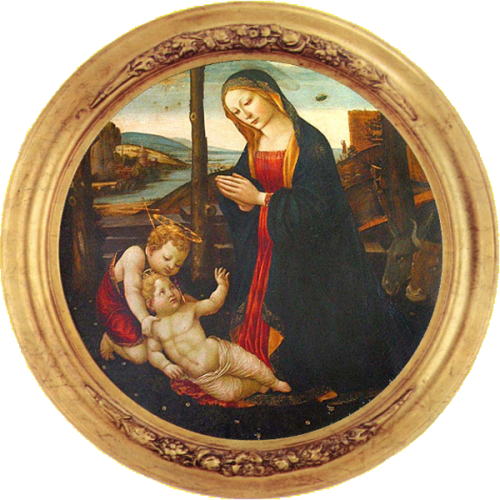 Not long ago, the National UFO Centre (CUN, www.centroufologiconazionale.net) revealed that Tuscany was the region with the second highest sightings in 2018—24 compared with Lombardy (26), followed by Lazio (22). According to CUN and the Florence UFO section, Sezione ufologica fiorentina (SUF, www.suffirenze.altervista.org), July was the month with the most sightings, double those spotted in August and September, while only two UFOs were seen in March and three in April. 184 sightings of unidentified flying objects in Italy were reported by email to CUN in 2018, a 61 per cent rise compared to the 114 reported sightings in 2017 (120 in 2016, 100 in 2015 and 135 in 2014). In an interview with Florentine newspaper La Nazione, Vladimiro Bibolotti, president of the National UFO Centre commented, “These are peculiar figures that go against the trend in the last five years, which saw much lower numbers.”

“Everyone has a camera on their phone and no one sees UFOs anymore,” wrote Northern Irish novelist Ian McDonald in his melancholic time travel romance. Here’s my advice this February: turn off your phone and search for the unexpected. If you don’t find it in the cerulean skies, the Palazzo Vecchio’s “Madonna of the Flying Saucer” will have you believing in Unidentified Florence Objects.