Many years have passed since I last watched the beloved 1968 British musical Oliver!, but the prepubescent cherub voices of the movie’s orphan boys often ring out in my head. Every time I’m hungry and in a hurry, in fact.

And not a pasta al pomodoro or eggs over easy kind of hurry. In my private Idaho, being in a true hurry calls for a canned tuna and mayo sandwich from a nondescript neighborhood bar. (Most any old place with sour coffee and a lone floating copy of the non-sport pages in La Nazione—always already claimed—will do.) The barista will plunk the tramezzino in a white paper bag, cute but unnecessary, like my aunt Beth’s Christmas gifts. Rushing, I will fish it out and bite in, and the orphan choir will cry out from my mind’s church:

Food, glorious food!
The price tag for a sandwich of the sort is usually 2.50 euro. Perhaps a little steep, all things considered. But around the third bite of one of these basic-as-water bar lunches, it hit me recently that I didn’t care. Because I love bar food. 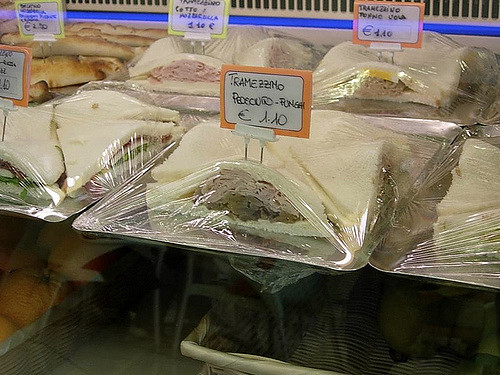 Bar tramezzini, from a time when prices were even lower /
Ph. Rodrigo Ceron

“Bar food” and its even more banal variant, “circolo food,” are not sexy. They are dependable, placid and unchanging, an edible equivalent of financially stable beta males in khakis. Flashy “concept” spaces and Michelin-starred restaurants will woo you with their tasting menus and ambient lighting; bar food will be there for you in the morning. (Circolo food will want to meet your parents, if they’re generally left-leaning and know how to play cards.)

The term “bar food” can be misleading, as it means different things outside Italy, like the cups of peanuts, olives or cheese-dusted “party mix” on American-style counters that, in simpler times, helped keep bar-hoppers nourished and apparently non-antsy while waiting for friends or dates caught in traffic. People don’t seem to eat them anymore, probably because they can scroll through Instagram, and Because Millennials. But I am not talking about those foods.

I am talking about stale, candied pineapple-topped breakfast tarts. About formerly buttery puff pastry that leaves your legs doused in pasta sfoglia dandruff. Square-cut pizza marinara whose dry, patchy sauce suggests the crust has caught a rash. I’m talking about hard-boiled egg and tomato on soft white bread wrapped in skintight plastic, the Hervé Léger bandage dress of the bar counter. If you live in Italy, you know what I’m talking about. And yet you do not talk about it.

No one does. In a 1991 Esquire sizzler on the Kennedy family, Elizabeth Kaye, master of the celebrity profile, wrote that “each individual has three lives: a public life, a private life, and a secret one.” She later told Alex Belth of Neiman Storyboard that she never wrote about anyone’s secret life, despite being privy to many a racy detail. It’s nobody’s business, Kaye said.

Yes and no. We should speak more freely about our secret food lives, as there must be more bar food enthusiasts among us than Florence’s glittery food “scene” presupposes. My (formerly) secret fervor for canned fish on processed white bread may not be your business. Still, those frantically purchased panini help keep some places in business.

I’m not a Kennedy or anything close to Kaye material, but here goes. My public food life in Florence is dinner out in a trattoria, the kind where you spend 30 euro, get weeknight-house-wine drunk with a dear friend, and by the time the coffee comes around, you are both sensing that nothing in the world is better than this. My private life is more like braised fennel for one, or Marcella Hazan’s tomato sauce, which I’ll slow-simmer for guests but prematurely remove from the flame if just for me. It’s running home at 1pm to let my dog out and realizing I ate today’s lunch at last night’s dinner. The bare fridge then gives rise to my secret life: strapping on the dog’s leash and racing up the block, starving, for a sandwich that could not care less what I, or anyone, thinks of it. Committing the twin cardinal sins of devouring it while standing, and then daring to think, Damn. That hit the spot. 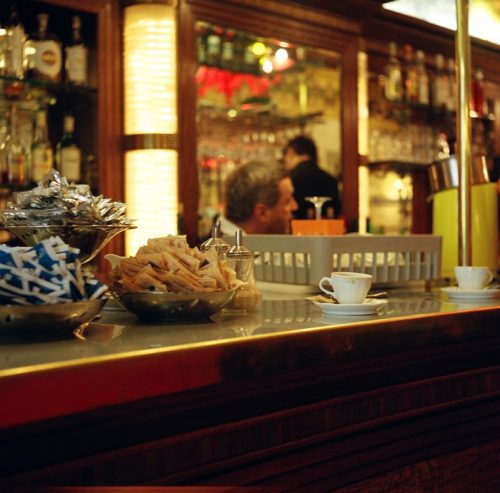 Don’t misunderstand me. I give a good many hoots about fresh ingredients, though I’m a few owl calls short of some Florentines and “foodies” (shudder). Meals should taste good, and yes, sitting at a table for them is nice. But I love basic bar food for its savory honesty, for its dried herbs sprinkled on deflated mozzarella slices. I love circolo food for its unfussed volunteer servers. I am allergic to the narrative that Florence is all four-hour dinners and leisurely lunches, sourced from Chianina cows who bleed heirloom tomato juice and subsist on KM 0 ribollita from family-run restaurants.

Sometimes Florence is a version of that, certainly.

Other times it is running across town in the rain for your sweet dog’s sake, or missing the bus for your English lesson in San Domenico and spending the full hour’s pay on a taxi so you don’t lose the job. It’s being told you’re lacking an important document and that no, we don’t have it now, you must come back tomorrow, or Monday, or maybe in five months. You skulk into a corner bar, defeated, and spend your last three euros and tears on a coffee and an inexplicably consoling slice of prosciutto, sheathed in a tortilla-like mystery bread that isn’t quite piadina, or maybe it is, nobody knows. Lotto machines, espresso echoes and background chatter do not stop the scary thoughts from surfacing: What am I doing? Does anyone care?

Thankfully, the limp prosciutto does. The coffee agrees. Even the old man with the few interesting pages of La Nazione sitting unread under his saucer would probably offer some comfort, if prompted.

To borrow from the recently deceased poet Mary Oliver, bar food does not “have to be good”. It has to be forgiving and straightforward and consistently present. On days when things are going up in flames, opt for speckled marinara pizza, which is wonderfully predictable. When celebrating triumphs, take a worthy friend for a few rounds of peanuts and one euro house wine at the riverfront circolo. In between, standing tuna sandwiches can help sustain you. Dull food can be dignified. Glorious, even.