Michele Leo of Santarpia shares tips for the perfect pizza

Chef Michele Leo shares his tricks of the trade to make the perfect pizza at home, as the pizzeria opens for lunch on Saturdays and Sundays.

Chef Michele Leo, of Santarpia, shares his tricks of the trade to make the perfect pizza at home, as the pizzeria opens for lunch on Saturdays and Sundays.

When it comes to baking, home ovens usually reach a maximum of 250 degrees Celsius, so preheat and, when it’s ready, place the tray on the lowest shelf because the aim is to cook the pizza well underneath. The more we heat it from below, the more and the quicker the pizza swells up. Check that the crust has formed by lifting up the pizza slightly. Remove it from the oven, add the mozzarella and put the pizza back in the oven on the highest shelf. When the mozzarella melts, the pizza is ready.

I haven’t always been a pizzaiolo. I was a computer technician for 13 years. Then, in 2004, I fell head over heels in love with cooking and decided to completely change my life. It wasn’t easy: I was 35, married, with two kids, but the passion was overwhelming, so I left my job and started to train as a cook. I was lucky to meet personalities like Gabriele Bonci, who now does a lot of television such as Pizza Hero—I always say that he saved my life because otherwise everything would have been so monotonous.

In 2007, I started to work for Gambero Rosso, managing the opening in Naples of the first Città del Gusto outside Rome. It was a great way to meet chefs from all over Italy who came to teach at the on-site cooking school and I started to hone my bread- and pizza-making skills. In 2014, a new challenge came along and I opened a pizzeria in Palazzo Petrucci, a Michelin-star restaurant in the heart of Naples, just 200 metres from cult pizzeria Sorbillo. People would come in and ask where Sorbillo was! Eighteen months later, I moved to Bologna where I ran the bakery side of Mozzabella for three years, from pizza by the slice to bread and leavened cakes.

I arrived at Florence’s Santarpia two and half months ago. Our most popular pizzas include Mastunicola, featuring lard, cave-aged pecorino, pancetta and basil, and fried pizza Montanara with sheep ricotta. We have established close ties with the nearby Sant’Ambrogio Market, serving fried anchovies from Fabio Gallerini and Luca Menoni salami. Make sure you leave room for something sweet—the signature desserts by master pastry chef Luca Mannori and the decadent Torta Pistocchi chocolate cake are amazing.”

The Recipe – Pizza dough at home

This home pizza dough is a learning curve requiring dexterity. But once you get the hang of it, you can bake the pizzas in the morning and they will be perfect to serve to guests that night. 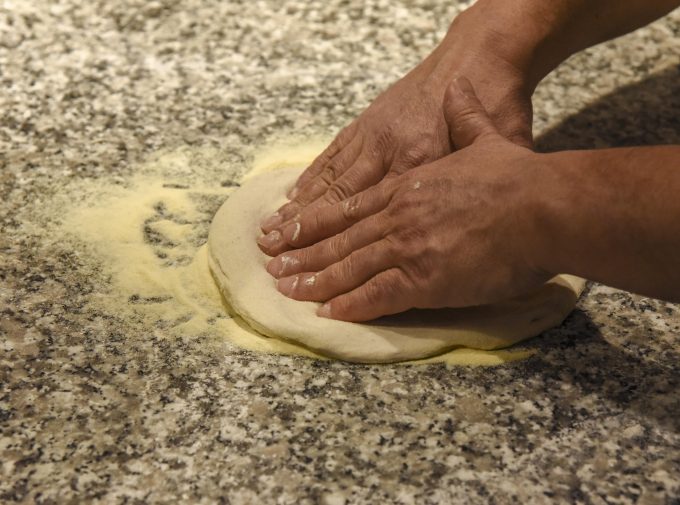 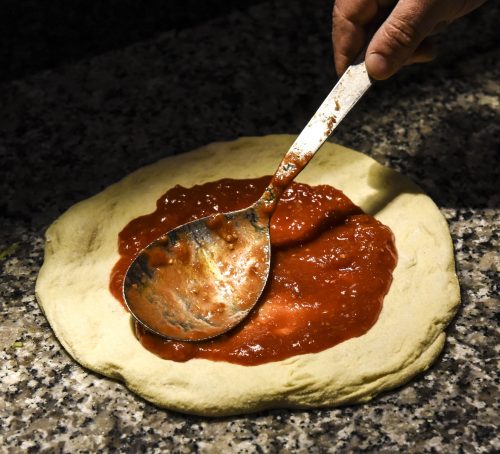 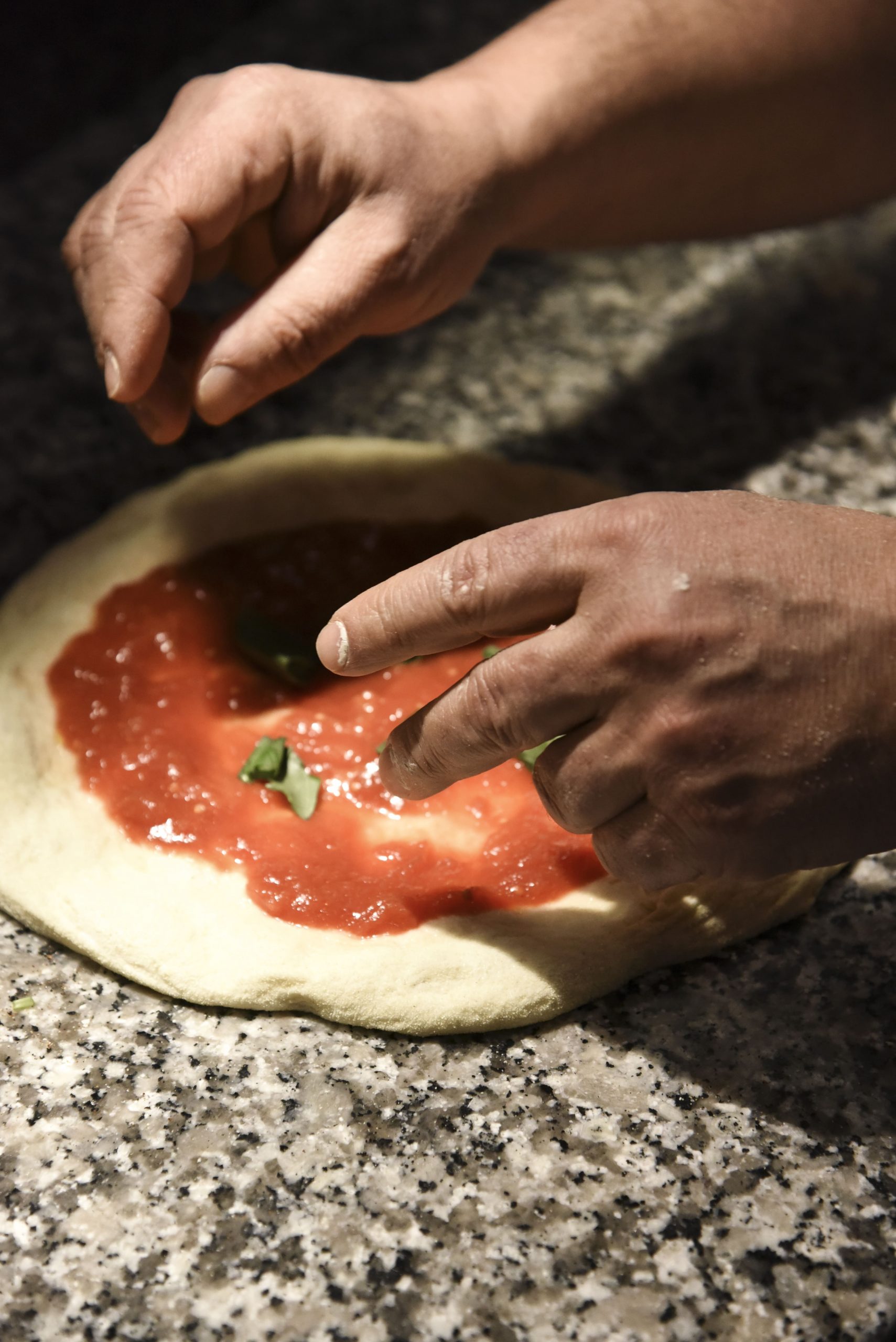 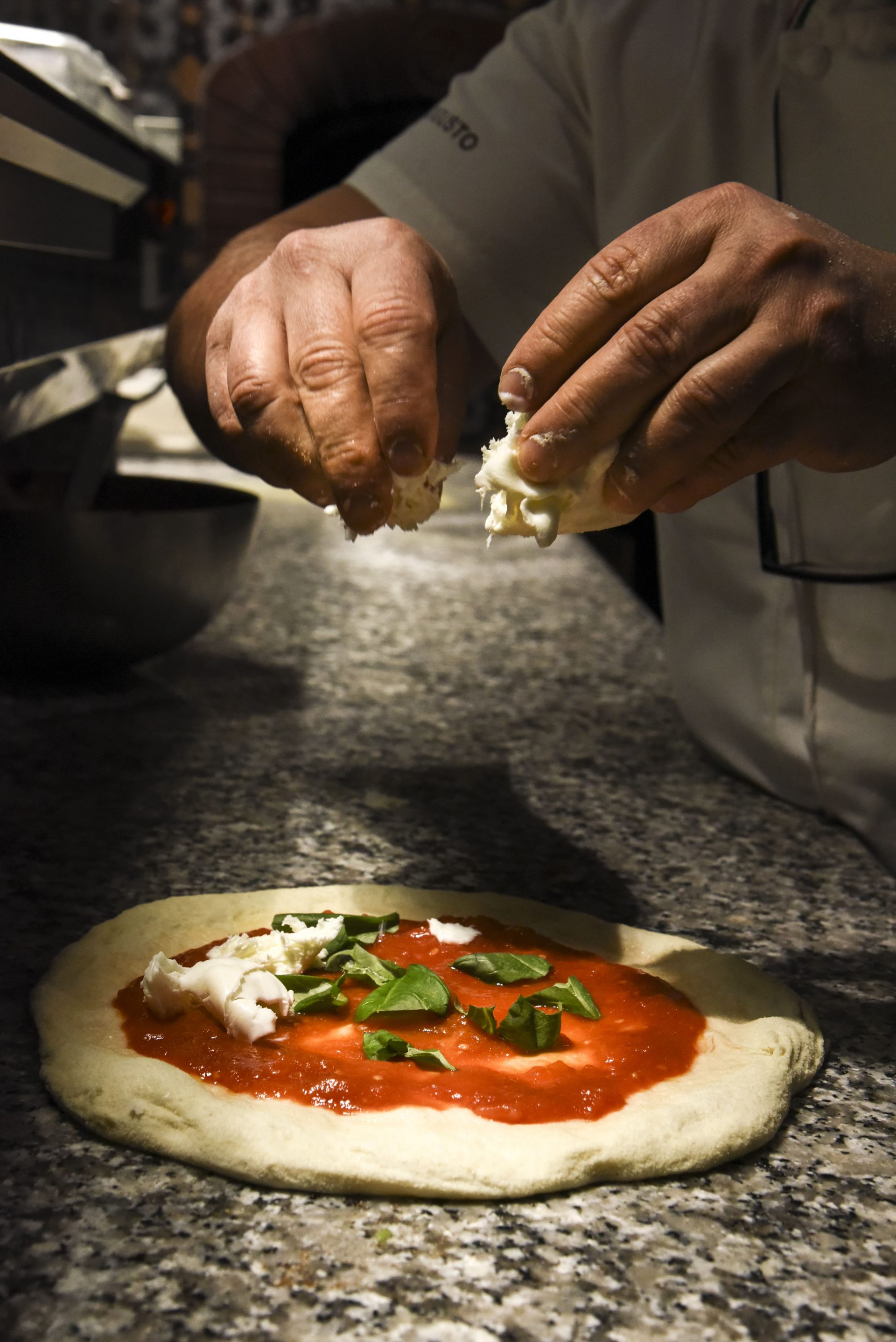 Dissolve the yeast in the water, add the flour and lastly the salt and oil.

Knead to form a soft dough. (The dough is so soft that you might want to add a bit more flour until you get the knack of the kneading.)

Leave the dough in the fridge overnight at a temperature of 7–8 degrees.

Take the dough out of the fridge and leave it for at least an hour so that it reaches room temperature.

Form the dough into a rectangular portion that weighs approximately 900 grams and leave it to rest for at least an hour. The longer the dough rests, the easier it will be to stretch out.

While the dough is resting, press the peeled tomatoes through a large-mesh sieve. Add a pinch of salt.

Preheat the oven to its highest temperature.

Stretch out the dough on top of a scattering of semolina flour.

Spread the sauce on top of the pizza and return to the oven on the lowest shelf.

Remove the pizza from the oven. Rip the mozzarella and place it on the top of the pizza.

Put the pizza back in the oven on the top shelf for 2 minutes or until the mozzarella is melted. Finish with the basil.