There is a very Florentine phenomenon of Last Supper paintings in the refectories of convents and monasteries; these images functioned to remind religious diners of the sacrament of the Eucharist, when Christ declares that the bread is his body and the wine is his blood. What wine was served at that table and was it any good?

Before modern water treatment was introduced, wine was a necessary beverage; people added wine to water to make it potable and water made vinegary wine taste a little better. In Roman and Etruscan times, herbs and spices were added: Pliny the Elder indicates that his first-century contemporaries were fond of adding myrrh, cedar and frankincense to wine. Dr. Patrick McGovern, an expert on ancient wines, cites pepper, wormwood, capers and saffron: “The idea was not just to cover up the signs of a deteriorating wine but to keep the wines for a longer time and produce new, exciting tastes for jaded palates,” McGovern told wine magazine Decanter. 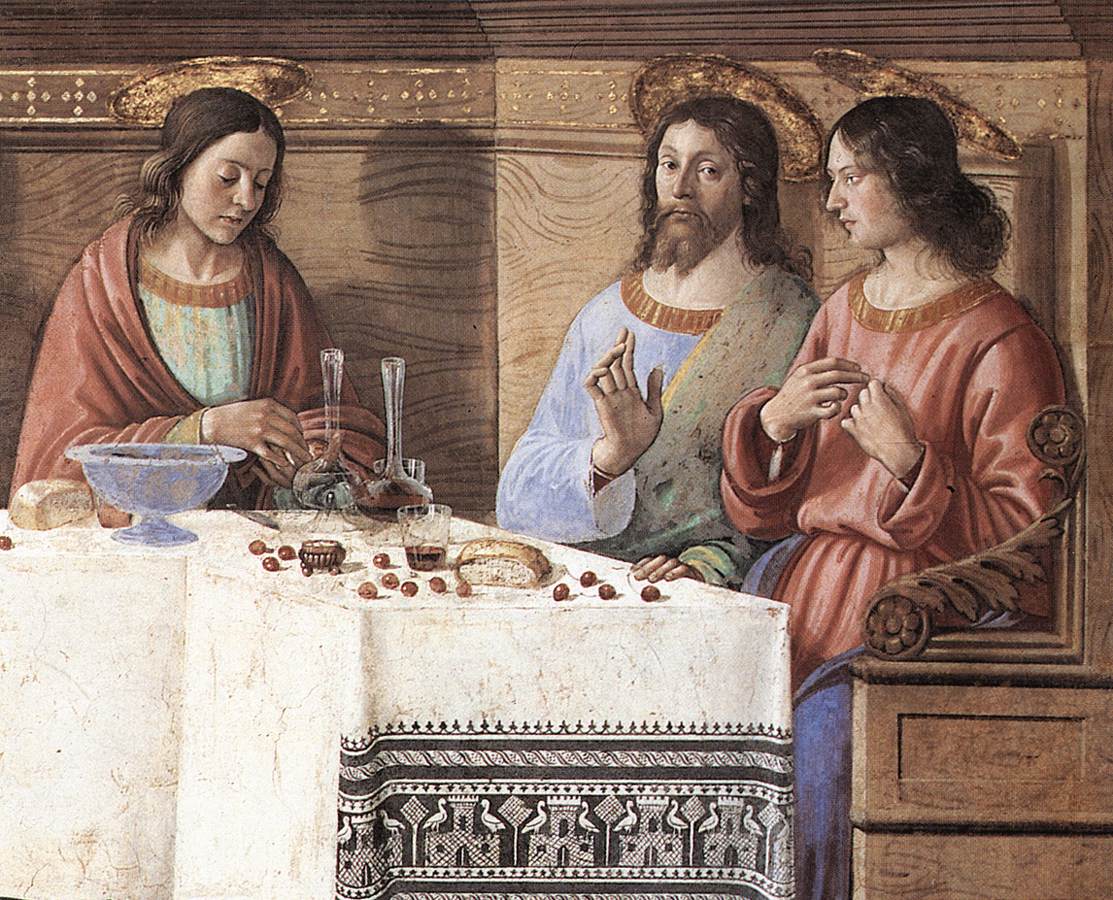 What wine was Jesus drinking? That ancient Passover Seder of eggs, bitter herbs and roast meat was probably paired with a red. Should you wish to emulate it, the closest modern wine would be Amarone, but for a really authentic experience, make mulled wine with the afore-mentioned ingredients. Good luck finding frankincense.

The food and wine depicted in Florentine convent art does not represent ancient menus but rather contemporary fifteenth- and sixteenth-century dining, so we should turn to this period to discover what was served at these painted meals, and why.

At wine tasting events in modern Italy, you’ll see people sniffing, swirling and swishing, considering scents and flavours, and rating aspects like balance and complexity. Dr. Allen Grieco, a food historian, explains to The Florentine that pre-modern wine tasting was based on very different factors.

“Taste, color and provenance were relevant, but most of all, taste was an indicator of humoural composition; the four qualities—hot, cold, dry and wet—constituted the backbone of scientific thought. Ideally, one sought a balance of humours. Food and wine helped create that, taking also into consideration the four elements, seasons, times of the day and the ages of life.”

This theory dictated an almost medical prescription of appropriate wines; the “pre-modern sommelier” was most often a doctor whose vinous arsenal could stave off plague, ease the chills of old age or calm lust in the young.

Grieco uses medieval and Renaissance medical treatises in his forthcoming book Food, Social Politics and the Order of Nature in Renaissance Italy (Villa I Tatti, Summer 2019) to provide examples of the suitability of wines for specific people. We learn that sweet and powerful wines like Malvasia should be consumed in very small quantities or on special occasions like weddings: too much would cause dangerous overheating of the body and lead to physical and moral consequences. Thus, you would not serve it to categories of people who were “hot,” like lusty young men, but an acidic or weak white wine could temper such problems.

Dietary prescriptions balanced food and drink, so the pairing of salad with red wine—unthinkable today—served to compensate for the coldness of lettuce. This perseveres in the Italian habit of eating peaches in red wine, recorded in the proverb “Pesche, peri e pomi vogliono vini buoni.” 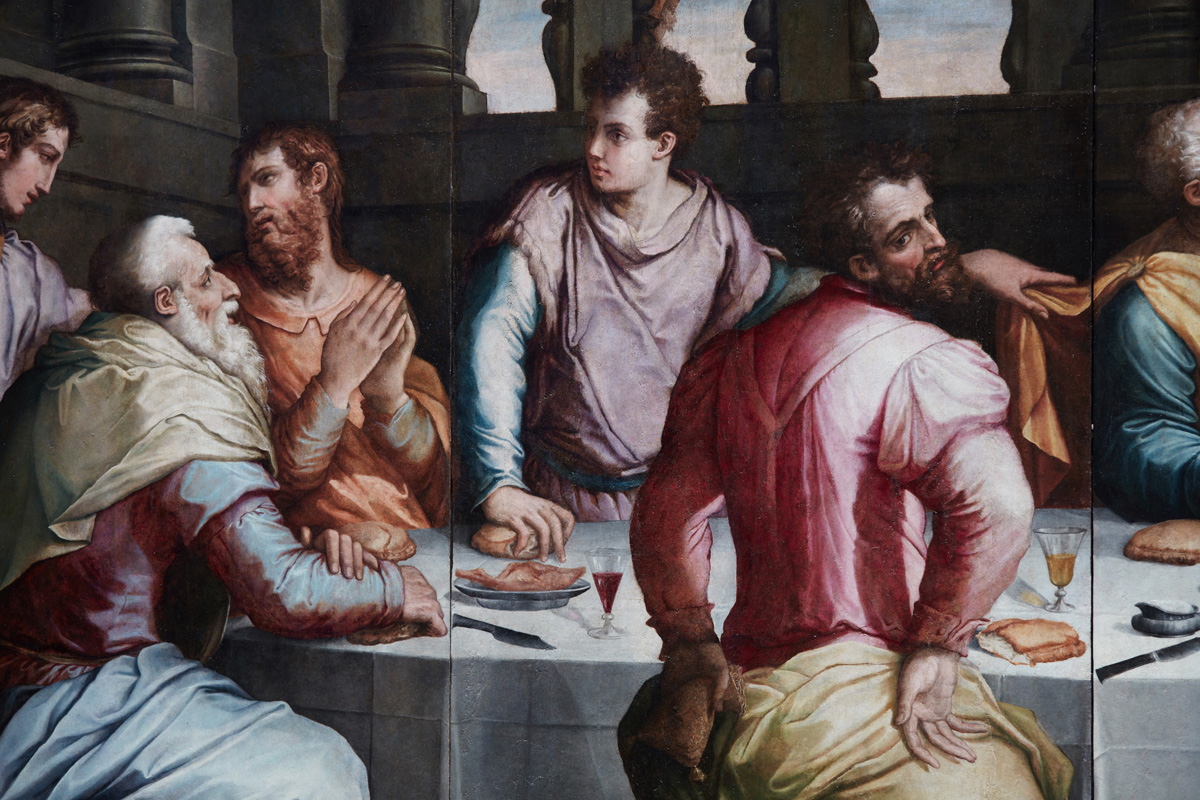 This context helps us understand the wine depicted in Florentine paintings of Christ’s final meal. In Vasari’s Last Supper at Santa Croce (1540s), the diners all share roast meat and hard bread, but water, white wine and red wine are also provided. These aren’t paired with different foods but appear to be matched to older and younger commensals, with red wine placed in front of the older men, white for the younger ones. Should you be wondering how white wine could represent the blood of Christ, a contemporary Protestant source gives us the impression that it didn’t matter: “In regard to the external form of the ordinance, […] whether the bread is to be leavened or unleavened, and the wine to be red or white, is of no consequence,” writes John Calvin in The Institutes of Christian Religion (first published 1536). 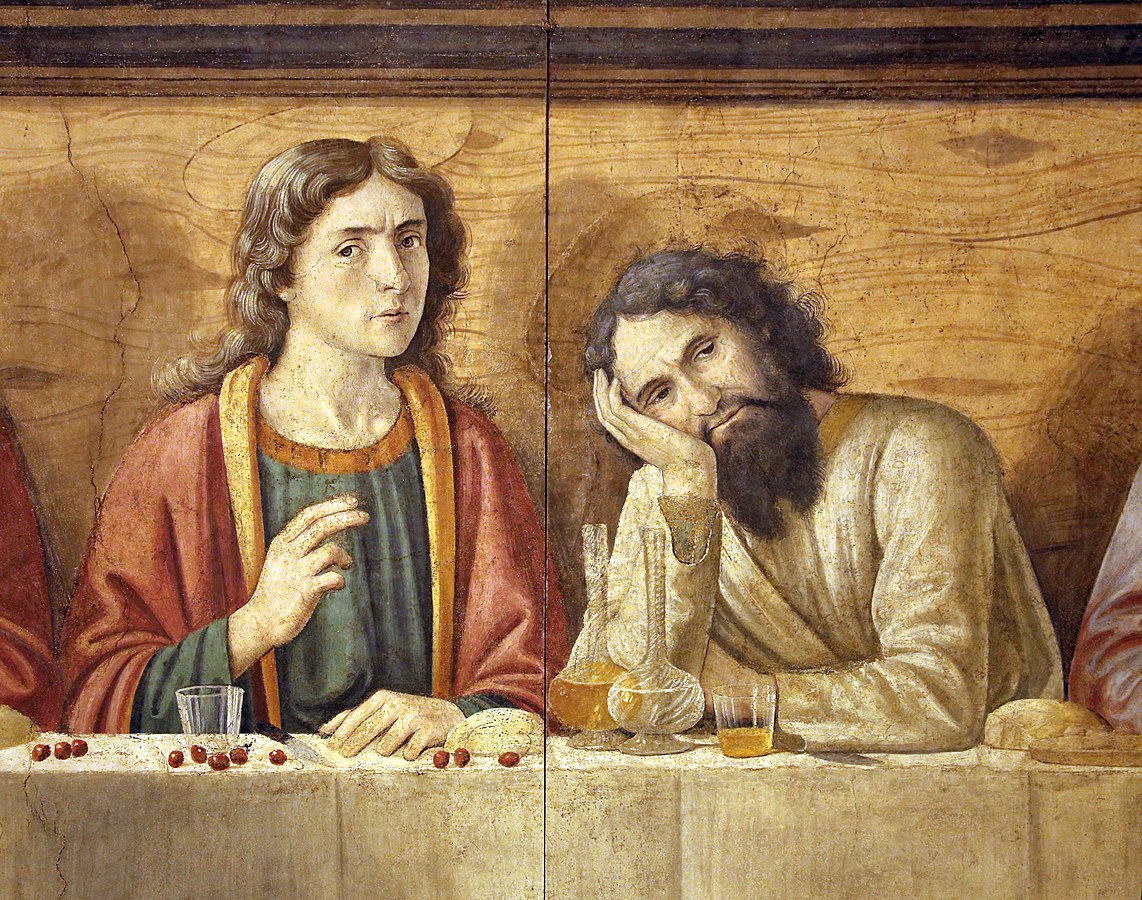 Domenico Ghirlandaio depicted a very yellow white wine at Ognissanti, along with bread, cherries, lemons, green radicchio and what appears to be a cheese plate (but could be lard). A few years later at San Marco, the same artist pared it down to just cherries, bread and red wine. Apparently, he didn’t get the memo from his sommelier. Andrea Castagno provides Christ and the apostles with only red wine and bread, getting down to the nitty-gritty of symbolism. 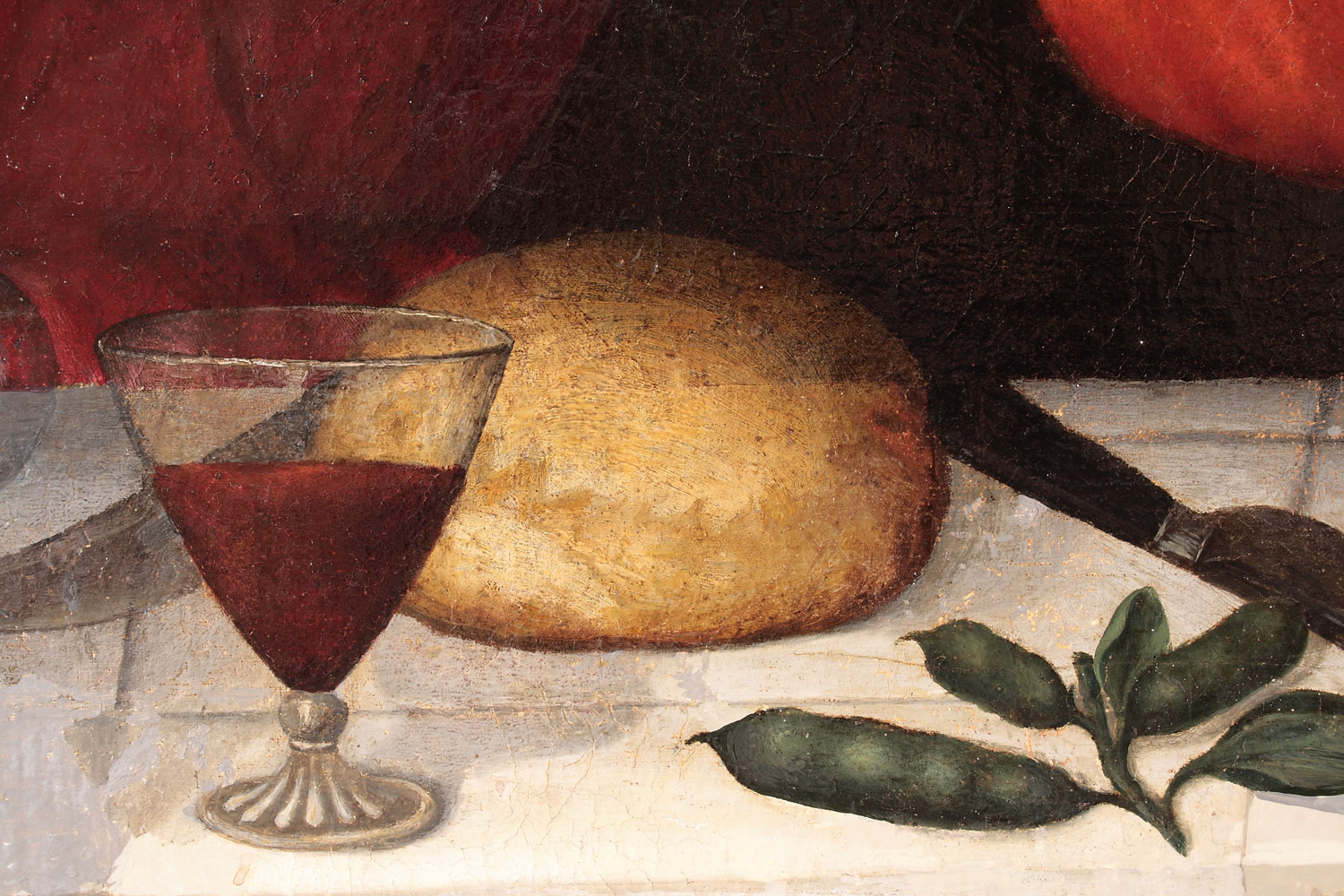 The Florentine Last Supper with the most food on the table is perhaps the least known: Plautilla Nelli’s large canvas made for her own convent in the 1570s. A roast lamb, loaves of (leavened) bread, lettuce and fava beans grace this spread, served with what appears to be a strong red wine. Might this wine have helped balance the nuns’ humours if they ate cold lettuce, which was also a symbol of abstinence?

So was the wine at these painted tables any good? Wine in the pre-modern period was “good” if it was “healthy”. By counterbalancing the qualities of hot, cold, dry and wet foods, wine ultimately regulated people’s physical and mental health.

While humoural theory has gone by the wayside*, maybe the way we choose wine isn’t so new after all. We still balance wine and food, often using the concept of contrast, such as a tannic red Chianti to cleanse the palate of greasy meat. Personality and mood also play a role; some nights we feel like an adventurous Ansonica, other times a mature Boca DOC. Florentine sommelier Filippo Bartolotta recently codified personality types and matched them to wine (Di che vino sei?, Giunti 2018). Twelve wine archetypes — coincidentally, the same number as the apostles—dictate the choices we make in wine, based on psychology, cultural input and maturity. This window onto the past suggests that we consider a new way of pairing wine, not only with food but with people, in which much more is at stake than mere taste. To the next person who raises an eyebrow at you when you raise your glass, let them know it’s for your health.

*Post-script. A recent visit to a top ranked Italian gastroenterologist has me think this theory is still applied today. After a diagnosis of “poor digestive fire,” I have been prescribed deer and Amarone (or other red wine aged more than five years), and absolutely must not eat “cold foods” such as salad and gelato.