Panzano is gearing up to host an art trail with a French feel. More than 30 sculptures will be exhibited in the Chianti town and across four iconic vineyards between June 22 and September 18 as part of Panzano Arte, a project championed by the village’s famous poet-butcher Dario Cecchini. From massive installations in Paris, along the Champs-Élysées and at Charles de Gaulle airport, and recent projects on the shores of Lake Como, Lille-born sculptor Nathalie Decoster is accustomed to attracting attention.

The artist’s work, often in bronze, explores the human condition, creating a universal language all of her own. Like a spiritual invitation, Decoster makes onlookers aware of the value of time: the time we give and receive, the time that makes up the moments in life. The title of her iconic sculpture Temps qui passe is the perfect illustration of her positive vision of the passing of time, a path that leads to wisdom and serenity. The human figure is an omnipresent feature, a faithful messenger that represents each and every one of us: moving within geometric shapes, it provides the codes we need to enter a world of serenity.

“We live in a modern society that is more and more worried about the lack of time. In my work, I endeavour to convey hope and show that during our lifetime we are actually progressing towards wisdom,” Decoster explains. “The atmosphere here in Panzano in Chianti resembles my philosophy. When exhibition curator Mila Sturm described the project to me and spoke about its sensitive and humanist approach that is so close to my own, I said yes without hesitation … There’s a real soul to this place and a sincere authenticity. There is a serenity here and a rare awareness of human values that I find particularly touching and which creates a real connection between Panzano and my work.”

The project is the brainchild of Dario Cecchini, the village’s most famous resident who defines himself as a “poet butcher”—he recently featured in an episode of Netflix’s popular documentary series Chef’s Table.

“The encounter [with Nathalie Decoster] was truly exciting, emotional and wild,” says Cecchini. “What spoke weren’t our heads but our hearts and maybe our stomachs too! I adore Nathalie because she sees the world with her soul and I believe that there is a great need to see the world with our souls. Nathalie’s art is a pathway to salvation.”

The purpose of Panzano Arte is to present art in public spaces with works that bear witness to a modern form of humanism and which aim to deepen local and international understanding of cultural and spiritual questions, as well as issues related to freedom, human rights and the environment.

This first edition of the Panzano Arte trail, which consists of 25 monumental sculptures and three extra-large format photos, begins in the town centre before leading visitors to the four participating wineries: Fontodi, Renzo Marinai, Tenuta Casenuove and La Massa. Eolo, Dans la Lune, Concrete, Rencontre dans le Temps, Marie, Espace Temps and Sentinelles will be clustered in and around Panzano, while the pieces to be exhibited at the wineries have yet to be announced.

Fontodi has been in the Manetti family since 1968. The certified organic winery south of Panzano unfurls over 130 hectares in the famous Conca d’Oro (“Golden Basin”), whose shape and situation enjoys an exceptional microclimate. Associated with the production of terracotta tiles for centuries, the estate focuses on the potential for growing Sangiovese grapes in the Panzano area.

Renzo Marinai, northwest of Panzano, started out in 1996 as a wheat farm to make bread; the six hectares of vineyards were a second step. Sangiovese, Cabernet Sauvignon and Canaiolo are the leading varieties, although a native vineyard comprises Mammolo, Ciliegiolo, Colorino and Foglia Tonda. Mozart plays nonstop as the wine refines in oak barrels. 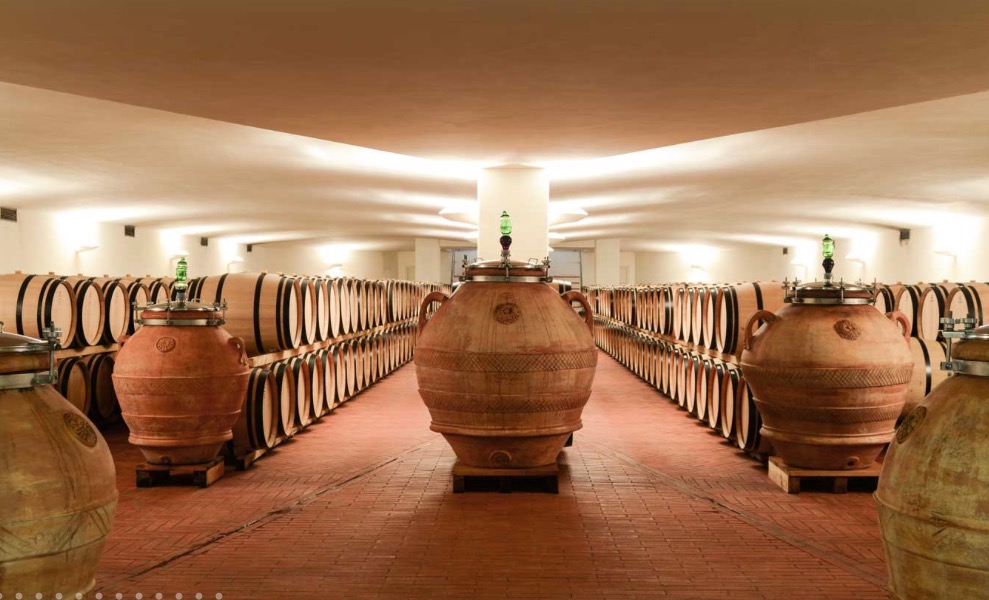 The barrique cellar (with terracotta amphorae) at Fontodi

Tenuta Casenuove, northwest of Panzano, has been owned by French wine group Vignobles Austruy since 2015. Twenty hectares of vineyards grow Sangiovese, Merlot and Cabernet Sauvignon in a mixture of clay, limestone and galestro soils.

Taste: Tenuta Casenuove Chianti Classico 2015, made from 80% Sangiovese, 15% Merlot and 5% Cabernet Sauvignon grapes from a parcel in the Pozzo vineyard.

Taste: Giorgio Primo 2014, a superbly balanced blend of Cabernet Sauvignon, Merlot and Petit Verdot that spends a year and a half in barriques.