Suvereto charms travellers with its medieval architecture, slow pace and green surroundings. Its wines are equally beguiling: scented like the Mediterranean maquis, refreshing like a dip in the nearby sea and sincere as a sojourn under the southern Tuscan sun. 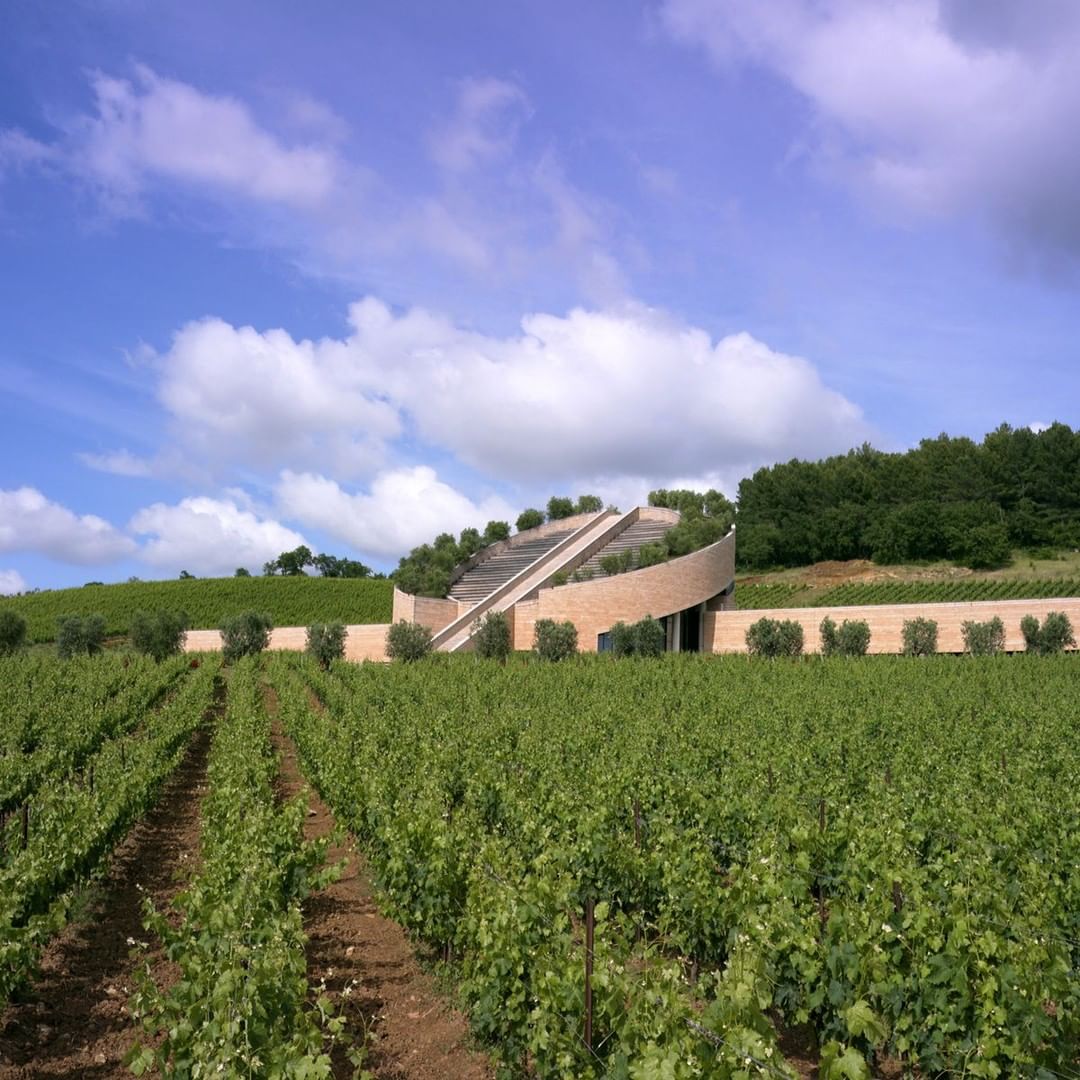 Petra provides an introduction to Suvereto’s wine scene. Situated southeast of the picturesque town on the other side of the river Cornia, the impactful circular edifice designed by Mario Botta seizes the sightline on turning through the estate’s gates. Somewhere between spacey and sophisticated, modernity holds the cards in this reinforced concrete construction, an ode to founder Vittorio Moretti’s industrial building empire. Climb the steps onto the roof planted with olive trees before following the gravity-led route travelled by the grapes from the upper fermentation room to the barrique tunnel, complete with a multi-coloured light show, delving deep into the hillside. All Supertuscan, the wines are stylistically similar, from the herbaceous Hebo, a Cabernet Sauvignon-Merlot blend with a dash of Sangiovese, to the distinctive signature label Petra, while the 100% Cabernet Sauvignon Potenti 2016 wooed me with its sublime perfume and salinity. 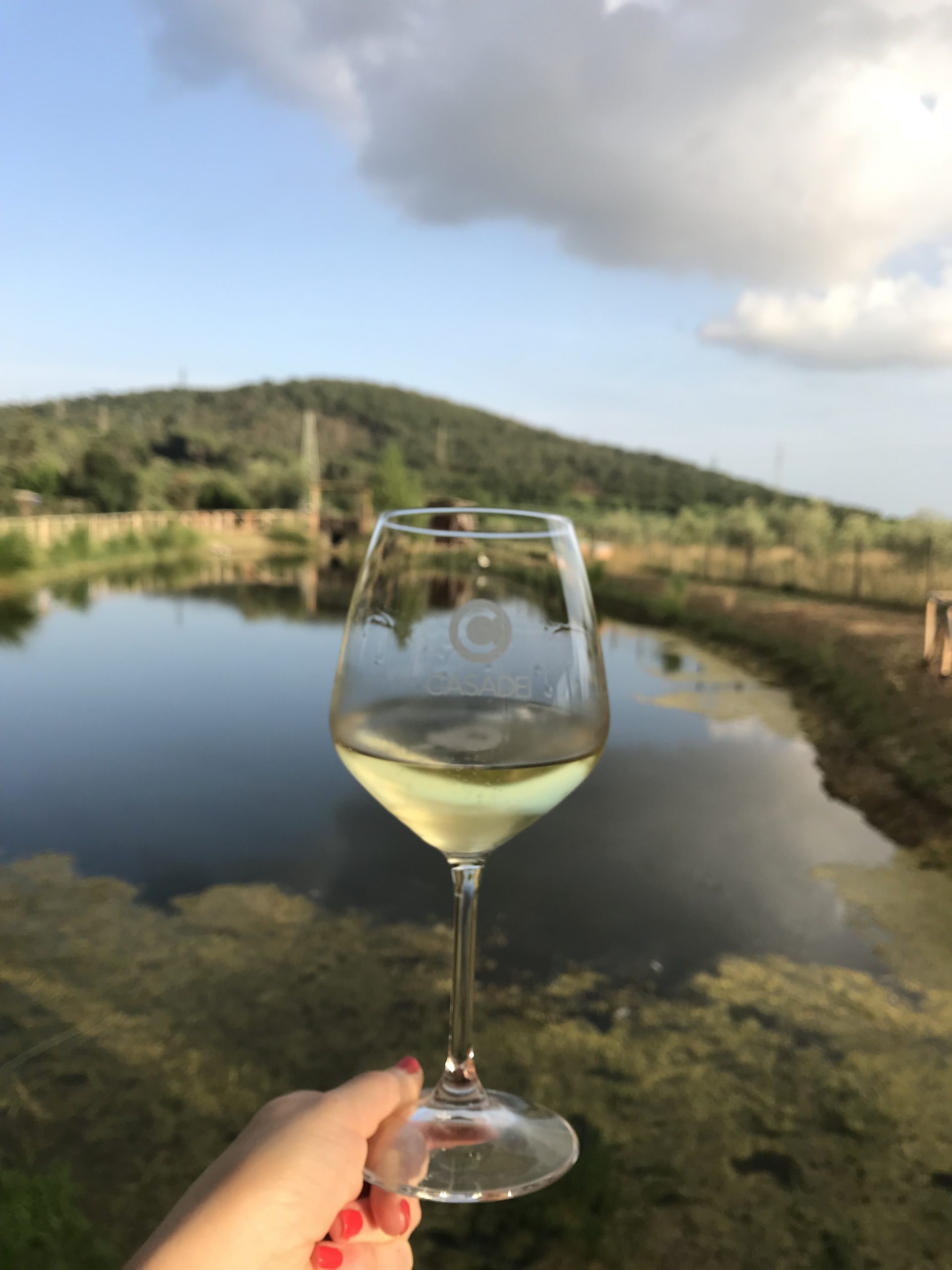 Raising a glass of Incanto Mediterraneo, an Viognier and Ansonica blend, at the official winery opening of Tenuta Casadei / ph. @helencfarrell

Next up was Tenuta Casadei, the product of a transatlantic meeting of minds between Stefano Casadei, of Castello del Trebbio in the Florence hills and Olianas in Sardinia, and Fred Cline, of Cline Cellars Winery in Sonoma, California. A five-minute drive due east of Suvereto, visitors are welcomed to this verdant paradise by the Porta del Sole, a striking porch through which natural light streams into the cellars below from the educational roof, planted with herbs, vegetables and fruit trees. Biointegral ethical farming principles are embraced here with hand harvesting and refinement in terracotta jars. Only 13 kilometres from the sea and 50 metres above sea level, international varieties Cabernet Sauvignon, Cabernet Franc, Petit Verdot, Merlot, Grenache, Mourvèdre, Syrah and Muscat line the immaculate 16-hectare marl and sandstone soils on the estate, which can be enjoyed during a lakeside picnic and explored by horse-drawn carriage. (Ursula, Dinette and Ulysses’ main occupation is ploughing the rows between the vines.) A purebred Cabernet Franc, Filare 18 2016 epitomizes the energy that can be achieved by biodynamic winemaking. 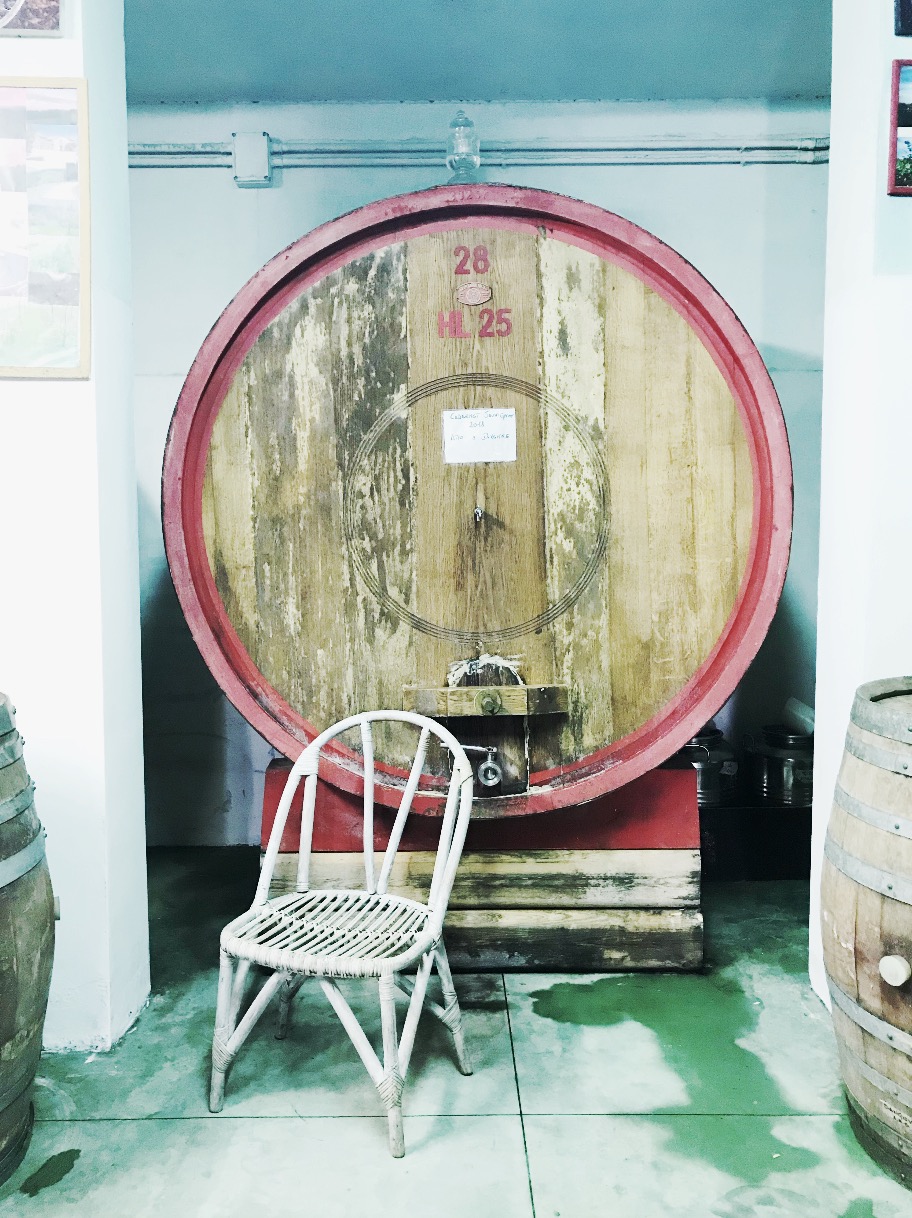 In the cellar at family-run Vigna I Mandorli / ph. @helencfarrell

Now hooked on Suvereto wines, a separate visit to the area began with a morning tour of Vigna I Mandorli. Reached along a winding route north of the town, this hilltop winery run by the Pasquetti family lovingly crafts very different wines to the cellars at sea level. A leafy expanse of Cabernet Sauvignon and Franc sweeps across the sea-facing slope at an altitude of 280 metres, which results in an intoxicating perfume of salt and spices, sun and sultriness. On the other side of the hill, Sangiovese grows silently surrounded by cork oak woodland and shrubbery, looking over the metal-bearing hills; the end product is a masterpiece offering a new perspective on the wild and wonderful nuances of Tuscany’s native grape. 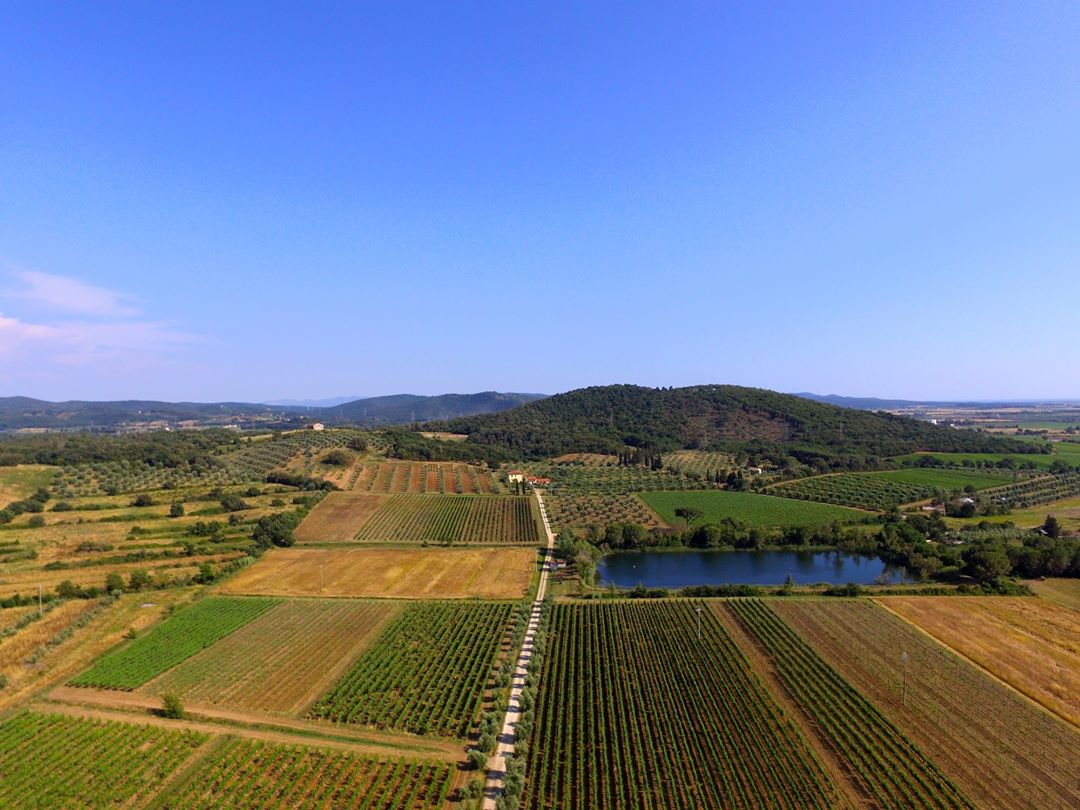 An aerial view of Bulichella

Bulichella has a fascinating backstory. At 22, Hideyuki Miyakawa left Japan in 1960 to travel the world by motorbike. In Turin, he fell in love with his future wife, Marisa, before becoming besotted with Suvereto and establishing Bulichella as a strictly organic farm in the eighties. A few minutes east of the town, the bucolic estate stretches over 42 hectares of land, producing beguiling wines that showcase Suvereto’s infinite personality. Poised and profound, Sol Sera is an onion-skin rosé that’s all blackcurrants and forest fruits; it represents the pinnacle of Tuscan pinks. There’s nothing entry level about the entry-level Rubino, an enduring Sangiovese, Merlot and Cabernet blend, which was Bulichella’s first wine, while Coldipietrerosse proudly flies the flag as a Suvereto DOCG with its plush palate and smoke and chocolate finish. The best is yet to come as the founder’s namesake label, Hide 2015, is revealed. The spiced Syrah nose is counterbalanced by outstanding freshness and acidity; it’s no wonder this wine struck gold in the 2018 Decanter World Wine Awards. 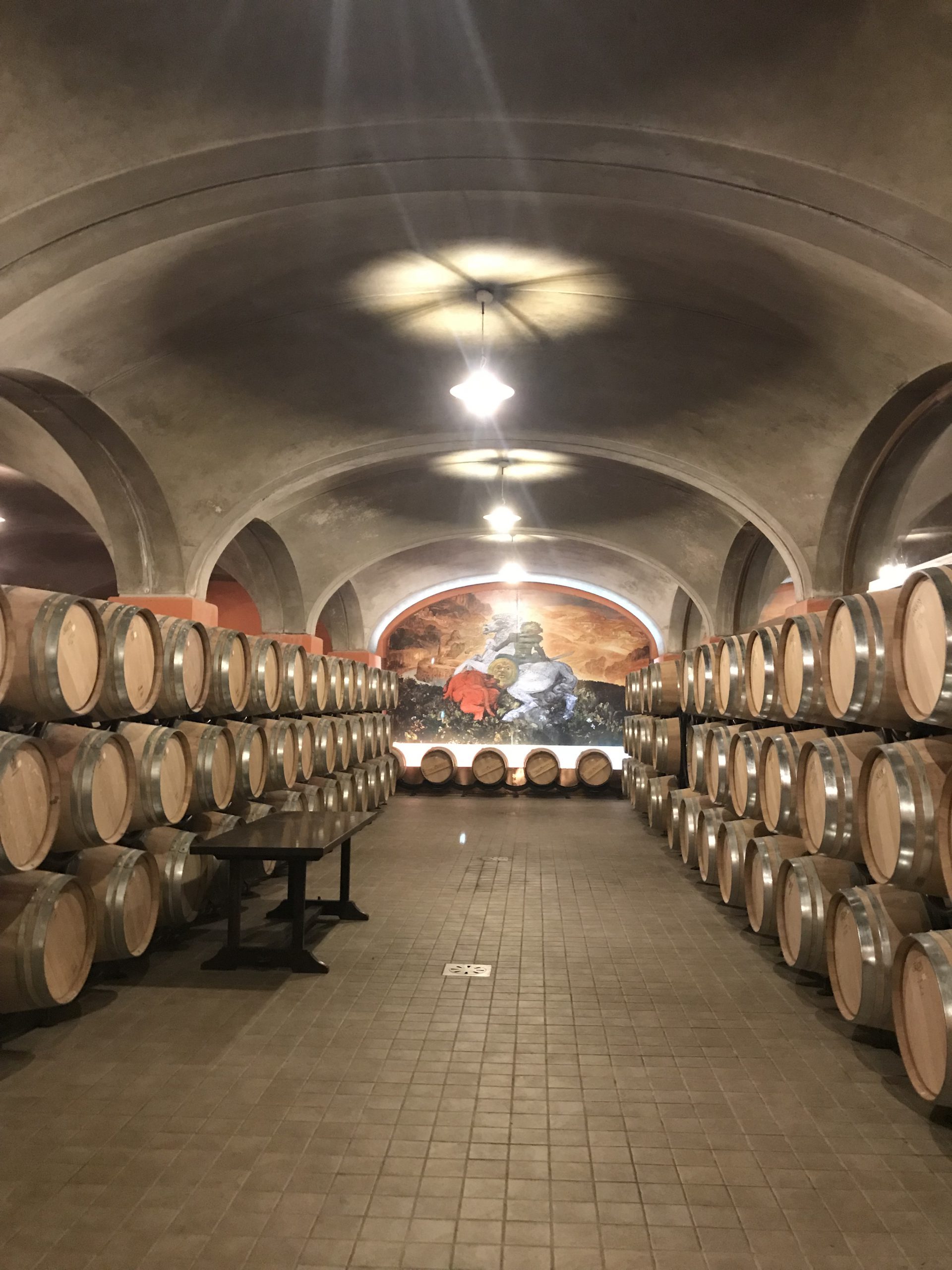 The final stop on my Suvereto travels was at world-famous winery Tua Rita, whose Redigaffi is held in high esteem as “possibly Italy’s greatest Merlot” by wine writer Hugh Johnson. While the 2017 is a delight to taste, complex and unparalleled, the cantina stands for considerably more than one iconic label, having pioneering the local wine scene since its inception in 1984. In the Notri area, southeast of Suvereto, lush vines glide across a gentle slope of sea level soil, which varies between stones and clay, lime and sand, all underpinned by mineral salts and ferrous residues. Syrah that’s subtly spiced (Keir 2017, fermented in amphora) and expansive (Per Sempre 2017, aged in barrique), saline Sangiovese (Perlato del Bosco 2017), and collectable international blend Giusto di Notri 2017, celebrating its 25th vintage, every bottle conveys this distinctive terroir that excites and keeps enticing me back.

With thanks to Filippo Magnani, who is based in Suvereto and has been organizing wine gourmet tours in Tuscany and Italy since 1999.