She was a talker, wasn’t she? Flannery O’Connor, "A Good Man is Hard to Find"

The Saturday before what would have been the Florentine journalist and war correspondent Oriana Fallaci’s 90th birthday was blisteringly hot; certainly not the sort of day you’d have wanted to do much walking around her hometown. Most of the city’s native sons and daughters had escaped to beaches for the San Giovanni long weekend.

Having no native-daughter DNA, I was out walking, more by compulsion than choice. The Allori Cemetery, home to the Fallaci family plot, was open, and paying Oriana’s grave a visit felt overdue, though tombstone flowers a bit too reverent. In the past year, I’d grown obsessed with Oriana—la Fallaci, in Tuscan parlance—while working on my M.A. thesis, writing in contortedly academic Italian on her extraordinary life and the brazen Islamophobia that emerged toward its end. Feigning researcher’s remove, I’d paid tribute, in the first section, to Fallaci’s journalistic career: to the stage-setting years spent aiding her Partisan father as a 14-year-old courier in Nazi-occupied Florence; to her guerrilla interviewing techniques practiced on world leaders; to the pigtails she wore in combat zones from Vietnam to Lebanon. Outshone, all of it, by her guttural-cry writing style (with the fried-by-cigarettes voice to match).

Equally, though, I’d aimed to tear down Fallaci’s late-life arguments in the paper’s second half. She spent most of the 1990s and early 2000s in Manhattan in solitude, writing a novel and quietly succumbing to cancer; in the wake of 9/11, then-editor of Corriere della Sera Ferruccio de Bortoli flew out to convince her to write a response. The result was an incendiary article, four pages and pocket change, decrying Islam and its “reverse Crusade” on the West. Written over two coffee and cigarette-fueled weeks, the article’s extended version was published as a book, The Rage and the Pride, which Fallaci called a “sermon”, and which became part of a trilogy that spawned at least three defamation lawsuits. The second half of my unremarkable paper linked the trilogy’s jarring rhetoric to Florence’s perennially stalled plans to build a mosque. Fortyish pages that amounted to “Fascinating life and fantastic writer, but, yikes, the xenophobia. What do we ‘do’ with her?” I was far from the first to ask.

What can be “done” with anyone in our era of hot takes passed off as whole truths? A thesis is not a clickbait-y op-ed, but there are definite similarities. In the snooze-fest medium of the academic paper—especially one written in a second language—having cut-and-dry conclusions and being nominally convinced of them is the deal. You’re not given space to question yourself, and yet you must balance this with a calculated humility that will flatter your supervisors. It’s a lot of wooden paraphrasing of peer-reviewed studies, a lot of “if x, then y, Amen.” Conveying actual humility—earnest thought that hints at truth, but admits to being approximated—is often met with scorn and middling grades.

Oriana Fallaci was not interested in calculated humility, nor in sucking up to scholars (she didn’t finish university, though more out of economic necessity than outright rebellion. But her working-class parents Tosca and Edoardo had raised her a reader). Her zingy assertiveness—“I’m an atheist, thank God”—propelled her popularity, and she suffered no fools, especially not dictators (or translators of her books). Her tomb is the largest and least decorative of those in the family plot at Allori, emblazoned with a succinct declaration of vocation, “SCRITTORE.” Writer. 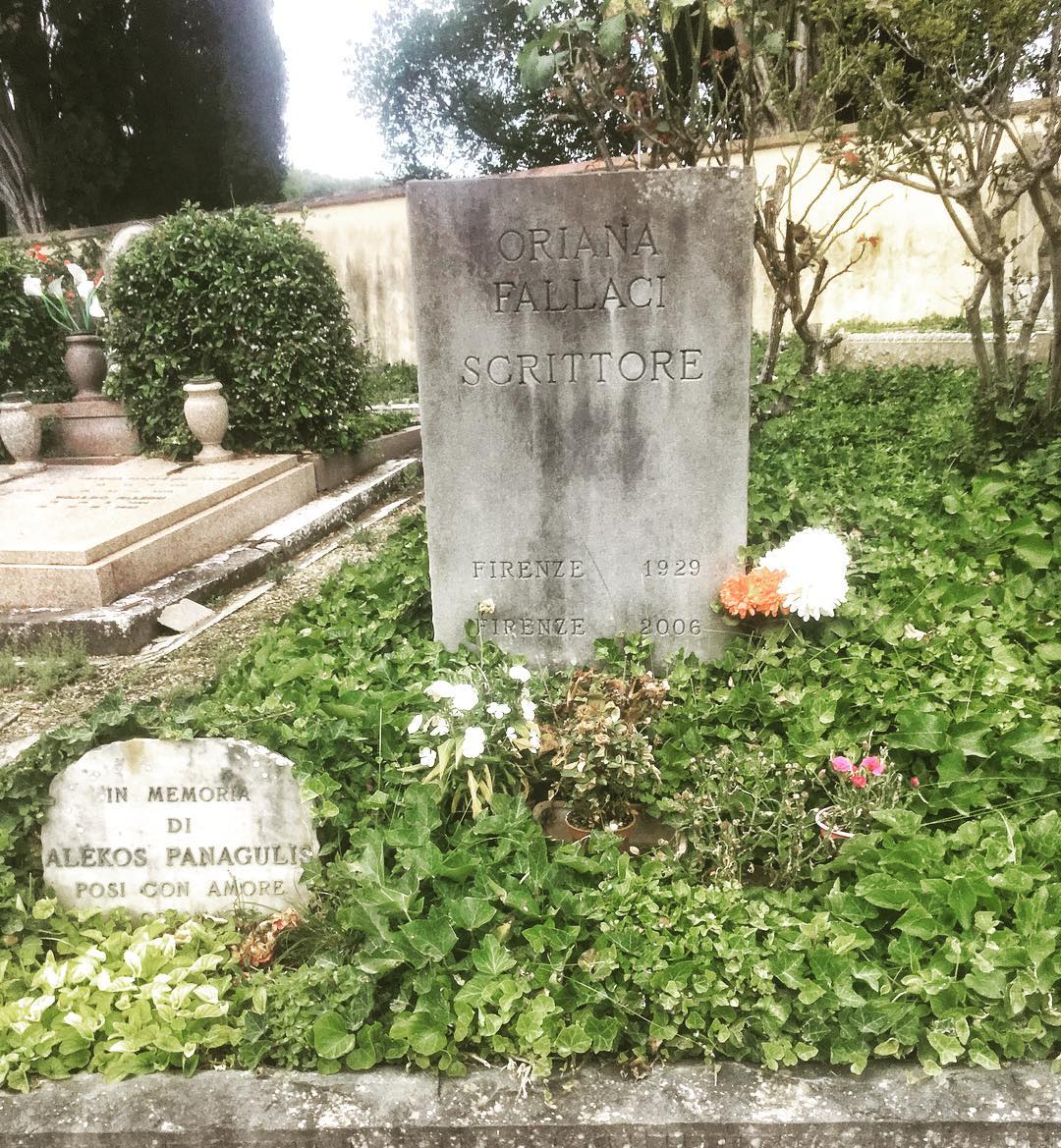 Her tomb is the largest and least decorative of those in the family plot at Allori, emblazoned with a succinct declaration of vocation, “SCRITTORE.” Writer. / ph. @verymarygray

And yet la Fallaci had glimmers of actual humility. (The trilogy, admittedly, is not the place to go looking for them.) In the introduction to Interview with History, a tome compiling her profiles for L’Europeo (Golda Meir and Henry Kissinger among them), she called journalism an “extraordinary and terrible privilege.” Of the number it does on its practitioners, she said, “It consumes you in a hundred feelings of inadequacy. (…) Anguish overtakes me, a fear that I don’t have enough eyes and ears and brains to look and listen and understand.” In the best of scenarios, she says, the journalist “brings a small stone that’s helpful in constructing a mosaic; if nothing else, you offer useful information that will make people think. And if you mess up, well, pazienza.”

Fallaci’s more tempered insights did not help my own hot take, so I didn’t touch them. I flew to California to finish my studies a week after my cemetery jaunt, still mentally fatigued after the thesis defense. Having registered for literature courses that sounded comfortingly vanilla, I was ready for a break from rage and pride of any side, ready not to think about Fascism and anti-Fascism, or immigration and terrorism, or feminism and racism, or radicalized fundamentalism, or the refusal to distinguish between it and an entire religion.

But no good literature course lets its participants empty and refill brains like vacuum bags. And my Fallaci study felt unfinished; it clawed at me just as the need to visit, if not venerate, her tombstone had. At the first meeting of one class, we were told we’d need to produce a biography-cum-book report on a contemporary or 20th-century author. There was no need for us to drum up any names, the professor assured us; he’d brought a ready-made list of suggested authors. All worthy of attention. All men.

This (brilliant, kind) professor said he had a “new talent” he thought would make a solid choice for me. I was already taking a second course, a monographic study of a canonical (male) author, taught by a charismatic (male) playwright. In a third course, we were reading two novels by celebrated Sicilians (men). At dorm check-in on day one of the program, the (male) coordinator had asked my peers and me sheepishly if we’d registered for “the course on women writers.” Because it had been canceled, so he was sorry if we’d already bought the books.

I bit my lip until the professor finished sharing my subject’s basic stats, then heard myself gambling with my first impression. Yes, this proposal seemed great, I said, but living in Florence, and pursuing my line of work, and having just read and written about Oriana Fallaci as journalist/critic/town crier, I’d like to backtrack and read her novels, and what I mean is I’d prefer to present on la Fallaci, please.

The professor looked unruffled, but said the campus library had only one of her novels, and it was in English, which wasn’t allowed. (Nor is that anything but a last-resort way to read Fallaci; what’s terse in Italian is often hollow in translation). But I could order another title, and chose Letter to a Child Never Born (1975), a meandering but not moralizing reflection on maternity as choice, not duty. The book has an amusing birth story: years before the 1978 introduction of the Italian law 194, which governs voluntary termination of pregnancy, L’Europeo publisher Tommaso Giglio had asked Fallaci for an investigative report on abortion. (She would later become a vocal opponent of the practice—aye yai yai—but the protagonist in Letter makes no conclusive proclamations, instead upholding grains of truth across all arguments).

Granted carte blanche and four months to complete the report, Fallaci took six and returned to the newsroom with no piece to speak of—just a folder stuffed with musings that later became the book. Giglio gave her the silent treatment for 15 days, and ultimately “never forgave me,” she shared in 1993. One wonders if Giglio ever read one of Letter’s famous passages, in which the nameless narrator tells her unborn child that if she turns out to be a girl, she must “fight to explain that the day Eve picked an apple, it wasn’t sin that came into the world, but a splendid virtue called disobedience.”

That was the thing for la Fallaci. Early in the preface to Interview with History, she warns the reader of how resolutely she believes that “apples exist to be picked”. She asserts that she “always viewed disobedience toward the oppressive as the only way to use the miracle of being born.” It was a sentiment that colored life beyond her craft: the best known of her love affairs was with the Greek anti-Junta revolutionary Alekos Panagoulis, whose ivy-shrouded memorial stone stands by her grave at Allori.

A wonderful Associated Press photograph, dated 1977, shows Fallaci perched in a Bergère chair, back to a mirror, head cocked to the side, English copy of Letter to a Child Never Born resting on her knee. She wears a suede skirt and a suspicious expression; on her feet are leather boots propped up on the seat, the heel of one cutting into the chair’s clean embroidery. I used it as the cover image for my little book report-like paper, knowing it couldn’t fully distill Fallaci’s legacy or erase the dangerous rhetoric she used toward the end. But I liked the portrait, and the boots defiantly planted on the Bergère, and thought my professor might, too; he’d appreciated the genuine reasons I’d given him for wanting to read more of her work. I had left just one out, which was that like Eve and la Fallaci and other life-loving, obstinate women, I hate nothing, if not being told what to do.