The father and son who left their mark

Florence is famous as an epicentre of artistic revolution and the Renaissance is justifiably the best known. Even in the last century, the city contributed a cultural tremor when the Futurists gathered at literary coffeehouse Le Giubbe Rosse. 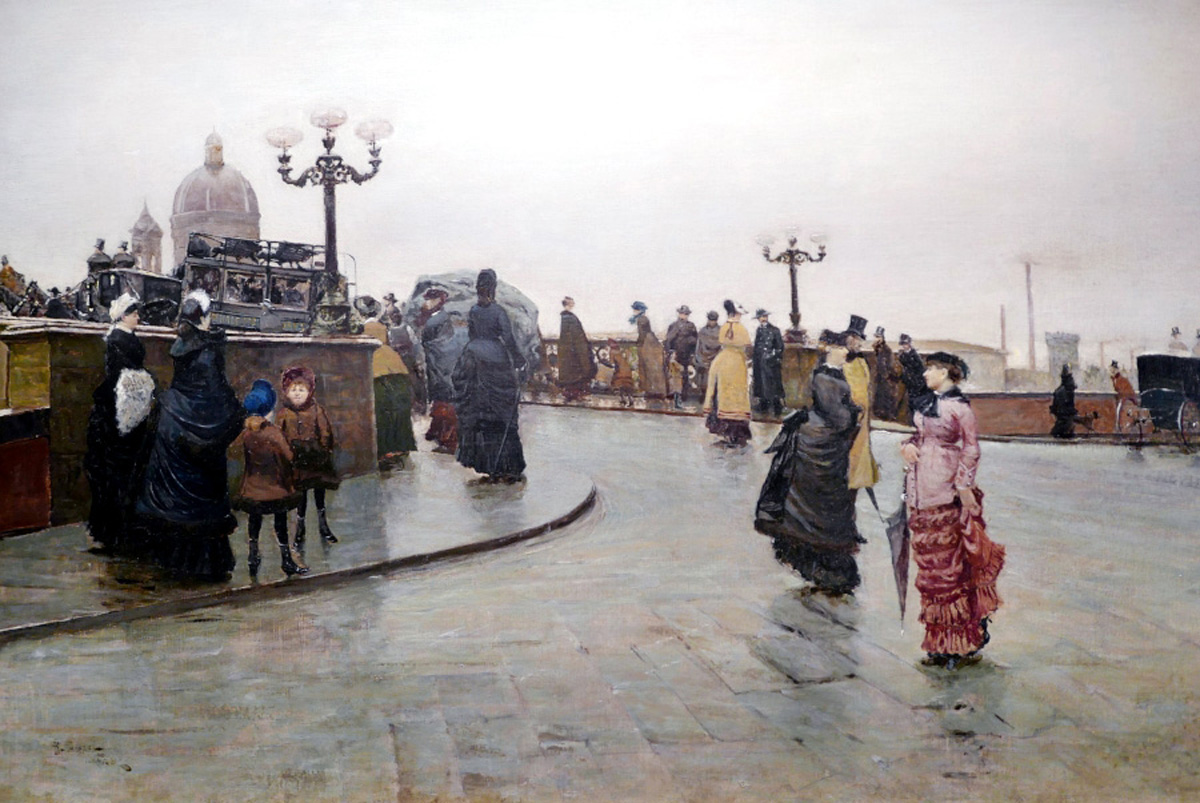 Less famous and less rancorous were the painters who, 150 years ago, shaped the first truly indigenous Italian art in the wake of the Risorgimento: the Macchiaioli. Until November 10, the exhibition at Palazzo Antinori shows the change they brought about by comparing a father and his son, Giovanni and Telemaco Signorini. Both painters, they nevertheless flourished in contrasting eras, for art and for Italy.

In 1855, Telemaco Signorini, a graduate of the city’s Accademia di Belle Arti, began frequenting the Caffè Michelangiolo in central Florence. Barely 20 years old, he had already begun to exhibit his work. He had strong literary interests (and had seriously considered studying literature rather than art) so his paintings then depicted scenes from novels, such as those by Sir Walter Scott, a writer admired by Italian reformists. Like many his age, Signorini was inspired by the movement for unification. Fellow sympathisers gathered at the Caffè, a meeting place for patriots and exiles. They mingled with artists and writers, and it was there that Telemaco met fellow reformists in art. They were critical of the establishment that, through patronage and prizes, effectively controlled public taste and the subject matter that painters and sculptors could legitimately tackle. The choice was heavily influenced by established conventions in portraiture, battle scenes and classical or religious imagery. Tuition was dry focused on drawing life models, as it had been since the Renaissance, before progressing to copying the masters.

Yet the country was changing and the artists who talked and debated at Caffè Michelangiolo wanted to include the arts in that process.

Their group included other like-minded painters, among them Giovanni Fattori, a veteran of Garibaldi’s volunteer army; Pisan Odoardo Borrani; Silvestro Lega, born near Forlì, who specialised in portraits; and Vincenzo Cabianca, from Verona, who preferred landscape.

Telemaco was one of the most forceful advocates for turning away from academic genres towards painting a bolder realism rooted in the modern life of town and country. With his contemporaries, several of whom are represented in this show, he began to believe that areas of light and shadow were the key components of a painting. This effect gave their work a fresh look with simple construction, reduced to colour contrasts modelled by direct experience of the dazzling luminosity of the local climate.

This exhibition offers a rare glimpse of Signorini’s artistic vision in transition. Like most of the paintings on show, the two oval canvases from about 1856 of bucolic views of Florence come from private collections, which means that these historic works are seldom seen in public. One was painted at San Miniato and shows a shepherd with his flock standing by a tree with his flock looking down to the river with silhouettes of the Duomo and Palazzo Vecchio picked out against the setting sun. 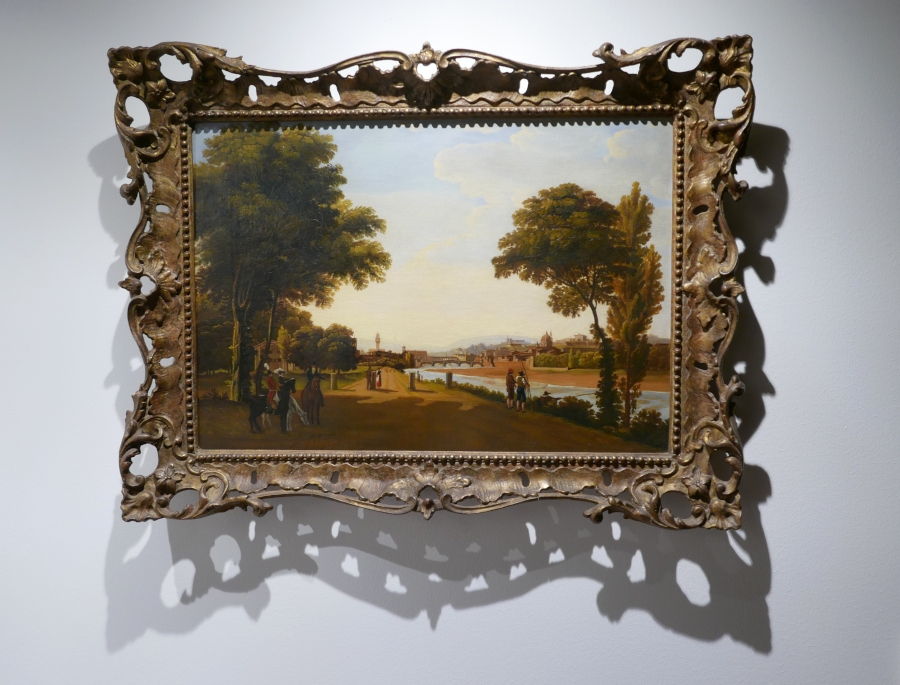 Pure landscape was still rare in Italian painting. Established rules stipulated that an allegorical or  religious event had to be included, in the manner of the revered 17th-century master Claude Lorrain. And even then, the view would be modified into an ideal location. Telemaco was well acquainted with that approach. Not only was it encouraged at art school, but his own father was a leading practitioner of the style. His students included his son and Cabianca.

Giovanni Signorini was commercially successful for the type of painting that his son was keen to abandon: port views with old-fashioned galleons riding the tide under golden evening light and theatrical renderings of events that promoted the benefits of grand ducal rule. The radical voices raised against them were getting louder. Father and son straddled different eras: Giovanni lived in a city dominated by the traditions of church and court, while Telemaco grew up amid political and social upheaval, with secular challenges to the old order bursting on to the streets elsewhere and, by 1848, on to the battlefields.

But the differences between Giovanni and Telemaco as artists were not always as great as they might seem.

The older Signorini painted the city too; there was a thriving market at mid-century among English and American visitors for detailed panoramas bisected by the twinkling Arno. Typically, he included contrived groupings in the foreground of local people in dated, picturesque costumes.

His sketches, however, could be as faithful to experience as any realist’s. To prepare the festive composition of teeming crowds and fancy, colourful cameos in Piazza Santa Croce on Fat Thursday (1846), he first made an oil study on paper of the square itself. The view of basilica, palazzos and skyline loggias is recognisable today and, being free of academic demands for a high finish, a modern artist could have made it. This small painting has a similar vibrancy and freshness to his son’s later views from the city, made in the spirit of rebellion. But Giovanni never intended it for exhibition: it was an aide-mémoire of architecture, perspective and colour. Giovanni would not have regarded it as a “work of art”.

With time, however, Telemaco would. His ambition was to close the gap between the vitality of the sketch and the formality of exhibition pictures. To this end, he began to paint out-of-doors to study the fall of light and shadow, as also did his Caffè Michelangiolo friends. A comparison with Giovanni’s work reveals how distinctive and different the younger artists had become. Vito D’Ancona’s Via de Maglio in Florence (1862–63) introduces a breath of fresh air. Like Telemaco’s La luna di miele (same period), which shows a young couple sitting beside the river in the shade beyond the city, the composition is simple and built around contrasting tones. The drawing in both blurs detail and gains solidity from light, shade and colour. The outstanding feature, however, is the application of paint in patches rather than fluid strokes. These marks become the building block for the image, an innovation that quickly became controversial. In 1862, the press labelled the group with the pejorative term, the “Macchiaioli”, because of the macchie (stains of paint) that distinguished their work.

The name stuck; indeed, the artists adopted it. Signorini’s knowledge was widened and shared by travelling frequently to London and Paris, where he established a wide circle of artistic contacts, including Degas, who became a lifelong friend. He was a writer and critic as well as an artist, publishing reviews and articles throughout his career. His facility with words may explain why occasionally he painted them into his pictures. He enjoyed their modernity, and the trattoria in Piazza a Settignano (about 1881) is festooned with letters, at that time a rare sight in art.

Telemaco also recorded with melancholy the parts of his birthplace disappearing during the Risanamento, the urban renovation that followed Florence’s designation as national capital in 1865 and which continued apace when that title passed to Rome in 1871. One location he mourned was the Mercato Vecchio (1882–83), soon to be cleared away to create the open space now called piazza della Repubblica.

The younger Signorini had many styles and subjects. Not all are on view in this show: he was, for instance, a campaigner for better conditions for the mentally ill and the elderly poor. But he remained a voice for progress, a catalyst for cultural change with roots planted in his Italian heritage.