Late October saw the official opening of the new Mercato delle Pulci, or flea market, in largo Annigoni. Nearly four years have passed since the stalls were moved from piazza dei Ciompi, which they had occupied for more than six decades, but until last month their housing in the clearing near the Sant’Ambrogio market was no more than temporary tenting.

The permanent new structure, which was inaugurated by mayor Dario Nardella, is instead made of steel and is intended to invoke the covered markets of 19th-century Italy. Designed by Florentine architect Alberto Breschi and costing around one million euro, it certainly makes the stalls look less nomadic, but has put pay to any hopes their tenants might have had of returning to their original home. 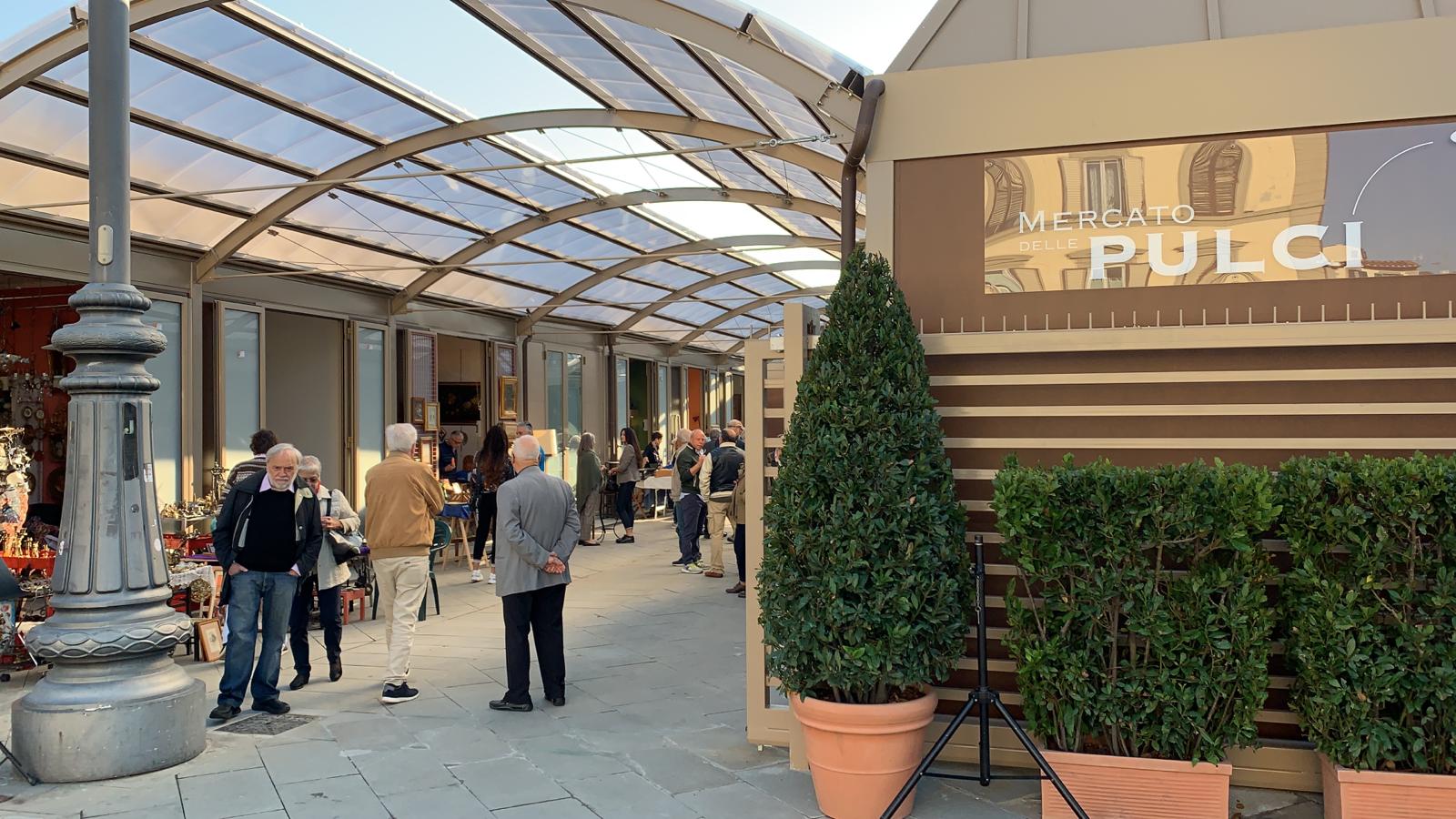 As early as mid-2015, the City of Florence had mooted the idea of clearing the market to make way for renovation work on piazza dei Ciompi. A few months later, however, initiative became imperative when asbestos was found in the sellers’ cabins. Local residents were reportedly glad of the exodus on account of the evening noise that was apparently generated from the square, though that probably owed more to patrons of surrounding bars rather than those of the stalls.

One of the stall owners is Paolo Giugni, who sells silverware and other ornate household items. He was not part of the market during its piazza dei Ciompi days and he could therefore only speak about largo Annigoni, but he found it hard to believe that the relocation had not cost them business. The Mercato delle Pulci used to be visible from the main street, he said, so people would presumably just peel off for an idle browse; now it is difficult to draw new clientele. “But,” he added, looking on the bright side, “the new covering keeps the rain off.” He shows me his wares, which include some beautiful, fatally tempting collector’s edition coffee makers. Antiques are his staple, but using a digital design programme he has cut a couple of accurate Florence skylines out of steel. “I make these for the tourists,” he laughs, “and then they’re bought by the Florentines.” 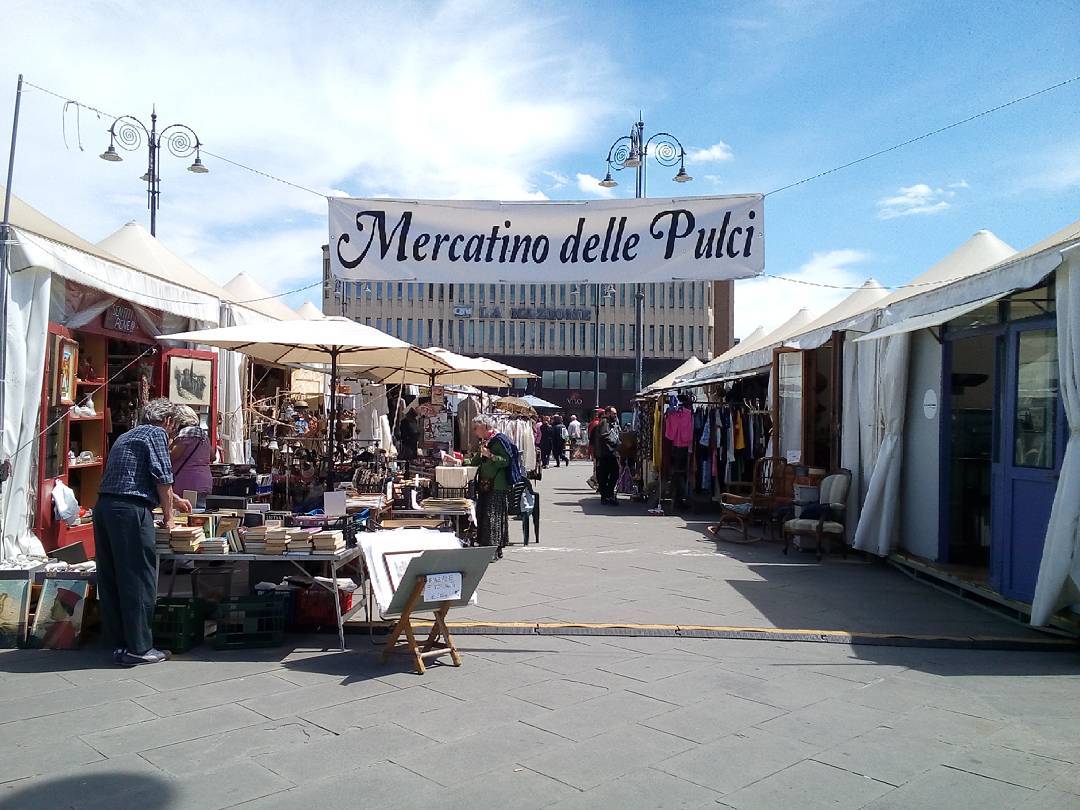 Again, this suggests that most business is done with habitués rather than casual shoppers, but according to Marzia Gabellini, another stallholder, it was ever thus, even in the market’s previous home. This comes as a surprise, especially in the weeks before Christmas, which one would think the exact time that a market seller might regret any loss of visibility. But for all her attempts at even-handedness, Signora Gabellini unequivocally prefers piazza dei Ciompi—“it was there for 63 years”—and has little good to say about her new home. “It doesn’t rain in here,” she says, gesturing to her cabin, “but it does there”. She points at the ground and then the arched covering that spans the structure, indicating the panel gap running along the length of its crown.

There is no doubt that the vacated piazza dei Ciompi looks better now than it did three years ago, when its post-market makeover began. It is now one of the centre’s greenest squares, and stalls selling trinkets, flowers or food spring up fairly often and unpredictably, especially now that the Christmas lights have been switched on. Antiques are sold here on the last Sunday of every month, and one wonders how this goes down with the new occupants of Annigoni. The piazza has clearly benefited from a gentrification drive on the part of the local administration, who are no doubt keen, in such a central, international part of the city, to present the best possible face of a square that has always carried a slightly dubious reputation. 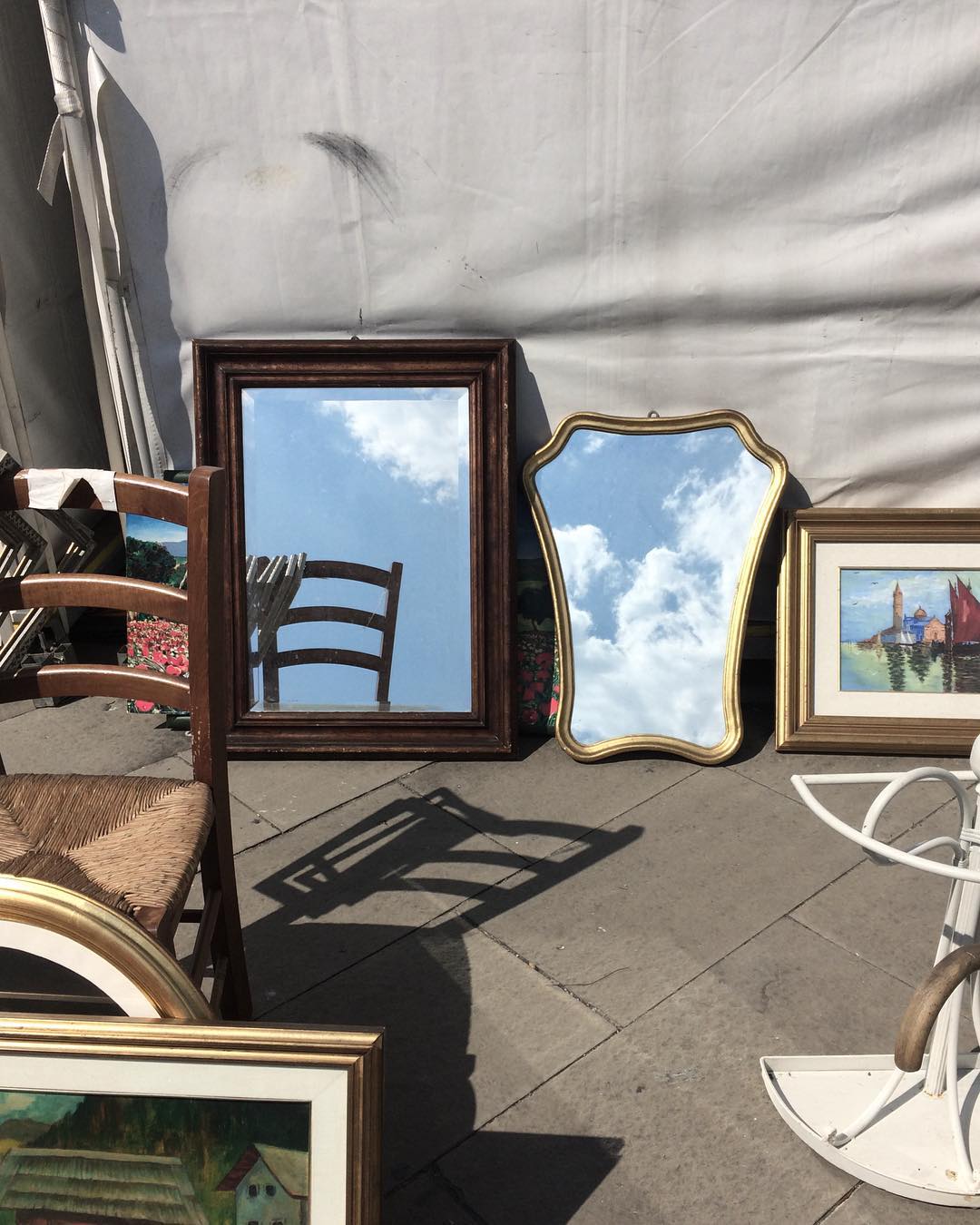 A detail from the piazza dei Ciompi flea market / @chiara.caroli on Instagram

The council, once apprised of the asbestos threat, could hardly have let the life of the flea market continue in the old cabins, which were built after the devastating flood of 1966 by order of the then-mayor Piero Bargellini. They posed a grave risk to the health of customers and a graver one to that of the vendors, who worked in the same static air every day. The question that a number of those vendors seem to have is why their new, safe shelter could not just as well have been erected in their original square which, pace Signora Gabellini, is certainly a better place than largo Annigoni for the attraction of trade. The answer, one assumes, is that the aesthetics of the new construction would have made an odd backdrop to the piazza’s famous Loggia del Pesce, a colonnade built by Giorgio Vasari at the behest of Cosimo I de’ Medici. It lacks the piled-up, jumble-sale charm that typified the old market and which typifies others of its kind, like the Sunday antiques market in piazza Santo Spirito.

As the hunt for stocking-fillers starts to intensify, it is a shame that such a treasure trove should have been moved ever so slightly off the beaten track. Now it is a touch harder to chance upon the antique books, the mini statuary and the wads of black-and-white postcards, one or two of which, no doubt, show piazza dei Ciompi in its old, innocent glory.