Problem of the soup

When my friend Cristina asked me to take care of her father, Antonio, the request came at the perfect moment. I wanted an excuse to extend my time in Italy. “All you have to do is make him dinner and sleep here at night.” Cristina made it seem so simple. “His caregiver, Anselmo, will come every morning and take care of him during the day.”

Antonio, at 97, has in the past greeted me with a deadpan wink as if we shared a private history. Communication has always been hard because he speaks no English and his dentures travel around his mouth when he talks. His family claim that they also have trouble understanding him, so it’s not entirely my bad Italian that makes conversation difficult.

He shouts at me in words I don’t understand, yet his unhappiness is clear.

At the last minute, Cristina tells me about a change in plans. She will leave on Saturday morning, so I will be on my own with Antonio for three days until Anselmo comes on Tuesday morning.

It’s too late for me to back out. Cristina doesn’t tell Antonio she’s leaving until she runs him a bath. He voices his displeasure, but within a few minutes Cristina is gone and he’s supposedly in the tub. But I see Antonio peering out through the sheer window curtains, fully clothed. I’m sure his bathwater has grown cold and I notice urine spots on the front of his trousers. I didn’t sign up for the personal care of an old man, but now it’s too late.

I get up early every morning to prepare Antonio’s breakfast: coffee, bread and butter, stewed fruit and 12 drops of Xanax in a glass of water. I make sure he drinks all the water. Then Antonio goes outside and cuts things. He has always loved working the land, but now he often prunes the newly planted trees. I’ve been warned that he needs supervision when armed with a pruning shear. Today, he attacks the rose bushes. They do need pruning, so I relax. When Pluto, the dog, cries out, I remove the rose thorns stuck in his fur.

I prepare a big pot of soup for our first lunch. It is not a successful culinary experience; Antonio only eats soft or pureed food. The vegetable soup is bland and everything on his plate is white: frittata with leeks and onions and steamed cauliflower. Antonio rolls his eyes at me as I serve him his lunch. He asks the question that will become his refrain: “When is Cristina coming home?” Pluto and the three cats are always ravenous, so they reduce the leftovers, but there is still a pot of soup that is impossible to store in the tiny fridge.

For dinner, I make chicken with too much vin santo, so the dish is overly sweet. I further puree the soup to give it a new life. Antonio moves the food around on his plate and asks for more bread. After dinner, I add the leftover chicken and the rest of the cauliflower to the soup. I begin to obsess about what to do with this unrefrigerated soup that keeps growing in volume. I’m in Tuscany where everything is recycled. Garbage is monitored and I don’t have the key to open the bins. A possible solution comes to me: I can bury The Soup! But what if someone sees me? Other solutions must be considered.

Antonio in his garden

The evenings are long. TV serves as a babysitter, even during meals. It’s like when I parked my young son in front of Sesame Street. I felt a bit guilty, but it allowed me some worry-free downtime. Even with the television on, Antonio likes to talk. On my past visits, chiming in occasionally with a sì was enough. Not anymore. He asks me the same questions repeatedly. “When is Cristina coming home?” “What time is dinner?” “What time are you going to bed?” I can understand most of his questions, despite his rolling dentures. But Antonio cannot make sense of my replies. My Italian accent is undecipherable to his ears. He shouts at me in words I don’t understand, yet his unhappiness is clear.

Antonio mocks me for always replying with sì! sì! sì! His face is red and his voice is loud. I lose my temper and resort to English.

“I’m doing the best I can. Serving your meals. Keeping you company. Take some responsibility. I know you are almost 98, but really! I’m trying to help. An occasional thank you would be nice. But all you do is roll your eyes!”

After my outburst, I feel worse. We are fighting about something I don’t fully understand. I feel guilty for yelling at an old man. At least it was in a language he doesn’t understand. Perhaps that makes it even worse.

As I’m making dinner, Antonio fills a pot of water for the pasta, instead of sitting in judgement at the head of the table. He spreads the cloth, sets the plates and the silverware. We eat in silence. I tell Antonio I’m going to my room to read. He may have found the leftover vin santo because later he comes into my room to say a jolly goodnight and a few other things I can’t figure out.

The next evening, I feel brave enough to deal with The Soup. The evidence must be destroyed before Anselmo the caregiver arrives tomorrow. A sieve filters out the solid bits while I force the liquid slowly down the drain. I take some to the henhouse and put the remains on a tin tray that I leave in the field behind the house—the wild boar eat anything and they graze at night. When Anselmo arrives in the morning, I crawl back into bed to watch a movie.

Cristina will return tonight. She will continue to care for her father until his ending. Staying with Antonio gave me the gift of being able to walk in Cristina’s shoes and to experience an important part of her life. Antonio is one of the last lucky ones. Cristina will continue to care for him, but there may be no one able and willing to care for her when the time comes. Being actively in charge of our last years remains my generation’s biggest challenge, as well as our final contribution. 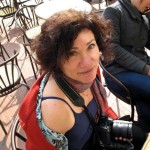