Spa sublimity in the Siena countryside

It was a bitterly cold January day as we sought solace at the spas sprinkled throughout the Siena countryside. The clue’s in the name: look for a terme (Italian for “thermal baths”) and you’ll divine water. Rapolano Terme, Chianciano Terme, Terme di Montepulciano and Terme di Petriolo all have singular healing properties and boast contemporary facilities suited for Tuscan travellers, whether you’re day tripping or staying locally for a week or more. The Florentine bathed on behalf of Toscana Promozione Turistica, Tuscany’s regional tourism promotion board.

Our first spa stop has a historical connection. Giuseppe Garibaldi arrived in Rapolano Terme in August 1867 to heal his Aspromonte battle wounds at the Terme Antica Querciolaia thermal spa. Hosted by Count Pietro Leopoldo Buoninsegni at the villa of Poggio Santa Cecilia, he wrote the following words to his friend Ruggero Barni: “The Rapolano Baths took off the last inconvenience in my left foot, and there was an instantaneous result; I have such a good opinion of these baths that I think I’ll remain for a few days more. If I could obtain a little more agility, I’d become as strong as before.” Legend has it that he left his crutch to the municipality of Rapolano at the end of his time in the town as proof of his healing. Today’s evidence consists of a statue and a commemorative plaque that remembers the local stay of the hero. Constructed between 1864 and 1867, the Terme Antica Querciolaia vaunts a warm-toned travertine marble exterior, which was (and continues to be) extracted from the local Serre quarries. The horseshoe shape at the heart of the complex embraces the natural springs, which gush forth into indoor and outdoor pools at temperatures that vary between 25 and 39 degrees Celsius, and treat respiratory ailments, arthritis and skin conditions.

Southwest of the well-maintained town of Rapolano Terme, with its picturesque doors and colour-washed palazzo walls, Rapolano Terme di San Giovanni is a hotel and spa experience wrapped into one. Wellness comes to mind on walking into the establishment as the pungent smell of sulphur engulfs the senses, yet is swiftly soothed by the plush contemporary ambience of cast-icon settees, exquisitely restored tiled floors and teak console tables. Guests wake up to a delicious organic breakfast that’s rich in antioxidants and packed with anti-inflammatory properties before devoting the day to relaxation in the constantly upgraded spa facilities. The natural thermal water bubbles at 39 degrees Celsius up from the earth into steaming scenic pools over the surrounding scenery—the impressive views, healing water and mud treatments assuage aches and pains, as well as having noticeable effects on dermatological problems from acne to eczema. Enjoy a light Tuscan lunch in the bistro that looks out over the pools and while away the afternoon hiking or biking around the local area, which is lined with quirky geological features, such as the nearby travertine marble ridge. 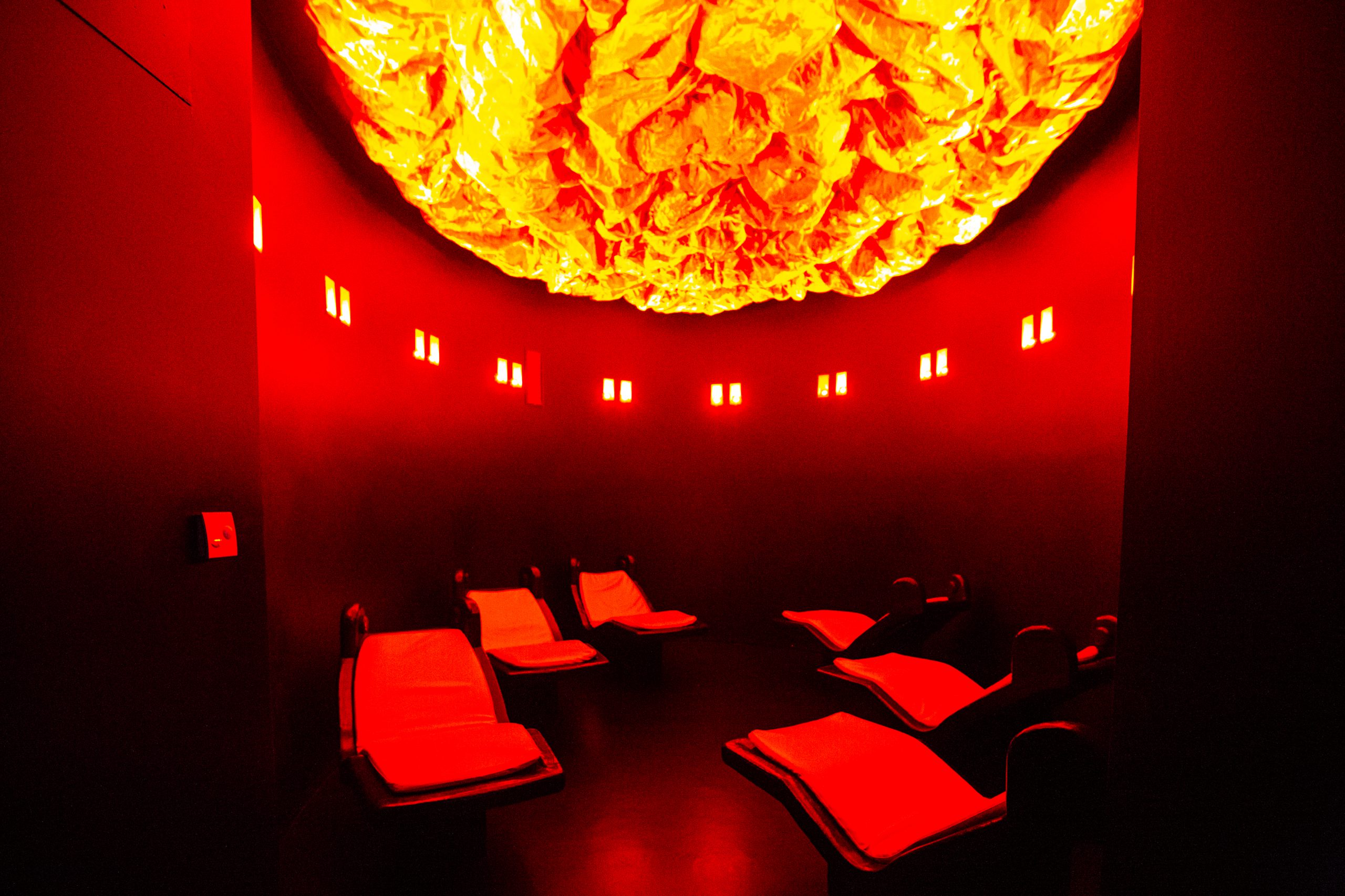 Cinematic charm sums up Chianciano Terme, a place greatly admired by Italian film director Federico Fellini, who set his 1962 surrealist comedy-drama 8½ in the town not far from the Tuscany-Umbria border. Hotels broadcast their heyday grandeur with Hollywood-esque oversized lettering on the roofs alongside daring terrace pools (there’s one with a voyeur-like porthole for glimpses into the depths): the effect is more reminiscent of southern California than Tuscany until the rolling hills and cypress rows teleport us back to central Italy. Frequented by those who “take the waters” to soothe liver and digestion ailments, Terme di Chianciano sits nestled in the bucolic Acqua Santa park, providing daily entertainment between imbibing, while restorative mud treatments take place at the separate Terme Sillene structure. A bastion of the Acqua Santa complex, the more modern Terme Sensoriali blends traditional spa treatments with eastern philosophy. Purify, energize, rebalance and relax in the salt and freshwater pools, the energy pyramid, melmarium, saunas, Turkish bath, aromatherapy showers, Kneipp bath and the intriguing room of inner silence. A healthy buffet awaits in the eatery upstairs, for which Professor Nicola Sorrentino has designed rainbow-style dishes based on colour therapy and nutrition. With four outdoor and three indoor thermal pools, the Theia centre is driven by the Sillene spring, whose healing powers were no secret even back in Roman and Etruscan times. Sunbeds and parasols can be rented for a half- or full day’s unwinding in the Tuscan countryside, with discounts for families. 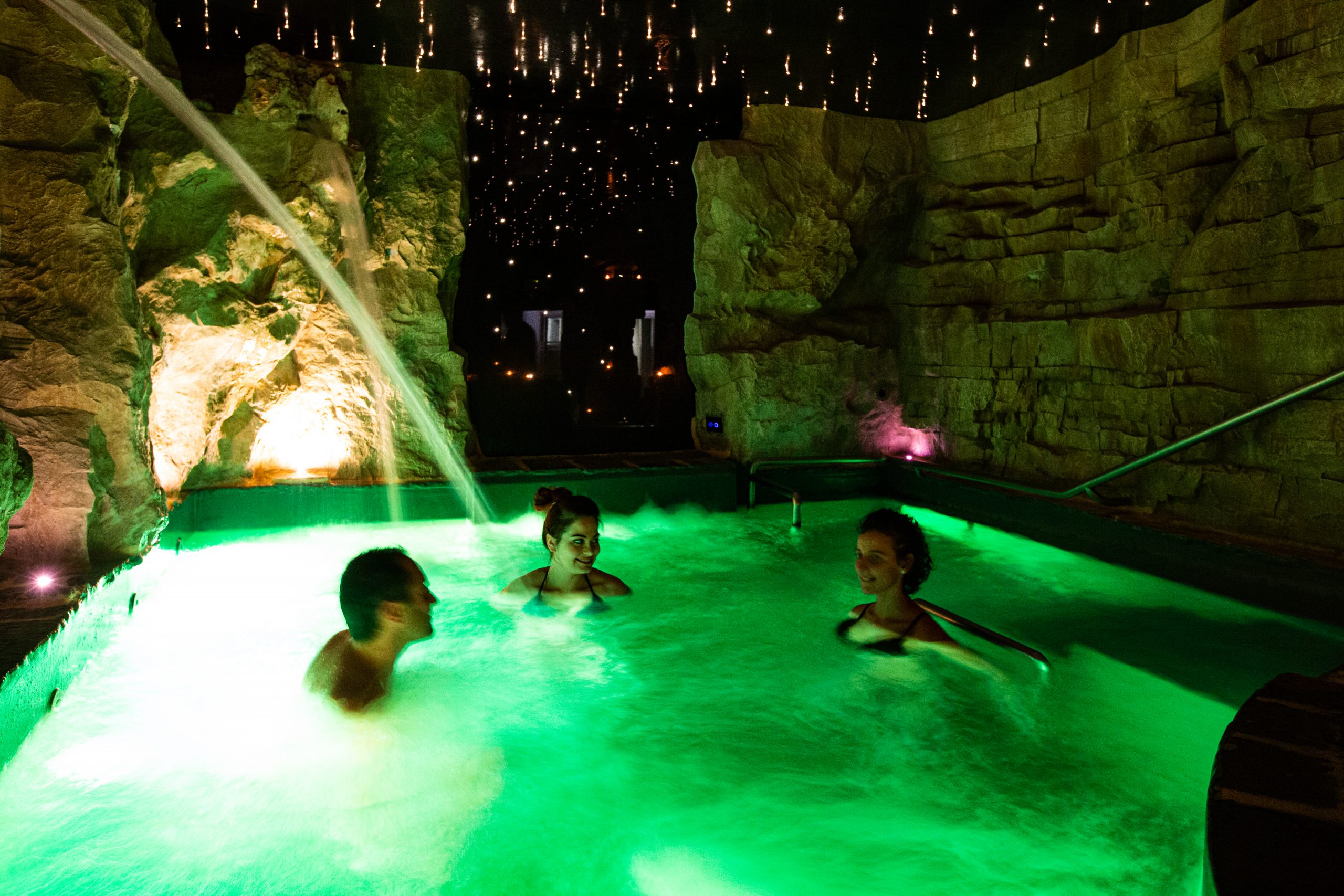 A ten-minute drive along the main road north from Chianciano and we reach Terme di Montepulciano. Here the focus is on health, prevention and wellness, with various centres for the treatment of respiratory and skin conditions as well as arthritis and skin complaints. Flickering with romantic candles, the lunar grotto contains a saltwater pool with jets to appease tired muscles and atmospheric coloured lighting that’s a balm for the soul. The surrounding countryside and nearby wine town of Montepulciano oozes into the treatments as olive oil and Vino Nobile massages are handed down to individuals and couples in pursuit of peace and quietude. Sip a herbal tea while unwinding in a heated chaise longue amid the green grounds of this professional health spa. 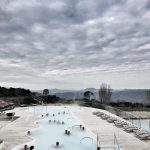 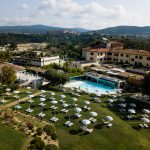 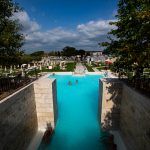 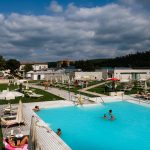 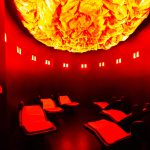 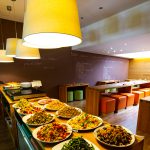 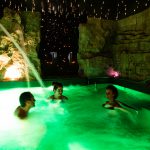 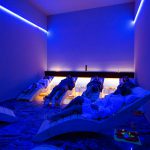 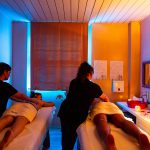 Ninety minutes due west, although the terrain means visitors must brave the long way round, the scenery is rather different in Petriolo. Immersed in nature between Val di Merse and the Maremma, two options are on the menu at these hot springs mentioned in an oration by Cicero and in an epigram by Martial. A stretch of the Farma river forms a natural bathing destination as the water bursts out at a reviving 43 degrees. Come summer or winter, locals and internationals arrive early in the day to secure their soaking spot in the chalk pools while gazing at the picturesque brick remains of the former fortified Petriolo baths and the scenic beauty of the Merse nature reserve. The trick here is to temper the time spent in the warm water with the occasional dip in the cooler flow of the Farma.

If the wild doesn’t appeal, head straight for the Terme di Petriolo spa establishment perched above the river. Constructed using natural materials on modern architectural lines, plunge into the therapeutic thermal pools, which regenerate mind and body as well as alleviating chronic illnesses and respiratory problems. If you thought the 43-degree ablutions were hot, prepare yourself for the mud treatments, applied at 47 degrees as an anti-inflammatory, analgesic and muscle-relaxing measure. It worked for Pope Pius II, who frequented Petriolo to heal his suffering associated with gout of the foot.