“Why do you have two moms?

The Cirinnà Law in 2016 made civil partnership legal, making Italy the 27th country in Europe to legally recognize same sex couples. Moreover, the law also governs the rights and duties of those who are having a stable relationship as couple—whether heterosexual or gay—providing the same access rights as a spouse in the event of incarceration or admission to hospital. Unfortunately, the law doesn’t include stepchild adoption, which means that a non-biological parent still doesn’t have equal legal rights to those of a heterosexual couple when it comes to their children.

Laura Giuntini is the Vice President of Famiglie Arcobaleno – Associazione Genitori Omosessuali – a national Italian association made up of gay families and supporters dedicated to asserting and supporting their rights. Five years ago, she and her wife, Valeria Cossu, became parents of the adorable Milo. 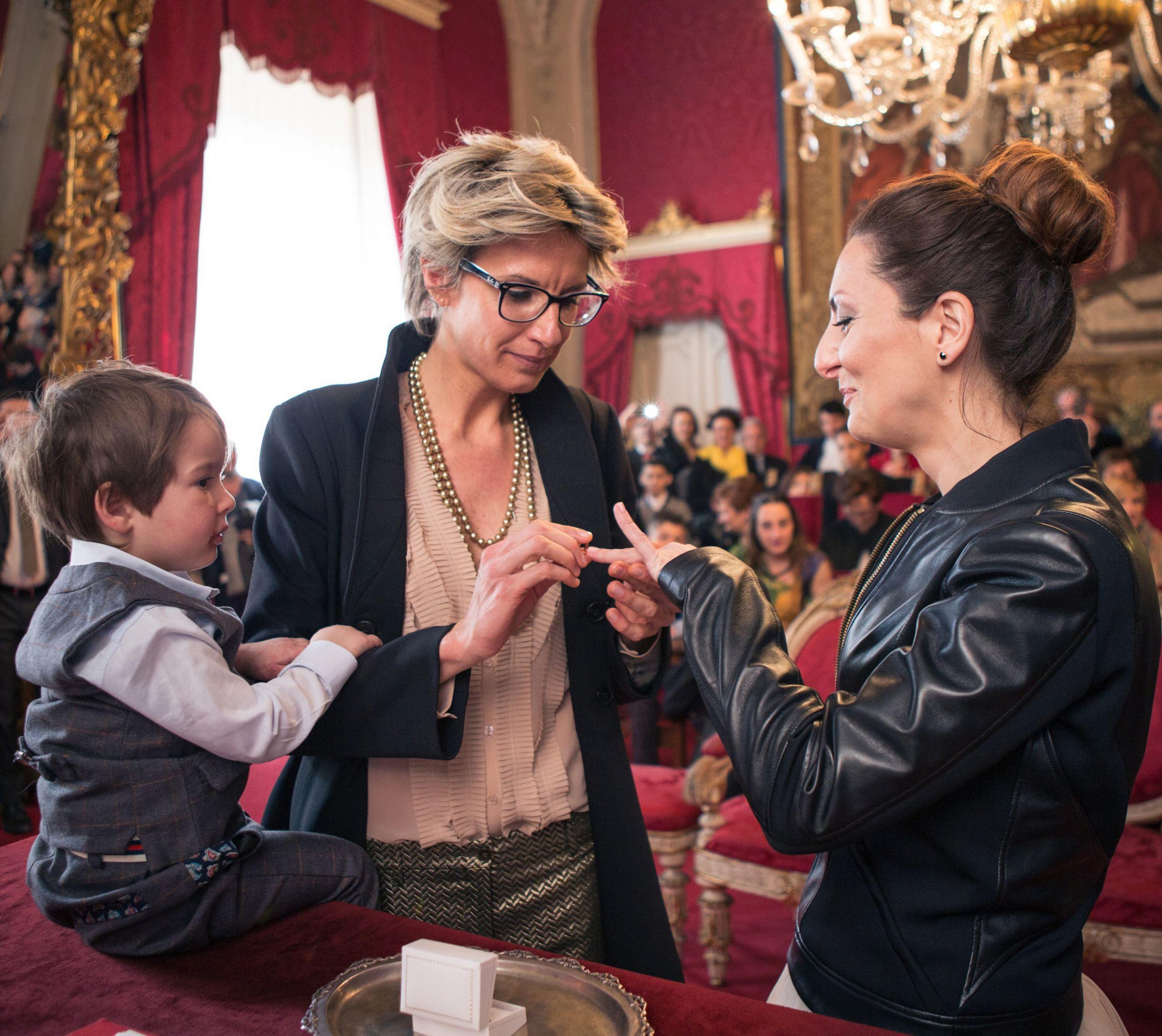 Vincenzo D’Angelo: What is Famiglie Arcobaleno and what is its purpose?

Laura Giuntini: Famiglie Arcobaleno is an association supporting LGBTQIA+ parenting. It is made up of many families who shares experiences, doubts and questions about family life. We are also engaged in activism for the recognition of the rights of the children of same-sex couples. It is the most controversial part of the Cirinnà Law, because we have rights but our children don’t.

VDA: So, how did you meet? How did you decide to have a child?

Valeria Cossu: We met ten years ago and it was love at first sight. We went to live together after about a year and in 2013 we decided to have a baby. Our relationship kicked into high gear right from the beginning! (Ed. they both laugh.) We discussed the possibilities we had, the association helped us a lot; we made contact with a clinic in Copenhagen where, after a series of medical tests and interviews, Laura did an intrauterine insemination. After one month, Laura was pregnant.
It was a very linear path, we were very lucky.

LG: Yes, we’ve been lucky, but it’s not that easy for everyone. In our association there are many couples who are struggling to have a baby. Treatments are different for each person and physical and psychological conditions affect many. Not to mention that they are forced to go abroad facing very high costs, while in Italy a married heterosexual couple can easily access treatments in their own country.
It’s not simple.

VDA: How did your parents react when they found out you were having a child?

VC: I was born and raised in a traditional Catholic family in Livorno. My coming out wasn’t a big deal for my parents, I guess they were expecting it, but when I told them about our family plans, they were speechless. They weren’t worried about the fact that their lesbian daughter was having a baby with another woman, but rather the reaction of their community. Livorno is not as big as Florence. Even when Milo was born, they asked me for some time to get used to it. When my father passed away right after Milo turned one, all he wanted to do in his last days was to spend time with me and his grandchild. My mom is now an adoring grandmother and she absolutely loves Milo.

LG: My parents were concerned about how people would treat our child and if they would face prejudice. But they only received empathy and support. People took inspiration from our story and used it to open up about their own situations.

VDA: What difficulties have you encountered as a same-sex couple with a child in Italy?

LG: I remember when a child asked him: “Why do you have two moms?” We were both there and we helped him to give an answer. That’s how children are, they need answers and they have no problem asking. They just want to understand how things work. Milo is very aware that he has two moms and he knows that there are families with a mom and a dad and other families like his. It is totally cool for him. And when he’s curious, he simply asks.

VC: We do have problems with bureaucracy. I am Milo’s mom but in terms of the law, I am nobody. If Laura goes abroad for work and I need to go to the ER with Milo, the doctor is legally entitled to prohibit me from being with my son. I need written consent signed by Laura to go get him from school and I can’t travel abroad alone with him. We are strong but it’s also very frustrating.

VDA: How has parenthood changed you?

VC: I honestly don’t remember my life before Milo. Our lives have changed completely. Oh, we have started arguing… we never did before!

After Florence, Arezzo, Siena and Pisa, this year the annual parade that brings our fight for self-affirmation, dignity and equality across the whole region lands in Livorno on June 20, 2020. Bring your bathing suit, your flip-flops and your pride! All the official information will be released on www.toscanapride.eu / @toscanapride on social media.