Edgar Degas and his Italian family

One of the earliest masterpieces by the 19th-century French impressionist artist and collector Hilaire-Germain-Edgar De Gas, who later adopted the simplified version of his name, Edgar Degas (1834–1917), hangs in the Musée d’Orsay in Paris. Titled The Bellelli Family, it depicts Degas’ relatives in the sitting room of their rented apartment in Florence’s piazza Barbano (today’s piazza dell’Independenza).

Between the ages of 22 and 26, Degas often stayed with the Bellelli family while he completed his artistic training, studying the Old Masters at the Uffizi Gallery. The proudly dominant figure in the Musée d’Orsay picture is of his pregnant aunt, Laure Bellelli, his father’s sister. She is standing with her daughters: pretty blonde, ten-year-old Giovanna, who is the only figure looking directly at the artist, and timid dark-haired, seven-year-old Giuliana, who appears impatiently ready to go and play. All three are sombrely dressed in mourning for Laure’s recently deceased father René-Hilaire De Gas, a wealthy banker and art collector, who can be seen in a framed red-line drawing hanging on the wall directly behind Laure’s head. Her husband, the liberal Neapolitan baron Gennaro Bellelli, who was forced into exile because of his activities in the 1848 Revolution, is seated side on with his back to the viewer and seems almost to blend into the mantelpiece, isolated to the edge of the frame. The family’s small pet dog lies on the floor behind him. 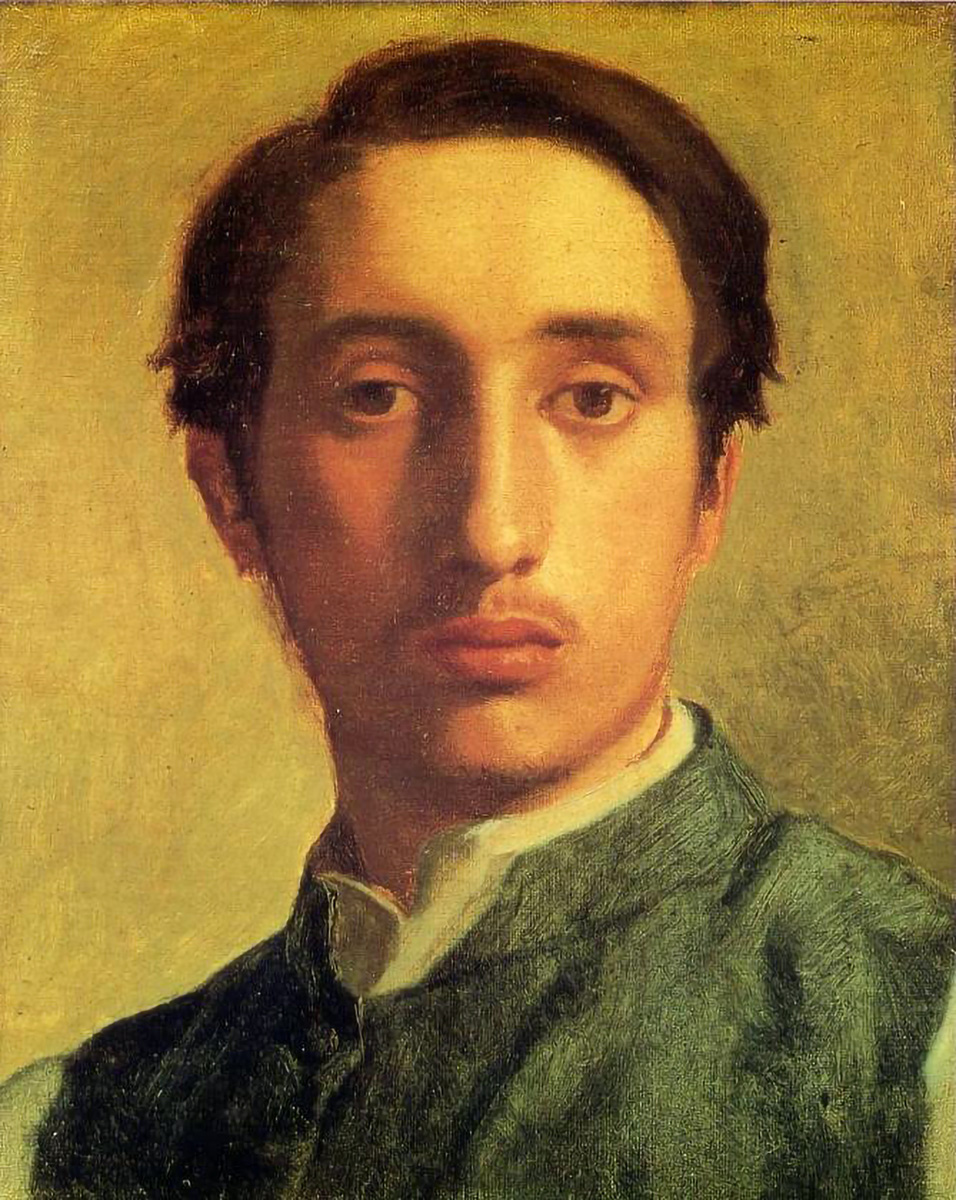 By portraying the physical distance between the couple, Degas mirrors the psychological tension between them, which also reflects in the ambivalent positioning of their daughters. This strain is borne out in a letter his aunt, of whom Degas was very fond, wrote to her nephew on his return to Paris. In it, she writes, “You must be very happy to be with your family again, instead of being in the presence of a sad face like mine and a disagreeable one like my husband’s” and confided that the baron’s “detestable nature you know, and who has no serious occupation, shall soon lead me to the grave”. This icy intimacy between the couple was compounded by Laure’s nostalgia for her world in Naples. This was well known within the family as the Degas scholar Theodore Reff tells us in his book Degas: The Artist’s Mind, noting that Achille, one of Degas’ uncles, recounts in a letter that, “The domestic life of the family in Florence is a source of unhappiness for us. As I predicted, one of them is very much at fault and our sister a little, too. Incompatibility of personality and background and as a result a lack of affection and leniency that enlarges like a magnifying glass the individuals’ natural faults.”

This would not be the only time in which Degas underscores the strain between the sexes as can also be seen in his painting The Young Spartans and other later works. In addition to the fact that Degas believed that the artist’s life was incompatible with marriage and never married, this probably fuelled his unfair reputation of being a bourgeois misogynist.

Degas did not complete this family portrait in Florence, but instead took his multiple sketches of the group members back to Paris with him in 1859, after asking his father to find a larger studio space, which would accommodate the large two by two and a half meter canvas he intended to exhibit in the Salon, but never did. In fact, Degas did not finish the painting until 1867 and kept it with him in the succession of studios where he worked until 1913, when he moved space for the last time and left it with his agent, Paul Durand-Ruel. Having been rolled up for years, the canvas was in a deteriorating condition, which Degas tried to remedy by partially restoring it in the 1890s, repairing tears and retouching damaged areas. After Degas died, almost blind, aged 83 in 1917, it was put up for sale as part of his estate and sold to the Musée du Luxembourg in Paris for 400,000 French francs.

During his frequent trips to Italy, Degas also painted numerous pictures of his Neapolitan relatives, beginning with the family patriarch, René-Hilaire, whom he painted in 1857 seated in the sitting room of his summer villa at Capodimonte (now in the Musée d’Orsay) and a portrait of his sister, Thérèse, with her husband and their first cousin, Edmondo Morbilli, completed in 1865 (now in the National Gallery of Art, Washington D.C.). Other family portraits painted in the mid 1870s on one of his last trips to Naples include that of a double portrait of his orphaned first cousin, Lucy, and their uncle Henri, in whose care the child had recently been placed (now in the Art Institute of Chicago), as well as the last of his great family portraits of another of his father’s sisters, Stéphanie Primicile Carafa, Marchioness of Cicerale and Duchess of Montejasi, with her daughters, Elena and Camilla (now in the Museum of Fine Arts, Boston).

In the 1870s, through his mother, Célestine Musson De Gas, a Creole from Louisiana, Degas would also visit New Orleans, where, at the time and unknown to him, one of his brothers, René, was busy depleting the family fortune. Whilst there, Degas produced a number of works, many depicting his “American” family members, but that is another story.