In 1829, at the peak of his superstar fame as the composer of more than 40 operas including L’Italiana in Algeri, La Cenerentola, La gazza ladra, La donna del lago, Il barbiere di Siviglia, his masterpiece, and his last opera, Guillaume Tell, the genial and exuberant Gioachino Rossini suddenly stopped writing music for the theatre. Why, at only 37 years old, he decided to do so is still a mystery. Some said he had made enough money to sit back and enjoy life, while others thought he was mentally exhausted from having to deal with capricious singers. Although for the remaining 40 years of his life, he continued to write songs, chamber, choral and sacred music, he was no longer the “Signor Crescendo” composer of the lyrical stage.

The musician now had time to dedicate to one of his greatest passions, eating, witnessed by his growing waistline as the years passed. A refined gourmet, Rossini loved to entertain, enjoyed cooking and experimenting with recipes he invented using the finest ingredients he could find, which he often imported from Italy and elsewhere. He also frequently dined at the best restaurants throughout Europe. His operas contained many gastronomical references, reflecting his philosophy: “Eating, loving, singing and digesting are, in truth, the four acts of the comic opera known as life, and they pass like bubbles of a bottle of Champagne. Whoever lets them break without having enjoyed them is a complete fool.”

One of Rossini’s closest friends was Marie-Antoine Carême, the celebrity chef of his day and the founder of haute cuisine whom Rossini had met at the Parisian villa of the banker, Baron James Mayer de Rothschild. In return for a game pâté Carême sent to Rossini while the composer was in Bologna, Rossini wrote a short aria for him. Carême is also reputed to have invented the most famous dish which takes his name, Tournedos Rossini. These filet mignons are pan-fried in butter, served on a crouton and topped with a hot, briefly pan-fried slice of foie gras, garnished with slices of black truffle and a Madeira demi-glace sauce. According to legend, the recipe obtained its name because Rossini had wanted the dish prepared at his table at Paris’ Café Anglais. As he worked, Carême objected to the maestro’s constant interference, simply to be told, “Et alors, tournez le dos” (so, turn your back). 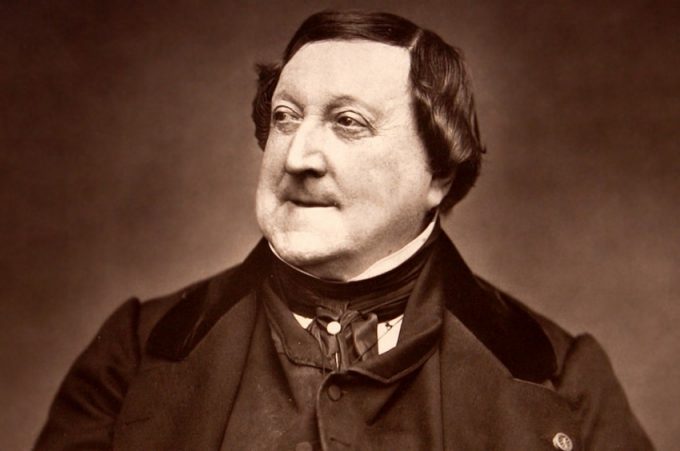 Rossini lent his name to countless other dishes, amongst them, cannelloni Rossini stuffed with truffles and foie gras, poached eggs Rossini, chicken Rossini, and fillet of sole Rossini. He is even mentioned in the French culinary classic, Dictionnaire Larousse Gastronomique. In fact, Rossini claimed he had only wept three times in his life: once when his first opera was a fiasco, secondly, when he heard Niccolò Paganini play the violin, and the last time, when his picnic lunch, a turkey stuffed with truffles, fell overboard during a boating trip on Lake Como.

Also a connoisseur of good wine, Rossini joked that, as a child, he had become an altar boy so he could drink the wine in church. Later, when he was a regular visitor to famous restaurants, he would meticulously order wine to complement each dish: Portuguese Madeira was served with cured meat, Bordeaux with fried food and Champagne with a roast, Spanish Alicante or Italian Lacrima with cheese and fruit. In an article called “Rossini in Slippers”, published in the American Art Journal in 1866, Albert Vizentini and Margaret Cecilia Cleveland tell us that, at home, “he keeps a little book of the contents of his cellar, and the regularity of the accounts would put the best butler in despair as each bottle of wine that is touched has its little red cross, and the maestro knows à merveille the quantity drunk at each of his dinners.”

Gioacchino Antonio Rossini was born in Pesaro on February 29, 1792, just three months after the death of Wolfgang Amadeus Mozart, his musical idol. His father Giuseppe played the trumpet in the local band but made his living as a meat inspector at an abattoir, whilst his mother, Anna Guidarini, a baker’s daughter, was a talented soprano. Often left with his grandparents because of his mother’s itinerant singing career or forced to be on the move because of his father’s outspoken political ideas, Rossini spent much of his childhood trailing around Emilia-Romagna. When his mother was forced to retire after contracting a throat ailment, the family settled in Bologna, where Rossini began studying the harpsichord, violin and horn as well as singing at the Accademia Filarmonica. In 1806, before he turned 15 years old, he began composing Demetrio e Polibio, his first lyric opera that debuted in 1812.

Women were another of Rossini’s passions. He adored them and, as Vizentini and Cleveland reveal, “He is always gallant with the ladies, and embraces them willingly. When they announce to him a visitor of the weaker sex, he hastens to change his wig, and to put on the one the best curled.” He married twice, but had no children. In 1815, after Rossini had already staged several successful popular operas, the beautiful and wealthy Spanish soprano, Isabella Colbran, was cast as the lead in his opera Elisabetta. She was eight years older than the composer and, according to Stendhal, beginning to lose her voice. The couple married in 1822, but separated in 1836 due to her extravagance, high-society lifestyle and gambling. A year after Colban’s death in 1845, Rossini married Olympe Pélissier, the 46-year-old French artists’ model and courtesan whom he had lived with since meeting her in Paris in 1830. He and his second wife lived for varying periods in Bologna, Milan, Florence and Paris, their last and longest home. Their musical evenings were legendary with guests including Franz Liszt, Giuseppe Verdi, Niccolò Paganini, Alexandre Dumas fils and Eugène Delacroix.

Rossini died aged 76 at their villa in Passy on November 13, 1868 and was buried at the Pere Lachaise cemetery in Paris. On May 1, 1887, following his exhumation, his remains were sent by train to Florence where they arrived the next day. Taking three hours to cross the city from Santa Maria Novella station, the funeral procession reached the basilica of Santa Croce, where a choir of 300 greeted it with “The Prayer” from his Mosè in Egitto. His Renaissance-style monumental tomb sculpted by Giuseppe Cassioli was completed in 1900.