Onions are my current obsession: I cry while cutting them, having tuned into the latest 6pm death toll, and my other half thinks I’m just preparing dinner.

One bone-chilling lunch at a time before lockdown, I caught up with a close friend at La Grotta Guelfa, the via Pellicceria watering hole with the curly green neon signage. Up the staircase we climbed into the cosiest of attics. Florentines were sucking in their “c”s under the brick-vaulted ceiling while tucking into warming winter fare, especially the “Just Steak” (plus a glass of Chianti) menu, a steal at 19.50 euro. That bistecca was the siren call that had summoned us to the 13th-century Guelph captain’s palace, but while my pal ordered and devoured the T-bone, meat wasn’t on my mind. Instead the onion soup (7.50 euro) grabbed my undivided tastebud attention. Served in a brown earthenware Tuscan dish, it was as close to soupe à l’oignon as one gets au-delà de the Marais: savoury melty onions topped with a black bread toast dripping with cheese that stubbornly sticks to the spoon, despite valorous efforts to dislodge it. 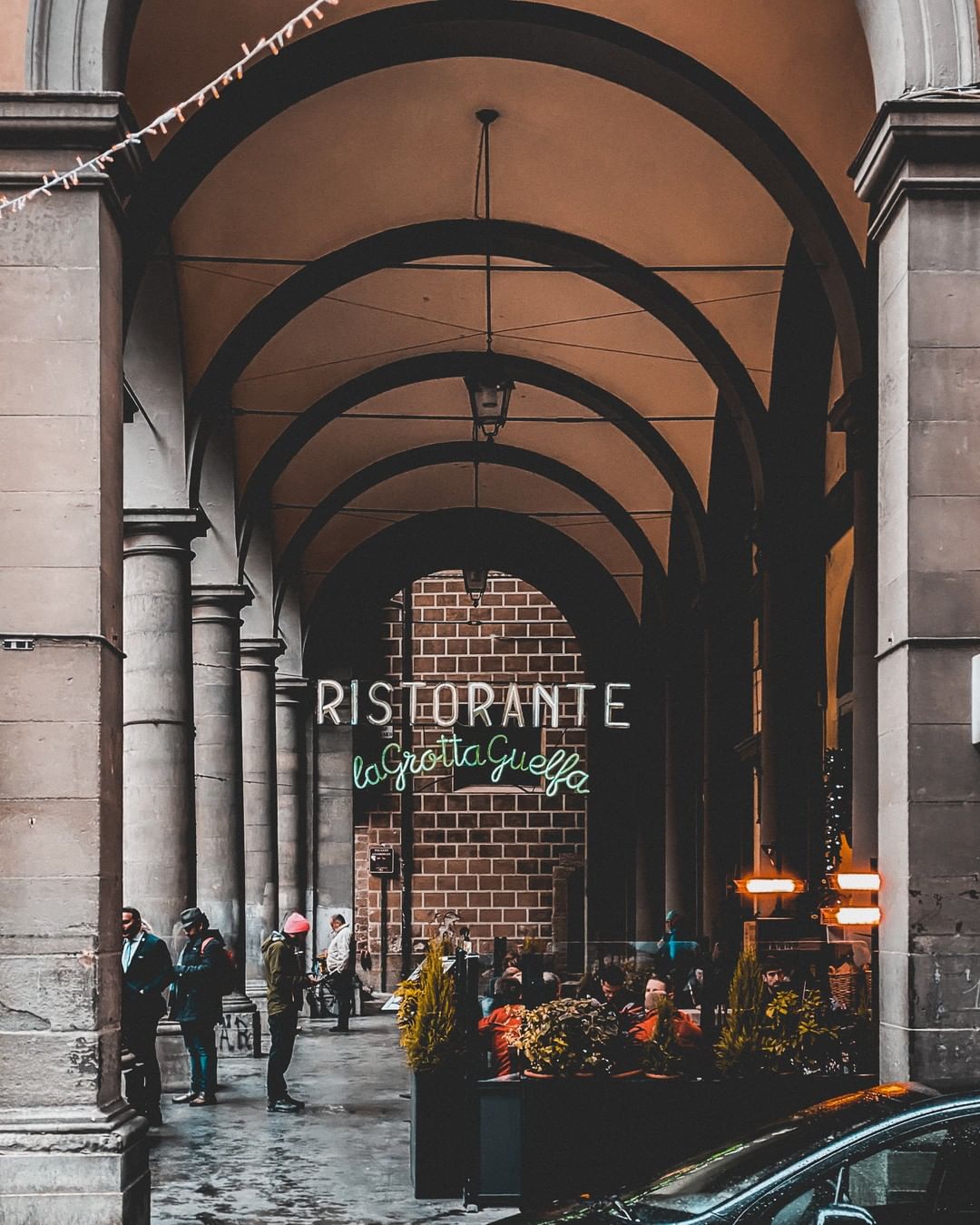 This bug about bulbs is nothing new. In my university years, I became fixated by Scot Carol Ann Duffy’s anti-conventional poem “Valentine”, which equated passion to the potency of the onion. (Not a red rose or a satin heart. I give you an onion. Look it up.) As Duffy was stepping down from the Poet Laureate position in 2019—the first woman, the first Scot and the first LGBT poet to hold the post—my onion longings stepped up a notch. At the turn of the year, the girls came over for dinner (at a time before virtual aperitivos), to be greeted with a French-themed soirée, duly developed around the genus Allium: onion soup, breaded escalopes and celeriac remoulade, plus B.’s homemade tarte au citron.

An enticing string bag of pink French Roscoffs were my bulb of choice (available from Unicoop Firenze), although Tuscan Certaldo onions would be equally at home in this soup—right now, any onions you have in your pantry will do. Local tradition calls for the variety to be melted down in hot oil before being strained and mixed with vegetable broth and a few potatoes to make a dense puree. A splash of local extra-virgin olive oil and a couple of Tuscan toasts complete the dish. Another dazzling literary reference springs to mind: Boccaccio jests about the tear-eliciting vegetable in Day Six of his Decameron:

Certaldo, as you may have heard, is a burgh of Val d’Elsa situate in our country, which, small though it be, was once inhabited by gentlemen and men of substance; and thither, for that he found good pasture there, one of the friars of the order of St. Anthony was long used to resort once a year, to get in the alms bestowed by simpletons upon him and his brethren. His name was Fra Cipolla and he was gladly seen there, no less belike, for his name’s sake than for other reasons, seeing that these parts produce onions that are famous throughout all Tuscany. This Fra Cipolla was little of person, red-haired and merry of countenance, the jolliest rascal in the world…

So special is the onion for the people of Certaldo that the vegetable takes pride of place on the town’s coat of arms. The red bulb stands out on a white background, while the motto declares everlasting love: “By nature I am both strong and sweet, and I please those at work and those at rest.” It’s reassuring to know I’m not alone in my bulbous obsession. 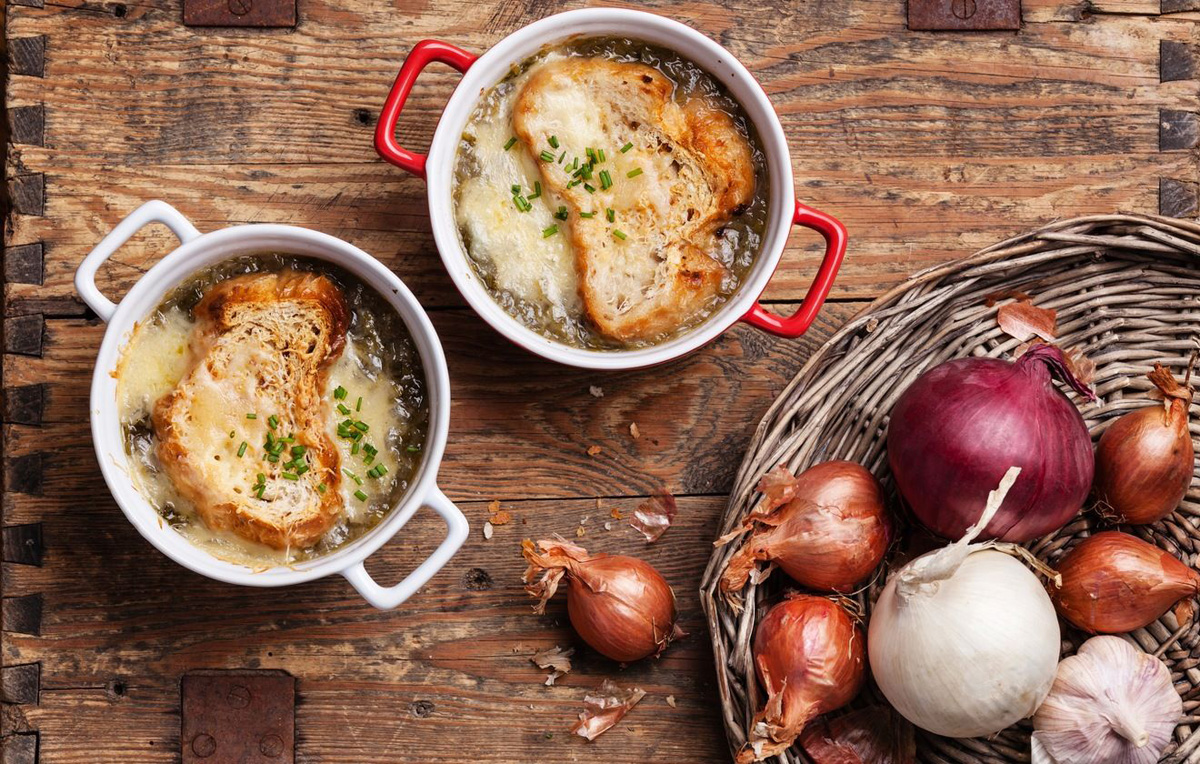 Pop a piece of bread in your mouth and start peeling the onions. (Other methods to curtail crying include freezing the onions for 15 minutes beforehand or to wear goggles, but the bread way always does the trick personally.) Remove the outer peel. Chop finely.

Cook the onions in the butter in a large heavy-bottomed saucepan over the lowest possible flame until softened, about 10 minutes. Stir in the sugar and cook for 20 minutes, stirring often, until dark, melty and caramelized. Take care not to burn them.

Sprinkle in the flour and stir well. Turn up the heat and pour in the beef stock. Pop on the lid and simmer for 20 minutes.

Meanwhile, prepare the cheesy toasts under the grill.

Season the soup with salt and pepper to taste and ladle into individual serving dishes. Place the cheesy toasts on top and serve immediately.