From towers to palaces: a walk through history

Florence is universally recognized as the birthplace of the Renaissance, yet many people are unaware that the city has a pre-Renaissance past of great cultural importance. This period is defined by buildings constructed more than a century earlier than those of Brunelleschi, Alberti and Michelangelo. You can appreciate the historical development of the city by exploring the dwellings of a small area beginning in the piazza dei Davanzati and extending to via de’ Tornabuoni, spanning about 500 meters and 500 years. What better way to celebrate the reopening of culture in Florence than a walk through history?

In the 12th century, about 100 towers filled the center of town. They were erected by clans with blood or political affiliation into dwelling-connected towers called società delle torri (tower consortia). An excellent example known as the Torre dei Foresi can be found on the corner of piazza dei Davanzati and via Porta Rossa. The tower is made of stone in a square plan and rises up about six floors (some towers reportedly rose to the height of the bell tower of Florence). The imposing tower is heavily rusticated, with little fenestration, and is punctuated by small square openings that were used for scaffolding and supports for wooden balconies or awnings. The Foresi Tower exemplifies Florence during a precarious time when clans used their towers for security and to express their power. 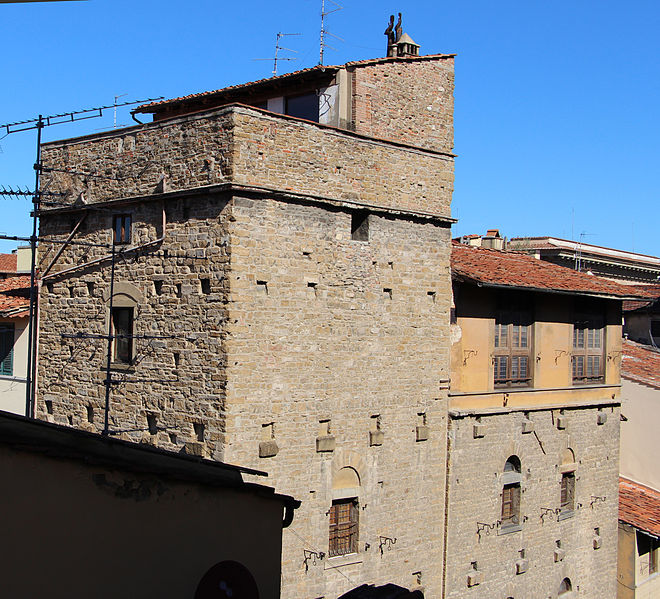 By 1300, the population of Florence grew to over 100,000 people. A series of laws were enacted to encourage order and dignity, express a shared spirit of civic pride, and to make the city il più bello che si può (as beautiful as possible). Towers were reduced to a uniform height and regulations were passed to dictate the appearance of buildings, including requiring stone cladding up to 10 meters on the façade of a palace. Unlike the feudal nobility living in castles in the remote countryside, a 14th-century Florentine merchant lived on top of his workplace and built a palace that could serve as both an office and a warehouse. This setup was nothing new, for the combination of shops and warehouses with flats above them was derived directly from ancient Rome and is still popular throughout Italy today.

A wonderful example of this construction is the Palazzo Davanzati, built for the wool merchant family Davizzi in the 1330s. The building is divided into three stories; the ground floor, used for business; second and third floors used as living spaces. The floors diminish in height and rustication as they progress to the top of the building, once crenellated and now crowned by an elegant loggia. If you look closely, you can still find medieval accoutrements on the building such as iron rings for tethering horses, brackets for torches and horizontal rails for hanging tapestries and banners. 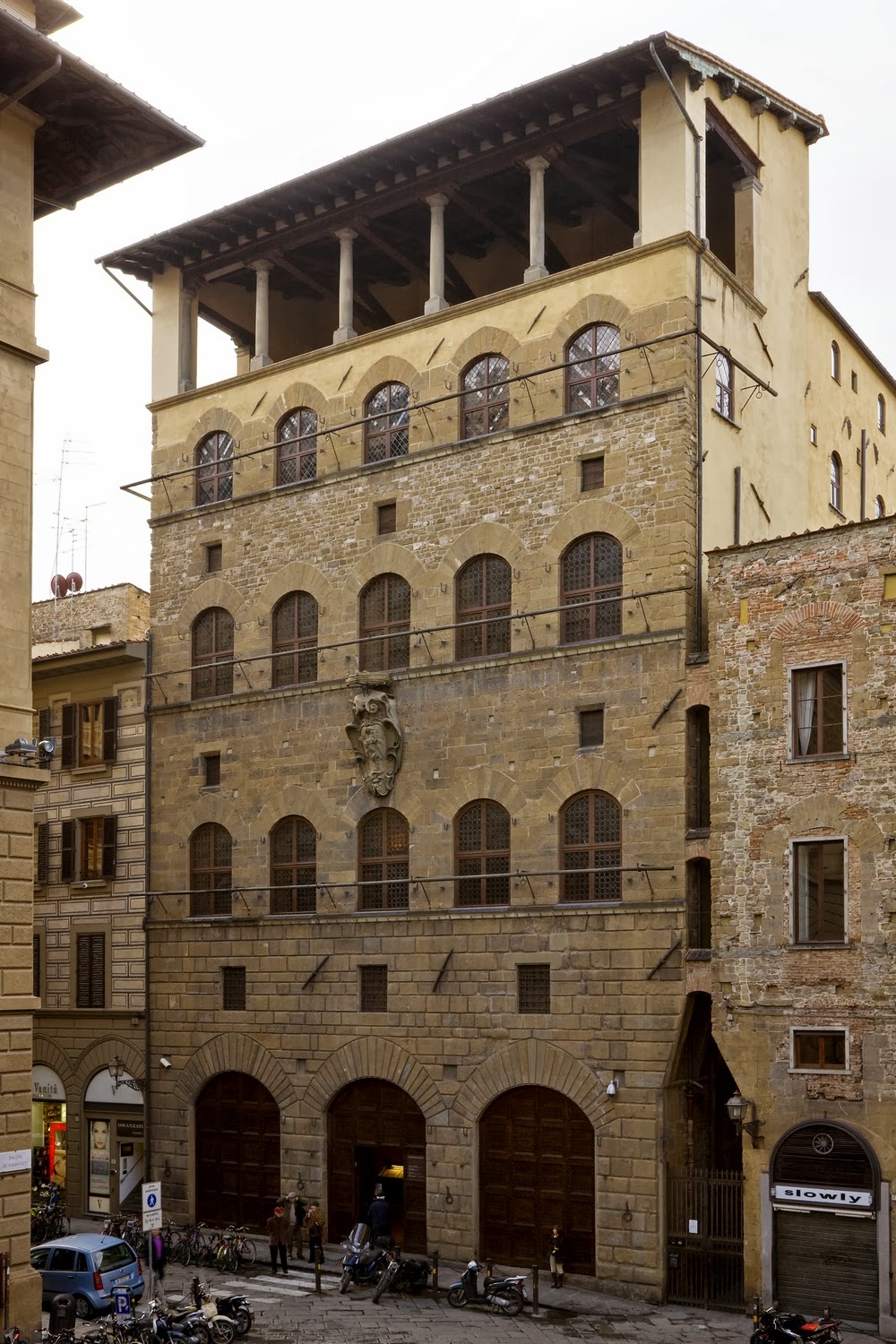 Florence endured a period of strife of Biblical proportions during the 14th century, which included famine, flood, bank failure and plague. Understandably, few buildings were constructed during these years. By the opening of the 15th century, however, Florence was poised for an economic revival and a new spirit of urban renewal was in the air. During this golden age of Florence, building projects were patronized by powerful merchants such as the Medici, Rucellai and Tornabuoni, who wanted to establish and emphasize their wealth and influence through a new type of dwelling: the Renaissance palace.

Walk to piazza degli Strozzi and find the Florentine Renaissance palace par excellence, Palazzo Strozzi, begun by Giuliano da Sangallo in 1489. By the time the descendants of Palla Strozzi returned from exile in Naples, Filippo Strozzi had amassed a huge fortune and was ready to spend lavishly in his hometown. The Strozzi made peace with the Medici and Filippo’s palace proclaimed the family’s triumphant return to Florentine life. The plans for the palace called for a structure of unprecedented scale, even though Filippo pretended that all he wanted was a simple, useful house devoid of pomp, suitable only for himself and his family. He cleverly involved armchair architect Lorenzo il Magnifico as advisor for his project and, with Lorenzo’s blessing, Palazzo Strozzi became the grandest palace built in the 15th century. Broadly modeled on Michelozzo’s design for the Palazzo Medici, the massive palace has grand entrances on three sides and is completely clad in pietra forte, which decreases in size and projection on each story. Take note of the elegant arched windows decorated with rosettes and interlocking crescent moons, a symbol of the Strozzi. 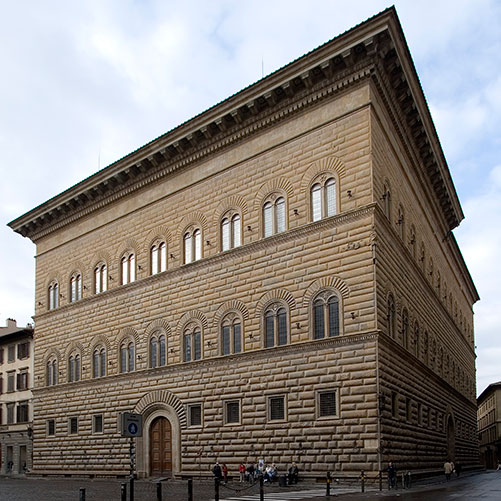 Stroll to nearby piazza Santa Trinita and find Palazzo Bartolini-Salimbeni. Designed by Baccio d’Agnolo in 1520, it was the first palace in Florence created entirely in the High Renaissance manner. The façade caused a sensation as it brought the Roman architectural style of Raphael and Bramante to Florence. Public opinion held it was more suitable for a church than a private palace. The building is three stories tall and crowned with a massive cornice decorated with dentils. The architect playfully alternated the shape of the pediments over the doors and windows from triangular to oval with each rising floor. The subtle variation makes the façade interesting and surprisingly new for Florentine palace architecture. The design was therefore criticized because it seemed too “foreign” and did not fit into the taste or “look” of the city. The criticism provoked the architect to add above the portal the Latin phrase Carpere Promptius Quam Imitari (it’s easier to criticize than imitate).

Look closely and notice inscribed across every window the arrogant family motto Per Non Dormire (so as not to sleep). The inscription refers to the family lore that, in negotiations for a business deal, Giovanni Bartolini laced his business competitors’ wine with opium, and while they fell asleep in their cups, Bartolini signed the contracts. Proud of their trick, the Bartolini have poppies crop up all over their palaces as well as across the windows. 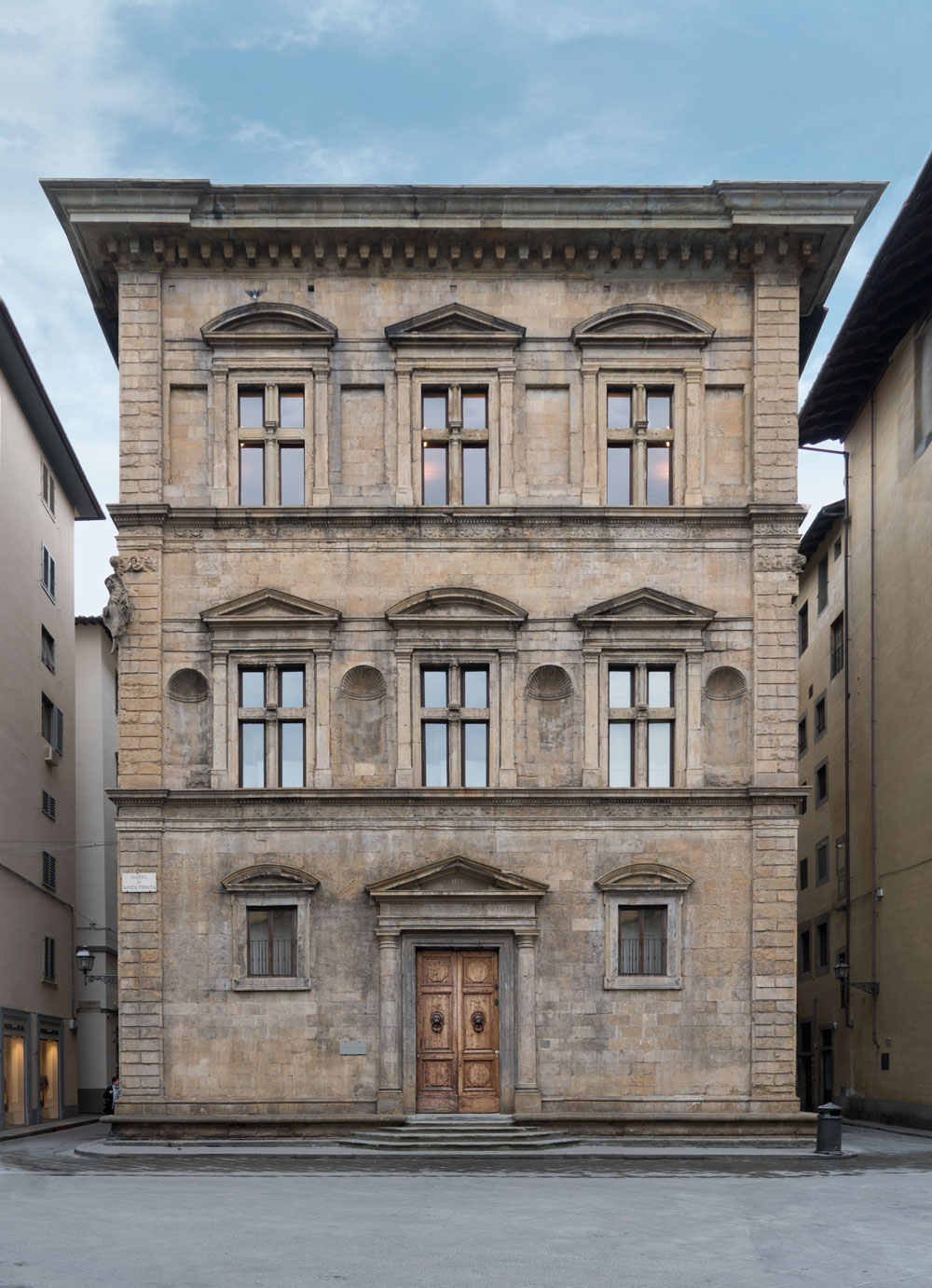 The short stroll from piazza dei Davanzati to piazza Santa Trinita reveals Florence emerging out of the Middle Ages to become the economic and cultural center of the Renaissance: 500 years of history in 500 meters. 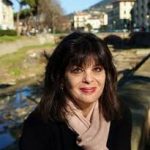 Elaine Ruffolo is an art historian offering in-depth, specialized tours and programs in Florence and other parts of Italy. www.elaineruffolo.com