Looking for ways to pass the time before the gradual ending of the lockdown, I pulled down from the shelf one of the volumes of my old stamp collection, which I had begun as a child. Suddenly, I was watching history unfold before me on the pages: kings and queens who had died, countries that are now called by new names, and amazing adventures or discoveries that were celebrated. But I also found that I had few Italian stamps and did not know much about them, so I decided it was time to do something about it. One of my first discoveries was that, in December 2014, the Turin auction house Bolaffi sold a Tuscan tre (three) lire postage stamp for 114,000 euro. The rarity of this Italian stamp makes it the most valuable Italian one of its kind on the philatelic market; a mere handful of new examples still exist and only two stamped letters. Furthermore, the history of this particular stamp is fascinating.

Private letter and parcel deliveries in Tuscany date to the Renaissance. This system lasted until 1704, when the last Medici Grand Duke, Gian Gastone, put the postal service under his administration, regulating all aspects of it. Before the introduction of postage stamps in 1851, letters were sent with postage to be paid on delivery. Postal markings, at the beginning handwritten and then stamped, were added to the envelope and, in 1839, the date on which the letter was posted was added to the markings.

Tuscany’s first adhesive postage stamps were issued in April 1851 by the Habsburg-Lorraine Grand Duke Leopold II. The stamps depicted a crowned lion of Etruria resting a paw on a shield featuring the fleur-de-lis. This image is of Donatello’s sculpture of the lion, called the Marzocco, originally commissioned for Pope Martin V, but moved to the piazza della Signoria in 1812 as a symbol of Florentine liberties. These stamps were initially printed on lightly coloured blue or grey paper at the grand ducal printing office in Florence, but, between 1857 and 1859, this changed to white watermarked paper and the words “II E RR POSTE TOSCANE” were added, in recognition of the ruling dynasty. 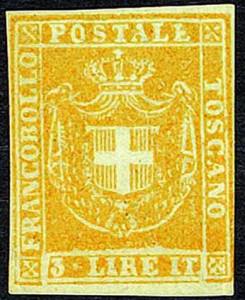 At the end of April 1859, on the eve of the Second War of Independence in Italy between France and Piedmont-Sardinia against Austria, Grand Duke Leopoldo II was toppled in a bloodless coup and left Florence. King Victor Emmanuel II of Sardinia’s troops occupied Tuscany throughout the conflict. A provision of the preliminary Villafranca peace agreement signed between Napoleon III of France and Franz Joseph of Austria in July that year allowed the Hapsburg-Lorraine rulers to return to Florence. However, because Leopold was too unpopular to be welcomed back, he abdicated  in favour of his son, Ferdinand IV. Despite this, the pro-Savoy provisional government in control of the city considered Ferdinand just as unacceptable and so he was never enthroned in his father’s place. After a plebiscite, the Kingdom of Sardinia annexed Tuscany on March 22, 1860.

During this period of transition, ordinary life needed to carry on, which meant that the provisional government in Tuscany continued to allow the postage stamps of the exiled royal house to be used, unlike in other annexed provinces in central Italy. It simply featured a seal bearing the arms of the House of Savoy stamped on top of the Marzocco until new stamps could be designed and printed. This occurred on January 1, 1860 when the provisional government launched a new series of stamps with the face value of 1, 5, 10 (most commonly used for letters sent within Tuscany), 20, 40 and 80 cents, and the star and only true rarity of the series today, the yellow ochre Tuscan three lire stamp.

Rectangular in shape, 23 millimetres high and 19 wide, the series was designed by the Florentine mint with the frame around the stamps reading “Tuscan postage stamp”, whilst the Savoy coat of arms on an ermine mantel replaced the Marzocco in the middle. For the first time, the band on the bottom indicated that the value of the stamp was in the country’s new currency, the Italian lire (and not the old Tuscan lire) with the initials “IT” next to it, clearly celebrating Italy’s unification. The series was printed in sheets of 240, divided into three squares of 80 stamps each, but, because of the high price of the Tuscan tre lire stamp, very few were printed or used. The Postal Superintendence established that the series would be valid until December 31, 1861, but examples, although scarce, remained in use for all of 1862 and the early part of 1863.

The Tuscan tre lire stamp has attracted collectors from all over the world, including the banker Alphonse Rothschild, and Farouk I, the king of Egypt. However, the opportunity of making a profit by selling these stamps has also attracted forgers. One of the most famous was Giovanni (Jean) Sperati, who was born in Pistoia in 1884. A stamp collector from childhood, he is reputed to have begun his stamp counterfeiting career after he was duped into buying a fake Tuscan tre lire stamp for 100,000 francs in 1920. With a fine eye for detail, Sperati thought of himself as an artist and he is said to have created 5,000 high-quality forgeries of stamps issued by over 100 postal departments. Sperati even wrote a book entitled Livre d’Or, in which he boasted about his achievements and how his handy work had fooled many illustrious experts. Today, his forgeries are sought after and valuable within the philatelic world.

The Historical Museum of the Post and Telecommunications in Rome was opened in 1982 and is arranged into 22 sections, beginning from ancient times to the modern age, with relics, photographs and watercolours that witness the evolution of the postal service and radio- and telecommunications in Italy. You will see the stamps, postmarks and seals from the pre-unification States to the Republic. The museum is situated in viale Europa 190 in Rome.