Locals have called it “la Passeggiata”, or the promenade, since 1902 when it was inaugurated in Viareggio, the seaside town called the “pearl of Versilia” in the province of Lucca. This three-kilometre-long esplanade offers visitors a unique architectural display of decorative Art Nouveau as well as more symmetrical Art Deco villas, historic cafes, bathing establishments, hotels and shops.

Viareggio has medieval origins and the oldest part of its fortifications, the Matilde Tower, which was built by the peoples of Lucca and Genoa to protect themselves against domination by Pisa, dates back to 1172. In June 1820, the town was granted the rank of a “city” by Maria Luisa of Spain, Duchess of Lucca. By the mid 1800s, swimming in the sea became trendy and Viareggio began to develop rapidly not only as a beach resort and stamping ground for the aristocracy and wealthy merchants from Florence and Lucca, but also for an increasing number of tourists attracted to the town by the descriptions of its attractions in the major guidebooks of the day. During this time, the Balena Baths were constructed in wood at viale Regina Margherita, number 42, and named after the family who owned them. They boasted an exotic rotunda on stilts in the sea at the end of a jetty shaped like a Chinese umbrella and a dance hall. These were the first baths open both to men and women; previously the bagni had been strictly unisex.

In the 1920s, a special commission was established to redevelop the seafront, ridding it of the few wooden buildings that had not been destroyed by a great fire in 1917 and replacing them with more permanent constructions that met the new standards for health and safety. In 1928, the new masonry baths with a monumental entrance were designed by Alfredo Belluomini (1892-1964), a member of the commission. Born in Viareggio, Belluomini took a degree in civil engineering at Milan’s Politecnico in 1918, followed by a diploma in architecture from the Accademia of Brera. Belluomini was behind some of the city’s most eclectic and modern Art Deco architectural experimentation of his era. 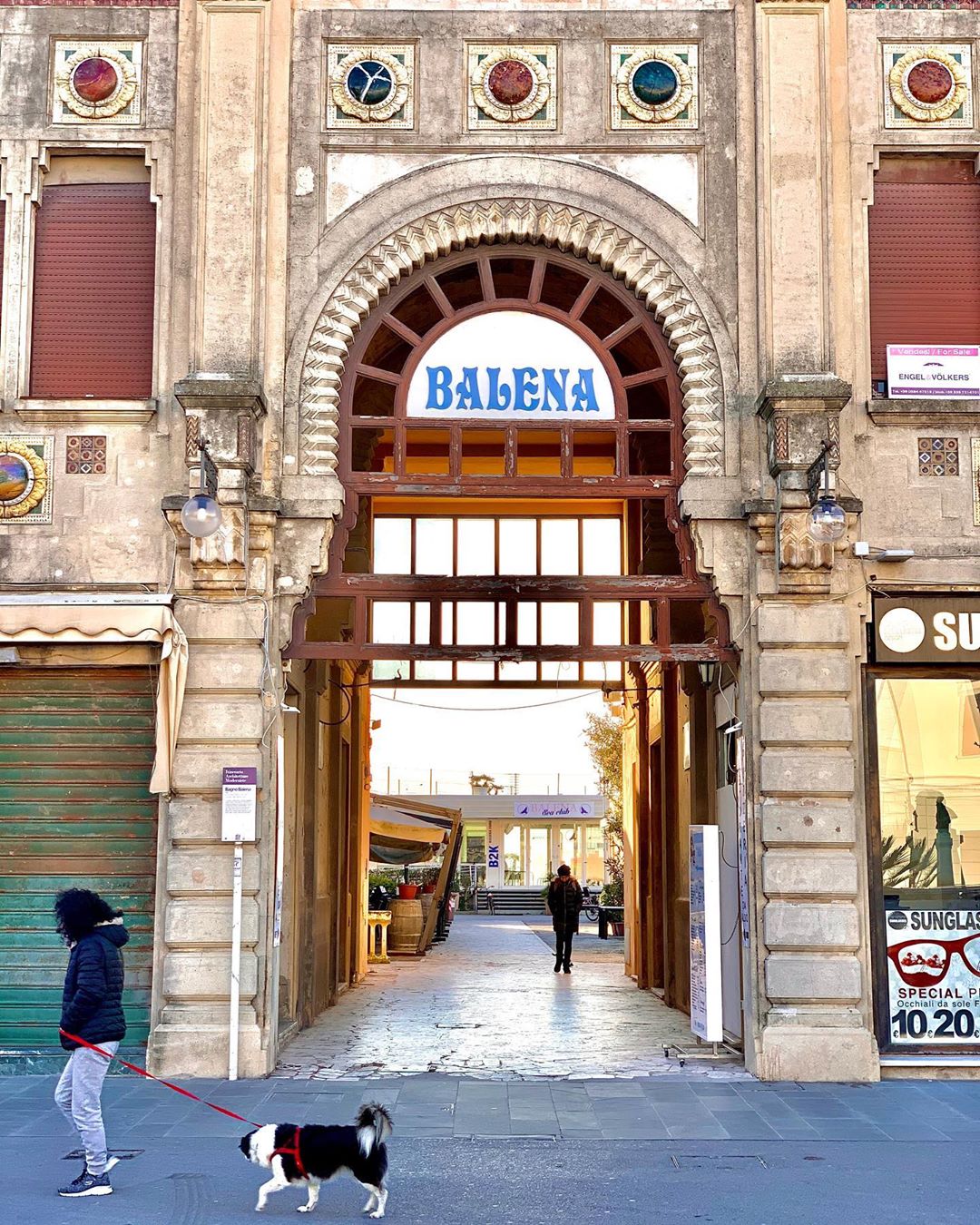 The Balena Baths consists of two floors and are U-shaped, with the main entrance dividing the other two buildings on the beach side. There are shops and a restaurant downstairs and apartments upstairs. The name of the baths is written in large letters and represented by a whale in a round stained glass window. There are two ceramic tondos that look like marble above the architraves of the two upstairs windows and three above the entrance, as well as other geometric and floral ceramic decorations on the facade. Today, once through the entrance, there are two large swimming pools, changing cabins, with socially distanced umbrellas and deckchairs facing the sparkling Tyrrhenian sea.

It was the Florentine painter, decorator and ceramist Galileo Chini (1873-1956) who decorated Belluomini’s building. He knew Belluomini because he was a member of the same commission and had collaborated with him on other projects in Viareggio, including the Grand Hotel Excelsior and the Gran Caffè Margherita. Chini studied at the Scuola d’Arte of Santa Croce and at the Scuola Libera del Nudo at the Accademia di Belle Arti in his hometown. In 1896, he was one of the founders of the “Arte della Ceramica” in Florence, which produced quality majolica. Chini participated in many national and international world fairs. In 1906, he and his cousin opened the “Fornaci di San Lorenzo”, where they manufactured elegant ceramics, glass windows, furniture and furnishings decorated with ceramics or glass. Between 1911 and 1914, he spent time in Thailand, where he decorated the king’s throne room and painted portraits of members of the royal family. In 1927, he became Professor of Pictorial Decoration at the Royal School of Architecture in Florence and undertook, over the years, many public and private commissions.

Many believe that the rotunda referred to in the Italian song “Una rotonda sul mare” made popular by the singer Fred Bongusto in 1960s was the original one at the Balena Baths. One of the song’s authors, 91-year-old Pietro Faleni, revealed in a recent interview in the Massa-Carrara edition of La Nazione newspaper that this was not so. He did, however, admit that his life changed “when Fred, that night in the summer of 1964, sang it for the first time at the Balena Baths in Viareggio”. Instead, in the same article, another of the song’s authors, Franco Migliacci, also famous for writing, with Domenico Modugno, the lyrics of “Nel blu, dipinto di blu”, confessed that the rotunda he had in mind was not by the sea, but in Passignano on Lake Trasimeno, where he used to holiday with his family as a boy.

The Chini Museum at Villa Pecori Giraldi in Borgo San Lorenzo houses a permanent collection dedicated to the history and the ceramic works and masterpieces of the Fornaci San Lorenzo of Galileo Chini and his family. For further information, see www.chinimuseo.it.