Finding Machiavelli in Sant’Andrea in Percussina

In Florence, city of pilgrimages, it can be hard to find Niccolò Machiavelli.

The house in via de’ Guicciardini, where he lived from his birth in 1469 to his death in 1527 was destroyed by German mines in 1944. Two beams were found in the rubble and incorporated into the modern rebuild along with a solemn plaque. At the Palazzo Vecchio you can see the office where he worked for the reforming republican government of Pier Soderini from 1498 until the Medici restoration of 1512. This long narrow room holds his portrait and a bust, both posthumous. Le Stinche prison, where he was detained in 1513 on a false charge of conspiracy, no longer stands; his old haunts around the Mercato Vecchio have been knocked down and paved over. His tomb at Santa Croce was built in 1787, a sign of his reappropriation in Enlightenment thought. He joined the pantheon of greats 260 years after he died, sad and in pain, denied a post by the re-restored republican government that was suspicious of his attempts, in the intervening years, to enter into dialogue with Medici rule. 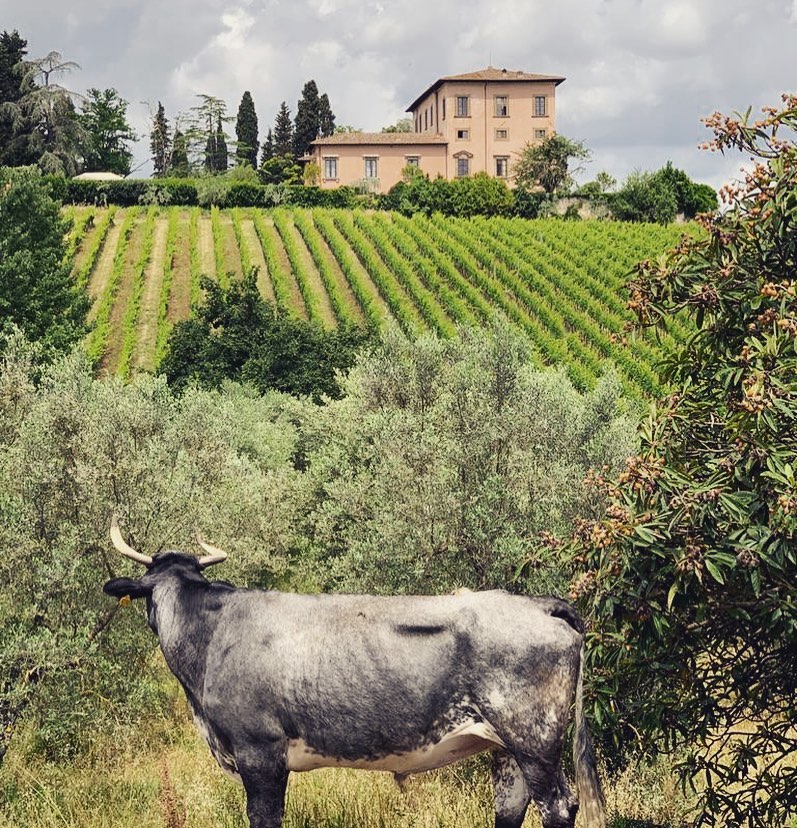 Machiavelli loved Florence, and Florence loves him. All these memorials are the city’s acknowledgement that he had much more to say than his time allowed. But his official presence is as smoothed out and reconstituted as his robust pale statue in the Uffizi colonnade. If you want to find the Machiavelli of the letters, plays and poems—funny, amorous, always conflicted and rarely content—you have to leave town.

Take the 368A bus (if you don’t have a car) from Santa Maria Novella, or hop on it further south along the via Senese. This brings you to the village of Sant’Andrea in Percussina, the heart of the historic Machiavelli estate where Niccolò—and here he is always Niccolò—spent two years in exile following his release from prison. Get off the bus and look back towards Florence. On a clear day, you can see the Duomo.

That sight was torture for Niccolò. The countryside meant everything he most disliked: manual labour, plain living and silence. But he had no choice. A severe fine had swallowed much of his already modest assets, and he had a family to keep. He took on all the duties of a gentleman farmer, though he still let off steam with drink and gambling at the coaching inn, the Albergaccio, across from his house. He read poetry and fretted for his lovers; he wrote letters asking for help that never came. And he worked on The Prince, which he hoped would persuade, or perhaps shock his new masters into giving him a role worthy of his abilities and insight. (It didn’t.)

The misery and inspiration of those Sant’Andrea years are vividly preserved in Machiavelli’s writings. The place itself has changed. The estate passed along the Machiavelli line until that died out, and then to the Serristori, their direct heirs. Now it belongs to a hospitality business: the Saraceni Group, run by Libero Saraceni and his two sons, Lorenzo and Matteo, who developed the group’s wine division. The farmland has been turned into vineyards and olive groves; the disreputable coaching inn is now a top-class restaurant, and the house itself is a museum. 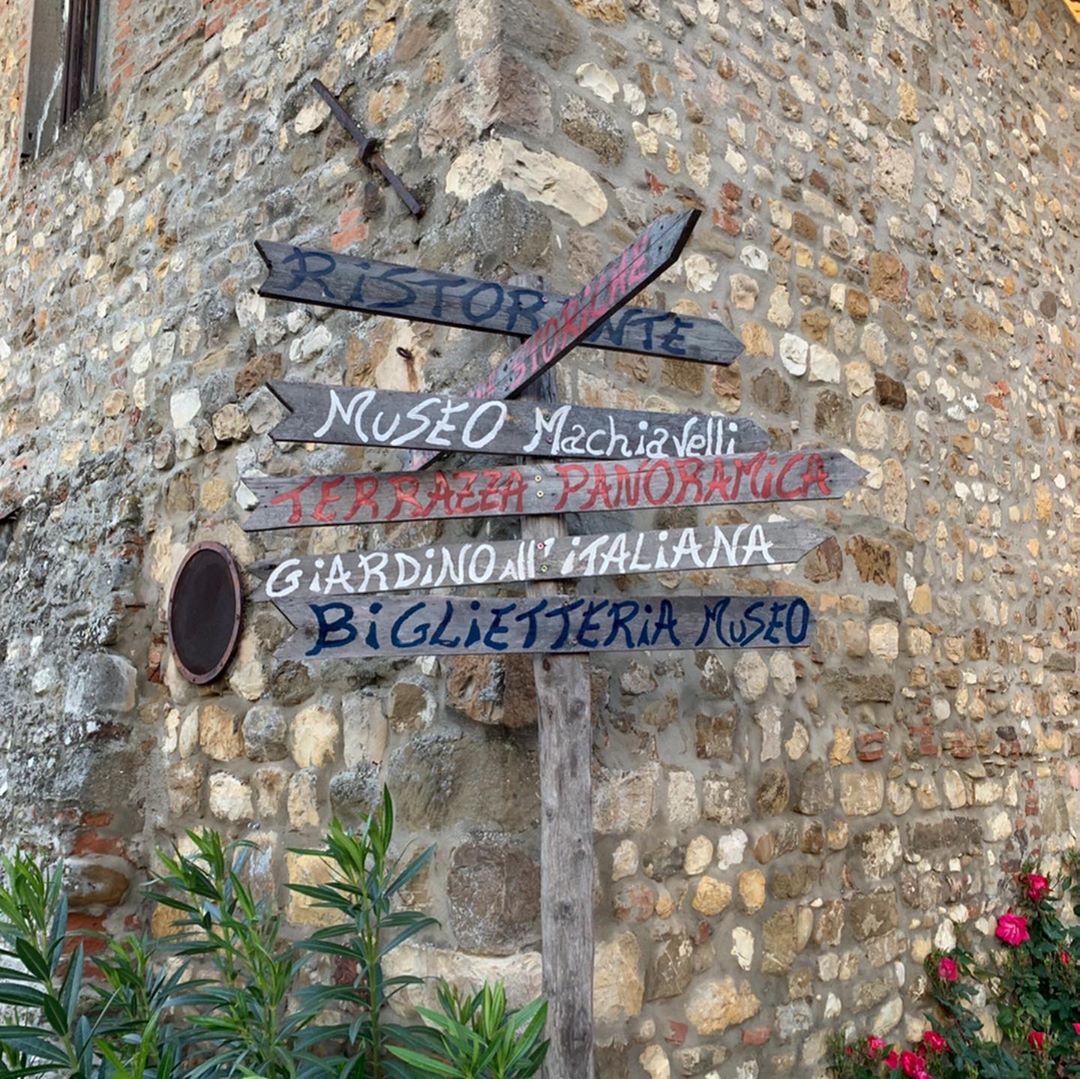 House-museums too often have a deadening reverence about them. That is what I expected when I arrived at Sant’Andrea for the first time on an extended stay at La Fonte del Machiavelli in the spring of 2019. What I found was something infinitely more alive and wonderful. The study, where Machiavelli shut himself away from the demands of farm and family, was then—as it must have been in his time—an island of quiet in a sea of activity. Guests came for lunch, for dinner, for wine tastings and cooking classes; musicians played for parties that spilled out from the farm buildings onto the terrace overlooking the valley. The staff of the Albergaccio hurried between house and inn through the secret tunnel Machiavelli himself liked to use. And the man was everywhere: his image on the walls, on the billboards, on the labels of wine bottles. People talked of him like a friend, a beloved resident ghost.

In the year or so since I first visited Sant’Andrea in Percussina, I have gone from visitor to regular. The business has further evolved under the direction of Matteo Saraceni, whose vision for the “borgo Machiavelli” is comprehensive and dynamic. But the atmosphere of the place, the affectionate respect for Niccolò’s ghost, remains constant, and so does the welcome.

The requirements of Phase 2/3 have put paid to weddings and parties and cookery classes for now. But the village, which has survived war, plague and upheaval, is ideally suited to adapt to these new demands. The rooms and spaces of the inn, the capacious historic kitchens and the surrounding vineyards, gardens and terraces have all been put to use so that visitors can eat, drink and soak up the view without sacrificing safety or comfort. In difficult times, Machiavelli’s hell is a small paradise. 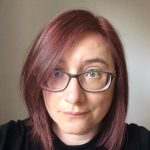 Kirsty Jane Falconer is a writer and translator living in Poggibonsi. Her work has appeared in The Tablet, Times Literary Supplement and The Honest Ulsterman. She is writing a novel about Machiavelli’s time in exile, incorporating creative adaptations of his poetry and letters.