“Eh bien, mon prince, Gênes et Lucques ne sont plus que des apanges, des estates, de la famille Buonaparte.” It’s not so shocking that the very first sentence of War and Peace should be in French: an awful lot of the novel is. The real surprise is that it should mention not Moscow or St. Petersburg, but two places far away. Yet this is how the long, long novel begins, with news that Genoa (Gênes) and Lucca (Lucques) have become the property, the private “estates” of the Bonaparte family.

So says Tolstoy’s Anna Pavlovna in July 1805, which was indeed a significant month for Lucca. The city had a long and proud history of independence, and when 1805 started it was virtually the only part of Tuscany that lay outside the Spanish-ruled Kingdom of Etruria. But Lucca knew that it could not resist the newly crowned “King of Italy”, and Napoleon treated it as he treated so many of his conquests, by putting them in the hands of his nearest and dearest. A sham plebiscite was held from June 5 to 7, and on July 14 the city opened its gates to its new sovereigns, the Prince and Princess of Piombino: Felice Baciocchi, a Corsican general in the French army, and his wife Elisa, Napoleon’s eldest sister.

Napoleon did not rate his countryman Baciocchi’s leadership abilities, and from the first it was clear that Elisa was to take the reins, while her husband had to make do with the title of Prince Consort. Elisa made immediate use of her power to ruffle feathers: no sooner had she been received at the Accademia degli Oscuri, the local ivory tower, than she announced that it was disbanded. It was reformed as the Accademia Napoleone, in a way that would be more serviceable to the state. 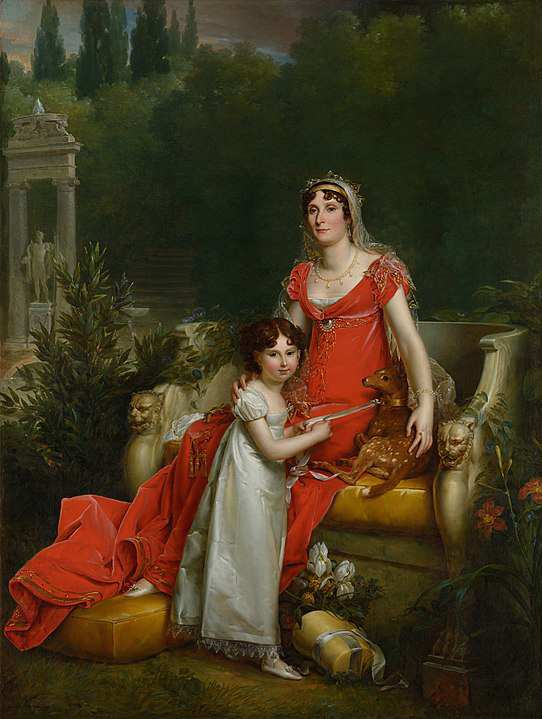 Portrait with her daughter Elisa by François Gérard, 1811

But Elisa was less totalitarian dictator than enlightened despot. In April 1806, she embarked on a dissolution of the monasteries, with the important exception of those religious houses that also functioned as schools. The monks and nuns were pensioned off, though at a pittance, and Elisa turned her efforts towards social schemes that no one could argue with. Smallpox vaccination was made compulsory, while some of the suppressed convents and cloisters were turned into hospitals for the sick or hospices for the homeless. The unemployed were given work on public projects, and even soup kitchens sprang up around the city. Prisons were reformed too, as Elisa and Felice drafted a new penal code, which among other things stipulated that those awaiting trial were not to be remanded in custody with convicted offenders.

She relentlessly pushed the cause of state education. The Collegio Felice provided a primary and secondary schooling in grammar, the sciences, fine arts and foreign languages, a curriculum that attracted pupils from across Italy and even Europe. Benefits were felt outside the city walls too, as elementary education was brought to every Lucchese municipality, with teachers living in-house. Elisa encouraged studiousness among her young subjects by offering travel grants for study abroad programs. No wonder that historian David Gilmour called Lucca “the happiest place in napoleonic Italy”.

It was happier still when Elisa persuaded Napoleon to exempt Lucca’s men from conscription, a privilege unique in the First French Empire. In 1807, that empire found itself in possession of all of Tuscany, when Spain ceded the kingdom of Etruria and left its queen, the Spanish infanta Maria Luisa, to see herself out. The region was put under a governor for a couple of years, but that came to nought; and in 1809, Elisa moved into Palazzo Pitti. Princess of Piombino, Duchess of Lucca, she was now Grand Duchess of Tuscany.

Elisa set about transforming her house and garden into the tourist attractions that we know today. Artists flocked to Florence as they had not done since the days of the Medici, and naturally she sat for them: a few of her portraits are on display in Palazzo Pitti. She appointed none other than Niccolò Paganini as her court violinist and reputedly her lover, which did not stop Felice, a devoted fiddler himself, from taking lessons.

But Florence took its toll on Elisa. “She was never queen there,” wrote her biographer Eugenio Lazzareschi, “in the way that she was queen of her Lucca.” Napoleon demanded tribute from the former kingdom of Etruria, money that he sorely needed when his war effort ran aground in Russia. He also needed men, and Elisa could not save her new subjects from being press-ganged into French uniform. In Lucca she had been a force for social reform in a semi-independent state (or estate, to use Tolstoy’s word); in Florence she was just another Bonaparte, heading a dazzling, decadent court.

And it was a decadence that Tuscany could ill afford. As a French dominion, it lost all trade with Napoleon’s enemies. By late 1813, the Austrians were outside Bologna, Napoleon’s brother-in-law Joachim Murat, King of Naples, had thrown in his lot with the Allies and was marching north. A few months later, the English commander Lord William Bentinck landed his troops at Livorno, and Elisa saw that the game was up. She fled Lucca on March 14, heavily pregnant, having already abandoned Florence. She was captured and allowed to retire to Trieste, where she funded archaeological excavations until she died in 1820, at the age of 43. She was the only one of Napoleon’s siblings not to outlive him.