“Modern Renaissance” are words that are used widely recently, but here we have its finest example. 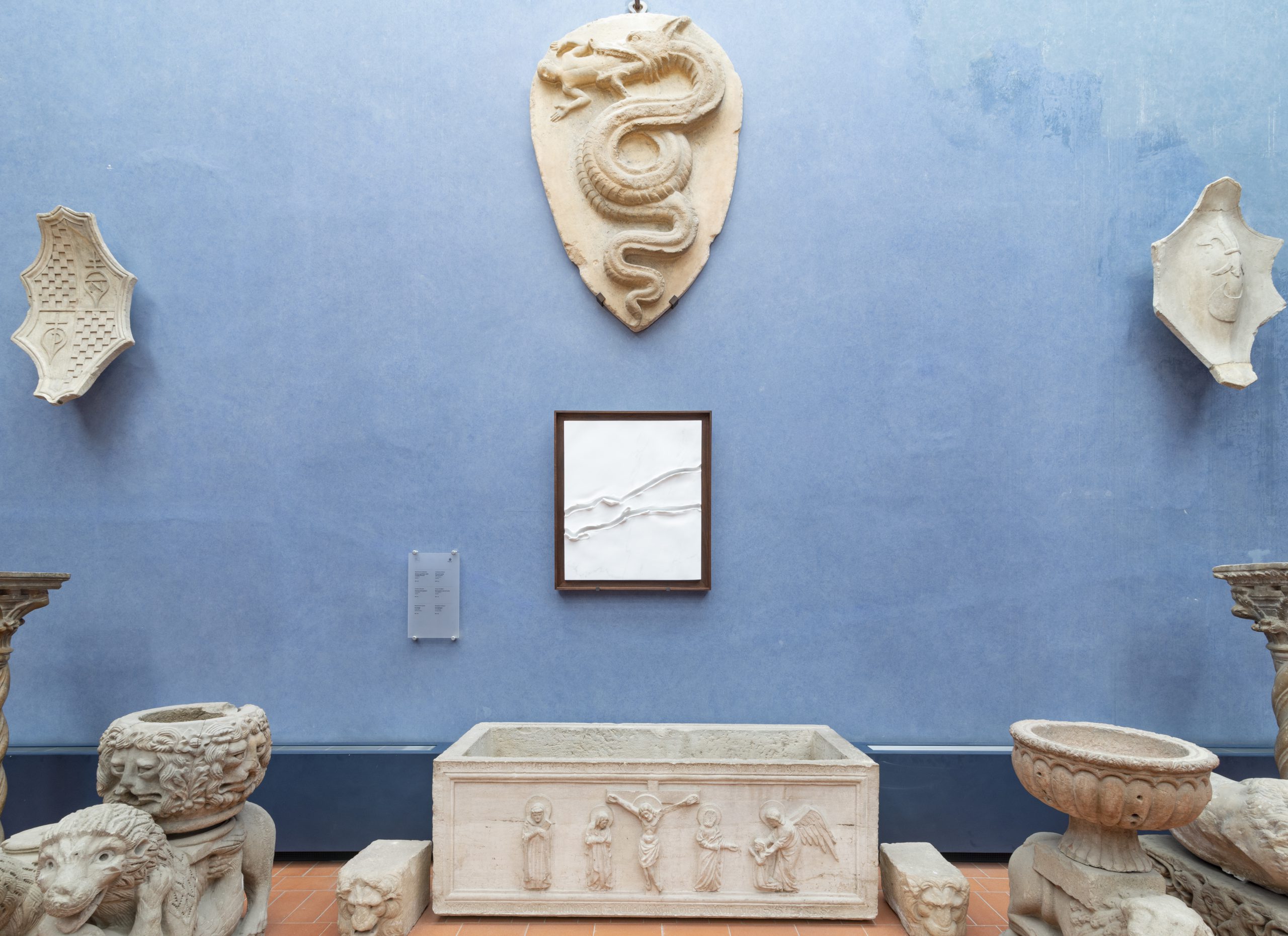 Northern Irish artist Kevin Francis Gray is one of the most talked about creators of contemporary sculpture. With a studio in Pietrasanta and an attachment to Tuscany, the artist is exhibiting for the first time in Florence at the Stefano Bardini Museum, on display until December 21. Viewers can expect a wave of emotions, flowing with the free forms of the works themselves. Released from the confines of the 17th-century classical tradition, the art bears an emotional impact that delves deep into the darker elements of the human psyche. Taking tradition and making it new is Gray’s manifesto, and here we see a brave and exciting body of work curated by Antonella Nesi, with Mus.e, Eduardo Secci Contemporary and Moaconcept supporting the exhibition’s realization.

Kevin Francis Gray began life in a politically unstable environment. Armagh in Northern Ireland during the late 1970s and 80s was a war zone and I was curious about what impact this had on his art.

“In the period that I was growing up as a young man in South Armagh, the tensions were so familiar that they were the language of our everyday, so much so that you didn’t really consider it until you had time to mature and move away from it. I feel that it has had a profound impact, both positively and negatively; not only on how I make work, but also on me as a human being. Particularly with my work—it has always dealt with subjects that might be a little more difficult, a little more complicated. I’m attracted to a darker investigation into the human psyche and I guess that comes out a lot in my younger work where there seems to be a more literal expression of my anxieties and concerns and worries and fears. Now that I’ve gotten older and more confident, that need to be so visceral has dissipated a bit. The beauty, elegance and sophistication of the work has started to develop. Moments of conflict create a lot of beautiful art, looking, for example, at the many young writers coming out of Iran. The idea of conflict can be a real melting pot for creativity and artistic drive.” 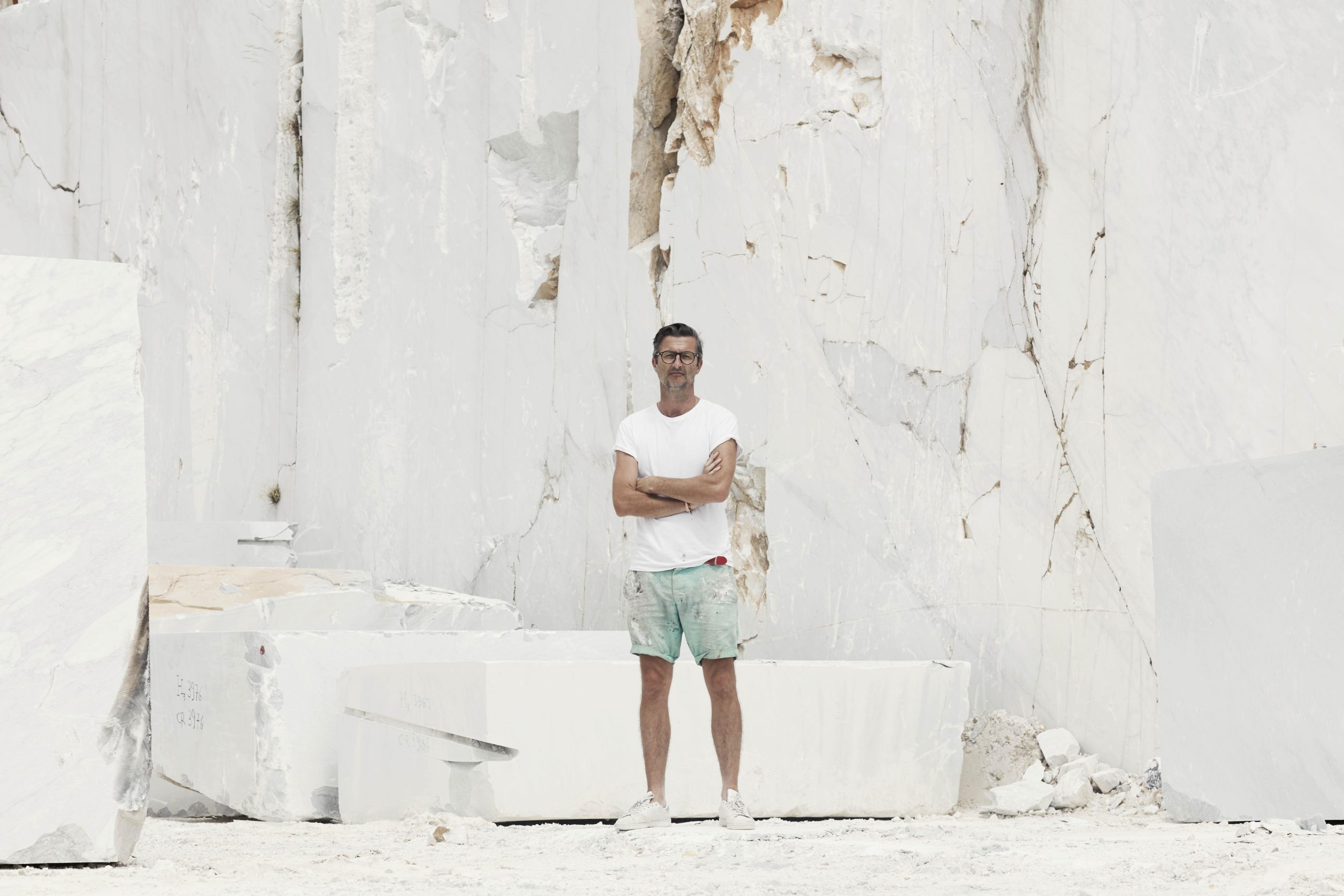 While best known for his sculptures, Gray’s career actually began in painting.

“I always joke that I studied painting for a BA and an MA, and then after graduating I realized I was a terrible painter, so I moved towards sculpture! Painting didn’t satisfy my artistic needs and my works were becoming more and more three-dimensional. I started interjecting things into the canvases and creating more installation-based works. That moved into video and performance, graduating then, to sculpture.” 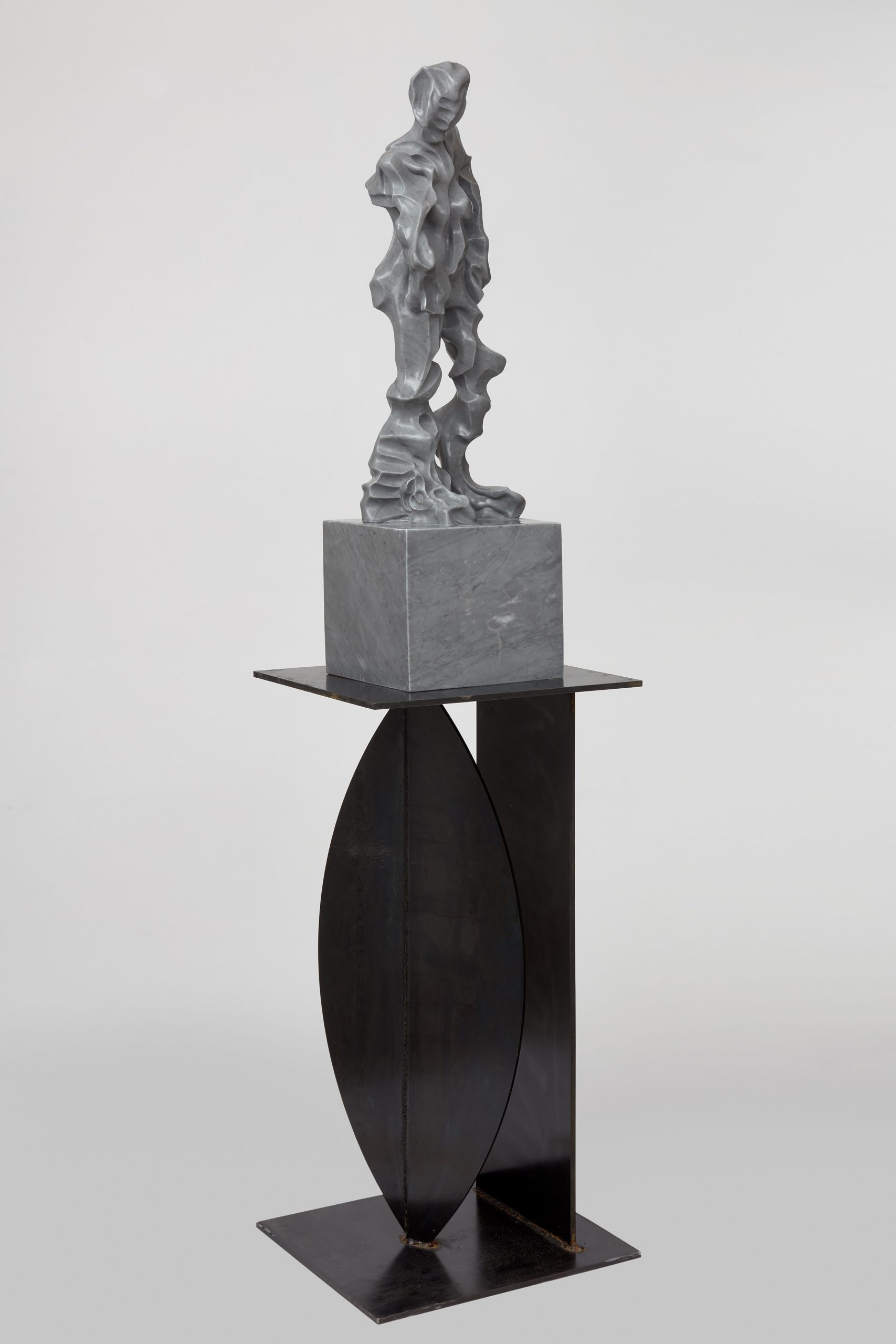 Gray has a studio in Pietrasanta, undoubtedly the perfect place from which to chisel marble, the movements of masters like Michelangelo still palpable.

“I feel privileged to be able to work here, not only because I’m surrounded by the greatest artisans in the world but also because people of that city and region are so receptive to artists coming in, it’s been in their blood for centuries. When I decided to make marble, there was obviously only one place I was going to go in the world to make that happen, and that was going to be Tuscany.” 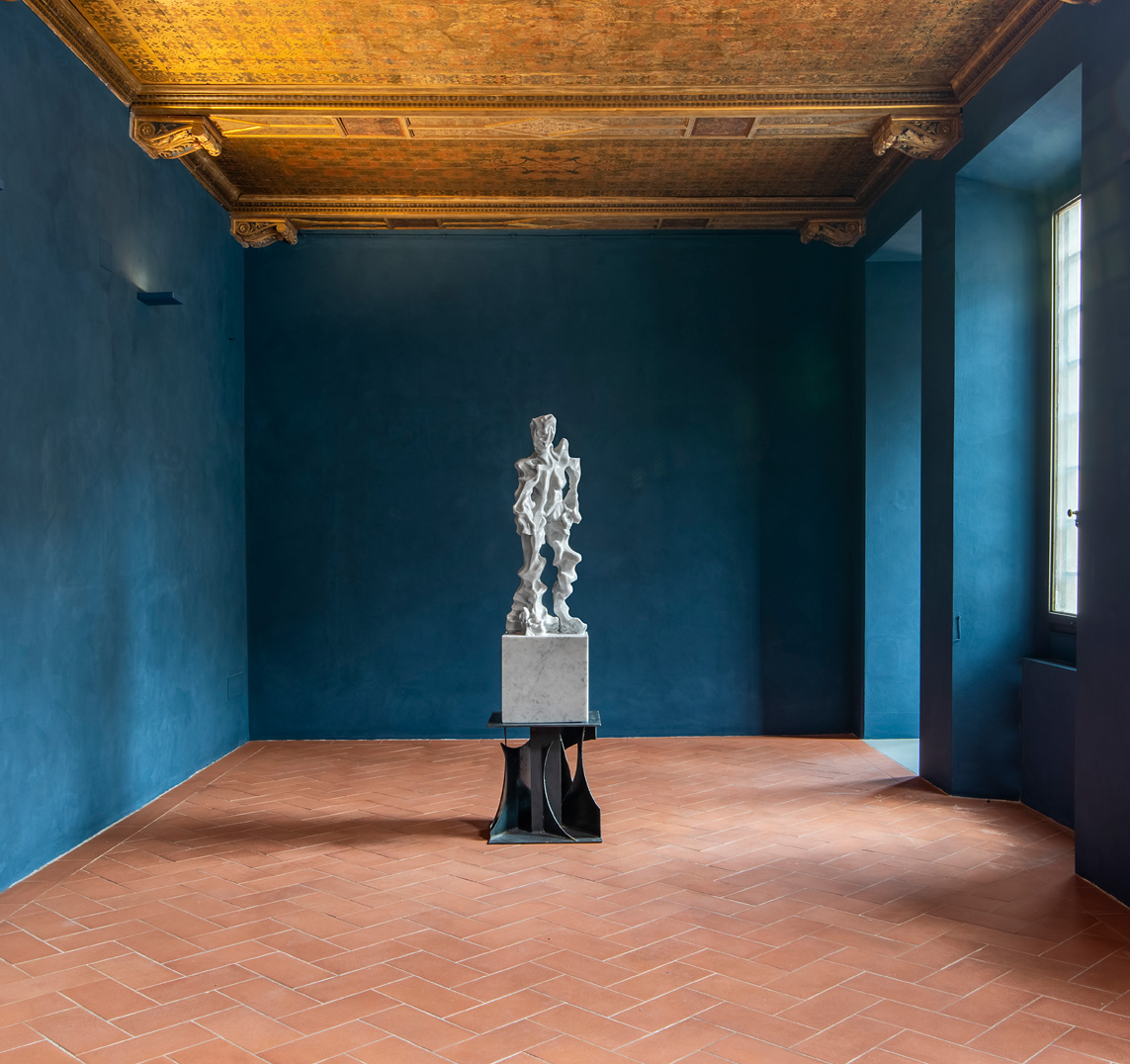 Galleries in London, Paris, New York and Copenhagen hunger for his work, however Florence bears a special significance for the artist.

“Florence really is the city to exhibit in, so it’s very exciting. Of course, I was devastated that it didn’t open when it was meant to because of the virus, but I’m glad to know now that we’re able to push on and to have it open for the summer and into the winter.” 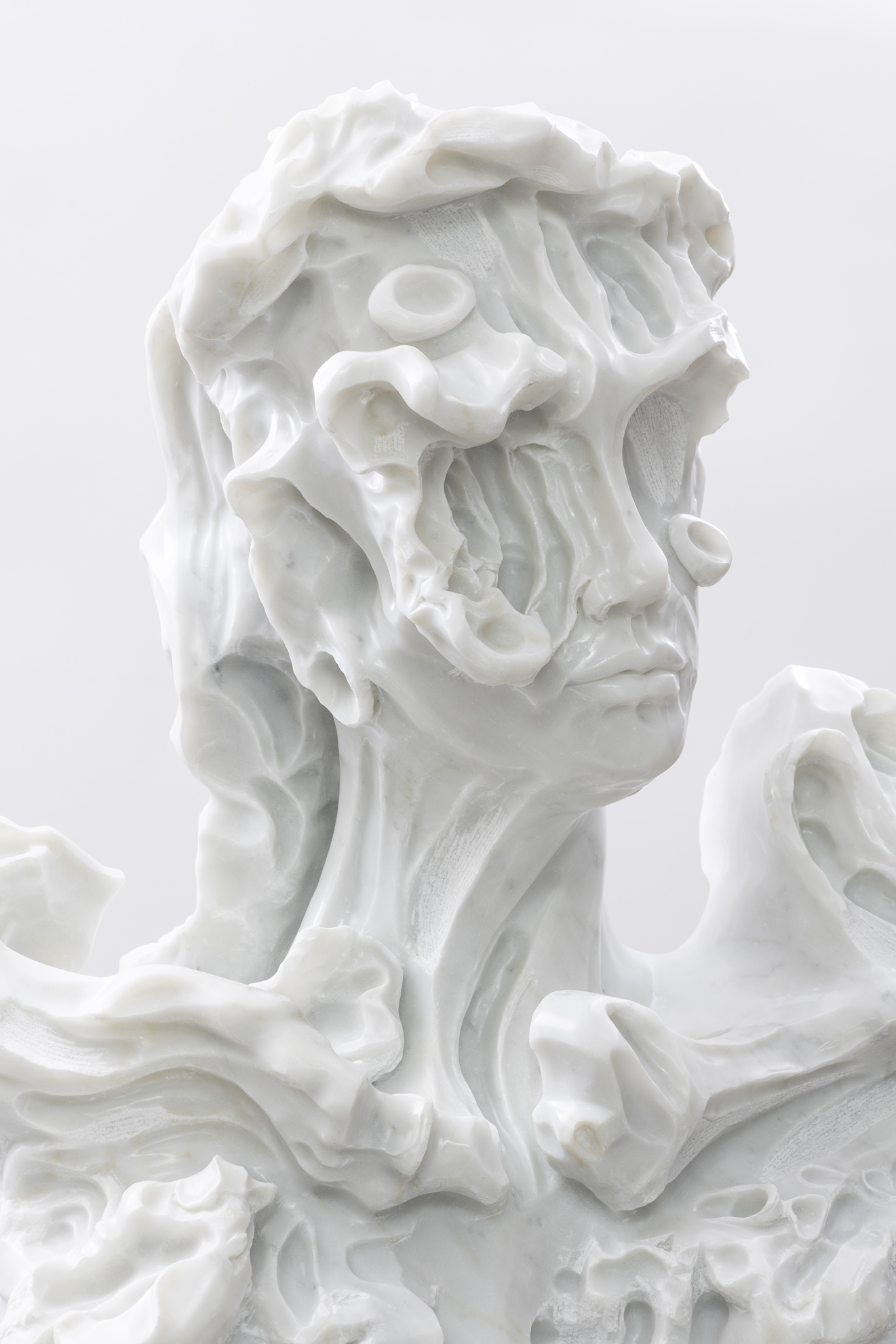 Indeed, museums of Florence are being embraced by locals since the easing of lockdown: “What a great thing, but also in a way, what a great metaphor for the rest of society, saying that we should take this moment to slow down and to let people enjoy what’s close to them. It’s quite profound. Florence is a cornucopia of visual pleasures that I suspect living there and being surrounded by so many tourists that you just avoided them and missed a lot. I, however, can’t wait to get back!”

The date for the vernissage is set for September 12 as a way to “celebrate, in some ways, the end of summer, but also, hopefully, to celebrate the end of this difficult period with the launch of a new exhibition.” Surging forward with creativity and culture, Florence may very well be in the midst of a modern Renaissance.

See more about his work at www.kevinfrancisgray.com.