Traditional Florentine dishes are, for the most part, meals that were consumed and passed on by the working class. Think tripe and lampredotto (cow stomach), ribollita and pappa al pomodoro. There’s nothing fancy about these dishes made with leftovers, stale bread or scraps of meat that people could not afford to get rid of. And yet, when that spoonful of warm bread drenched in tomato sauce meets your taste buds, you’ll wonder how something so simple can be so delicious.

When I think Florentine food, I think Panzanella. Panzanella was common among the farmworkers of centuries past, as it was (and still is) a dish that could be enjoyed cold, required minimal preparation and no cooking, whipped up from stale bread and cheap ingredients like onions and cucumbers. It filled people’s bellies and offered a mix of carbohydrates and vegetables (and fruit, if you belong to the tomato-is-a-fruit team) to get through the long workdays. 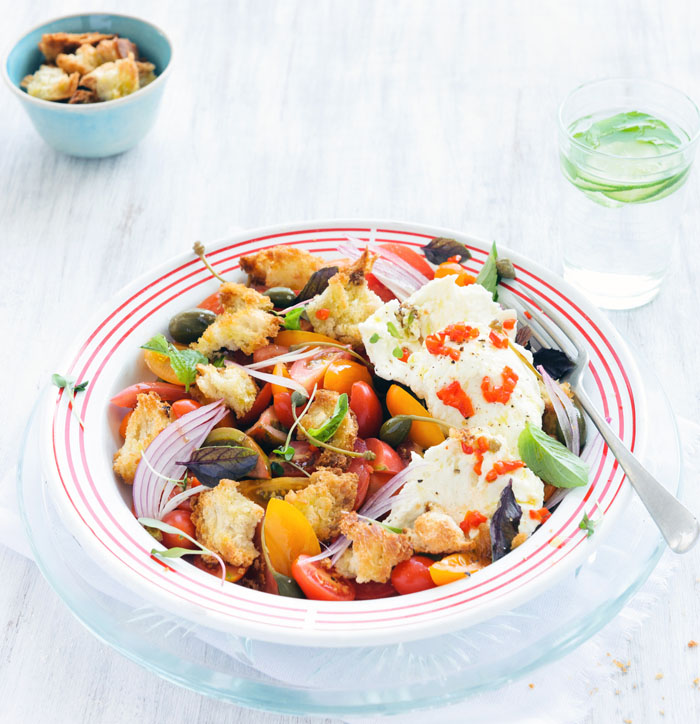 A modern take on Panzanella

Panzanella gets its name from the coming together of two words: pane (bread) and zana or zanella, a Tuscan term that refers to a rustic oval container, in which the dish was traditionally served. One of the first mentions of Panzanella (or, rather, a dish that was very similar to today’s Panzanella) is found in Bronzino’s poem “In lode delle cipolle” (An Ode to Onions), which you can read in its entirety here. The Florentine painter praises the different ways in which you can eat these ruby bulbs (whose gastronomic importance is placed above salt and lard), and reveals that they’re especially delicious with olive oil, vinegar and bread, or chopped up with purslane and cucumbers. Mind you—praise only goes out to red onions. White onions fall under a different (and less prestigious) category in the poem. Though today’s recipe is richer in ingredients, Bronzino’s description certainly sounds like an early mention of Panzanella (minus the tomatoes, which weren’t included in the recipe until a few centuries after Bronzino’s ode).

The great thing about Panzanella is that it’s a dish enjoyed by almost everyone. Vegetarians and vegans: pull up a chair and serve yourselves! Gluten intolerant folks: tweak the recipe a bit by using gluten-free bread. Furthermore, it’s a refreshing recipe for hot summer months when the last thing you want to do is cook something in the oven or over a hot flame, and even most kids will appreciate it.

Once you take your first taste, you’ll immediately realize that Bronzino was right. What could be better than a refreshing plate of Panzanella as a midsummer night’s meal? 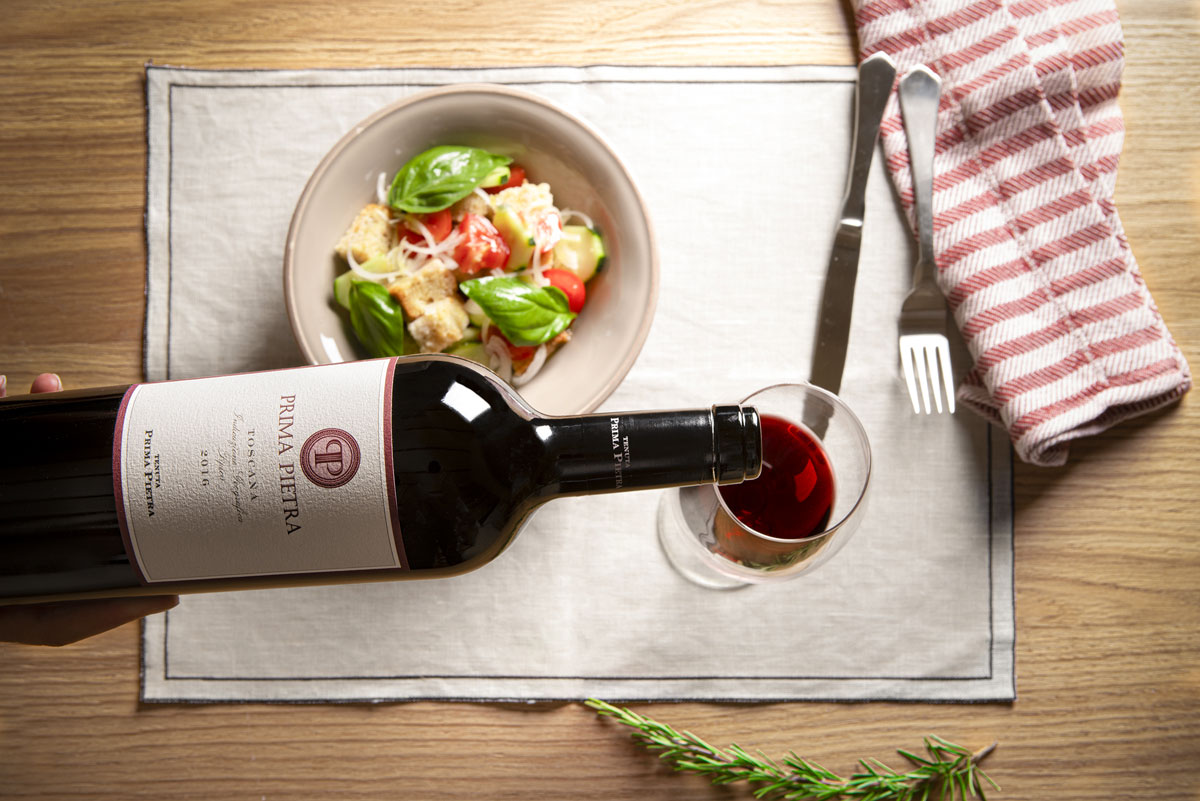 Panzanella with a glass of fine Tuscan wine, Prima Pietra

5-6 pieces of stale Tuscan bread (doesn’t sound very enticing, but the outcome will be well worth it)

2 round, large and ripe tomatoes

Chop the onions up finely, place them in a bowl with water and one tablespoon of vinegar, and set them aside for approximately two hours. This will take away the tart taste and soften them up. Peel and cut the cucumber up in thin slivers and set aside. Finally, dice the tomato, getting rid of any excess liquid and seeds.

Take your Tuscan bread and place it in a large bowl. Some recipes say to cut off the crust, but I advise against it. What is Tuscan bread without its crust, anyway? Once you’ve placed the bread in the bowl, pour some water and 1 tablespoon of vinegar over it. You don’t want to drench it; just wet it enough to soften it up.

Once the bread is soft, squeeze any excess water out and break it up with your hands, placing it in another large bowl. The manual labor is quite important, as it’s a crucial part of the Panzanella-making experience. Drain the onions and add them to the bread, followed by cucumbers, tomatoes, basil leaves (I like to break some up and add some whole), salt, pepper and extra-virgin olive oil. Mix well and place in the fridge for about an hour. Add salt, pepper or vinegar until the taste is to your liking. 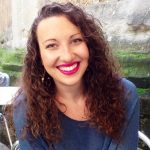 Jennifer L. Monti is a Florentine native who loves languages, good reads and a warm cup of coffee. She completed her Ph.D. at UCLA and has recently moved back to Florence with her husband and kids. Follow her story on Instagram and Facebook @theflorentinemom. 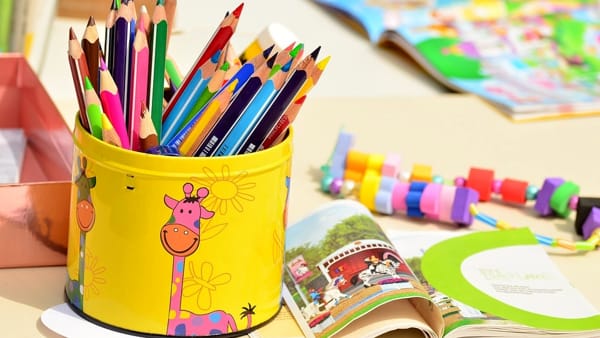 How to enrol your kids in kindergarten in Florence

The second round of kindergarten enrollment in Comune di Firenze (City of Florence) schools will commence on May 3 and last until June 30. For parents who did not have ... 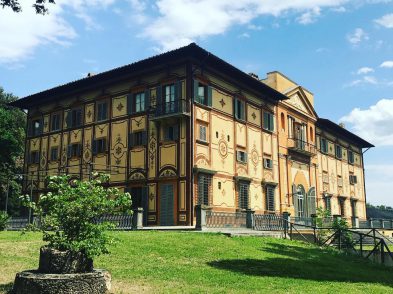 Keeping kids entertained is never as easy as one would like to think. Especially now as schools will remain closed until September, I find myself scrambling to come up with ... 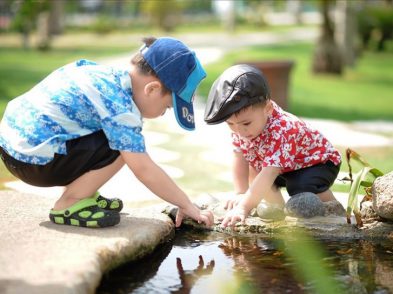 Pre-enrolment now open for summer camps in and around Florence