After British author Tom Benjamin moved to Bologna, he found writing a mystery novel the perfect way to make sense of his new surroundings.

I was never exactly what you could call an Italoholic. Before meeting my Pugliese wife in London, I had only visited Italy once on an ill-fated romantic long weekend to, as it happens, Florence, where I’d struggled to take a photo of my then-girlfriend and I in which one of us wasn’t looking cheesed off. And it wasn’t gorgeous Firenze that had been the problem…

So, when a decade later I accompanied my wife to Bologna for a job interview, I quite literally had to look for the city on a map. I had a vague impression of an industrial conurbation somewhere in the north of Italy dominated by car plants. It turned out I was partially correct, if by cars you’re thinking Ferrari and Lamborghini.

While my wife went for the interview, I was let loose in the city. Oddly now, looking back, it did not immediately capture my imagination. It was midwinter and under grey skies, Bologna, La Rossa, “The Red”, for its predominance of red brick, somehow did not fit my “idea” of what an Italian city should be like. (I know I’m not the only one to have felt this. I recall an Australian woman at my language school a few years later leaving the city because “it’s just not the Italy I expected”.)

It was only that afternoon, when I arrived at via Solferino, a fairly typical residential street in the south of the city, and paused to take in its painted portico that I was struck by the city’s subtle charm, its abiding grace and beauty. More than a dozen years later, I can still point to this as the precise moment I fell for Bologna. Fortunately, because later that day my wife announced she had been offered the job.

The city’s subtlety may explain its relative obscurity. While it has one of the world’s largest intact historical centres and boasts undoubted masterpieces in the Compianto sul Cristo morto by Niccolò dell’Arca and the Marriage of St. Catherine by Filippino Lippi, it is not packed with “sights” as such. It has always been more of a place to soak up the atmosphere, enjoy the local cuisine and cultural life.

For a pair of Londoners habituated to hefty admission charges, those early years in Bologna were a particular joy. Whether it was the artistic riches of the church of San Domenico, the history of Palazzo D’Accursio, the educational legacy of Archiginnasio, or any of the numerous and eclectic museums, one could wander almost anywhere for free. The rare attendants were delighted to come across visitors.

There were also, of course, the porticoes, an almost 40-kilometre labyrinth that lends the city its potent air of charm and mystery. It came as no surprise to learn Bologna is considered the spiritual centre of the Italian Giallo and without a doubt, before I began to work at a homeless canteen to improve my Italian and came into contact with the city’s underbelly; before I read Norman Lewis’s Naples ’44, which set me thinking about a British detective in modern-day Italy; the sheer atmosphere of Bologna was inspiration in itself.

The first of an occasional series featuring sites in Bologna that inspired my novel #AQuietDeathInItaly published by Little Brown this May. “Home, or The Faidate Residence, as it was called, was a fairly typical family compound dating from the late middle ages: basically a mini fortress in a city street, although its battlements, while still visible, had long since been bricked together, and the double doors, wide enough to accommodate a horse-drawn carriage, were now operated by remote control.” https://www.amazon.co.uk/Quiet-Death-Italy-Tom-Benjamin/dp/1472131576/ #detectivefiction #mystery #italylovers #crimefiction #readcrimefiction #italybook #italianholiday #italianvacation #italylovers #travelfiction #travelbooks #bolognatoday #amwriting #italy #publishedauthor #writingcommunity #Debut20 #thecrimevault #crimewritersassociation #italianarchitecture #bolognatoday #bookstagram #readersofinstagram #bookshelf #bookworld #readstagram #instaread #booksbooksbooks #bookblog #bookoftheday #booklife

But it wasn’t all charm and mystery. There was also that ingredient vital to every decent story: tension. Bologna boasts the oldest university in the world and hosts around 60,000 students. With those students, and the city’s radical tradition, came the anarchists. We would frequently stumble across occupied buildings, often former military barracks or hospitals, being squatted by organised groups, as well as the political slogans that are a characteristic of Italian graffiti but seemed especially florid and frequent beneath the porticoes of Bologna. Nevertheless, city life appeared to rub along as it always had, between absurdly expensive cars and radical politics. It seemed a very Italian accommodation.

Then one day I arrived at San Domenico with the intention of pushing through a “secret” door near the choir to soak up the peace of its hidden cloisters, only to find a turnstile requiring an entrance fee. A few weeks later there was an admissions desk at the Archiginnasio. Soon all formerly free-to-roam palazzi and museums were charging. The city had finally “discovered” tourism.

It had also apparently become less accommodating. Major police actions, some involving bulldozers, began to violently evict the squatters in order for the buildings to be sold off to property developers. The students, who had formerly dominated the city centre thanks to its cheap rents, were rapidly beginning to find themselves priced out due to the unfettered growth of Airbnb. Then the body of an ageing political activist was found floating in one of the city’s hidden canals, and Bologna exploded…

Actually, I made that last part up, literally – it’s the beginning of my novel.

But you get the picture. It would be unfair to say the Comune was the sole villain any more than the anarchists were all heroes, but I am struck how by drawing upon the material around me, I inadvertently came to chronicle the end of an era, one that will at least continue to live on in print, even if not all the characters are so lucky. 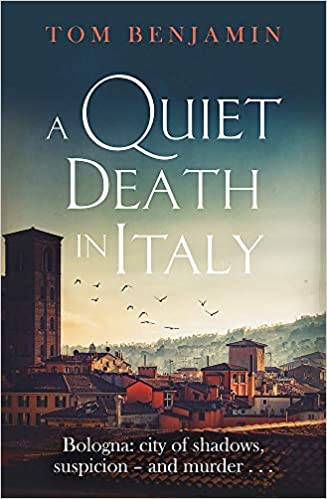 A Quiet Death In Italy is out now from Constable. Get your copy here. 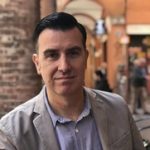 Tom Benjamin began his career as a reporter in north London before becoming a spokesman for Scotland Yard where he was a frequent visitor, for strictly professional reasons, to its famed Black Museum. He went on to work in international aid and public health before moving to Bologna with his Italian wife. Tom's first job in Bologna as a doorman at a homeless canteen exposed him to an Italy less travelled and helped inspire his debut "A Quiet Death In Italy". Follow Tom Benjamin on Twitter, Facebook and Instagram at tombenjaminsays