When William Magee Seton left New York on board the  sailing ship “Sheperdess” on October 2, 1803, he could not have imagined he would never return to his homeland. Born into a wealthy and socially prominent family, he and his wife Elizabeth Baley, known as Eliza, whom he had married in 1794  seemed to have a golden future ahead of them. Educated and talented, they mixed with the likes of Alexander Hamilton and once entertained George Washington. Seton was also a fine musician who played the violin on his own Stradivarius. But, at the beginning of the new century, his father’s once flourishing mercantile business went bankrupt and the couple lost their home and just about all they possessed. Seton now found himself with his own five children as well as a large extended family to support. Added to all this, Seton suffered from tuberculosis. The doctor ordered him to seek a warmer climate so he, his wife and eldest daughter together with his Italian banker and aristocratic friend, Filippo Filicchi, the US consul for the port of Livorno, set sail for Italy.

But misfortune continued to dog the family. On arrival in Livorno on November 18, 1803, the ship detained because it had arrived from New York where there was an outbreak of yellow fever. Passengers were disembarked and taken by rowing boat to the nearby San Jacopo lazaret to be quarantined. After they were finally allowed to leave, the party travelled to Pisa to stay at the Filicchi villa but, because of the damp and insalubrious conditions in the lazaret, William’s condition had worsened. On December 27, 1803 he died, just 35 years old, and was buried in the English cemetery in Livorno. In the  years to come Eliza would return to America, convert to catholicism, become a nun and devote her life to the poor.  She died in 1821. In 1975, Pope Paul VI proclaimed her a saint, the first person born in the United States of America to be canonised. In 2004, although not a catholic, William’s remains were transferred to the modern Church of St. Elizabeth Seton, dedicated to his wife, in the Livorno’s piazza Lavagna. 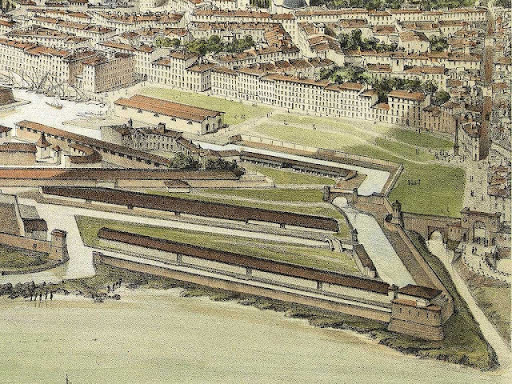 A quarantine station in nineteenth-century Livorno

The San Jacopo lazaret was not the first lazaret or maritime quarantine station to be built in Livorno for the isolation of people with contagious diseases like leprosy or the plague. In 1582, Cosimo II de’ Medici had one erected near the Torre del Fanale which was finished by his son Francesco I in 1585. As more space was required, the large, guarded and strictly regimented San Rocco lazaret was erected and was operational until it closed in 1852.

Under his enlightened governance, the realm of Grand Duke of Tuscany Ferdinando I de’ Medici (1549-1609) flourished. He carried out a series of public works and boosted foreign trade by improving Livorno’s port. Ships and merchandise arrived there from all over the then known world,  and particularly from the East. But this brought with it an alarming spread of contagious diseases within the city. Initially, ships had to be diverted for quarantine to Portoferraio on Elba Island or to the island of Giglio. Because this significantly damaged commerce in the port, Ferdinando II (1610-1670) ordered, with a decree in May 1643, the erection of the San Jacopo lazaret, at the time, several kilometres from the city centre.

The San Jacopo lazaret was completed in 1648 and took its name from the nearby parish church of San Jacopo in Acquaviva, a place where there had once been a hermitage and later an Augustinian convent. In 1721, Cosimo III de’ Medici (1642-1723) surrounded the lazaret with a new wall and a canal giving access to the San Rocco lazaret and the sea while, in 1754, Francesco I (1708-1765) improved conditions for the workers and for the storage of the compounded cargoes.

During the siege and sacking of Livorno during Italy’s 1st War of Independence, eight patriots were shot by Austrian troops in the  San Jacopo lazaret for “having borne weapons against them”. The inscription on their tomb in the cemetery of the infirmary reads, “Here lay the bodies of eight harmless young men, shot by the Austrians on 11 May 1849, because of the lust for Italian blood alone”. In 1855, a hospital and chapel were added to the complex for those in quarantine.

A kindergarten for sailors’ children was set up within the San Jacopo lazaret after the Società di Soccorso agli Asfittici (Society for the Relief of the Asphyxiated), caused by drowning or other cause, was established in Livorno in 1871. Inspired by the Royal Humane Society of London, which had been in existence since 1774, Dr Giacomo Ancona, “a friend of the poor” was its founder.

The prestigious and imposing Naval Academy of Livorno was inaugurated in November 1866 and occupied the area of the old San Jacopo lazaret which Royal Navy Commission considered suitable because of its vicinity to the seafront, because it was out of the city centre and because its buildings could be converted to the needs of the training school. In 1913, this was soon extended to absorb the San Leopoldo lazaret further south. This lazaret had been built in 1773 by Grand Duke Leopoldo II (1747-1792) and, at the time, was then one of the biggest and most innovative in Europe.