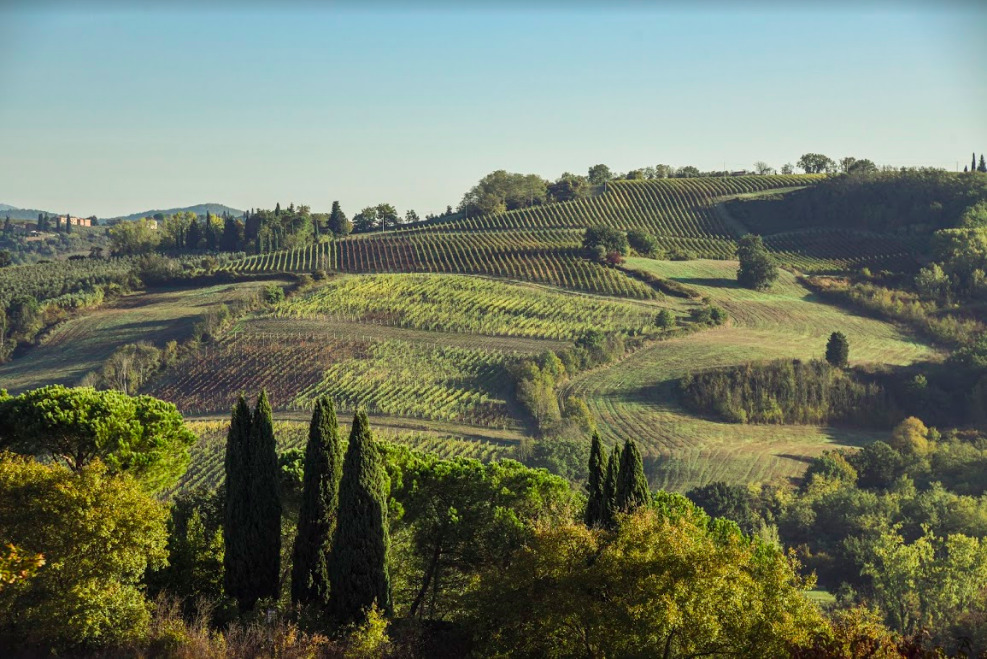 “Prayer is a suspension of the presumption of your ego,” explains Alessandro, his kind eyes sparkling with empathy, after showing us around the cell where the Blessed Giulia is said to have spent 30 years of her life in Certaldo Alto. “It’s about letting go and going beyond.” The Florentine went for a healing experience in Valdelsa Empolese—Montespertoli, Certaldo, Gambassi Terme, Montaione and Castelfiorentino—on behalf of Toscana Promozione Turistica, Tuscany’s regional tourism board.

Montespertoli: tenors and toiling the land 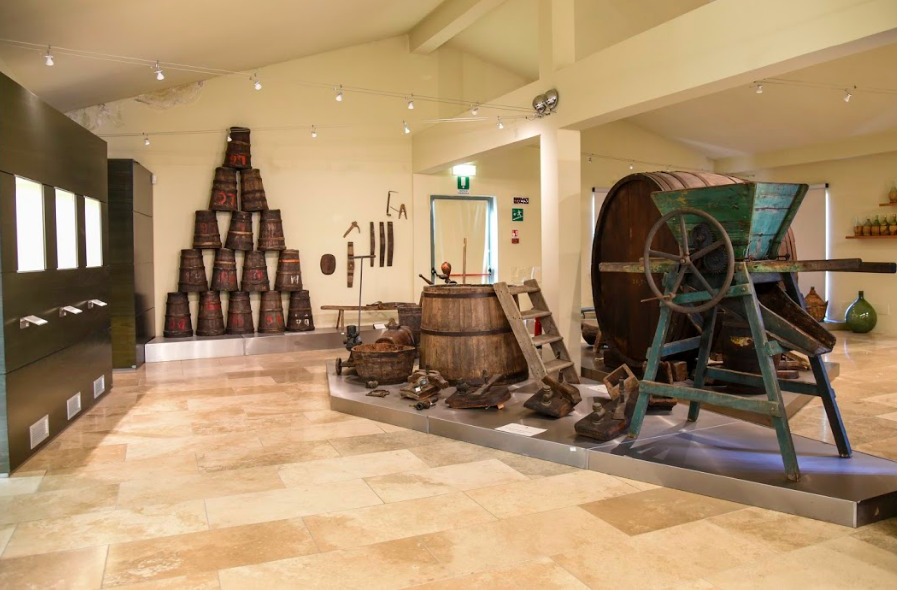 Famous for inspiring Giovanni Boccaccio and Leonardo da Vinci, our day’s soothing adventures commence as we are forced to slow down behind a three-wheeler Ape on the winding road up to Montespertoli. The morning mist is lingering over the vine-clad slopes, leaves turning to gold having yielded this vintage’s generous Sangiovese harvest. First up is a visit to the Amedeo Bassi Museum, a two-room gallery appreciated by opera lovers dazzled by playbills, props and video footage about the town’s tenor of humble origin, who enjoyed international acclaim performing at London’s Covent Garden, New York’s Metropolitan Opera and Teatro Colón in Buenos Aires before concentrating on Wagner in his later years. Filled with arias, we head for the I Lecci Centre for Wine Culture, whose halls provide insight into past winemaking traditions with vineyard tools such as the piccone (pickaxe), zappa (hoe) and vanga (spade), old barrels and presses, as well as explaining the local soils and celebrating the popular Grape Festival, a major happening in the town since 1928. “Our guests, young or old, locals or internationals, are intrigued by learning more about how wine was made around Montespertoli in past times, the way my grandfather makes it,” explains our proud local guide. 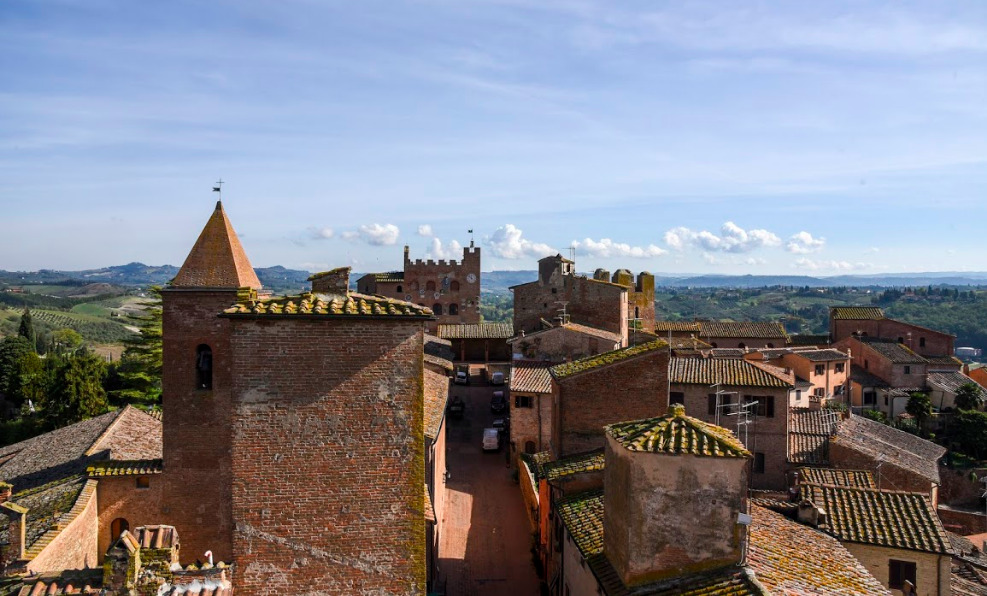 On top of the tower of the Boccaccio House Museum / ph. @marcobadiani

The drive from Montespertoli to Certaldo Alto is breathtakingly beautiful. We whoop with joy as the road unpeels a fairytale sea of symmetrical vines rippling in the valley below and wisps of silvery green olive groves carve out tone-on-tone islands. At a certain point, a single red stripe of changing vines appears before our unbelieving eyes. A kaleidoscope of Vespas, powder blue, electric pink and fluorescent green, are parked next to an unassuming farmhouse. A mini terracotta-tiled dome tops a stone chapel. We stop and breathe in the beauty, all too aware of its antidotal qualities and the pressing need to carpe diem, to embrace all this wonder right now. The medieval marvels of Certaldo Alto await, a pristinely maintained town paved and constructed in slim bricks. With its well-stocked archive, contemporary garden and relics revealing all about the Decameron’s writer, the Boccaccio House Museum is a bucket list destination for medieval scholars and literature lovers all over the world. Mull over the women’s slippers found within the walls of the writer’s home, examine his will and feel a sense of camaraderie while gazing at Pietro Benvenuti’s 1826 painting of Boccaccio at his desk, presumably penning his collection of tales told by people who fled to the Tuscan countryside to escape the Black Death. 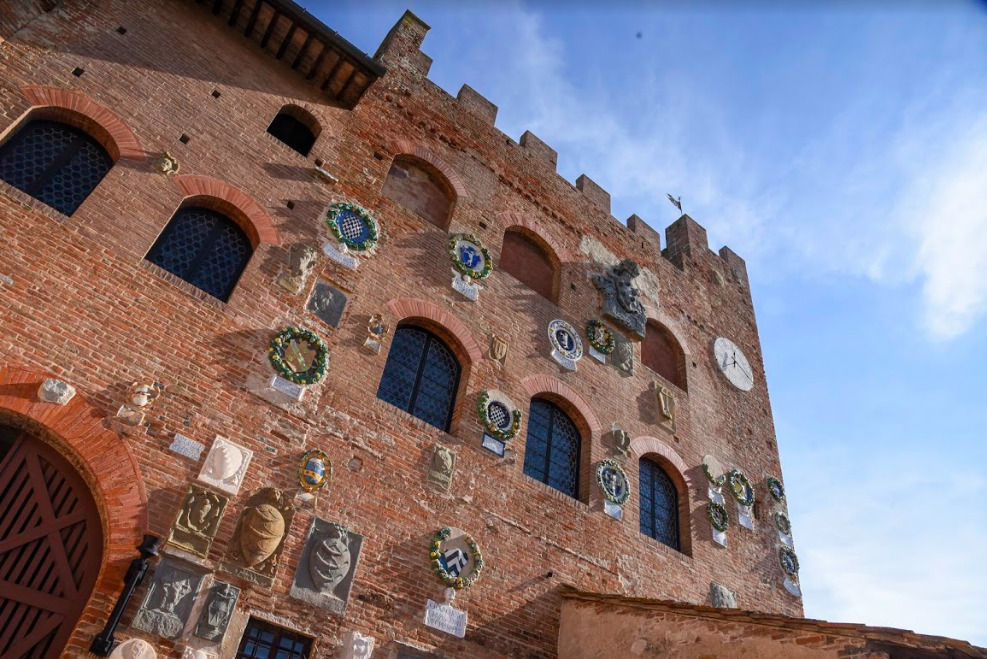 Step by step, we have time to consider those 100 stories and their relevance to our current circumstances while climbing the tower and gazing at the surrounding rural vistas from the top. Just up the red-brick road stands Palazzo Pretorio, Certaldo’s centre of political power in the Middle Ages, now a testimony to the former ruling families, whose heraldry scatters the façade and vaulted entrance passage in an array of temptingly tactile materials. Surprises lie within and without the twelfth-century walls: a Japanese garden due to a twinning with Kanra, northwest of Tokyo; a contemporary exhibition centred on John Edward Williams’s novel Stoner; and a Boccaccio-inspired show in the stark upper halls. Stand in awe in front of Benozzo Gozzoli’s Tabernacle of the Executed in the adjacent Church of St. Thomas and Prospero. “We noticed a 10 percent increase in tourists this summer in Certaldo, mostly Italians contentedly rediscovering their own country,” explains local guide Fabio, as he points out the Medici coat of arms on the façade of Palazzo Pretorio. We can see why, chatting and tucking into a hearty lunch of Certaldo onion soup, a platter of cold cuts and a flask of Chianti. After lunch, Alessandro Gigli, a local personality and artistic director of the town’s renowned street theatre festival Mercantia, kindly escorts us around the religious artefacts in the Sacred Art Museum before silently peering into the cell where the Blessed Giulia is said to have spent 30 years of her life, performing miracles such as producing fresh flowers and handing them to children through the tiny window. A peaceful presence lingers in the gelid space, giving rise to a shiver and the feeling that, yes, something otherworldly happened here. Alessandro bids us a generous farewell with words of wisdom and copies of his children’s fairytale books.

Gambassi Terme: springs and slowing down 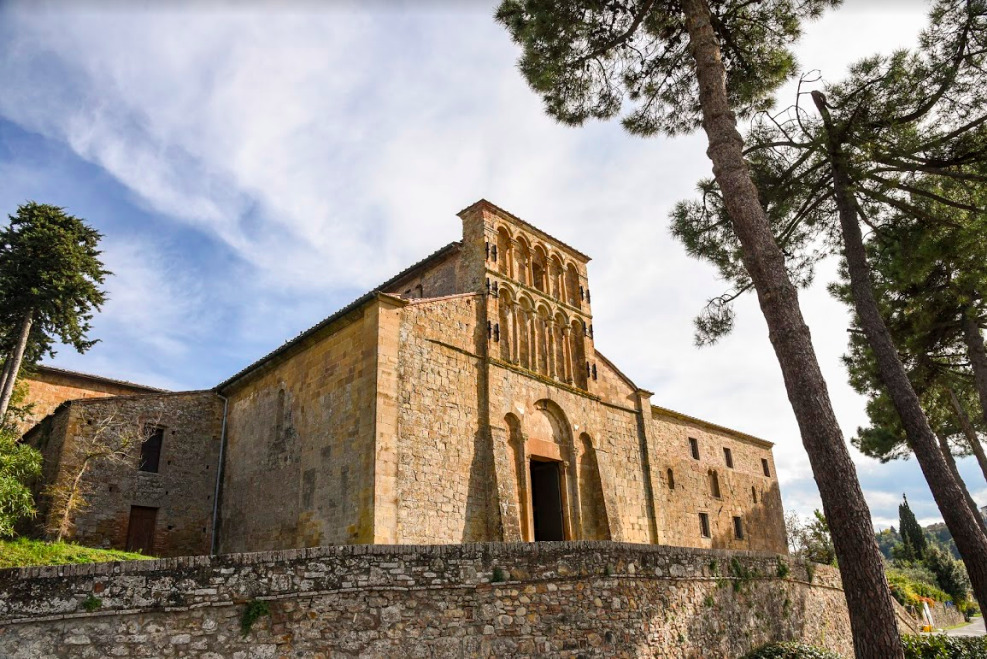 Sitting on a centuries-old stone parapet in front of the warm and welcoming sandstone frontage of the Pieve di Santa Maria a Chianni, Ilaria gently explains the highlights of her hometown. “Gambassi Terme is a place for walking, outdoor activities and for slowing down. The Via Francigena, the pilgrims’ way to Rome, runs right past here. There’s the Grotte di Maurizio, a curiously carved cave where a local man spent thirteen years as a hermit back in the 1920s and ‘30s. And the Bollori, a sulphurous spring where you can dip your feet.” A stroll around the sober church reveals a circular economy long before its time with columns and capitals put to recycled use, all styled differently in plant and anthropomorphic designs. Gambassi Terme is the prettiest of places with gently sloping streets, warm-hued buildings and occasional cat. “We know everyone by name and do our shopping here in the town,” says Ilaria, smiling. “It’s friendly.” It’s also a village resplendent in traditions, including the August Palio delle Contrade, where the four neighbourhoods—Membrino, Belvedere, i’Porcello and la Pieve—battle it out in the gara delle bigonce, a running race wearing wooden containers. Plus, there’s the Glass Museum, bearing witness to the town’s pre-industrial history of furnaces and glassmaking. 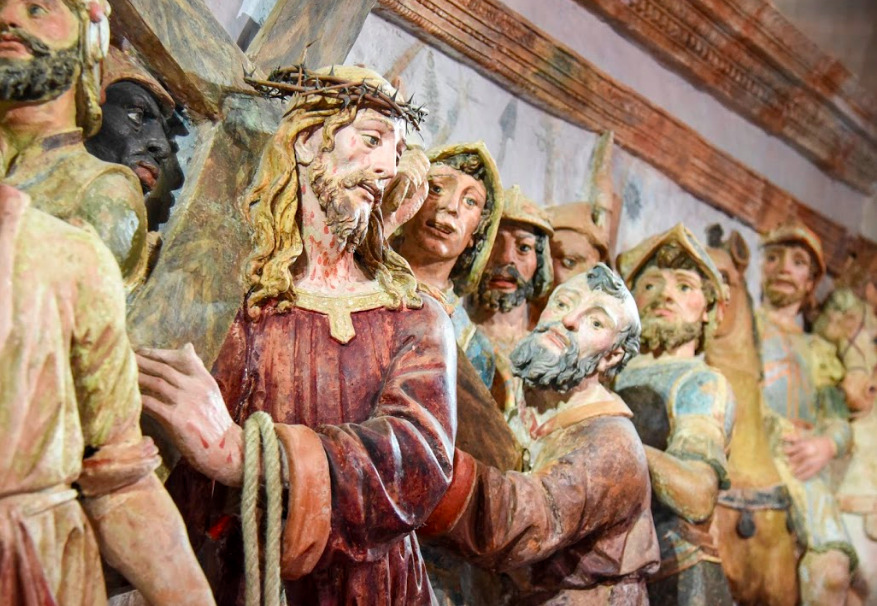 The Calvary scene at The Holy Mount of San Vivaldo / ph. @marcobadiani

A short hop away, Montaione is another picturesque town with wide-ranging views over the Valdelsa Empolese plain, but there’s enlightenment and the unexpected to be found in the nearby woodland of The Holy Mount of San Vivaldo. Only two friars now reside at the monastery, but a steady flow of visitors seek out the intense spirituality nestled in the sixteenth-century chapels. Antonello, the caretaker, keeps the mood jovial as he unlocks one surprise gem after another. We walk up the steps into Monte Sion, faced with adjacent glazed terracotta scenes of the Last Supper and Jesus’ feet washing, the faces keen and alert gestures, before walking dumbstruck into the Pentecost, a deeply moving representation of the Holy Spirit’s descent to the Virgin Mary and the twelve Apostles in cool tones. The Calvary is a procession from right to left, with the crowd contrasting with Christ’s serene expression, while the Lady of Sorrows stops us all in our tracks, the large chapel reduced in size by her aged and stricken face, providing instantaneous perspective on our own life and times. I feel overwhelmed by the visit, which necessitates time and introspection, a unique experience not to be rushed. We compliment Antonello for his knowledge and humour, saying that we’ll be back soon, but only if he’s the one to show us around. “It’s all about them [the sculptures, ed.], not me,” he quips. “They’ve been here for 500 years.”

Castelfiorentino is the final leg on our day’s tour of the Valdelsa Empolese and the destination is the BEGO Museum. A startlingly modern building in the otherwise traditional Tuscan town, the museum was purpose built in 2009 to house two of Benozzo Gozzoli’s tabernacle frescoes, which were removed intact from their original locations near Castelfiorentino using an innovative technique. 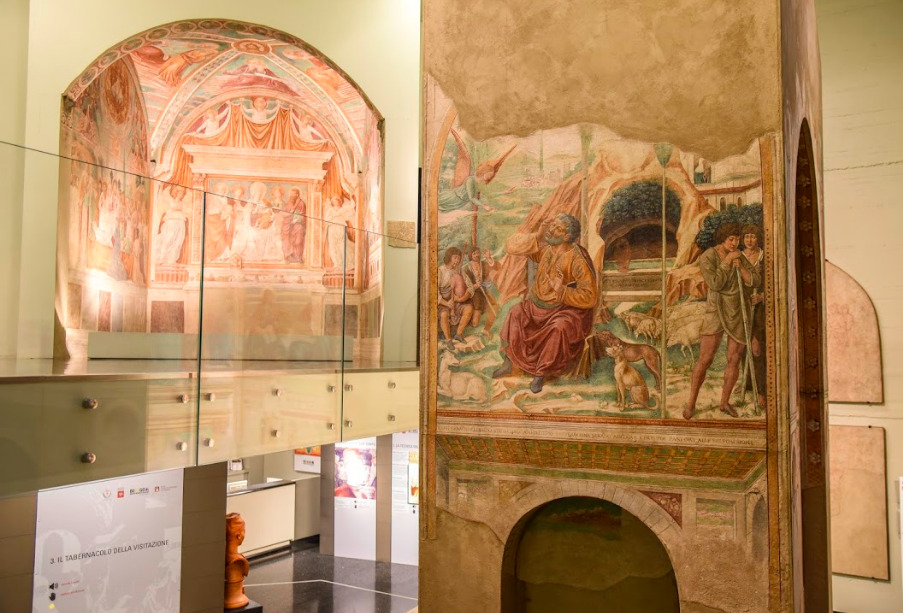 The Visitation is the main draw on the ground floor, the walls lined with preparatory drawings for the tabernacles, and the mezzanine is home to the Madonna of the Coughs, although both artworks are in constant dialogue due to the contemporary architecture, each visible while surveying the other. It’s an unusual museum experience, one that calls for depth and a slow examination of the works, especially due to the lack of crowds and the absolute focus on just two works. Humanity and inclusivity prevail in these halls, that kindness we’ve noticed all day elevated to another level of thoughtfulness, as the museum cares about bringing the art to all through experiences for sight- and hearing-impaired visitors, Alzheimer sufferers and art lovers with intellectual disabilities. Beauty has never been more healing than in the hills and towns of the Valdelsa Empolese.