Via degli Dei: hiking between Bologna and Florence 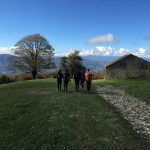 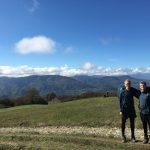 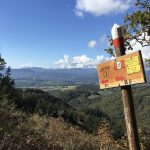 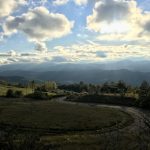 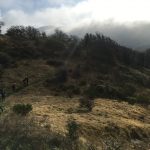 PhD law students at the European University Institute Dominik Dworniczak and Hubert Bekisz are based in Florence for the next four years. Both enjoy hiking and decided to attempt the Via degli Dei, the historic trail between Bologna and Florence.

Flora Windebank: Run me through what you did. You hiked the Via degli Dei? What was that like?

Hubert Bekisz: Yeah, it was great. I have to admit, the weather was perfect; we’d been a little bit afraid about it because, according to the forecast, it was supposed to be raining. Basically, don’t trust the forecast because it never seems to work! But in the end, we had ideal conditions in which to hike. And yes, we followed the Via degli Dei, which is a traditional hike to Florence.

HB: So there’s a history, a tradition behind the Via degli Dei. It’s a hugely popular hiking route, which comes to about 137km.

DD: Maybe slightly less, because we took a little detour during the hike. I was the map guide. I didn’t have Google Maps, but there are road signs everywhere; it’s quite popular here. But there are plenty of different variations of Via degli Dei, so sometimes you actually don’t know which variation you’re going through, so that’s how we did this small detour. Well, I say small, it was about five kilometres at least.

HB: Maybe even ten. It was our first day. People were a bit despondent, especially because we had four more days ahead of us, and some people weren’t even sure they wanted to continue; they were considering giving up.
DD: We were in a group of initially eleven, then one person dropped out in Bologna, so there were ten of us before we’d even started.

HB: Each day someone would drop out.

DD: We were the last survivors!

HB: Yeah, only five people finished the entire trail. Basically, some people were planning to do so before because they had some other obligations with the European University Institute, where we study. But some people also felt that they couldn’t continue; they were a little injured and had problems with their legs, and so on. So, in the end, only five people finished. 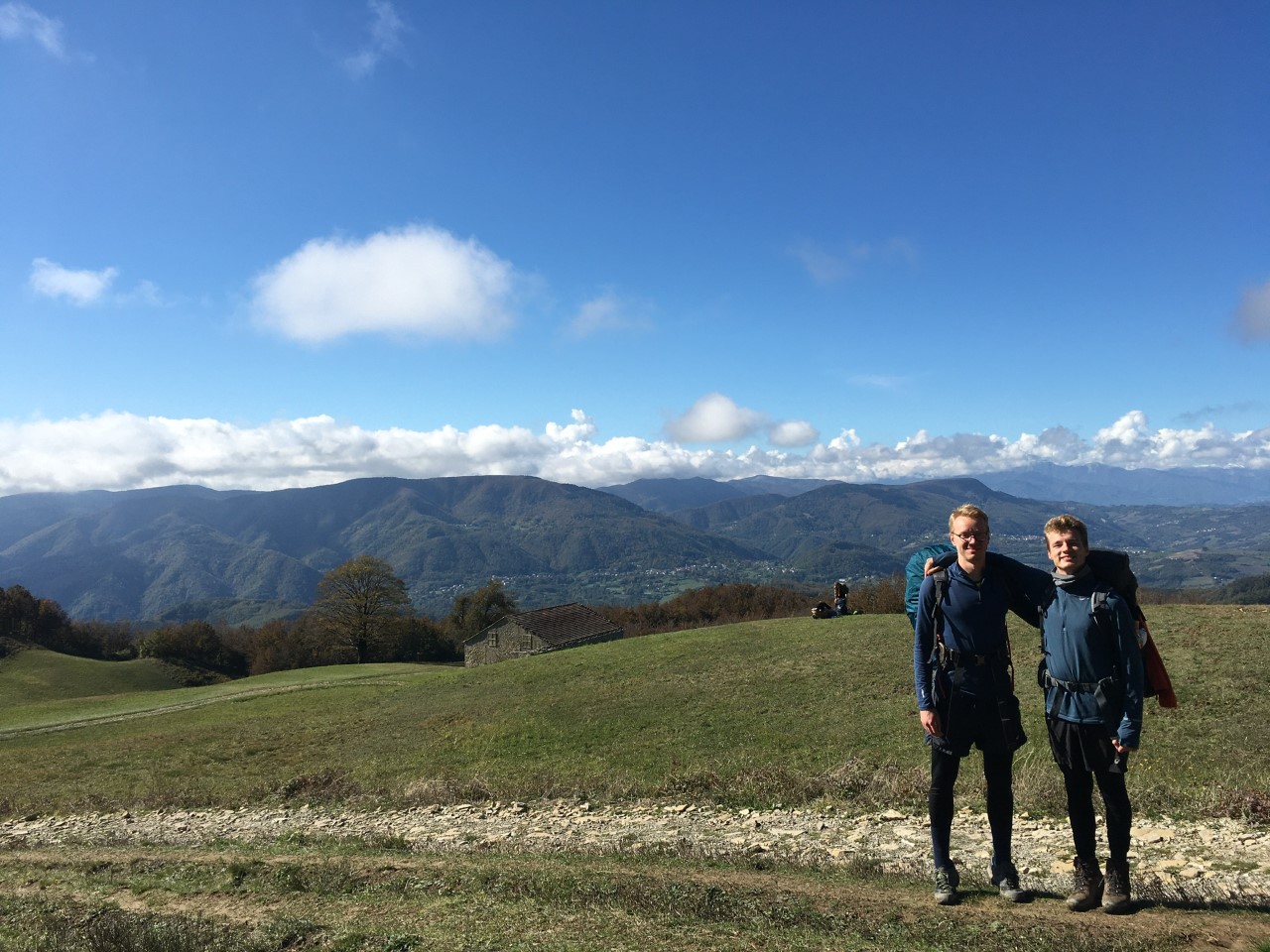 Dominik Dworniczak and Hubert Bekisz hiking the Via degli Dei

FW: What made you want to walk the Via degli Dei in the first place?

HB: Previously we’d done some small hikes, more or less only around the one-day mark, with people from our University, a group of 31 or so, in the first-year law department, so we tried to integrate somehow. We’d decided to go hiking several times together. Once we went to Vaglia and then Montesenario (it’s a one day route for hiking, as well as part of the last day of Via degli Dei). Being at Montesenario, where there’s a kind of sanctuary, we met some other hikers with huge backpacks and figured that they’d probably been hiking for a couple of days. 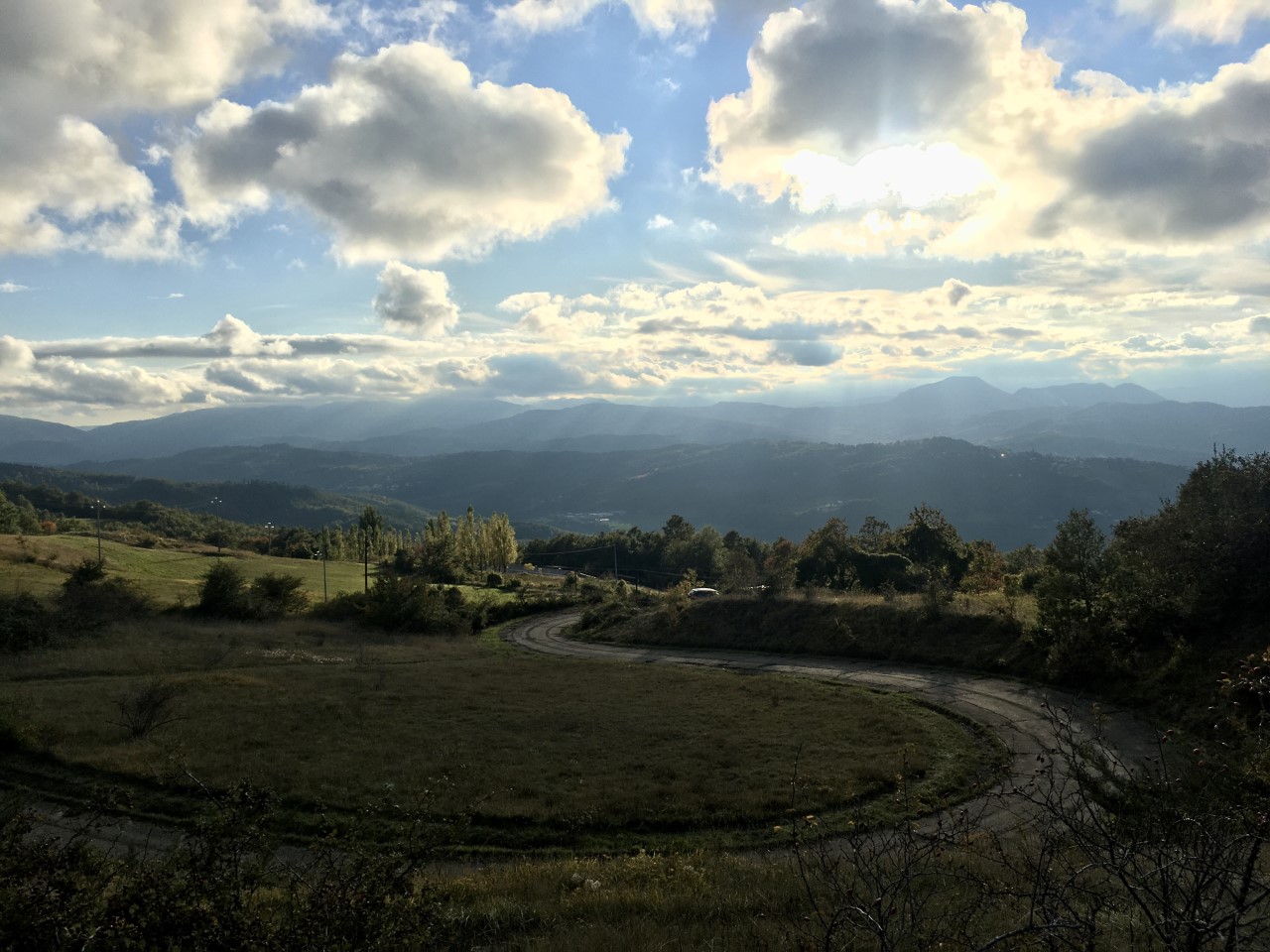 FW: Tell me about the places you stayed in, what were they like?

HB: They were very [pause] different.

HB: The walk lasts five days and each day ends in a place where there’s some form of accommodation. Normally you just stay in the middle of nature between Tuscany and Emilia Romagna; each day ends in a really small town. For our first night, we stayed in a hostel, then a B&B, then another hotel…

DD: I wouldn’t quite say a hotel, it was an albergo. It was a three-star hotel and we had this huge dinner with people who were working there and we had a drink with them; the chef came to ask how everything was going—it just felt like a real local experience. Everywhere we stayed wasn’t just accommodation, it had a genuine local feel to it. In the restaurants, there were only locals; in the bars, only locals. We were just spending time surrounded by Italians. There was an ambience that wasn’t just a touristic hike because there weren’t any foreigners there. You should probably be able to speak some Italian to make the most of the experience. We had two Italians with us, which helped a lot.

DD: We had a sort of daily order. We’d wake up at 7, pack and grab some breakfast at 7:30, leave at 8 and walk all day, probably have lunch at 1, and arrive at our accommodation at around 5-6pm, have a shower, go have dinner for about 2 or 3 hours and drink wine. 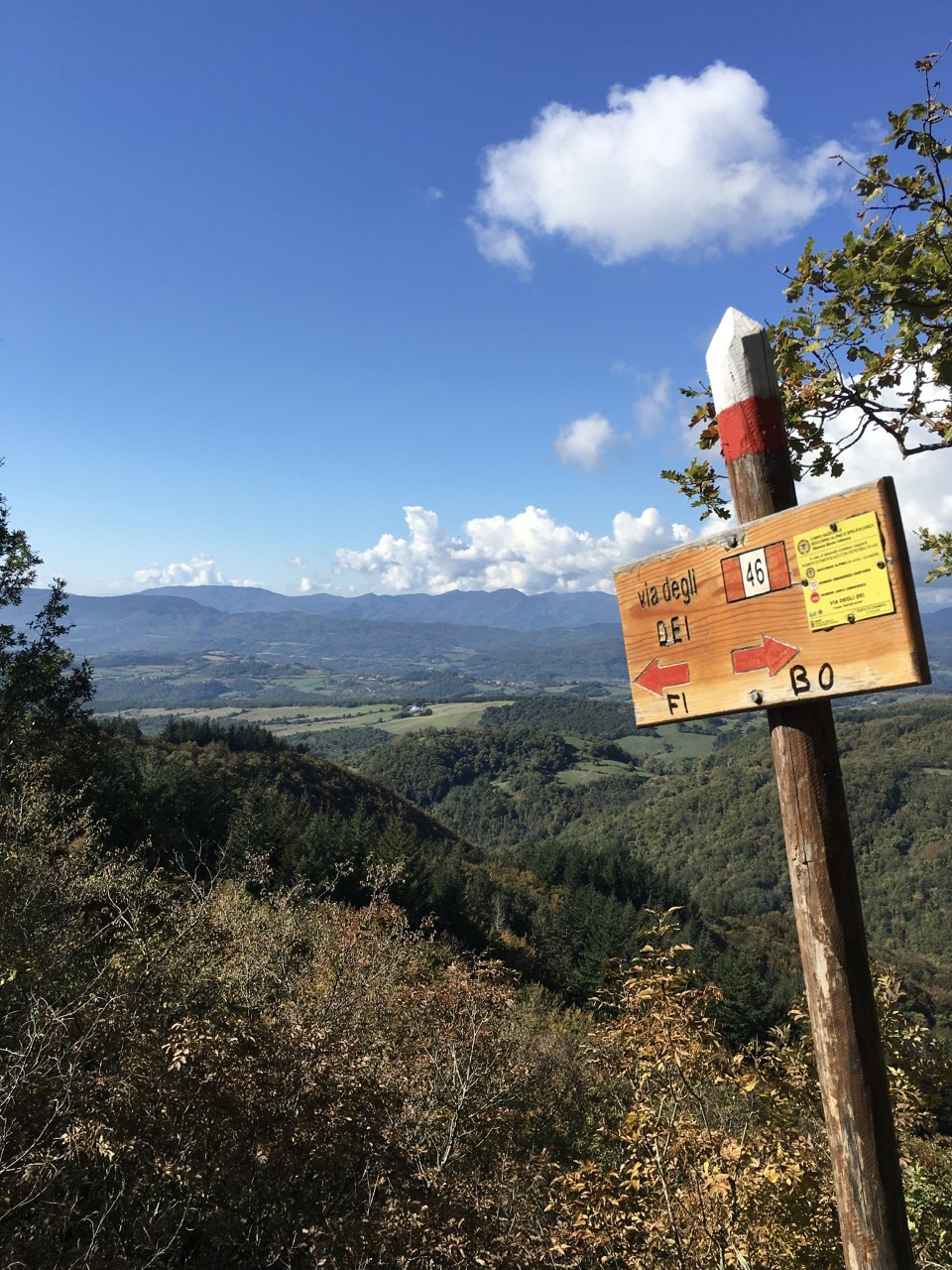 FW: Did anything interesting happen while you were on the trail?

DD: We met some women who brought us bad luck. Each day we met them, something bad happened! It’s like they were cursed. We called them “The Ladies”. One was elderly, probably in her seventies, and we think she was with her daughters. The first day we met them, we ended up taking that detour.

HB: Then on the second day, just after meeting them, we accidentally ended up on a highway with incredibly fast cars. So, every time we met them, we were inflicted with bad luck.

DD: In the end, they started to laugh at us, saying “At the beginning, you were in a group of eleven and now there’s only seven of you. What happened?”

HB: We were just hiking and they were doing the Via degli Dei too, so naturally we would just bump into them at various points along the route.

FW: Is it a strenuous hike or would you say it’s doable for most people?

DD: Compared to actual hikes, I’d say it was more of a trek. There aren’t any particularly high mountains, unlike the Apennines—there’s a village called Abetone and near it you have heights of over 2,000 metres—whereas the highest point along Via degli Dei was roughly 1,300 metres above sea level. It’s more about slowly walking uphill, rather than climbing. It’s tiring, for sure, but it’s not a full-blown hike.

HB: I think anyone could do it. We came across elderly people doing the hike—

for example, the woman we were talking about earlier—which was really impressive. It’s not too demanding, but there were challenging parts. When the ground was muddy, that was certainly interesting. Many of us struggled with that; walking uphill or downhill was difficult and became more like mud-skating. Even though the weather was good, the ground was still not ideal. 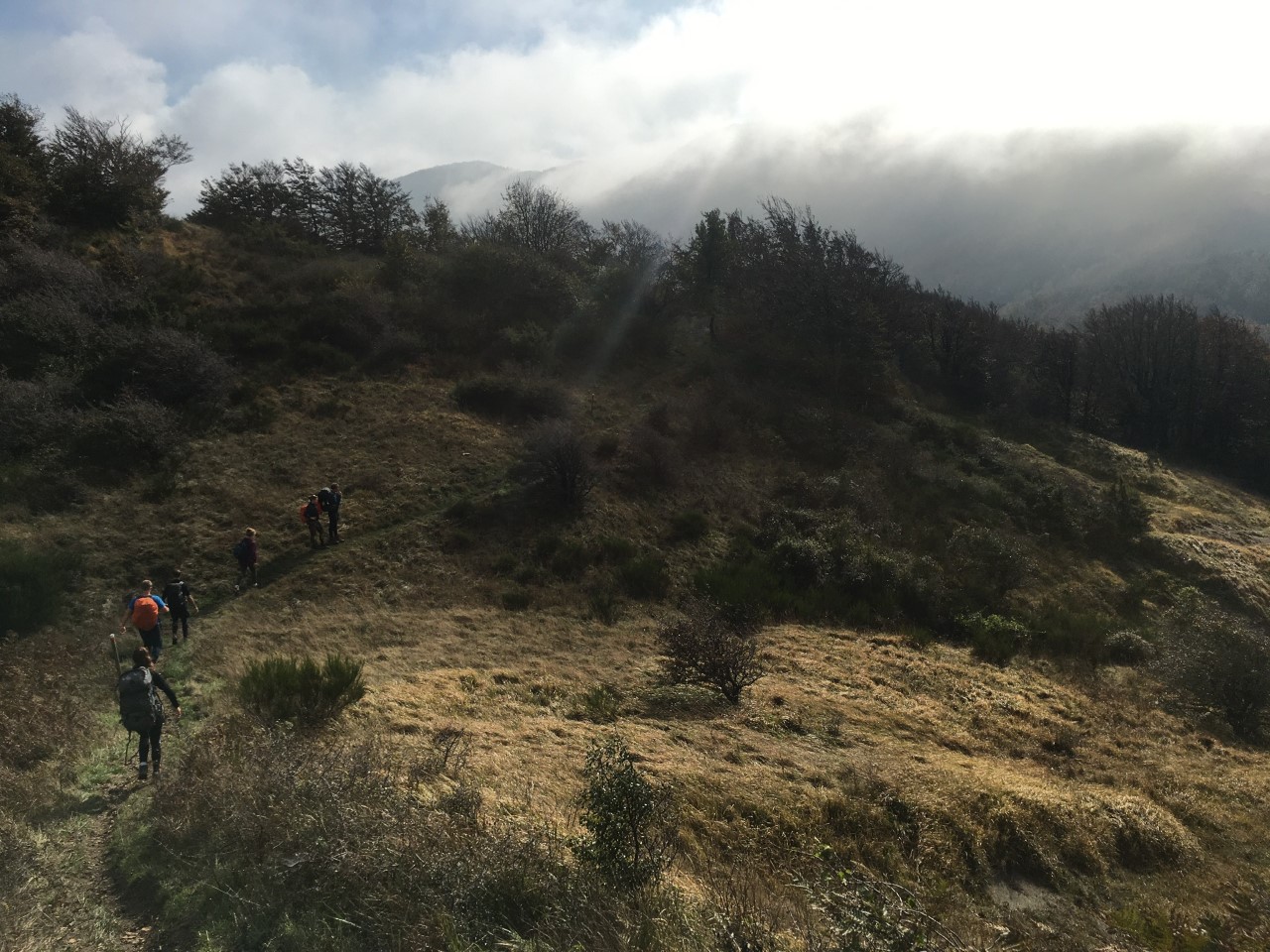 FW: Are you enthusiastic hikers? Have you done things like this beforehand or is it the first time you’ve done a hike like this?

HB: Not really. In my case, I’ve never really been a hiker. I’ve done a couple of one-day hikes here, but it was completely different. I’ve always done sport, but never really anything to do with walking in mountains or hiking. It was something new for me, I have to admit.

DD: I’ve been really into hiking for about four years now. I spent a while in Austria, near the Alps, and would hike a lot there. As I said before, Via degli Dei doesn’t really depend on hiking experience because it’s not like a typical hiking trail. It’s good training to prepare for tougher hikes. I remember seeing some people running Via degli Dei to train. But importantly, it’s not just a trekking experience. It allows you to discover something different and see Florence’s surroundings. Even if you don’t speak Italian, you get to spend time with locals. You have this experience and atmosphere that is different to Florence, whereas these places are authentic. Even when you cross the border from Emilia Romagna, you can feel the difference. The landscape is totally different. In Tuscany, you see rolling hills with vineyards and olive trees, and you don’t really see that in Emilia Romagna. The architecture is different, too. I remember the first town we came across once we got to Tuscany, called Sant’Agata. It’s a tiny town and there were just locals in the bar, no young people, just an atmosphere of people who’d lived there their whole life.

HB: Yeah, you really do appreciate the towns you come across and Sant’Agata is a great example of that. We had lunch there—we always tried to have lunch in a small village we were crossing—and it was really beautiful. You can really experience the lesser-known places in Tuscany.

FW: What about the food? Did you eat anything particularly interesting?

DD: I wouldn’t say so. Italians are quite uniform in their cuisine, maybe not in Florence because they have their specialties and stick with the Florentine identity. But when it comes to the places we visited, I wouldn’t say they had dishes that were regional specialties. That’s another difference to the other hikes I’ve done in other countries: often there’s a lot of local food.

HB: We were probably not that focused on cuisine, to be honest. Our daily routine was just having a panino for lunch and eating pizza or pasta for dinner. The bread was particularly good though!

FW: Was there a particular place that stood out for you?

DD: I’d say Bologna for sure. It was really different to Florence. The architecture is more medieval. Sometimes you feel like you’re in a fairytale here, whereas in Bologna you have that thick atmosphere of a medieval town.

HB: I don’t think I have a particular place. I mean, Sant’Agata was really gorgeous and memorable, but Via degli Dei was an overall amazing experience.

DD: I’d compare Sant’Agata to this hike in Montesenario we did a month ago. We ended up in this random villa, in the Tuscan hills, with a certain atmosphere that’s different to Florence. There are really old buildings and the landscape is just stunning. It was like a Heimat, which is difficult to translate from the German, but basically means it’s something that’s connected to the motherland, the food, the landscape, the climate, the clothes that you wear, but it was a Tuscan Heimat.

FW: Would you recommend doing the Via degli Dei to other people?

HB: I’d really recommend it. Especially during the current pandemic, there aren’t that many activities you can do safely. The risk of Coronavirus is considerably lower while hiking. Aside from the virus, it’s just a really great experience to bond with people and to get to know Tuscany. You really do learn a huge amount about Italy; you connect with the people and with the place.

DD: I did a Master’s in History and I love the feeling of experiencing the history of a place when you’re walking. You can really feel that and every day is different. Our first night, which we spent in Badolo, a small village full of cottages where you can also see the highway, was completely different to the history surrounding Bologna. Another day, we went to Madonna dei Fornelli, then Monte di Fo, which has this northern-style forest, something you just really don’t expect to see in Italy. Every day there was something unexpected. To really feel and understand Tuscany, you need to experience the deeply authentic places. If we hadn’t done Via degli Dei, we wouldn’t have had that opportunity.

For resources on walking the Via degli Dei, see www.viadeglidei.it. 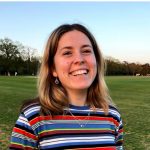 Flora Windebank is a modern languages student from Portsmouth. She is constantly overwhelmed at how lucky she is to have lived one of the most beautiful cities in the world (not Portsmouth); she’s most likely to be found in a cafe or bookshop, probably dabbling in some sort of writing while scrolling through Twitter (follow her on @FloraWindebank).