Mayor Dario Nardella reflected on the importance of pushing ahead with the usual Christmas lights, trees and festival as a “Christmas without lights would be a Christmas without hope”. Describing this year’s Christmas celebrations as “more sombre, more intimate, more reflective”, the going ahead of these festivities may seem a contentious choice given the difficulties we are experiencing, but the point was made that these are symbols of resilience and the strength to move forward, giving us comfort through beauty. The slogan taken this year is “The light that unites us”, keeping us connected through these times. For this reason, a decision was also made to illuminate Florence’s main hospitals as a message of gratitude and support for the incredible work of frontline workers throughout the pandemic. “Florence keeps its lights on and sends a message of closeness, respect and hope to citizens at the end of a very difficult year,” commented Mayor Nardella.

This year’s video mapping, projections, lights and artistic installations of the Flight Festival will be under the artistic direction of Sergio Risaliti (director of Museo Novecento). This edition is titled Sight, From the Dark Wood to the Light, as Risaliti explains, “We cannot deny that we all have need to see a light guiding us in this dark forest, when the straight path of progress seems lost.”

The annual F-Light Festival will embrace a Dante theme ahead of the 700th anniversary of the Supreme Poet’s death in 2021. The video-mapping shows will travel through Dante’s Divine Comedy, finishing with Paradiso, where Dante also encountered the lights of Christmas. Launching on December 8, the show will go on until January 6, 2021, helping us to commence the new year with a bit of brightness. The light installations will be visible on the Ponte Vecchio, at the Chamber of Commerce, Palazzo Medici Riccardi, in piazza Santissima Annunziata and at the Museo Novecento.

To pay tribute to the city’s hospitals during the health emergency, three light beams have been created in partnership with Silfi Spa that will be projected into the sky on a date near Christmas that has not yet been confirmed. The installation is entitled The Beacons of Resistance: Faith, Hope, Charity and will begin from piazza della Repubblica, before continuing to the Baptistery and, finally, Santa Maria Nuova Hospital.

The magic moment when the Christmas tree lights are switched on is highly anticipated each year. The trees in piazza del Duomo and by the Palazzo Vecchio will be revealed in all their glory on December 7 with a more muted “switch-on” than has been held in previous years. The ceremony will also be live streamed on The Florentine‘s Instagram account.

The three artists’ trees will be installed in piazza Bartali by artist Michelangelo Pistoletto, in piazza Santo Spirito by Mimmo Paladino (both on December 8) and in piazza Santa Maria Novella by Domenico Bianchi (on December 15). 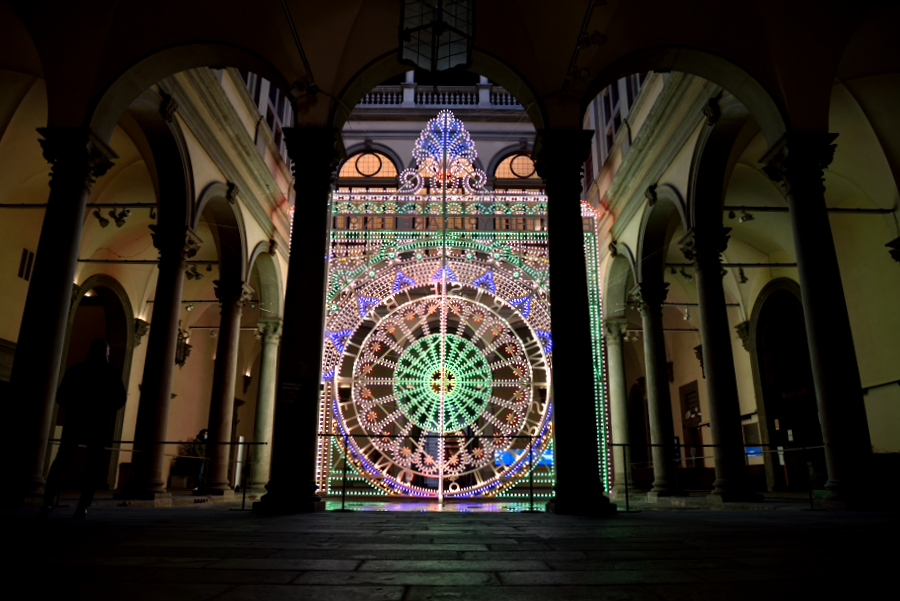 Palazzo Strozzi has presented its bright new installation We Rise by Lifting Others by one of Italy’s most celebrated contemporary artists, Marinella Senatore. Renowned for merging disciplines such as the visual arts, dance and theatre, this show is a timely reflection on the idea of community and relationships at a time when physical distancing continues to have a devastating impact. The festive art moment consists of a cathartic installation in the Renaissance courtyard inspired by the popular southern Italian luminaria, or “artist’s lighting” tradition. 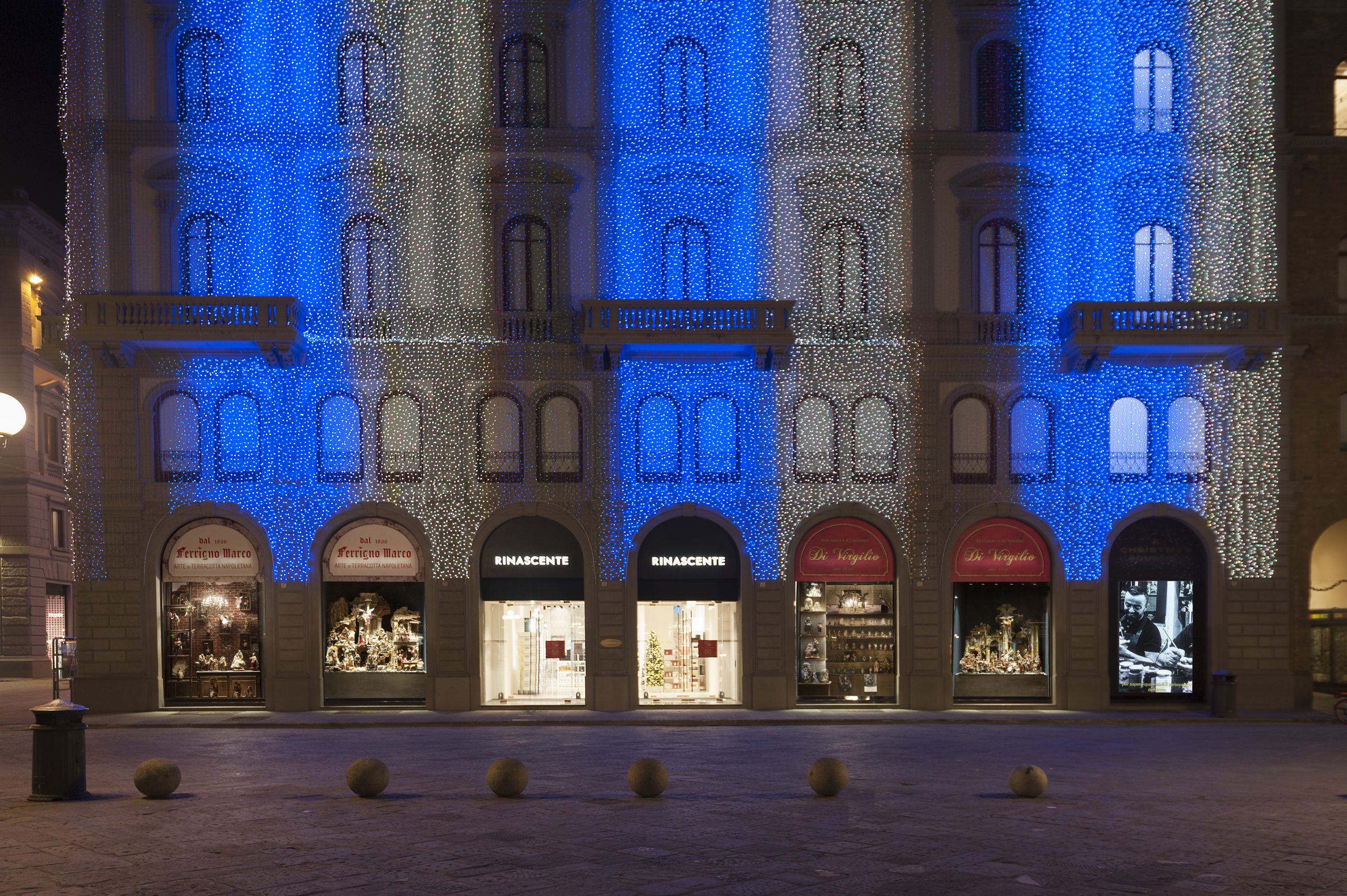 A special mention must go to Rinascente, whose spectacular light display adorns the façade of the palazzo in piazza della Repubblica in addition to beautiful Naples-inspired nativity scenes by Di Virgilio 1830 and Marco Ferrigno 1836 in the department store’s windows. Idols of the southern Italian city Maradona and Eduardo De Filippo feature as life-size models in the via degli Speziali windows.