Every year, the first thing I do when preparing for the festive season is to hang a circular Christmas wreath on my front door. I used to make my own of laurels, leaves and holly, but now I simply unpack the beautiful wreath I bought at the Christmas market in piazza Santa Croce from its cardboard box and decorate my entryway to welcome anyone who comes to visit. 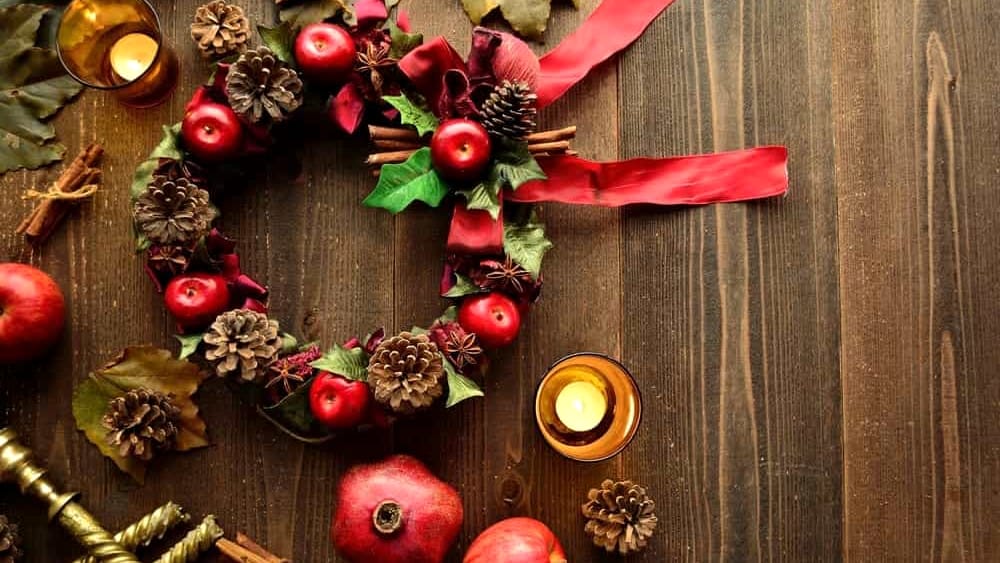 The word “wreath” comes from the Old English word writhan, meaning “to twist”. Exactly where wreaths originated is unknown, but the candidates range from the Persian Empire, Ancient Egypt, Ancient Greece and the Roman Empire. A coin depicting King Ardashir I minted in Hamadan between 233 and 239, shows the founder of the Sassanian dynasty, which ruled Persia from the third to the seventh century, wearing an elaborate jewelled wreath-type diadem. This type of crown was similar to an ornamental headband and was often fastened at the back of the head with a white ribbon to signify the king’s authority and power. Diadems were also worn in Ancient Egypt. These were the simplest crowns that the pharaoh wore when he appeared in public. Often this simple crown was superimposed on other crowns.

In Ancient Greek mythology, Apollo was the god of music, poetry and art, as well as a great warrior and patron of archery. One day, he made fun of how the god of love, Eros, used his bow and arrow. Offended, Eros made two arrows, one of gold and the other of lead. After shooting Apollo with the gold arrow, the god fell passionately in love with the river nymph Daphne. Instead, after Daphne was shot with the lead one, she came to despise Apollo and decided to remain a virgin. Although the nymph spurned all of Apollo’s advances, he continued to pursue her, so Eros decided to help him. Desperate, Daphne called on her father, Peneus, the river god, to help her, which he did, with a heavy heart, by turning her into a laurel tree. Still mad about her, Apollo used his powers of eternal youth and immortality to ensure that Daphne would be evergreen. Every four years, the Pythian Games, forerunners to the Olympic Games, were held in Apollo’s honour and laurel wreaths were placed on the heads of the winning athletes or “laureates”. They would hang them outside their houses to proclaim their victories and this is probably the origin of why we adorn our doors similarly today.

During the Roman Empire, wreath-style crowns were also worn by the emperors. Great poets, musicians and athletes were also honoured with laurel or olive leaf wreath headdresses for their achievements and status. A symbol of rank and valour, victorious generals were given a grass crown on the battlefield as the highest military honour. This was usually awarded by a besieged army to the general who liberated them. The soldiers went to the place where they had been attacked to gather grass, weeds and wildflowers to make their liberator’s wreath. As the Roman Empire declined, it seems the generals spent more time reminiscing about their past victories rather than fighting new battles, which is thought to have prompted the saying, “to rest on one’s laurels.”

In the Christian tradition, the Advent wreath is usually placed on a table rather than the front door. This is because it features four or, in some cases, five candles. Made of evergreens to signify eternal life, the circle of the wreath has no beginning or end and the holly leaves recall Christ’s crown of thorns and the berries, his blood. Four candles are placed around the wreath. The first, second and fourth candles are usually purple in colour and the third is pink, which mirrors the colour of the vestments worn by priests during this period. A candle is lit on each Sunday of the four weeks of Advent, which this year began on Sunday, November 29 and ends on Thursday, December 24. A fifth white candle may be placed in the middle of the wreath representing Christ, the light of the world, which is lit on Christmas Eve. There were many more candles on the first Advent wreath invented in 1860 by Johann Hinrich Wichern, a German protestant minister and a missionary. There was, in fact, one for every day of Advent, but this became impractical and expensive as the tradition spread.

In some places, the four candles stand for hope, peace, joy and love, whilst, in others, the first candle is called “the Prophet”, announcing the coming of Christ; the second, “Bethlehem”, the town of the Messiah’s birth; the third, “the Shepherds”, the first people to see and worship the Baby Jesus, and the fourth, “the Angels”, who spread the news of his birth to the world. No matter which you prefer, both prepare the coming (or advent) of a joyous and happy Christmas.

In keeping with tradition, my Christmas wreath will be taken down on January 6 and put back in its box where it will stay until next year because, as the Italian saying goes, “l’Epifania tutte le feste porta via” (Epiphany carries all the holidays away). 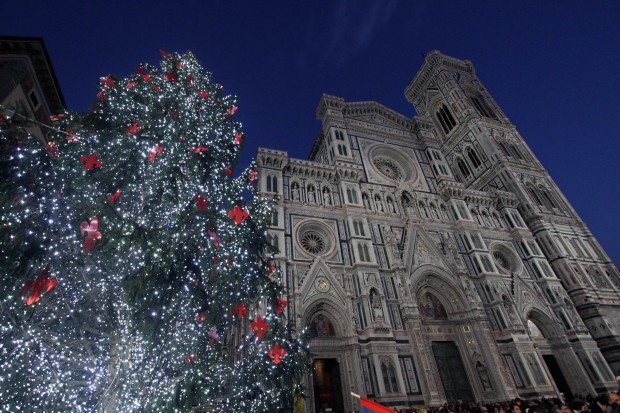 Read more about how the Christmas tree was brought to Florence by an American woman.