The restoration will begin in the spring and will take a year to complete.

Restoration will commence this spring on the Hall of Maps at the Palazzo Vecchio.

The plan is to return the maps and impressive globe to their former glory, in addition to the hall’s furnishings, lighting and technology. Situated at the end of the museum tour, the Hall of Maps is one of the most visited rooms in the Palazzo Vecchio Museum. As a result, the space has suffered considerable wear and tear, especially the uneven flooring. Apart from basic maintenance in the 1950s, the room has never been modernized.

Costing 500,000 euro, the restoration is made possible by the Friends of Florence, a U.S. 501(c)(3) non-profit organization whose aim is to conserve Florence’s rich cultural heritage, as part of the Florence I Care program. The work is expected to take a year to complete, but the room will remain partially open to visitors (pandemic measures dependent). 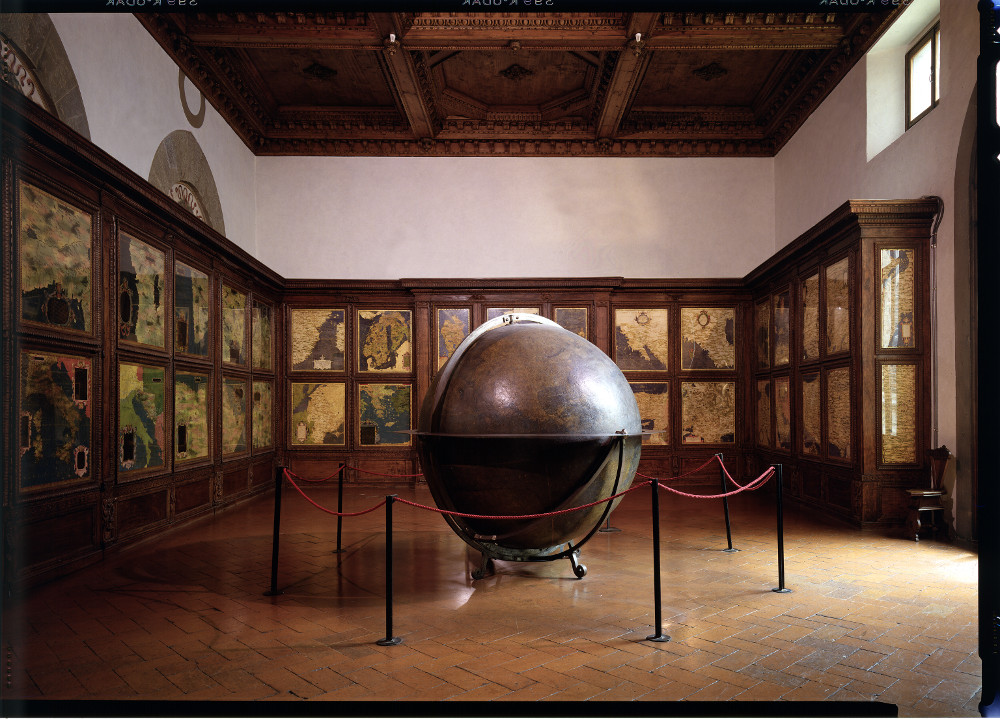 Hall of Maps at the Palazzo Vecchio

“The Hall of Maps is one of the most valuable rooms in the Palazzo Vecchio Museum,” commented Tommaso Sacchi, city councillor for culture and international relations, in a press release. “The magnificent globe in the centre of the room is one of the largest and oldest, and it remains essentially intact today. Now we will look after it thanks to the generosity of Friends of Florence. We will also restore the entire room, from the floor to the ceiling, the cabinets and the walls, on which about fifty oil-painted maps are positioned, depicting the whole world as it was known at Cosimo I’s time.”

“For almost twenty years, Friends of Florence has wanted to restore the Hall of Maps and the Globe, not only for the scientific and artistic importance of the works, but also because the walls in this room in the Palazzo Vecchio conserve the testament of what the world was like during Cosimo I’s lifetime,” explained Simonetta Brandolini d’Adda, president of Friends of Florence. “It’s a fascinating project that is much needed to safeguard such a unique place. We thank the benefactor for their support of this project and of the many projects conducted by Friends of Florence.”

Embellished with gilded inscriptions, refined titles, Medici endeavours and fantastical creatures, the 53 oil-painted maps on the third floor of the Palazzo Vecchio provide a detailed depiction of the seas and lands known during Cosimo I’s time (1519–74). The restoration entails detaching the cartography from the walls and restoring it in the adjacent room, where the “putto” adorning the third-floor Terrazzo di Giunone restored a year ago thanks to Friends of Florence. With a circumference of over two metres, the globe is too big to be moved and will be restored in the hall. 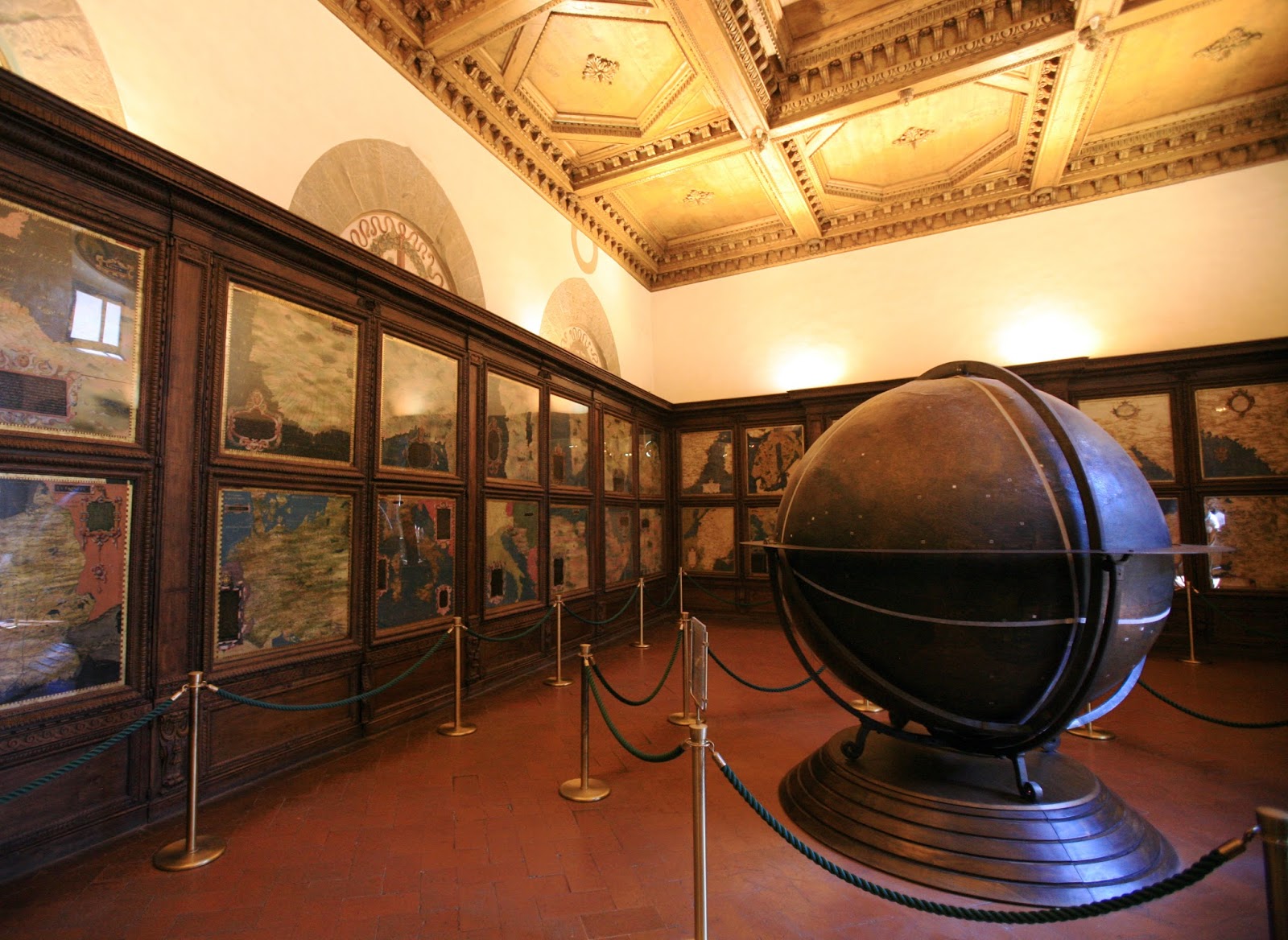 Hall of Maps at the Palazzo Vecchio

The Hall of Maps did not exist prior to Cosimo I de’ Medici’s arrival at the Palazzo Vecchio, as seen in the outline of the windows of the adjacent Cancelleria office, visible on the wall to the left of the entrance. When the Grand Duke moved to the palazzo, the surrounding rooms formed a storeroom for the court’s furniture. The hall was created later by Giorgio Vasari (1561-65), on Cosimo’s request, as both cloakroom and cosmography room. Vasari designed the new hall with the help of cosmographer Fra’ Miniato Pitti, who subsequently relinquished the role to the Perugia-born Dominican friar Egnazio Danti, dismissed in favour of Olivetan monk Stefano Bonsignori. The plans consisted of constellations painted on the ceiling with wooden cabinets affixed to the walls with maps on the doors, and the flora and fauna of each land decorated on the base. In the middle of the hall, the scheme was to have two large globes impressively appear from above as soon as the central panels opened in the ceiling, hanging in mid-air. The idea of showing everything known about the world in the mid-sixteenth century in one room reflected Cosimo’s interest in geography, natural sciences and trade, but the ambitious project was never fully completed. Dionigi di Matteo Nigetti made the walnut cabinetry (1564-71), which contained tapestries and other wall hangings, later silver and gold works, and finally old weapons. Out of the 53 maps, 30 were painted by Egnazio Danti (1564-75) and 23 by Stefano Bonsignori (1575-86). Twenty-seven were based on Ptolemy’s Geographia (2nd century AD), updated according to the era’s cartographers, and the others, including the maps of America, from various sources of the time. Lorenzo della Volpaia’s planetary clock was placed in the middle of the wall opposite the entrance. (In 1510, the clock was moved into the adjacent Sala dei Gigli, but was ruined in the seventeenth century. A modern reconstruction can be found in the Galileo Museum.) Cristofano dell’Altissimo started to paint portraits of illustrious men to adorn the cabinets, copying them from the renowned Giovio Series in Como. By 1570, more than 200 portraits had been completed, arranged in three rows, but a decade later they were moved to the Uffizi, where they remain today.

With a diameter of 220 centimetres, the orb in the centre of the Hall of Maps is the oldest large globe in the world, made at a time when this type of scientific instrument was far from perfected. Earliest documentation about the globe dates to early 1564, when a letter sent to Giovanni Caccini by Giorgio Vasari on January 29 informs us that the latter had shipped the globe by river from Pisa. The terrestrial orb was made by the friar Egnazio Danti, who had previously crafted 30 maps. It’s highly probable that the globe was not originally placed in the Guardaroba, as it was not mentioned in the palazzo’s inventories of 1570 and 1574. The theory is that it was housed firstly in Palazzo Pitti, where the globe appears in a 1587 stocktake. In addition to other scientific apparatus of the Uffizi, in 1775 it was moved to the Old Instruments Museum attached to La Specola. It is likely that the globe made its way to the Palazzo Vecchio’s Hall of Maps as late as 1958.

This article was also published in Issue 274 of The Florentine.