At the Questura: obtaining a biometric residence document for UK nationals

Memories of a visit to the Florence police headquarters in 2002 involve shouting, crying and a muscular guy being manhandled off the premises. Yesterday, calm and the occasional pigeon pervaded at the Questura on a quest to obtain the post-Brexit biometric residence document. 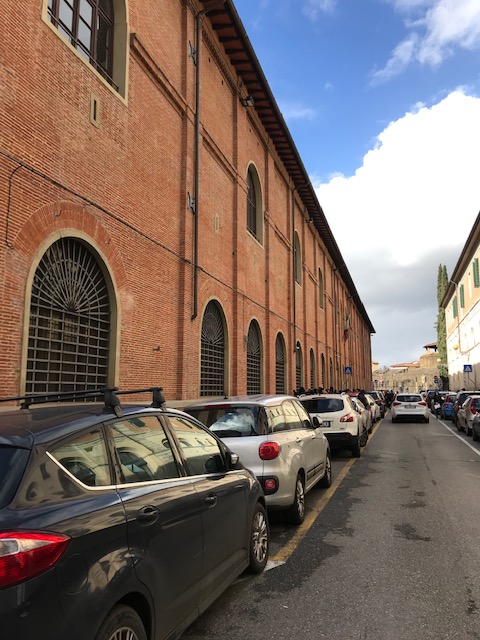 The via della Fortezza immigration office in Florence

My local town hall of Pontassieve proved eminently helpful back in September in issuing the required attestazione di iscrizione anagrafica. An email to the registry office received a next-day response and next-week appointment. A pair of marche da bollo (tax stamps) to the tune of sixteen euro and an employment contract secured a piece of paper, which I proudly displayed on Facebook with the backdrop of the bell tower in a nice touch of campanilismo, local pride. “Helen, that’s not the right document,” replied a friend. How many certificates can there be proving one’s residency? Quite a few, it turns out. This particular one, titled attestazione di soggiorno permanente per Cittadino dell’Unione Europea, apparently wasn’t worth the tax stamps I’d shelled out on.

“Sorry for disturbing you again, but I’m a fool and asked for the wrong piece of paper,” I emailed the official at the Comune. “Can I come back, please, and get it right this time? Apparently, it needs to state: Ai sensi dell’Art. 18.4 dell’Accordo sul recesso del Regno Unito e dell’Irlanda del Nord dall’Unione Europea del decreto legislativo del 6 febbraio 2007, n. 30.” No more than half an hour later, the registrar instructed me to return the following morning. The right document had already been prepared and we had a chat in which I apologized for taking up her time and she showed sympathy for the situation. “Signora, you’ve been a resident here since 2007. You speak Italian fluently, you’re married, you have a job, you contribute to the economy.” To my right, a blonde lady was being escorted into the main council chambers, an Italian citizenship parchment in hand tied with a unifying tricolore ribbon. The registrar nodded in their direction and smiled. “Ha ragione,” I conceded, acknowledging that applying for Italian—hence European—nationality would be the next sensible step. For now, the attestazione di iscrizione anagrafica was pocketed as proof of my rights enshrined by residency in Italy.

In late December with the end of the transition period beckoning, the Italian Home Office issued a useful handbook (or “Vademecum for British citizens and their families residing in Italy”). It announced that “the Withdrawal Agreement provides that UK nationals and their family members have the right to receive a new residence document in electronic format,” which is valid for five or ten years; the latter, referred to as the carta di soggiorno permanente, is available for British citizens who have resided legally and uninterruptedly in Italy for five years. The handbook, which quickly made its rounds among the British contingent, indicated that an appointment could be booked with our provincial Questura.

After sending a certified email on a Friday, the reply came from the Immigration Office in Florence on the Monday morning. I pinched myself. Was I still in Italy? Was there still a pandemic raging? Surely this next working day efficiency from the Florence police headquarters was a blip, but there it was in black and white, plus a list of documents to bring to the appointment in three weeks’ time. Everything was crystal clear: print out the invitation email and show it to the police on arrival; bring four passport photos; your passport and a photocopy; the attestazione di iscrizione anagrafica, any residency certificate (maybe the first one I’d got would have been passable after all) or a self-certification of residency (laughable); and a postal order worth 30.46 euro paid into current account no. 67422402 to “MEF DIP.TO DEL TESORO VERS: DOVUTO RILASCIO CARTA DI SOGGIORNO” – for: “Importo per il rilascio della carta di soggiorno – Accordo di recesso UE/UK”). Following the logical advice of a journalist, I obtained the bollettino at the Sportello Amico in Florence’s main via Pellicceria post office, which is used to dealing with similar permessi di soggiorno requests. The omnipresent marca da bollo di euro 16,00 is being wavered—the immigration office actually sent an email informing me not to bother bringing it.

Things have changed since the filth of the via Zara immigration department in the Noughties. In many ways, the current circumstances of British citizens in Italy have reverted to type. On arriving in Florence in 2002, my employer instructed me to hop over to via Zara to obtain a permesso di soggiorno per cittadino ue (permit to stay for an EU citizen), which at the time seemed absurd, given that one of the fundamental principles of the European Union is to facilitate the free movement of labour. But I was 22 and did as I was told. It was a painless process, although it provided shocking insight into the way in which non-Europeans were treated in their pursuit of a better life. It was a glimpse into the underbelly of Italy, the grim reality that short-term visitors and tourists rarely see. 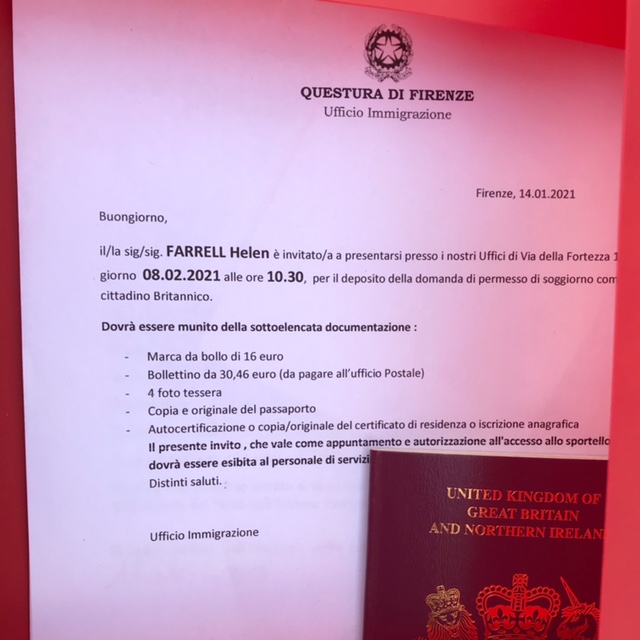 Fast forward to 2021 and the via della Fortezza setup. Abashed by the preferential queue jumping, the policeman on the door was the embodiment of courtesy. Temperatures were checked on arrival and I was handed a number and given instructions on where to wait. “You have B003, so it won’t be long, signora. Prego, prego.” The flooring of the long, white, vaulted corridor is marked with black-and-yellow hazard tape, encouraging a one-way system to guard employees and aspiring immigrants against infection. Brits benefit from a dedicated desk (number 5 or 6) and a time slot that is more or less observed. I even managed to bag a seat with a masked Brazilian family to my left and some equally face-protected elderly Brits from Montaione to my right. The Brits cooed at the baby and the Brazilians patted the Brits’ Lagotto dog: it was all very cordial, notwithstanding the occasional flyby on the part of the Questura’s seemingly resident pigeons. There were no raised voices and no manhandling: just the business of issuing papers.

My number was called after a half-hour wait. The red-haired immigration official smiled and requested the invitational email; a copy of my passport and the original, which she swiftly returned; a photocopy of the residency certificate; four photos; and the postal order. The fingerprinting felt like a geological detachment from the nation of my birth, another crack in the fault between the UK and Europe, with lots of upping and downing on a mini scanner (take your own hand sanitizer; there wasn’t any available). The entire proceedings took no more than ten minutes and the officer insisted on communicating in good English, despite my responses in Italian. The aim was to make Brits feel at ease and wasn’t in any way condescending; the smiles were genuine and the message was clear: you are still welcome here. I jotted down my phone number and email address, and signed two documents, although I queried the part that stated I was single. (Marital status has no bearing on your right to request the document.) “I’m actually married.” The officer replied, “I can change it later.” She looked at me and cracked a grin. “If you want.” Had I wanted an annulment, it would have been the speediest double red-tape procedure in Italian administrative history. A thin slip of paper was handed over, plus the information that I’d be contacted when the biometric card was ready. Nobody seems to know when that might be. One thing’s for certain: my quest at the Questura isn’t over yet.

Throughout these entire proceedings, the 38,000-strong Facebook group UK Citizens’ rights in Italy – Beyond Brexit is working tirelessly to keep Brits informed and answer questions as we share our experiences and concerns. The group works closely with British in Italy and British in Europe, which is the largest coalition of British citizens living and working in Europe. The British Embassy in Rome continues to update its Living in Italy webpage in addition to holding live Q&A sessions on Facebook and YouTube. Another useful contact is IOM Migration, the International Organization for Migration, which assists UK nationals in obtaining residency in Italy.