A couple people seem to be reticent about the term ‘study,’ but is there a way to be in the undercommons that isn’t intellectual? Is there a way of being intellectual that isn’t social? … I think we were committed to the idea that study is what you do with other people. It’s talking and walking around with other people, working, dancing, suffering, some irreducible convergence of all three, held under the name of speculative practice.

Tethered to socially oriented work, we frequently encounter the notion of holding space and, with it, the importance of having access to sites where activity is not prescribed and output is not required. At times, this is understood in relation to physical spaces we can share; yet in others, it can be a meta-social wavelength that provides openings and slippages where we may come together. The theme of the recently concluded sixth edition of Black History Month Florence was ostinato. Responding to the fact that, while giving space, much like the fraught notion of giving voice, is not the chosen conceptual frame, there is a crucial need nonetheless for a baseline, foundational work and consistent advocacy, upon which, and over which, any, and all, can add their voices.

The book The Undercommons (recently translated into Italian through a collective study that is akin to that described by the book itself) unveils a profound questioning of all that we call research and a problematizing of practices pertaining to this term that preordained or academically accepted. This article is the fruit of collective writing.

The second edition of the YGBI Research Residency hosted this year by Numeroventi, with the mentorship of Arlette-Louise Ndakoze of SAVVY Contemporary, was a coming together designed as a form of exchange that does not necessitate an audience and perhaps is, in fact, hindered by the performativity that such a presence would signify. Four artists, Silvia Rosi, Adji Dieye, Kelly Costigliolo and Christian Offman shared the space for ten days, immersed in a Florence whose relationship to contemporary culture is laid bare by a year’s struggle with the Covid pandemic, yet fortified by the network and bassline sustained, or perhaps more appropriately reverberated, through BHMF’s network. These four voices (or voicings) are seen as opportunities for new perspectives and approaches to thinking about the work to be done in this space and beyond. The writing of these young and gifted artists is additionally understood as a series of potential phrasings, tones and rhythms that enrich, punctuate and transform an ongoing search for language designed not for comprehension, but instead for obstinate resonance. 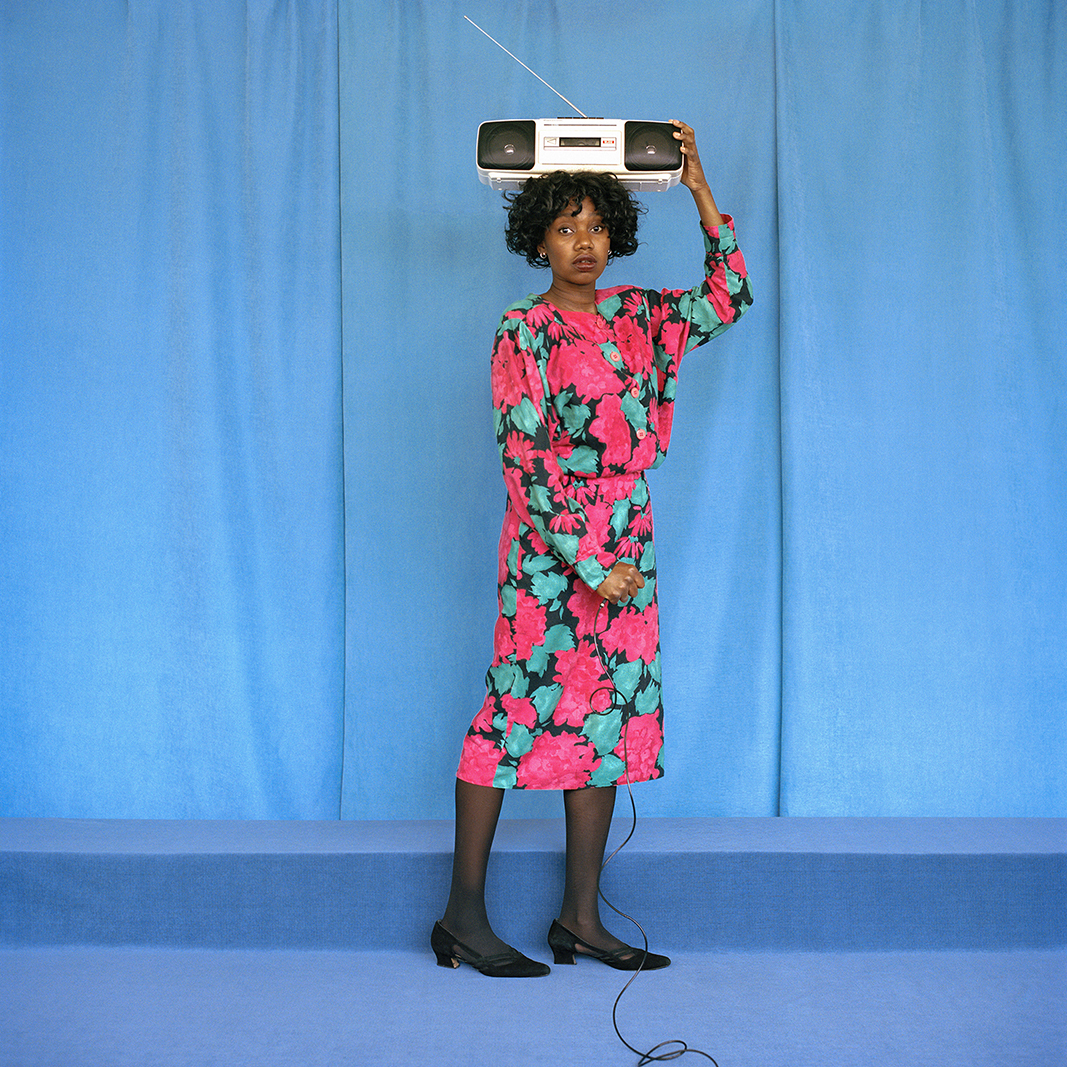 Self-portrait as my mother_encounter, 2019. Courtesy of the artist.

Silvia Rosi’s Encounter is a fictional representation of her family album, exploring tales of migration and diaspora through self-portraiture, performance and symbolism. Inspired by an image from her own family album of her young mother as a market trader in Lomé, Togo, Rosi retraced her parents’ journey of migration from Togo to Italy. This is a story that is deeply personal and, at the same time, universal. With her mother as source and muse, Rosi performs her family narrative recreating both visual and oral histories through the combination of photography, text and video. She references the aesthetics of West African studio portraits through the use of backdrops and props. The act of head carrying, a skill traditionally passed on from mother to daughter, is central to the work, learned and performed by Rosi in an attempt to regain a tradition that has been lost through migration and her position as a European. Encounter is a homage to the family album, an object that is in constant transformation and re-contextualization through the passage of time and the progression of relationships. 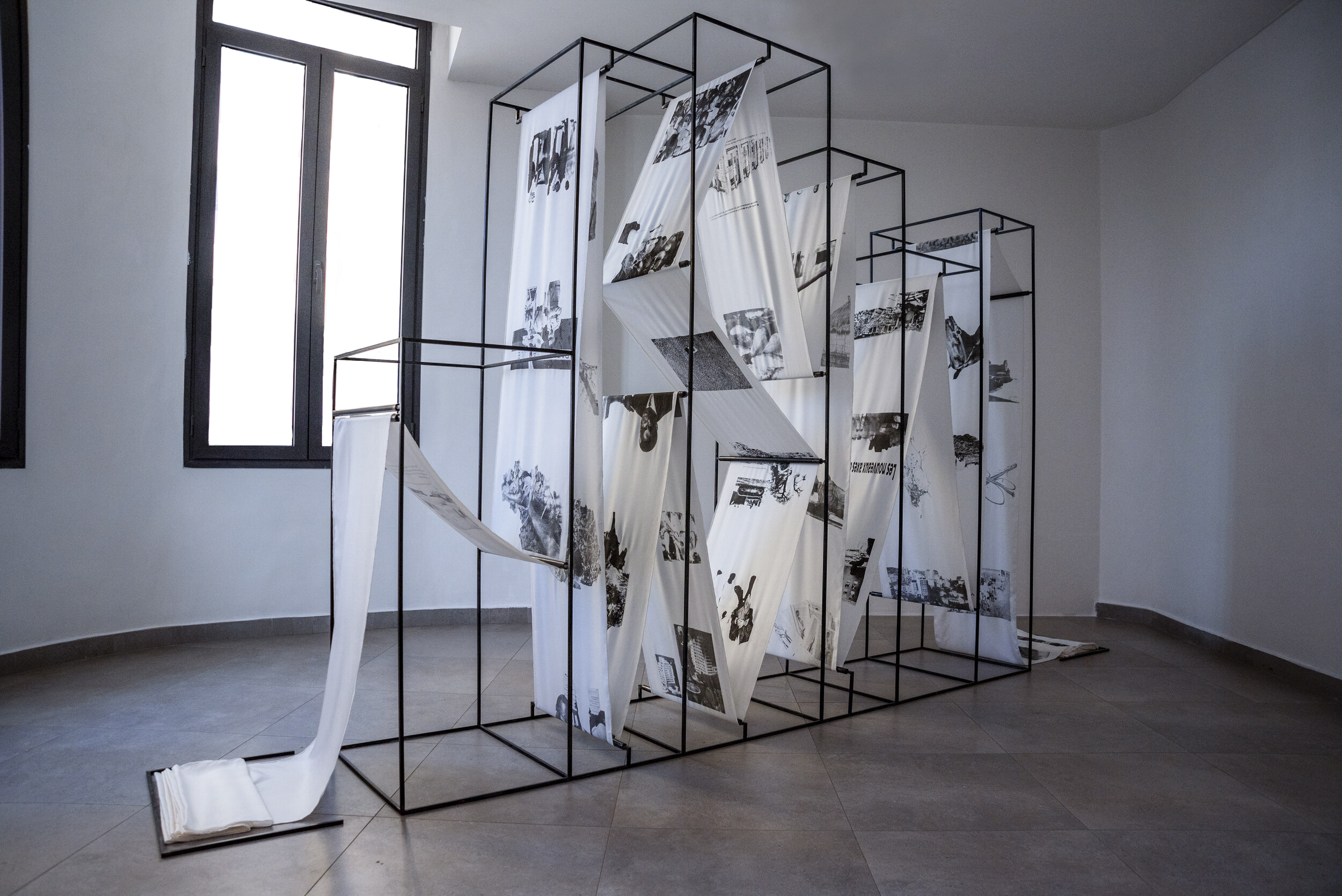 Adji Dieye focuses on notions of representation and identity in relation to formerly colonized hemispheres. They become tools in an inquiry into the socio-political structures that shape our world in the globalized era. Through an observation of the role of culture in advertisements, public monuments and national archives, the artist questions the modes of aesthetic self-determination within these postcolonial spaces. As Felwin Saar says in Afrotopia, “culture has an impact on perceptions, attitudes, consumer habits, investments and savings, individual and collective choices; it remains the principal economic act.” In this sense, Dieye questions the underlying neoliberal colonialist environment from which deceptive forms of self-determination can arise. This is also an attempt to understand how imaginaries manifested in public spaces inform the establishment of social relationships and the understanding of identities. To use photography is to employ a medium that, given its historical role, allows her to question the beliefs behind representational “knowledge” and the different processes of othering it enacts in Western and non-Western societies. 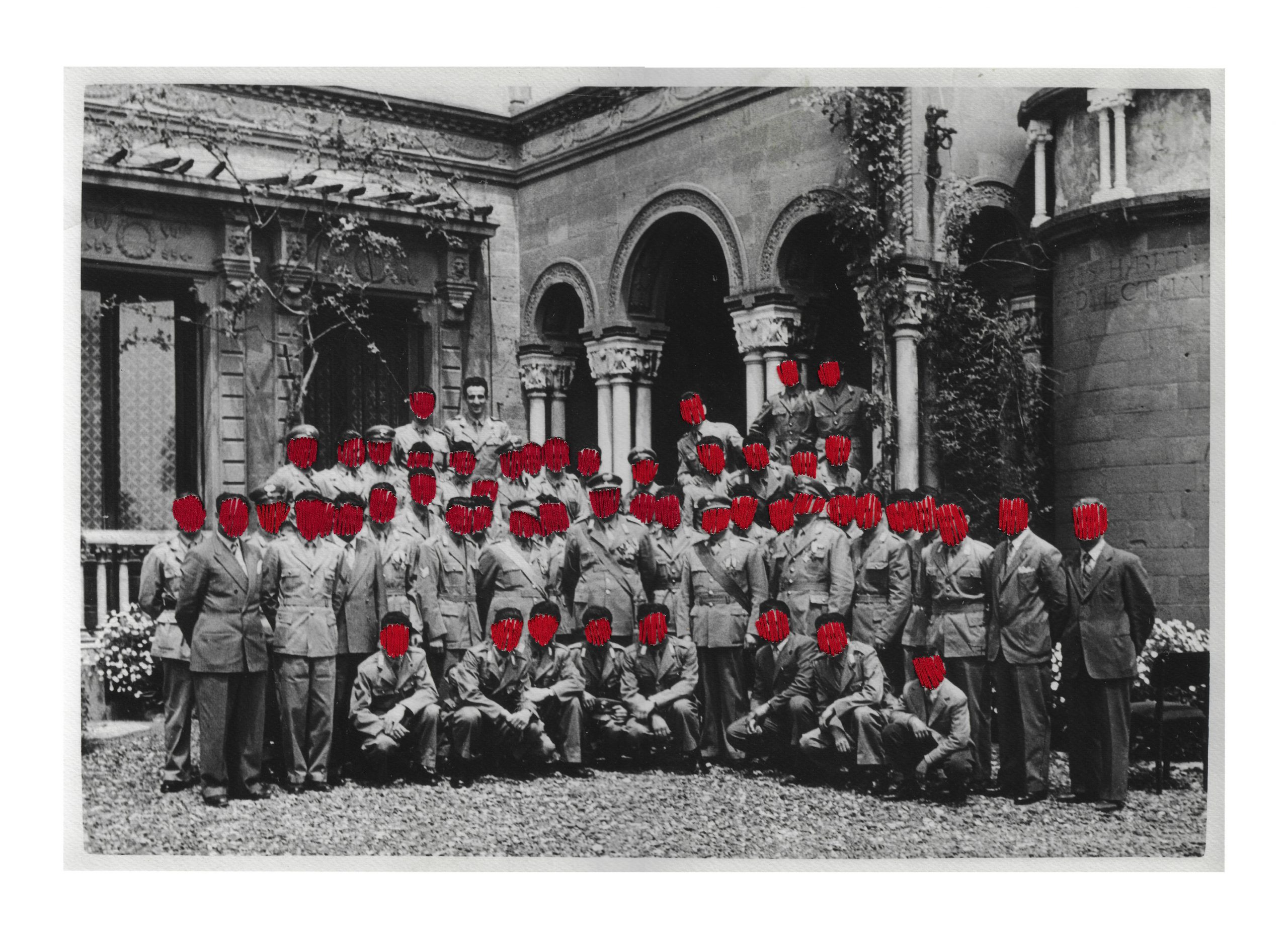 The work of Kelly Costigliolo is immersed in the concept of memory and time, as evident in her biographical project Fu mio padre, a loving portrait of her father who passed away two years ago at the age of 97 and a tribute to his adventurous life as a veteran of the Russian Campaign during World War II. Costigliolo’s process involved the collection of small personal objects, archives and images that symbolize his essence and speak to his anecdotes. The stories lived by her father shine light on the kaleidoscopic fragments of each individual existence, the footprints of our passage, which become necessary instruments to allow the narration to expand from the personal realm and be universally shared. The works are an effort to battle oblivion and protect the petite mémoire, to quote French artist Christian Boltanski, in relation to how the smallest things, often the ones we care for the most, are also the easiest to be forgotten. The last work in the project is a cotton print of a 1941 photograph portraying the 237th section of the Carabinieri (a unit of the Italian Army) in Bologna, minutes before leaving for the Russian Campaign. Red thread is sewn into the print obscuring the faces of the soldiers, leaving only Costigliolo’s father’s uncovered. It is a reflection on all those who never returned, or those who changed their names and lives to remain in Russia. 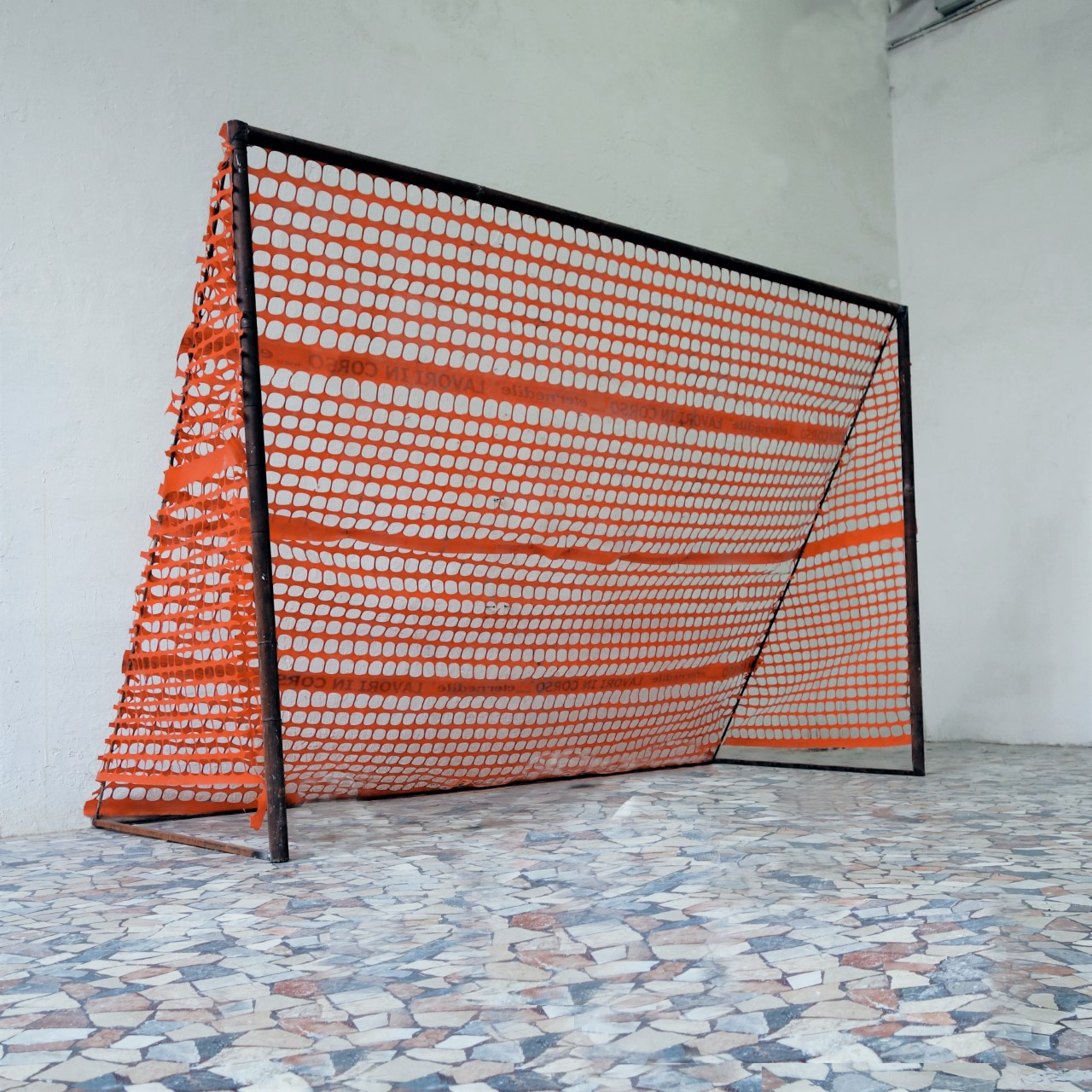 Christian Offman’s works often take the form of sculpture and installation with a dimensionality that is enhanced by layers of racialized, socialized and personal memory. Raised between Rwanda and Lombardy, the sum of these two cultural realms have led to a practice that reflects the aesthetics and consciousness of both. Identity, memory and historical repression drive the work’s contradictions and ideological flaws that demarcate a postcolonial present. Geography in Offman’s work is understood not as a space of infinite possibilities, but rather a series of boundaries and obstacles. Like many born of diaspora, perceptual placement and positionality are in limbo between legal prescriptions of “citizenship” and social markers of who is considered “foreign”. A healthy, motivating uncertainty guided by this reality has shaped the form and content of his work, which, while not expressly political, is attuned to the notion of the personal as political. Baustelle is the reflection of experiences from the artist’s childhood in Rwanda. A red clay soccer field with balls constructed from simple plastic bags and large net-less goals. While the sport itself is generative of a shared realm between Rwanda and Italy, the goal represents an acutely distant space-time that is no longer existent, like a postcard from a distant place visited long ago. The work simultaneously draws upon the artist’s experience in Bergamo where children of a certain mentality dubbed the artist with names of famous black players. 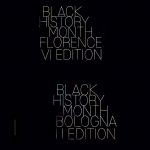 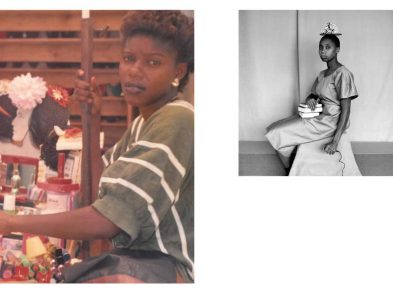 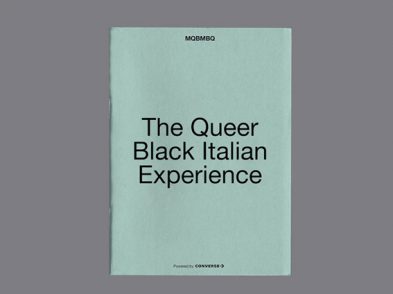