Is it possible to have affection for a certain plant or its fruit? It might sound funny, but I have especially poignant memories when it comes to lemons. I grew up in California, playing on the grass under a tree with the most fragrant lemons. Lemonade was a daily part of my summer life.

My appreciation was brought to a new level when I visited Sorrento for the first time and saw and smelled those large nippled beauties hanging from the trees. My first lemon epiphany occurred when I was offered a scoop of lemon sorbet in half a hollowed-out lemon.

A few years later, while working on my Pizza Napoletana book, I had an extended stay in Napoli. I always traveled with my two-year-old and Gioia, a young friend who came along to help while I was working. One night, after dinner, we were relaxing with some limoncello while my daughter danced and spun around the empty room we were served in. Suddenly, I noticed she kept going up to Gioia and asking for “more, more!” and I realized that, unaware of the high alcohol level, she was sharing the limoncello with my little kiddie. She was soon dancing on the tabletops (my daughter, not Gioia!). 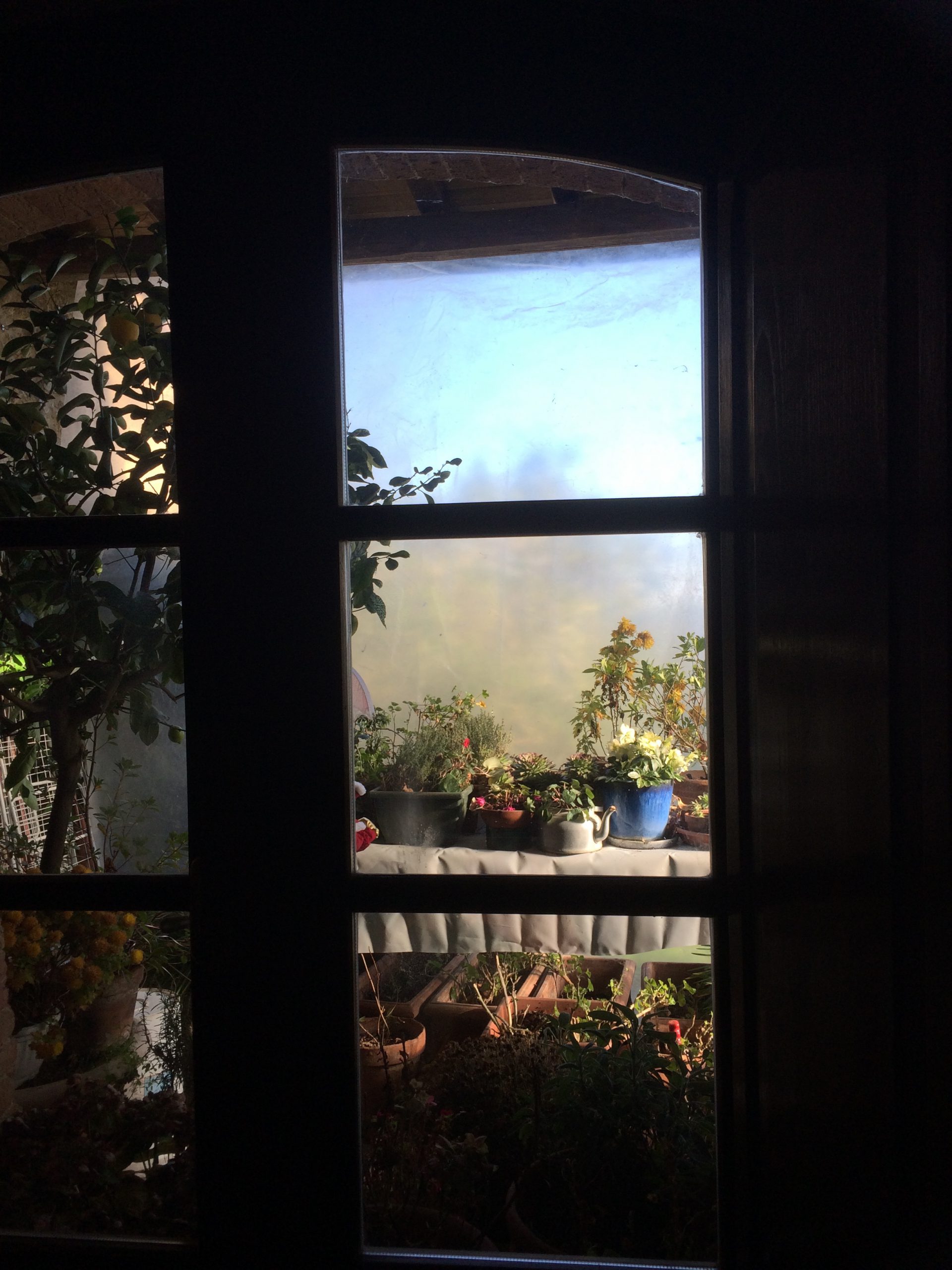 A view into the author’s winter garden

Fast forwarding to 2001, we moved to Poggio Etrusco, our farm near Montepulciano. The previous owner was from Amalfi and had brought with her a small lemon tree in a pot. After a number of years of living here, I suppose it had grown too much to move it and she was going back to Amalfi anyway.

Unlike Italy’s coastal areas, Tuscany’s winters are much too cold to plant citrus in the ground, so everyone brings the pots into a winter hothouse (called a serra). Noble families with many lemon trees in large terracotta pots built a limonaia, much like the orangerie in France. I built a small temporary room off the side of my living room, with a window to watch my cyclamen and geraniums blooming. This brings me so much joy in the winter, a tiny garden to tend and occasionally some lettuce and herbs to bring to the kitchen. This year was a bumper crop of lemons, so there was really just one thing to do.

When life gives you lemons, you make limoncello. And then, with the rest of the pith and pulp, you make lemon marmalade, such as this recipe by Letizia Mattiacci. 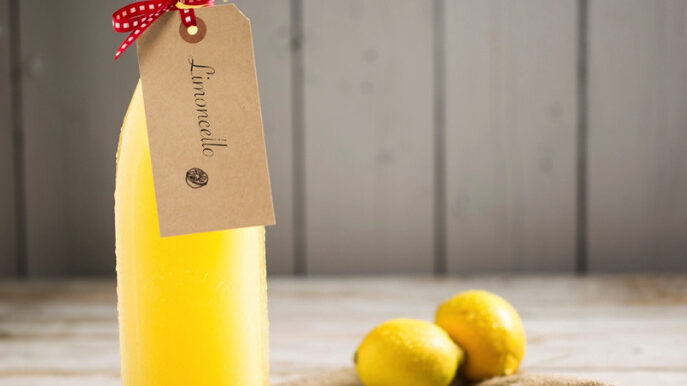 It’s simple. You need three ingredients: lemon peel, alcohol and sugar (and water, too). There are many recipes for this lemon liqueur as there are kitchens, but most are very similar. The differences are between the lemon varieties and the length of time the peel is left to macerate.

The most famous lemons for Limoncello are the Sorrento Lemon IGP (protected geographical indication since 2000). My little tree is not the same as the Lemon of Sorrento; it is most likely Sfusato Amalfitano, and is also very aromatic. You can use your local lemon, but Meyer lemons, a hybrid cross between citron and mandarins, don’t seem to have enough acidity.

In Sorrento, the peel is usually left to macerate in alcohol for a month, then the simple syrup (sugar/water) is added and left to stand another month or so. Essential oils in the peel infuse the liquid with color and flavor. Interestingly, my friend Daniella Guagliardo in Monterosso al Mare, an expert in making liqueurs, says that the aroma and flavor are already extracted in a week to 10 days. In fact, in Liguria the total time is traditionally about a month. By the way, in Liguria, it is called Limoncino and is made with delicate aromatic Femminello lemons. Daniella uses some lemons that are still a bit green, and sometimes adds a lemon leaf to the steeping process.

In both cases, once the peel has done its job (it will be brittle), it is strained out and tossed, and the liqueur is bottled. 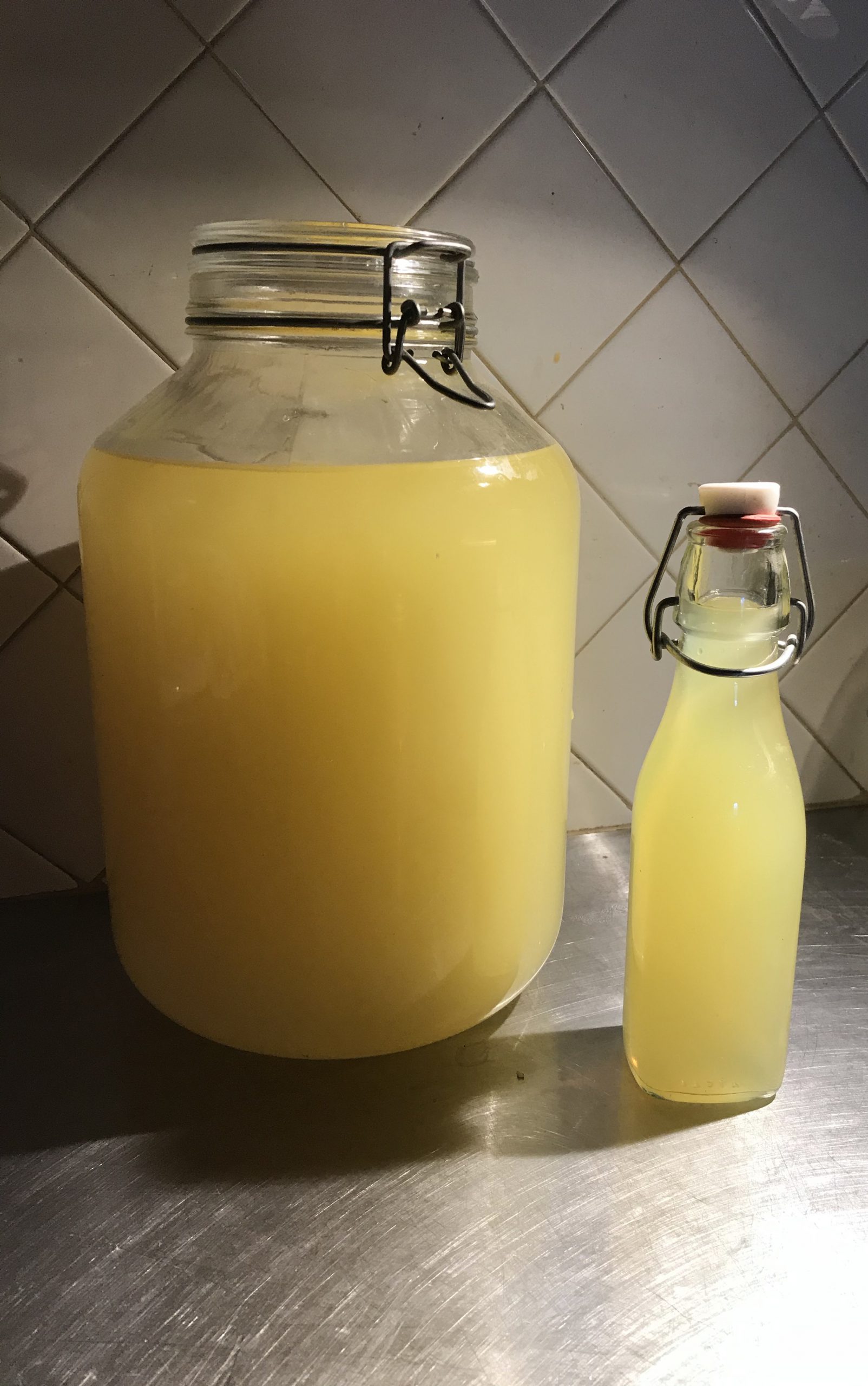 The tradition of this liqueur is to sip it, chilled, at the end of a meal as a digestive. I sometimes serve it as an aperitivo with Prosecco as a type of spritz.

With an old-fashioned vegetable peeler, remove the yellow part of the lemon in strips (very little white pith, please). Place the peel in a 1-gallon glass or non-reactive container and let stand for 2-4 weeks (the color intensifies with more time).

Once infused, I strain out the peel and toss it. Some people leave it in for the next step:

Mix equal parts of water and sugar in a saucepan and heat, stirring, until dissolved. Let cool completely for a clear finish (or, as I do, let cool almost completely for a cloudy finish), then add it to the alcohol, bottle, and chill. 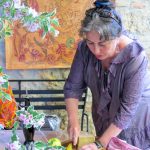 Pamela Sheldon Johns is an award-winning cookbook author. She runs the Agriturismo Poggio Etrusco, a bed and breakfast and organic farm near Montepulciano, where she holds food and wine workshops. www.Poggio-Etrusco.com