The conservation and restoration of the Archangel Raffaele e Tobiolo, which Giovanni Baratta sculpted between 1696 and 1698, has proven a months-long labour of love for the Mircea Maria Gerard Foundation and an international team of women restorers. 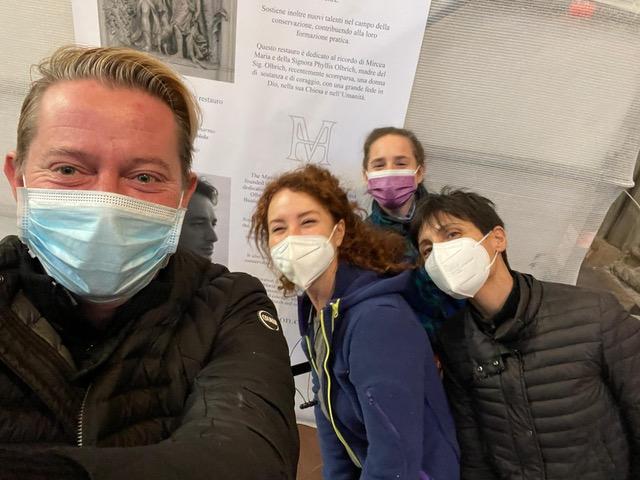 Luke Olbrich and the restoration team

Luke Olbrich founded the Mircea Maria Gerard Foundation in 2016, in loving memory of his Belgian art restorer husband, who was working on the restoration of the Putto with Dolphin in bronze copy by Andrea del Verrocchio when he passed away. The foundation’s first project was to complete that restoration before signing a two-year agreement with the Comune to ensure maintenance of the fountain in the Michelozzo courtyard at the Palazzo Vecchio. Since then, Olbrich’s partnership with the non-profit Bastioni Association has gone on to restore the 1613 panel painting, The Death of St. Albert by Bernardino Monaldi and Francesco Gambacciani’s 1782 Natività, both in the church of Santa Maria del Carmine.

“We have completed four out of five major projects,” explains Luke Olbrich, founder of the Mircea Maria Gerard Foundation. “Our aim is to support young talent so that emerging restorers can study and work at the Bastioni studio in San Niccolò.” 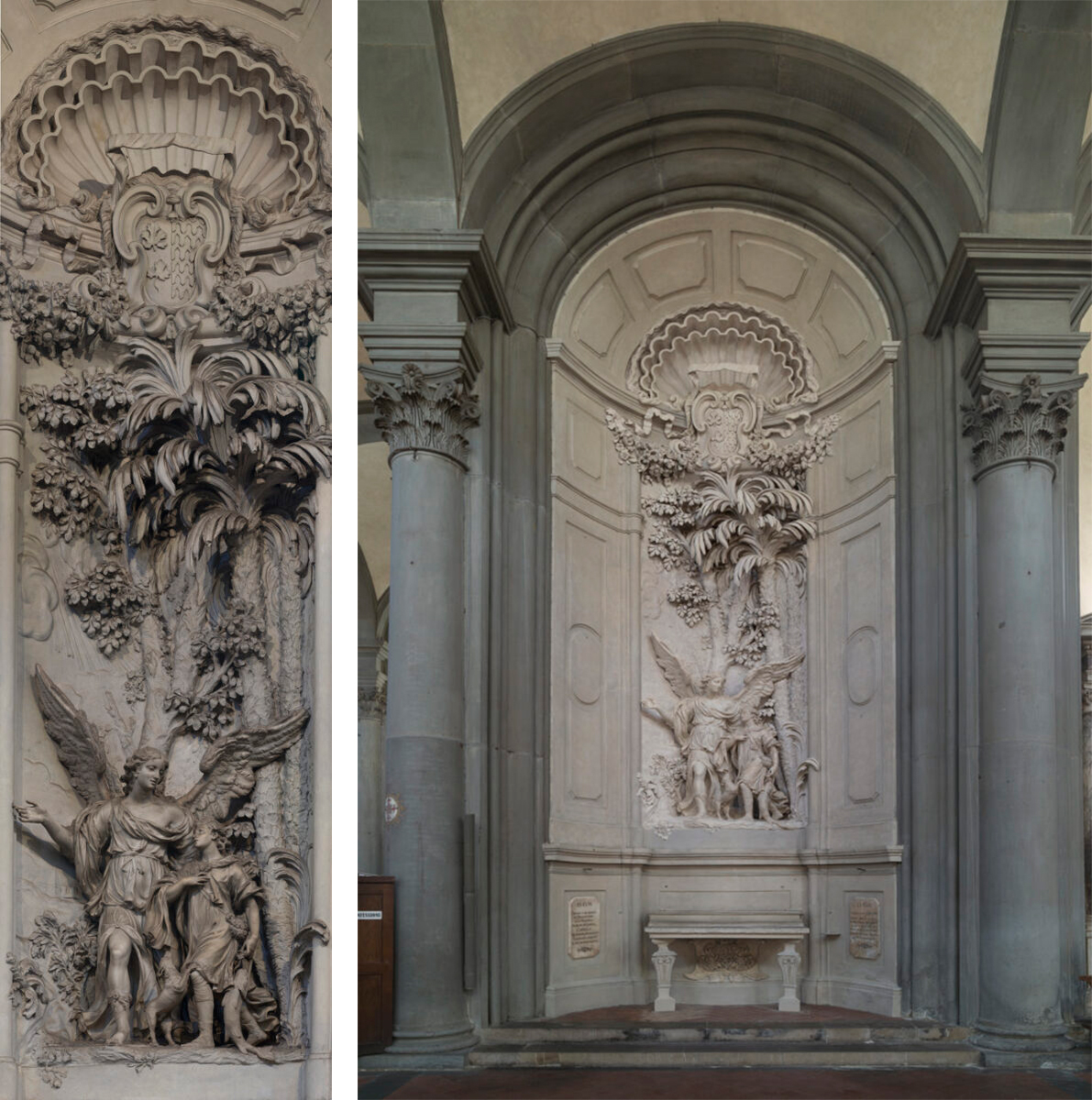 Before and after the restoration: Giovanni Baratta’s Archangel Raffaele e Tobiolo in the Basilica of Santo Spirito

This approach is something that is appreciated by experienced and emerging restorers alike, as Chiara Piani, lead restorer on the Archangel Raffaele e Tobiolo project, explains. “This type of gesture sparks an incredible network of opportunities for restorers, the artworks and the ensuing bonds that develop. A 50-year-old restorer such as myself works alongside young restorers in their twenties who are beginning their careers. It’s an exchange of knowledge, but also an exchange of values.”

The artworks that undergo restoration are selected by the foundation’s trustees. “We received 13 or 14 different proposals last year and narrowed them down to two projects for 2020 based on their importance for the Florentine cultural environment,” says Olbrich. “We work with the art restoration community to allow them to choose their projects, the ones they feel are important.”

The restoration of the Archangel Raffaele e Tobiolo in the main nave of the Basilica of Santo Spirito commenced in December 2020 and was finished in March 2021. The stucco and marble sculpture offered unique challenges due to its sheer size and height, measuring 15 by 4 square metres. “When we put up the scaffolding, we realized that the sculpture had been repainted, so we were obliged to change our approach with a highly selective cleaning. We reconstructed certain parts and consolidated others,” Piani clarifies.

The project continued during lockdown, which provided a singular experience in itself. “We were alone in the church,” continues Chiara. “It was magical. Padre Giuseppe would come and talk with us. It was deeply emotional when we took down the scaffolding and saw the finished restoration in all its glory.” 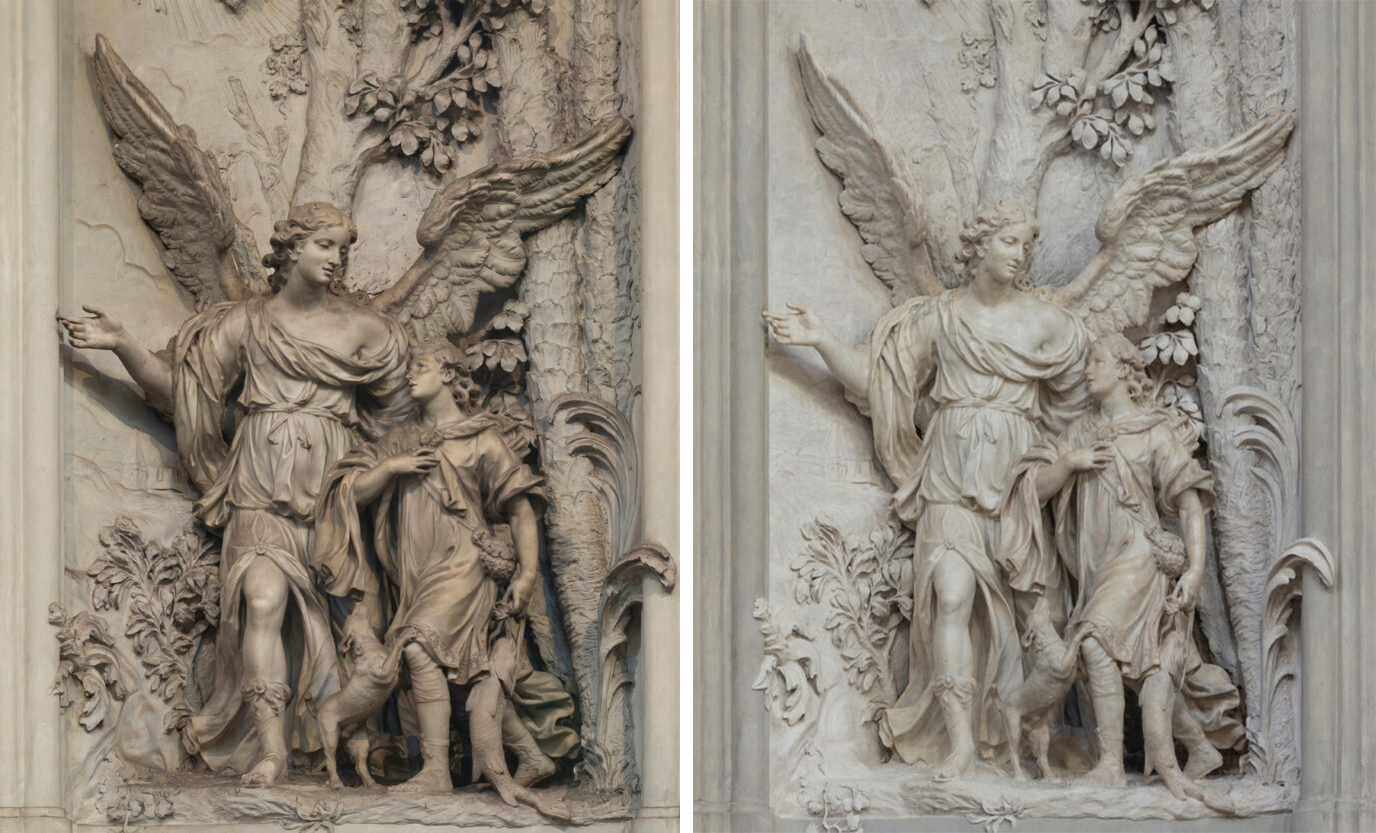 Before and after the restoration: Giovanni Baratta’s Archangel Raffaele e Tobiolo in the Basilica of Santo Spirito

How did it feel to work in such a hallowed place like Santo Spirito, I asked Irene Segrera, the younger team member alongside her fellow Spanish colleague, Ana Gomez. “It was a wonderful experience for me as it was the first time I’d worked on a marble and stucco sculpture like this. Before this, I’d only worked on paintings. I’m so grateful to Chiara for sharing her knowledge and experience. It was amazing but tiring [laughs], given that the sculpture’s so enormous and its three-dimensionality. There were moments when I thought we’d finished and then I’d move and see a corner we’d missed!”

The foundation has another restoration in the works, which is revealing intriguing details, such as hay and iron elements: Giambologna’s Porta del Soccorso in the Basilica of Santissima Annunziata. That’s not all as Luke is considering the next stage in the charitable association’s future. “We’ll be focusing on providing training on how to develop your career as an art restorer.”