The David’s “twin” was conceived via a complex digitalization process that involved roughly 40 hours of scanning Michelangelo’s original in the Galleria dell’Accademia.

The most accurate reproduction ever of Michelangelo’s David is set to represent Italy at the Expo 2020 Dubai, which has been rescheduled due to the pandemic.

For Nicola Salvioli by Marco Borrelli

The David’s “twin”, as the copy has been dubbed, was conceived via a complex digitalization process that involved roughly 40 hours of scanning Michelangelo’s original in the Galleria dell’Accademia. Every second, the scanning instruments took measurements of up to 156,000 points on the statue’s surface. The scans were then combined with algorithms to produce a three-dimensional digital model with a resolution of 146 thousandths of a millimetre.

The creation of the David copy is the result of a months-long process. The digitalization stage was managed by the civic and environmental engineering department at the University of Florence, in collaboration with the Italian division of Swedish technology company Hexagon AB. Ferrarelle provided the material to create part of Michelangelo’s sculpture, obtained by recycling bottles recovered from the environment, transforming waste into a resource. 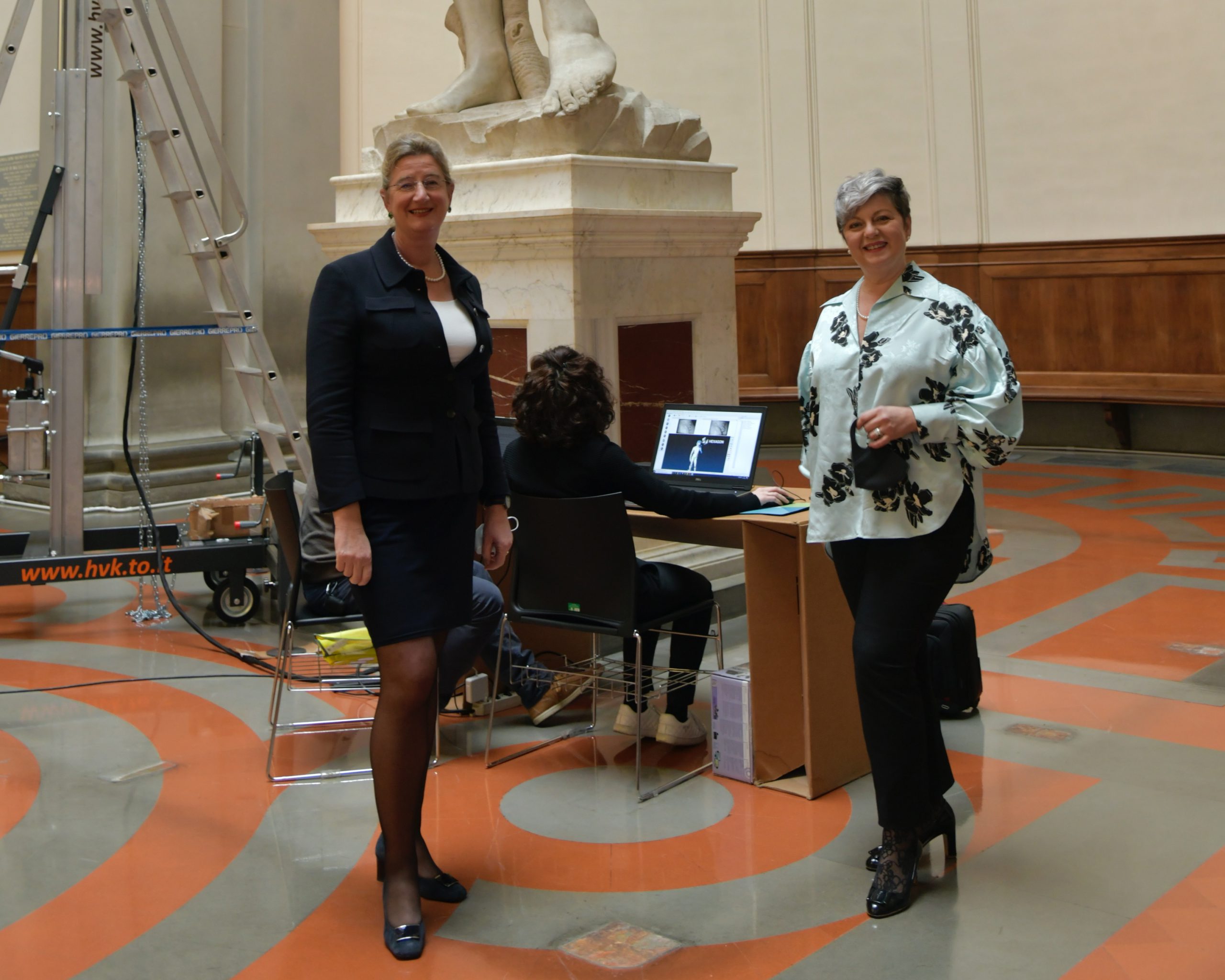 “I wanted to combine the historic and the contemporary, tradition and innovation, art and science, in union with the extraordinary,” said Professor Grazia Tucci of the University of Florence, who led the reproduction project of Michelangelo’s masterpiece alongside representatives of the Hexagon companies. “We used 3D printing to reproduce a literally colossal masterpiece of Renaissance art. Michelangelo carved a block of marble and my aim was to reproduce those shapes through the progressive superimposition of thin layers of material: the technology of the future…Careful research was conducted to find a latest generation printer that would allow large print sizes and speeds: thin layers of a gel that solidify with UV light, 14 pieces in 160 hours of printing.”

The final touches were added by Nicola Salvioli in his borgo degli Albizi studio, giving the material the appearance of the passage of time by using resin and Carrara marble powder. “I’m honoured to have been involved in assembling and dressing it. The interesting thing is that it’s not just a copy, it’s a document. We tried to reproduce the colours and the state of conservation of the original.” 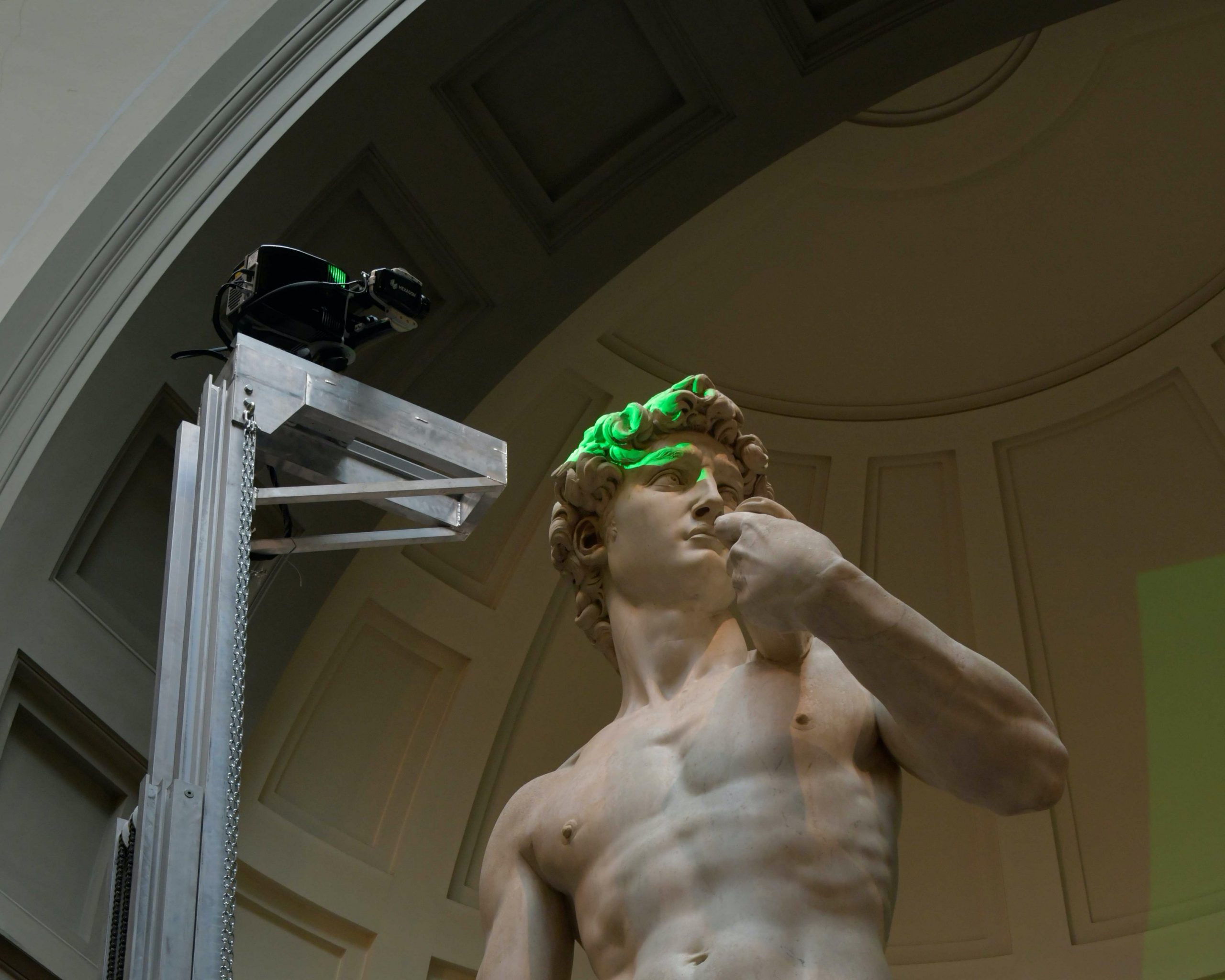 Director of the Accademia, Cecilie Hollberg, hailed the initiative as “a vital step forward, whether for future studies or research, for simulations or conservation. The original David will remain here, in this museum, but we are delighted to be able to send Dubai its ‘twin’ as a messenger of beauty and a symbol of Italy.” Adding to the impact is the David’s world-renowned fame, as Hollberg underlined: “Representing the ultimate vision of ideal beauty and synonymous with the Renaissance, he’s an ambassador for Italy and a symbol of strength as well as hope for the future.”

The creation was placed in a cradle and sent to Dubai on April 19, where it was unveiled on April 27 in the Italy Pavilion, in the Teatro della Memoria (Theatre of Memory), where the clone will be admired by millions of people.

Originally scheduled for October 2020, the Dubai Expo saw its dates pushed back to October 1, 2021 – March 31, 2022 due to the pandemic. For publicity and branding reasons, the event will keep its original name. The Italy Pavilion was designed by Italo Rota, Carlo Ratti, Matteo Gatto and F&M Ingegneria, while Davide Rampello is the artistic curator. The exterior is covered by three inverted hulls that form a tricolour, which is the largest in Italy’s history. It was presented for the first time in Dubai attended by the Italian minister of foreign affairs, Luigi Di Maio, and the commissioner for Italy’s participation at the Dubai Expo, Paolo Glisenti, the pavilion’s designers Carlo Ratti and Italo Rota, and its artistic director Davide Rampello. The event was televised live on RAI1 in a special on TG1/Unomattina, including two videos of the making of David’s “twin” and the Italian Pavilion, with Florence Mayor Dario Nardella and councillor for culture and international relations Tommaso Sacchi involved in the unveiling ceremony.

For Nicola Salvioli by Marco Borrelli

The project is promoted by the Commission for Italy’s Participation at Expo 2020 Dubai, by the Galleria dell’Accademia in Florence and the Italian Ministry for Culture, in partnership with the University of Florence.

The most accurate reproduction of Michelangelo’s David ever made is an achievement from scientific, industrial and restoration perspectives, but also in terms of resilience and determination as the work was carried out throughout the Covid-19 crisis. Professor Grazia Tucci commented, “This project helps to spread knowledge and disseminate the various Italian professionals and skills in this particular area of cultural heritage, from digitalization to reproduction, and the role of Italy in the field of training where the approach to cultural heritage is always multidisciplinary. As the slogan of this pavilion says: beauty connects people.”