The Earth Laughs in Flowers

It was Christmas Day of 1832 when Bostonian clergyman Ralph Waldo Emerson, aged 29, set sail to Europe. He toured the continent, spending six months in Rome, Florence and Venice, before heading for Switzerland and Paris, where a visit to the Jardin des Plantes is said to have changed his life. From that moment on, he switched his focus from theology to the interconnectedness of nature and science. The time he spent in Florence also left a lasting impression, of course. In his 1856 text, English Traits, Emerson briefly describes meeting the American sculptor Horatio Greenough and English writer Walter Savage Landor one May day in 1833 in the hills of Fiesole: “He praised the beautiful cyclamen which grows all about Florence; he admired Washington; talked of Wordsworth, Byron, Massinger, Beaumont and Fletcher.” On seeing this month’s cover of The Florentine, Emerson’s much-quoted line from his 1846 poem ‘Hamatreya’ sprung to mind, a commentary on the human-nature relationship: “Earth laughs in flowers…” 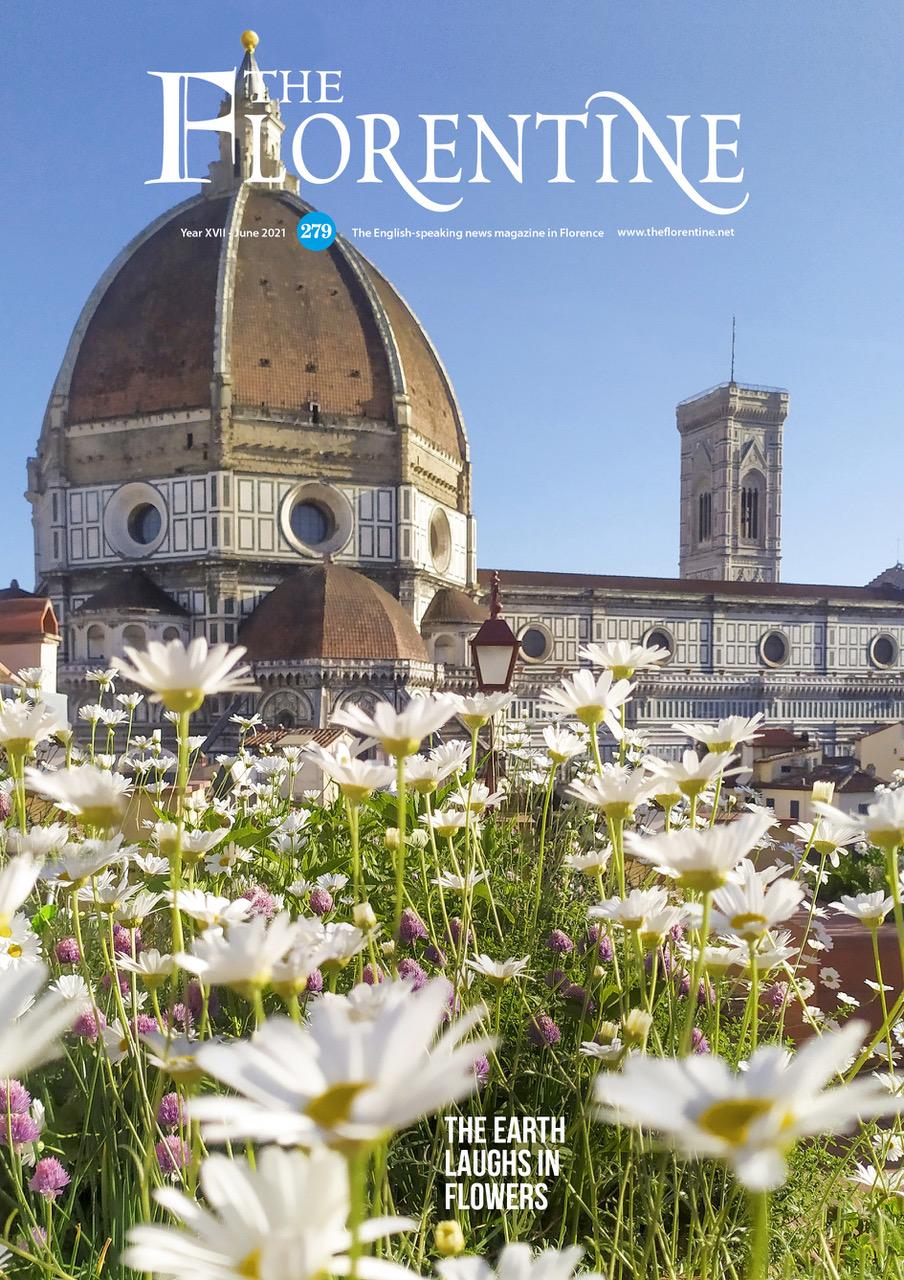 Buy the June Issue of The Florentine.

It’s with a similar carefree but considerate spirit that we bring you this month’s issue as life resumes in Florence. Foreign voices have returned to our streets (mostly French, German and British, with the occasional American thanks to Covid-tested flights), museums and exhibitions are open (including the deep and meaningful American Art 1961-2001 show at Palazzo Strozzi and the impactful Simone Forti exhibition at Prato’s Luigi Pecci Centre for Contemporary Art), and restaurants are making the most of the free concession of public land to sit patrons riverside and in the most panoramic of places.

At the end of the month (June 28-July 2), Pitti Immagine will bring the fashion industry back to our piazzas for the first in-person trade fair in 2021. To mark the occasion, with the help of our friends over at Creative People in Florence, we reached out to Florence’s independent fashion designers and jewellery artisans, which culminated in The Florentine’s inaugural fashion shoot (see pages 14-15). Everyone involved had the loveliest of afternoons on location in the whimsical Serre Torrigiani gardens (now the Serre Bistrot for the summer). The experience ended up being my first ever modelling gig—believe me, it’s not as easy as it might seem!

June celebrates diversity as Pride Month takes centre stage at a time when civil liberties are being hotly discussed across the country. Vincenzo D’Angelo explains the Zan bill and what the proposed law means for the LGBTQI+ community as Arcigay Firenze gears up to open its new headquarters in the Novoli area of Florence on June 4 (pages 6-7).

Editing a magazine is 50 per cent planning and 50 per cent “come what may”. This month’s serendipity has bestowed music on our pages: a behind-the-scenes look at the Maggio Musicale Fiorentino (pages 22-23); an interview with Siena-based Irish folk band, Willos’ (page 18); a preview of the prestigious Argiano Baroque Music Festival in Montalcino this summer (page 19); and a chat with North Africa-inspired group Fanfara Station (page 20).

If you’re craving a change of scene, we provide a few enticing suggestions that range from day trips on a Vespa (page 26) to a weekend break on Elba (pages 28-29) and sustainable experiences in Tuscany (page 12). There’s still a world out there worth discovering, of course, and Deirdre Pirro describes it to us through the sixteenth-century voyages of Antonio and Francesco Carletti (page  31), Florentine father and son merchants who sailed far-flung seas on business.

Enjoy the start of the summer!

What’s in the June Issue of The Florentine

To Remember, To Listen: a summary of Marisa Garreffa’s durational performance at The British Institute

From May 17 to 23, Perth-born performance artist Marisa Garreffa stitched together stories from the international community of Florence in a collective act of healing. 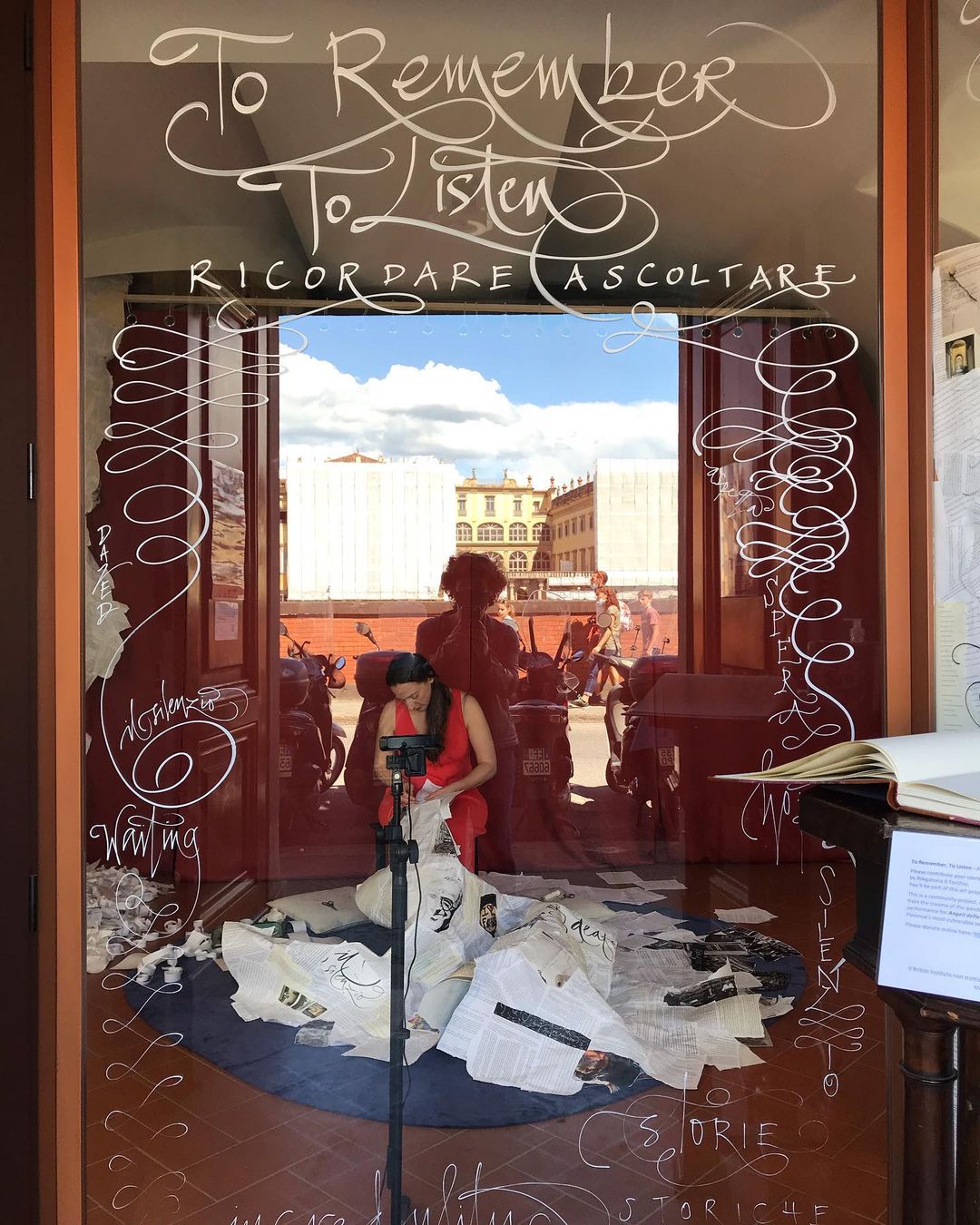 Italy continues to ease restrictive measures as the country shows rapidly falling infection num- bers and the vaccine effort accelerates. At the time of going to press, over a third (nearly 22 million) of Italians had received the first dose and nearly a fifth (11 million) had been fully vaccinated. At this pace, herd immunity in Italy is likely to be reached by early September (source: Il Sole 24 Ore). Tuscany is looking to gain “white zone” status by June 21, the loosest tier of restrictions, which have yet to be stipulated. 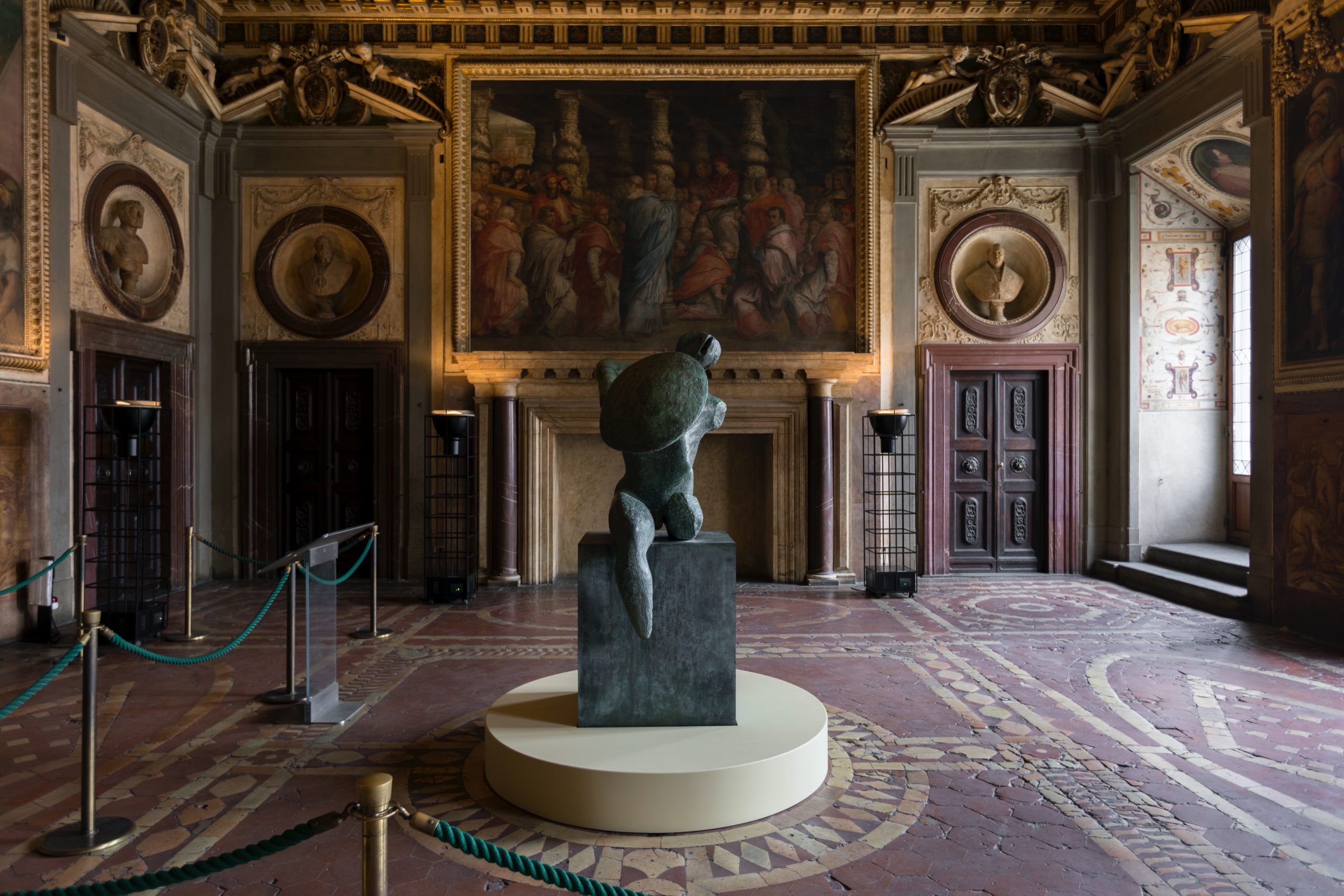 Henry Moore’s Warrior with Shield has taken up temporary residence in the Sala Leone X of the Palazzo Vecchio. The project undertaken by the Museo Novecento comes ahead of the 50th anniversary in 2022 of Moore’s monumental sculptural exhibition held at Forte di Belvedere in 1972.

Observing Dante at the Duomo 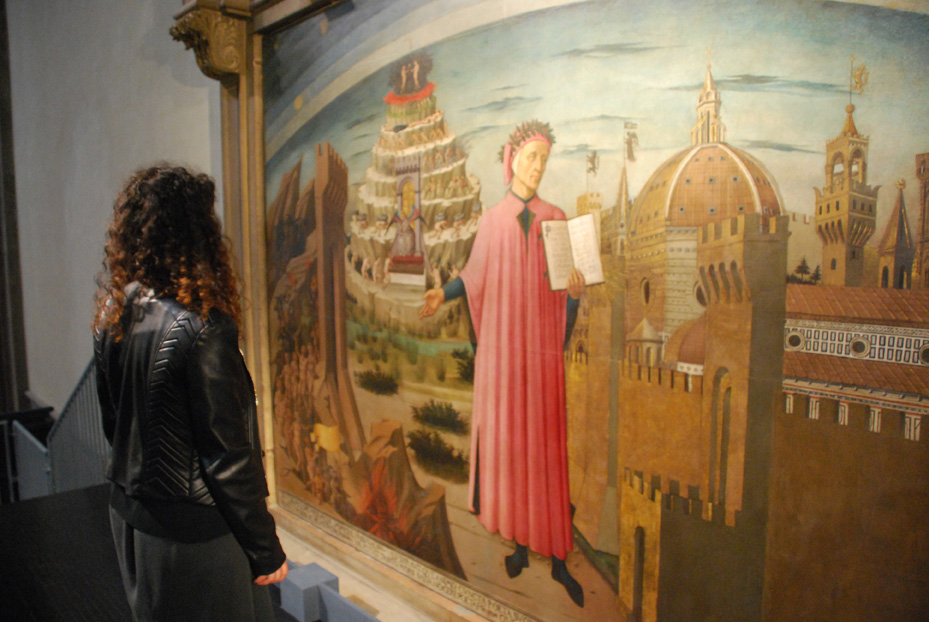 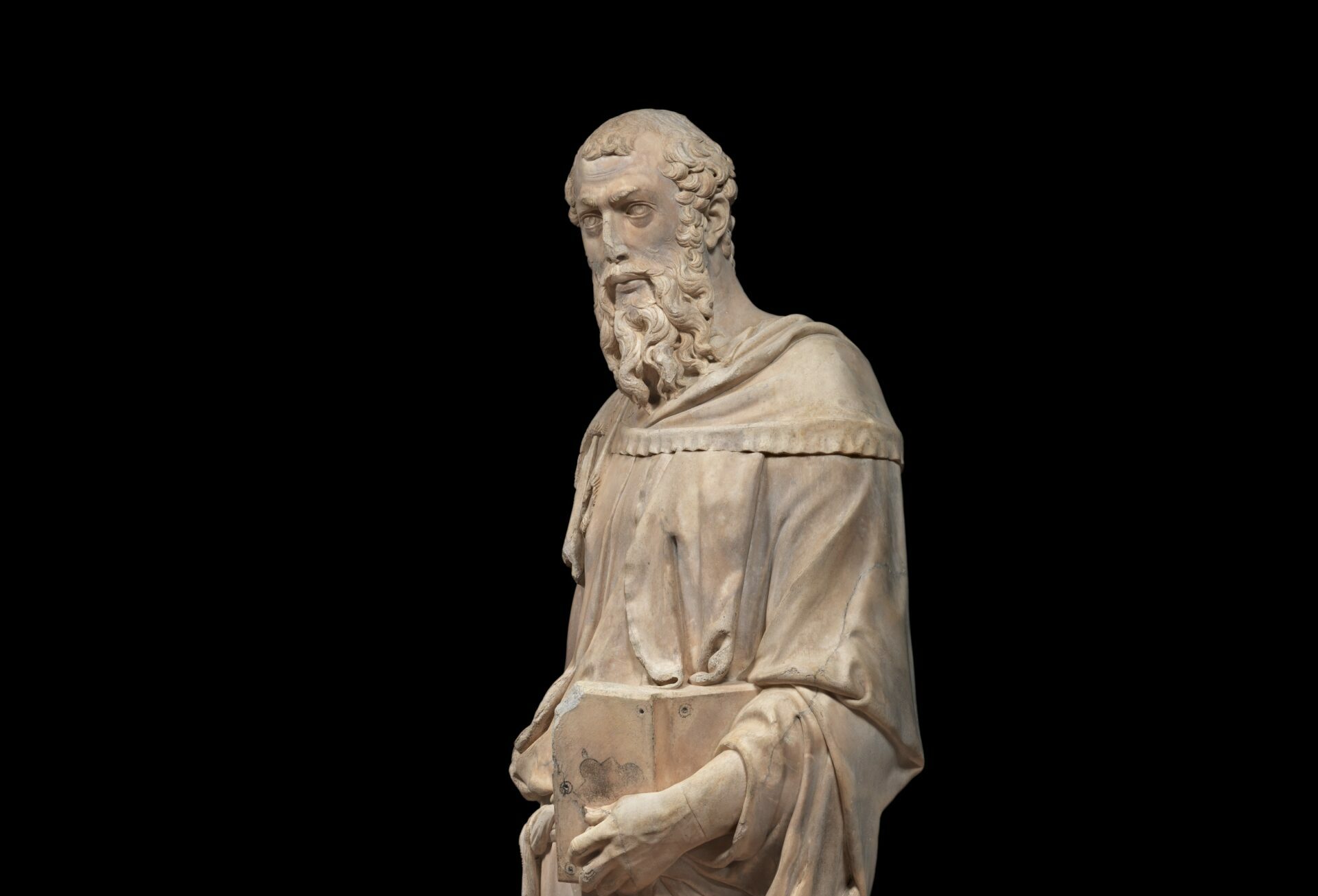 Donatello’s San Marco at the Orsanmichele Museum on via dell’Arte della Lana has been restored. The Renaissance genius’s early masterpiece received much-needed attention thanks to a collaboration between the Bargello Museums and the Opificio delle Pietre Dure, with the financial support of Friends of Florence. 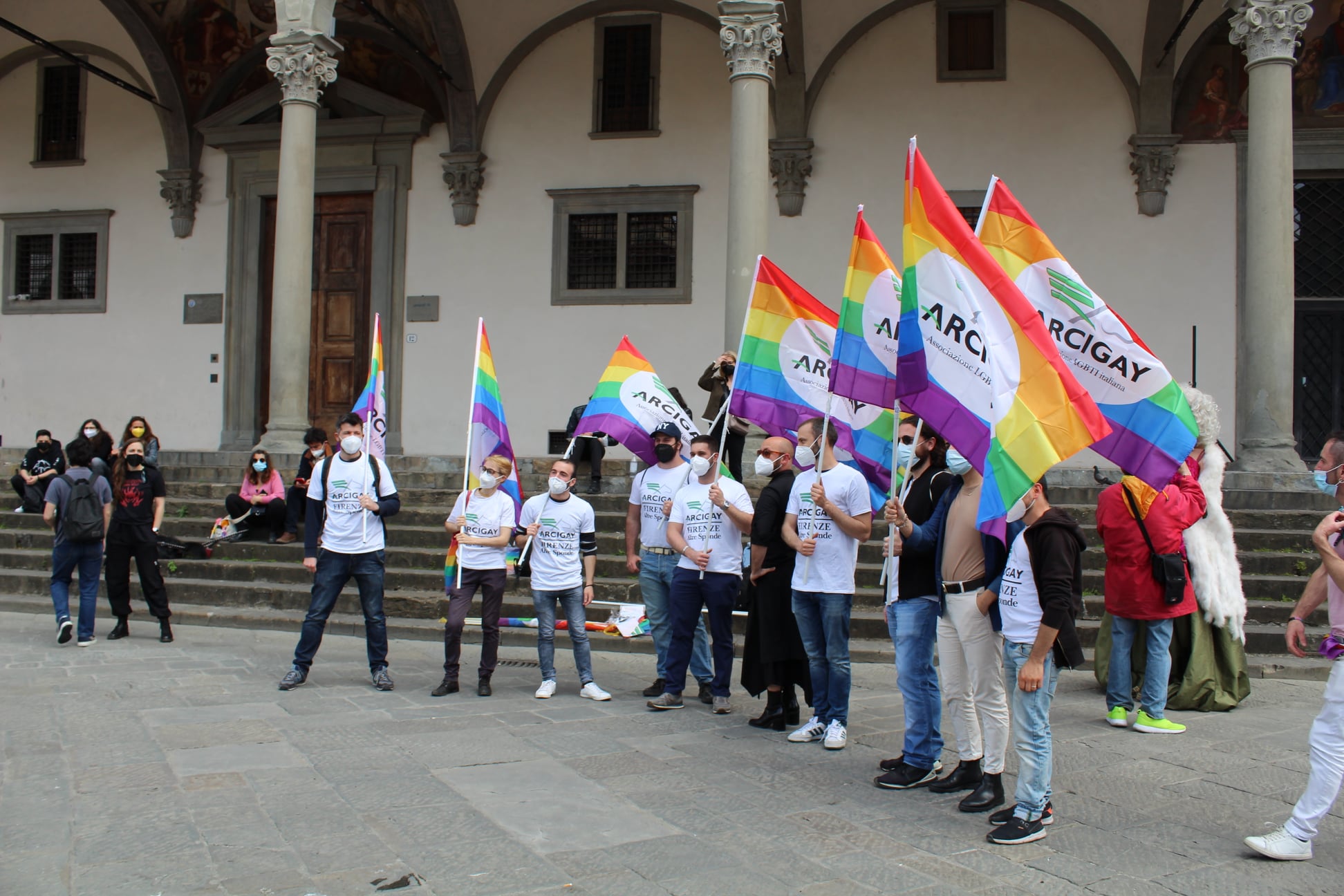 The DDL Zan: what it is + why it’s necessary (Vincenzo D’Angelo)

Italy’s LGBTQI+ community is once again at the center of the national political debate and continues to fight for the rights of all, without exceptions.

The Florence branch of ArciGay, the leading Italian non-profit organization for the LGBT+ community, opens its new headquarters at Circolo Arci Novoli (via di Novoli 9R) on June 4.

There’s the new all-American show at Palazzo Strozzi, the Florence Dance Performing Arts Festival in the cloisters at Santa Maria Novella, a celebration of craftsmanship at Artigianato e Palazzo in the Corsini Gardens, and a major exhibition by American-Italian multidisciplinary artist Simone Forti at Prato’s Centro Pecci, and much more! Plus, the international community of Florence is getting creative again with plenty of plans for the month ahead. 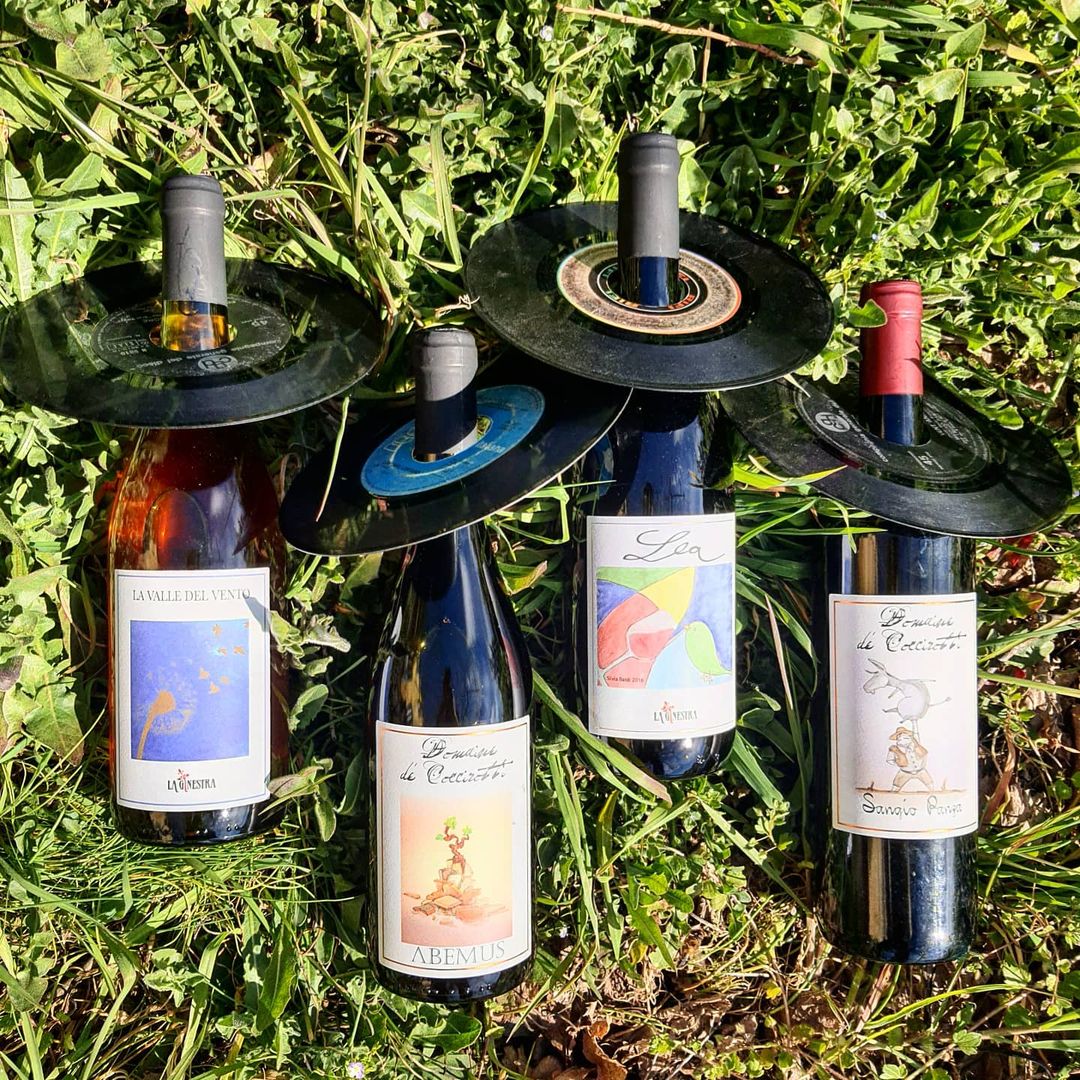 Osteria Torre a Cona is the gastronomic destination of the day, set around the eighteenth-century lemon house on the eponymous wine estate near Florence. 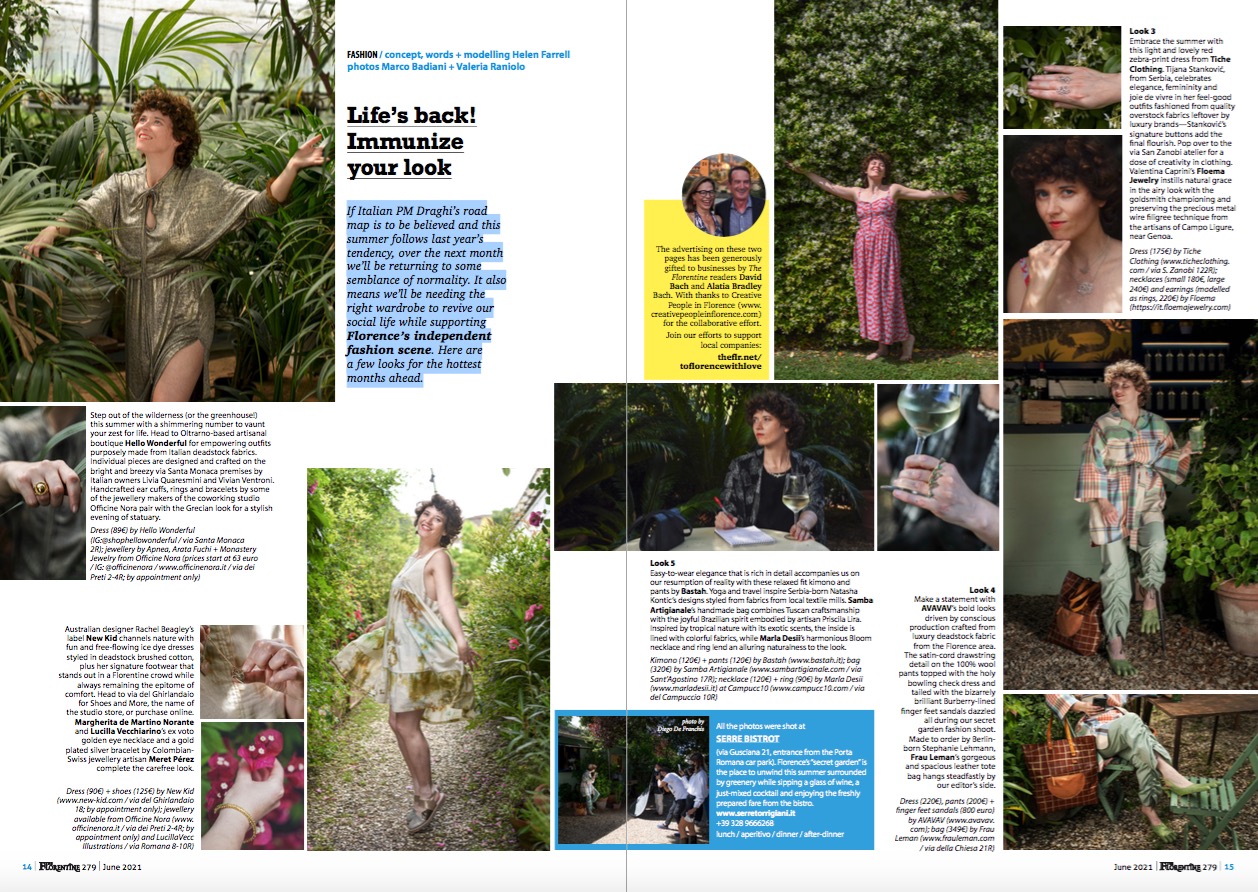 If Italian PM Draghi’s road map is to be believed and this summer follows last year’s tendency, over the next month we’ll be returning to some semblance of normality. It also means we’ll be needing the right wardrobe to revive our social life while supporting Florence’s independent fashion scene. Check out The Florentine‘s first ever fashion shoot, featuring looks by AVAVAV, Bastah, New Kid, Hello Wonderful and Tiche Clothing, with jewellery by Floema, Campucc10 and Officine Nora, plus bags by Samba Artigianale and Frau Leman. 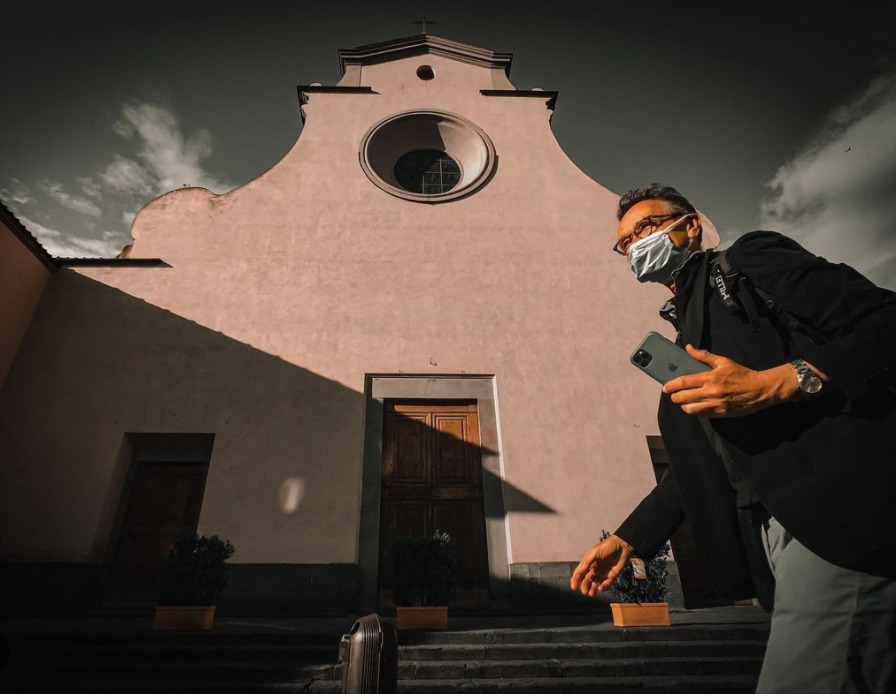 The International School of Florence (ISF) becomes a regular presence on the pages of The Florentine with a column with news, events and community outreach. The inaugural article reveals all about a new partnership with the Fondazione Palazzo Strozzi to take learning out of the classroom and into the city.

Over the past two years, Black History Month Florence initiated a dialogue with Jordan Anderson, a multifaceted, young creative based in Milan.

Stephanie Martin left Belfast in Northern Ireland for Siena, travelling with an Englishman. Together they sold olive oil on an idyllic 12 acres of land, living the Tuscan dream. A trip to the university where her partner wanted to study Italian was to change all of that. “He found an ad on the university noticeboard, saying that a locally based Irish folk band was in search of a musician. I called this person, Giulio Putti, and now we’ve been married for years and have two children!” 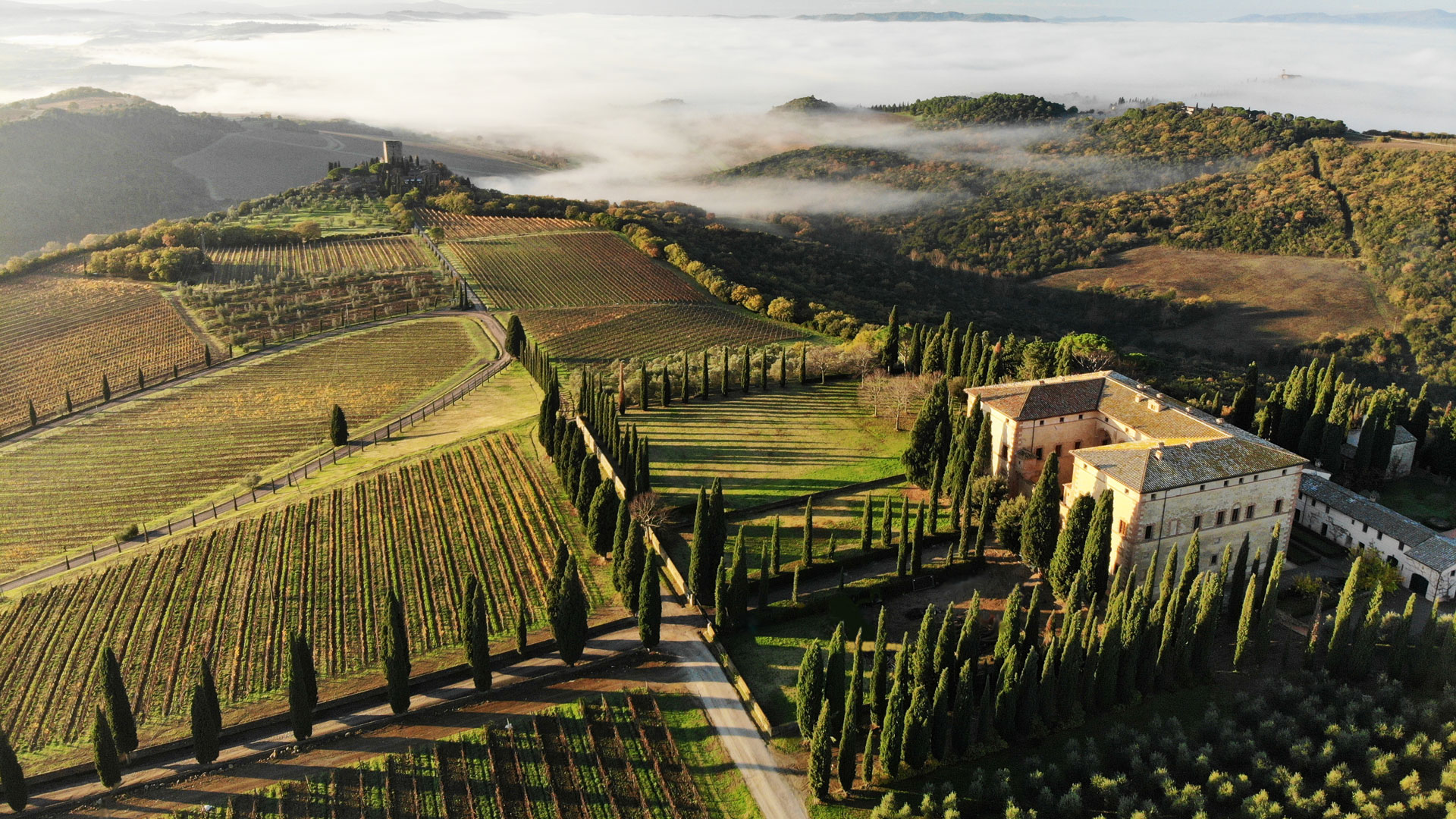 Glasses chink as the concert bell chimes and the centuries- old gates peel back into the terracotta-tiled courtyard. It’s a magical introduction to the evening of music that awaits at the inaugural Argiano Baroque Music Festival held in the Montalcino countryside this summer.

Fanfara Station: music all over the map (Michelle Davis)

It’s a sunny afternoon in May when The Florentine virtually meets up with Fanfara Station band members Marco Dalmasso, Charles Ferris and Marzouk Mejri, the larger-than-life trio that is bringing the power of a brass band and electronics to North African vocals and percussions.

A year-long May of music (Hershey Felder)

The Maggio Musicale Fiorentino is legendary. It takes its name from the age-old Florentine May holidays, when nobility and civilians alike would decorate all of Florence with spring blooms to the floating sounds of musicians playing as they danced down the lungarni and the winding streets of an ancient city, always alive.

Established group Creative People in Florentine starts a new column in The Florentine with a story about Austrian paper art restorer Veronika Wick.

The Artisan Quarter Association tells us all about Giuliana Becattini and her BeGiuls dressmaking atelier on via Romana. 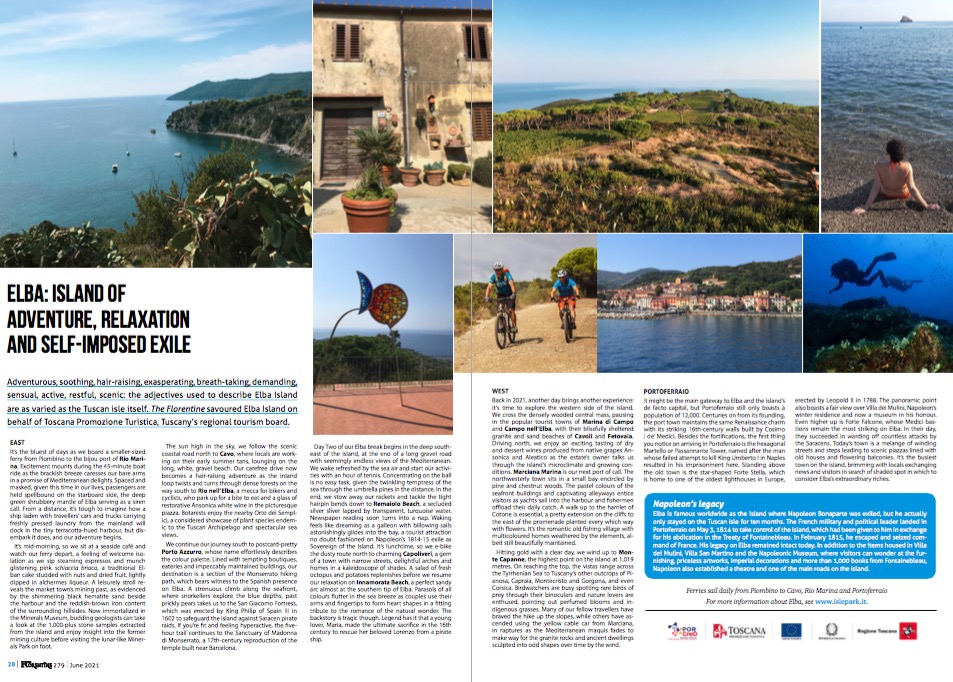 After months spent locked inside, closed off to the idea of museums and crowded tours, now it’s time to get creative and explore Tuscany more thoroughly, viewing the region as an open-air museum. With restrictions on travel, we have had time to reflect on the beauty of our own backyard, while minding the physical footprint we leave behind.

More than fancy dinners or sunset strolls around the Duomo, a day on the road is the epitome of Tuscany’s real dolce vita. It’s a life-affirming experience, with the wind on your skin and freedom of the open road, and nowhere is more picturesque than the Chianti hills at golden hour. Here are three ultimate Vespa day trips.

The son of Antonio Carletti and his wife Lucrezia Macinghi, Francesco Carletti was born in Florence in either 1573 or 1574. His father was a descendant of an old merchant family who traded with Spain, Portugal and their colonies, travelling widely to do so.

Buy the June Issue of The Florentine.