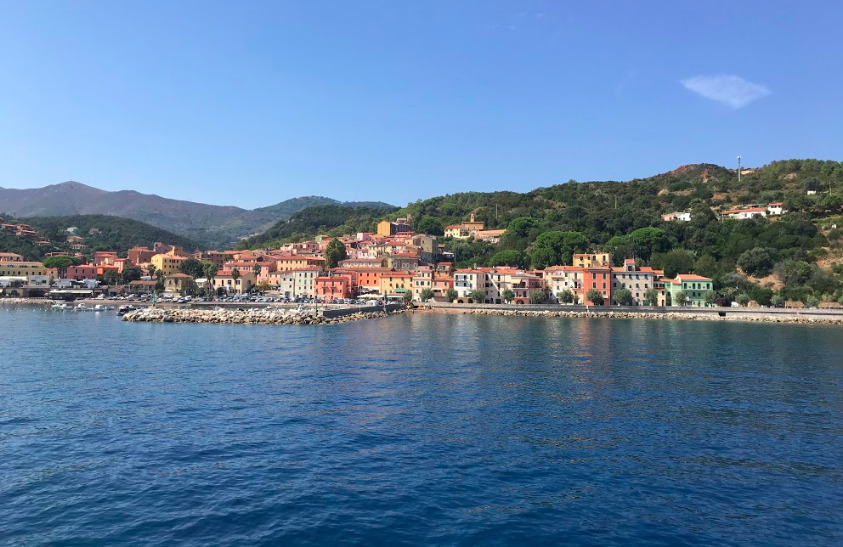 It’s the bluest of days as we board a smaller-sized ferry from Piombino to the bijou port of Rio Marina. Excitement mounts during the 45-minute boat ride as the brackish breeze caresses our bare arms in a promise of Mediterranean delights. Spaced and masked, given this time in our lives, passengers are held spellbound on the starboard side, the deep green shrubbery mantle of Elba serving as a siren call. From a distance, it’s tough to imagine how a ship laden with travellers’ cars and trucks carrying freshly pressed laundry from the mainland will dock in the tiny terracotta-hued harbour, but disembark it does, and our adventure begins.

It’s mid-morning, so we sit at a seaside café and watch our ferry depart, a feeling of welcome isolation as we sip steaming espressos and munch glistening pink schiaccia briaca, a traditional Elban cake studded with nuts and dried fruit, lightly dipped in alchermes liqueur. A leisurely stroll reveals the market town’s mining past, as evidenced by the shimmering black hematite sand beside the harbour and the reddish-brown iron content of the surrounding hillsides. Now immortalized in the Minerals Museum, budding geologists can take a look at the 1,000-plus stone samples extracted from the island and enjoy insight into the former mining culture before visiting the lunar-like Minerals Park on foot. 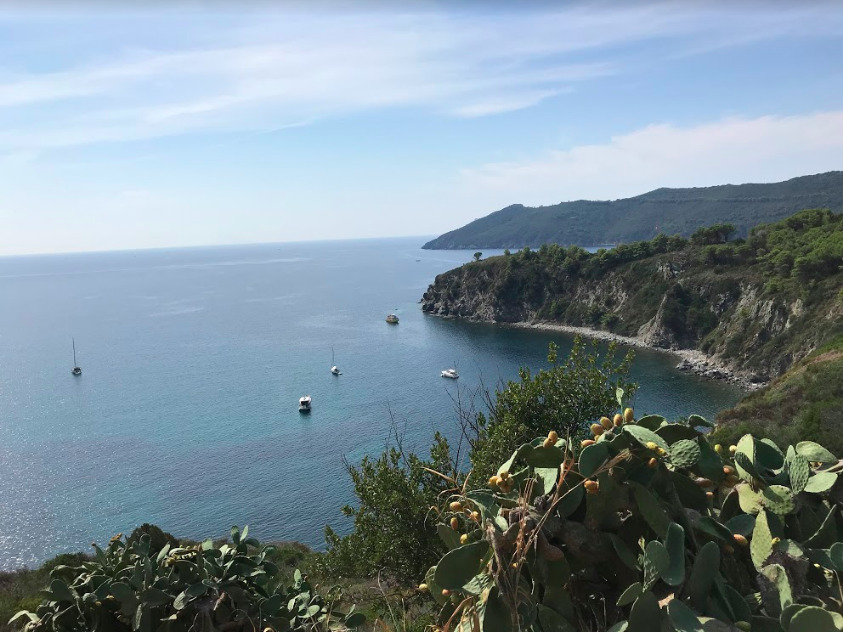 The sun high in the sky, we follow the scenic coastal road north to Cavo, where locals are working on their early summer tans, lounging on the long, white, gravel beach. Our carefree drive now becomes a hair-raising adventure as the inland loop twists and turns through dense forests on the way south to Rio nell’Elba, a mecca for bikers and cyclists, who park up for a bite to eat and a glass of restorative Ansonica white wine in the picturesque piazza. Botanists enjoy the nearby Orto dei Semplici, a considered showcase of plant species endemic to the Tuscan Archipelago and spectacular sea views.

We continue our journey south to postcard-pretty Porto Azzurro, whose name effortlessly describes the colour palette. Lined with tempting boutiques, eateries and impeccably maintained buildings, our destination is a section of the Monserrato hiking path, which bears witness to the Spanish presence on Elba. A strenuous climb along the seafront, where snorkellers explore the blue depths, past prickly pears takes us to the San Giacomo Fortress, which was erected by King Philip of Spain III in 1602 to safeguard the island against Saracen pirate raids. If you’re fit and feeling hyperactive, the five-hour trail continues to the Sanctuary of Madonna di Monserrato, a 17th-century reproduction of the temple built near Barcelona. 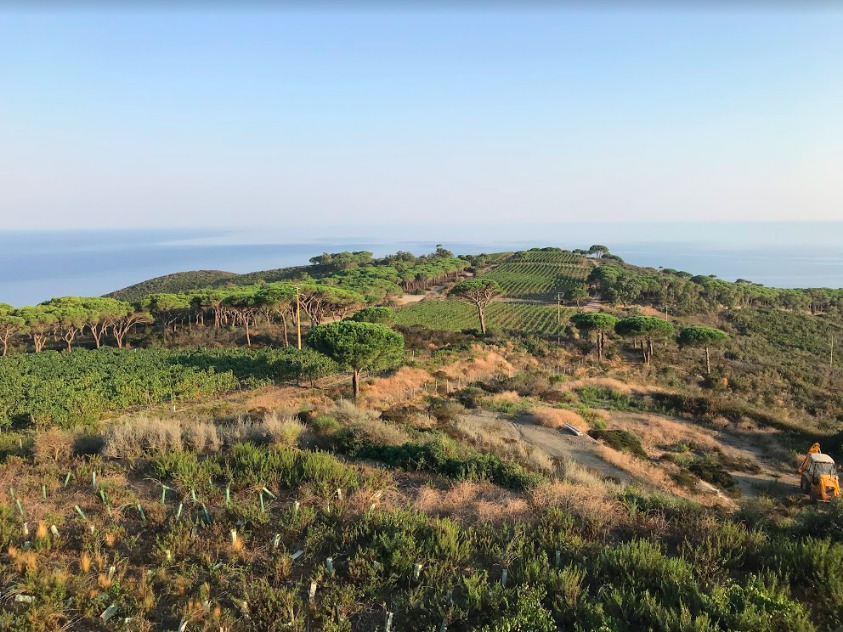 Day Two of our Elba break begins in the deep southeast of the island, at the end of a long gravel road with seemingly endless views of the Mediterranean. We wake refreshed by the sea air and start our activities with an hour of tennis. Concentrating on the ball is no easy task, given the twinkling temptress of the sea through the umbrella pines in the distance. In the end, we stow away our rackets and tackle the tight hairpin bends down to Remaiolo Beach, a secluded silver sliver lapped by transparent, turquoise water. Newspaper reading soon turns into a nap. Waking feels like dreaming as a galleon with billowing sails astonishingly glides into the bay, a tourist attraction no doubt fashioned on Napoleon’s 1814-15 exile as Sovereign of the Island. It’s lunchtime, so we e-bike the dusty route north to charming Capoliveri, a gem of a town with narrow streets, delightful arches and homes in a kaleidoscope of shades. A salad of fresh octopus and potatoes replenishes before we resume our relaxation on Innamorata Beach, a perfect sandy arc almost at the southern tip of Elba. Parasols of all colours flutter in the sea breeze as couples use their arms and fingertips to form heart shapes in a fitting tribute to the romance of the natural wonder. The backstory is tragic though. Legend has it that a young lover, Maria, made the ultimate sacrifice in the 16th century to rescue her beloved Lorenzo from a pirate ship. 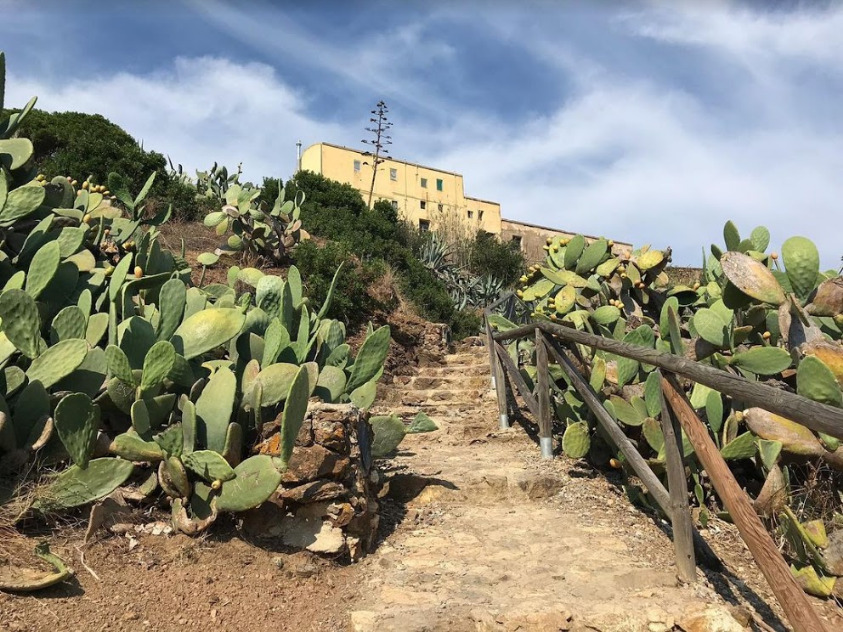 Back in 2021, another day brings another experience: it’s time to explore the western side of the island. We cross the densely wooded central mass, pausing in the popular tourist towns of Marina di Campo and Campo nell’Elba, with their blissfully sheltered granite and sand beaches of Cavoli and Fetovaia. Driving north, we enjoy an exciting tasting of dry and dessert wines produced from native grapes Ansonica and Aleatico as the estate’s owner talks us through the island’s microclimate and growing conditions. Marciana Marina is our next port of call. The northwesterly town sits in a small bay encircled by pine and chestnut woods. The pastel colours of the seafront buildings and captivating alleyways entice visitors as yachts sail into the harbour and fishermen offload their daily catch. A walk up to the hamlet of Cotone is essential, a pretty extension on the cliffs to the east of the promenade planted every which way with flowers. It’s the romantic old fishing village with multicoloured homes weathered by the elements, albeit still beautifully maintained. 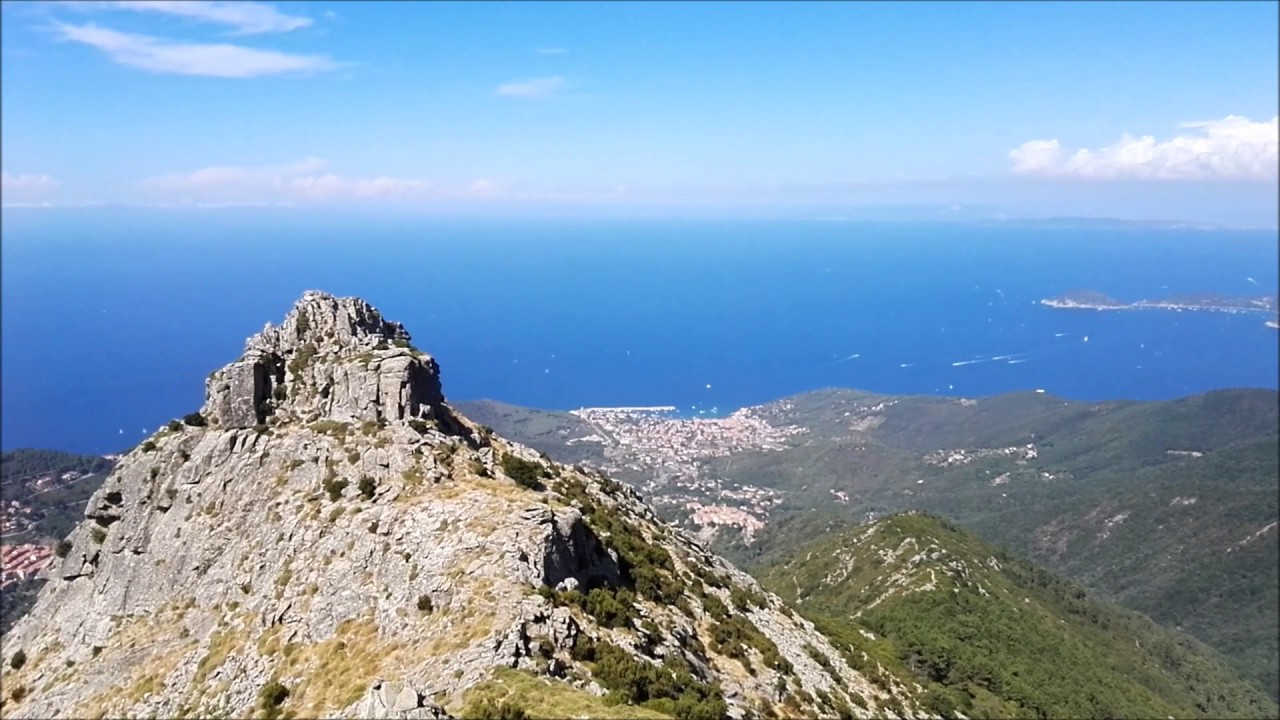 Hitting gold with a clear day, we wind up to Monte Capanne, the highest point on the island at 1,019 metres. On reaching the top, the vistas range across the Tyrrhenian Sea to Tuscany’s other outcrops of Pianosa, Capraia, Montecristo and Gorgona, and even Corsica. Birdwatchers are busy spotting rare birds of prey through their binoculars and nature lovers are enthused, pointing out perfumed blooms and indigenous grasses. Many of our fellow travellers have braved the hike up the slopes, while others have ascended using the yellow cable car from Marciana, in raptures as the Mediterranean maquis fades to make way for the granite rocks and ancient dwellings sculpted into odd shapes over time by the wind. 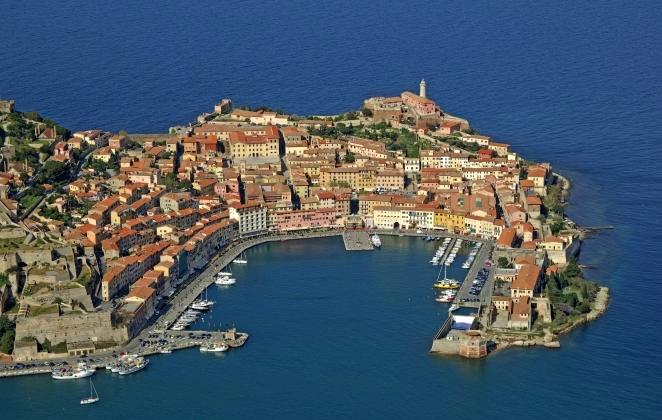 It might be the main gateway to Elba and the island’s de facto capital, but Portoferraio still only boasts a population of 12,000. Centuries on from its founding, the port town maintains the same Renaissance charm with its striking 16th-century walls built by Cosimo I de’ Medici. Besides the fortifications, the first thing you notice on arriving in Portoferraio is the hexagonal Martello or Passannante Tower, named after the man whose failed attempt to kill King Umberto I in Naples resulted in his imprisonment here. Standing above the old town is the star-shaped Forte Stella, which is home to one of the oldest lighthouses in Europe, erected by Leopold II in 1788. The panoramic point also boasts a fair view over Villa dei Mulini, Napoleon’s winter residence and now a museum in his honour. Even higher up is Forte Falcone, whose Medici bastions remain the most striking on Elba. In their day, they succeeded in warding off countless attacks by the Saracens. Today’s town is a melange of winding streets and steps leading to scenic piazzas lined with old houses and flowering balconies. It’s the busiest town on the island, brimming with locals exchanging news and visitors in search of shaded spot in which to consider Elba’s extraordinary riches. 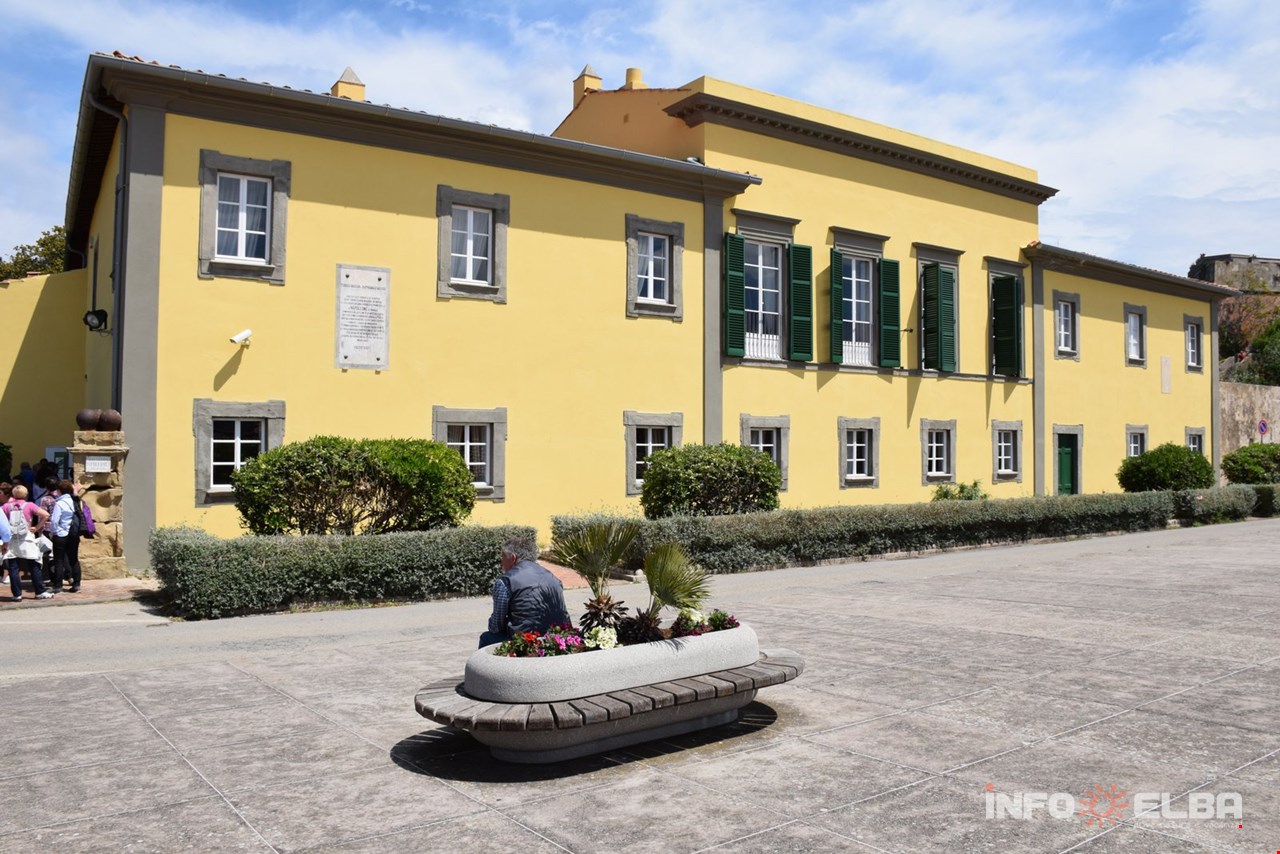 Elba is famous worldwide as the island where Napoleon Bonaparte was exiled, but he actually only stayed on the Tuscan isle for ten months. The French military and political leader landed in Portoferraio on May 3, 1814 to take control of the island, which had been given to him in exchange for his abdication in the Treaty of Fontainebleau. In February 1815, he escaped and seized command of France. His legacy on Elba remained intact today. In addition to the items housed in Villa dei Mulini, Villa San Martino and the Napoleonic Museum, where visitors can wonder at the furnishing, priceless artworks, imperial decorations and more than 1,000 books from Fontainebleau, Napoleon also established a theatre and one of the main roads on the island.